After big win at UFC Vegas 19, what’s next for Tom Aspinall? 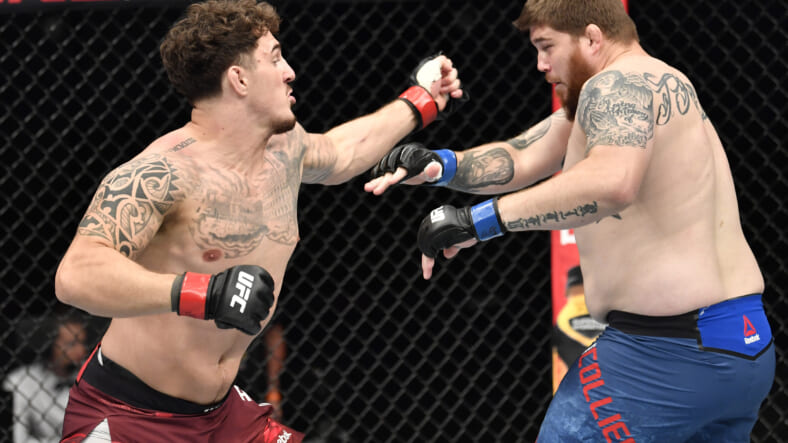 This past weekend at UFC Vegas 19 was a card of the heavyweights. Out of the six main card matchups, half took place in the heavyweight division. The fight that opened the card was one that a lot of folks were paying attention to.

One of the best prospects in the division, Tom Aspinall (10-2), took on former UFC heavyweight champion, Andrei Arlovski (30-20, 2 NC). The matchup was incredibly intriguing and had a great story behind it.

UFC 70 took place in England and a young Tom Aspinall was in attendance. He was just a kid and he got to witness Andrei Arlovski fight Fabricio Werdum in the co-main event. Watching Arlovski made Aspinall want to become a mixed martial artist.

Fast forward 14 years and Aspinall was fighting the very man who inspired him to become a professional fighter. Sure, Arlovski is not the same anymore at 42 years old, but he had just won two straight in 2020 over top heavyweight prospects.

The fight was going to be a tough test for Aspinall. Aspinall is so exciting due to how well rounded he is. He’s known for his incredible striking, however, his ground game is sensational and he showed that off at UFC Vegas 19.

In the first round, Aspinall hurt Arlovski on the feet. For a minute, it looked like he was going to get his third straight first round knockout in the UFC. However, Arlovski stayed composed and the fight continued.

In the second round, after some back and forth on the feet, Aspinall shot in for a beautifully timed takedown. While along the fence, Arlovski tried to stand and Aspinall locked in a rear-naked choke for the win. If you would’ve blinked, you would’ve missed Aspinall’s third UFC finish.

What’s next after UFC Vegas 19?

Aspinall made his debut with the UFC back in July and he’s already 3-0 with three stoppages. As mentioned, he’s got sensational striking and he just showed how slick he is on the ground. He looks to be the total package.

After the fight was over, Aspinall called for one of the other heavyweight winners on the card. He said he knows he wouldn’t get the winner of the main event, but any other winner would do as he builds up.

Personally, I think that one of the other winners from UFC Vegas 19 makes for the perfect fight. That winner would be Chris Daukaus (11-3). Daukaus made quick work of top ten contender, Alexey Oleynik on Saturday night.

Like Aspinall, Daukaus is now 3-0 with three stoppages in his UFC career. Daukaus earned a contract on The Contender Series and he hasn’t looked back. Both of these men look like great prospects for the heavyweight division and I would love to see them square off.