After another win at UFC Vegas 25, what’s next for Merab Dvalishvili? 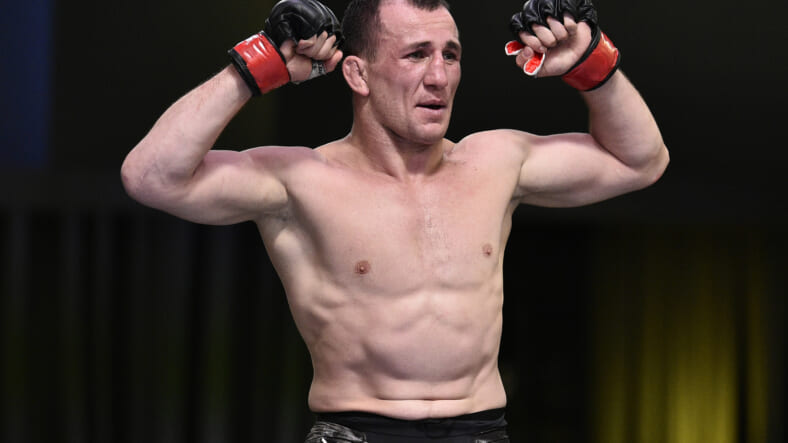 This past Saturday at UFC Vegas 25, a good bantamweight contest kicked off the main card. Merab Dvalishvili (13-4) took on Cody Stamann (19-4-1). These two were paired up twice before, but the fight fell through both times.

Finally, at UFC Vegas 25 we saw the two of them go head-to-head. Stamann was looking to bounce back after just his second loss in the octagon. Dvalishvili on the other hand was looking to pick up his sixth straight win in the UFC.

When Dvalishvili made his octagon debut a few years ago, it didn’t start well. Dvalishvili lost his first two fights inside the octagon. However, since that second loss, Dvalishvili has completely turned things around.

Dvalishvili pushes a pace that very few can match and he’s showing that he can be a handful in the UFC‘s bantamweight division. I was so intrigued by the grappling of these two considering how good of wrestlers they both are.

Throughout the fight, we saw the wrestling of each man cancel the other out at times. However, Dvalishvili was still able to get Stamann down several times. He had issues keeping him on the ground, but he was relentless with his attacks.

The activity, the pressure, and the pace that Dvalishvili is a problem for all UFC bantamweights. In the end, Dvalishvili walked away with the unanimous decision victory and now he’s won six straight.

The UFC rankings just updated and Dvalishvili moved up to the eleventh spot in the rankings. Having won six in a row, it’s a tad surprising he didn’t crack the top ten, but he’s right there.

So, what should the UFC do with him next? Well, I really like a potential matchup between Dvalishvili and Pedro Munhoz (19-5, 1 NC). Munhoz just defeated Jimmie Rivera back in February which snapped a two-fight losing streak.

He’s currently ranked eighth in the UFC’s bantamweight division and he needs a quality next opponent. A matchup between Dvalishvili and Munhoz would really tell you a lot about both men.

Considering their spots, whoever would win a potential matchup between the two would be in a great position at 135. Perhaps a top five opponent would be waiting the winner. Dvalishvili needs a step up in competition, and I think Pedro Munhoz is it.