After a disappointing return at UFC Fight Island 7, what’s next for Santiago Ponzinibbio? 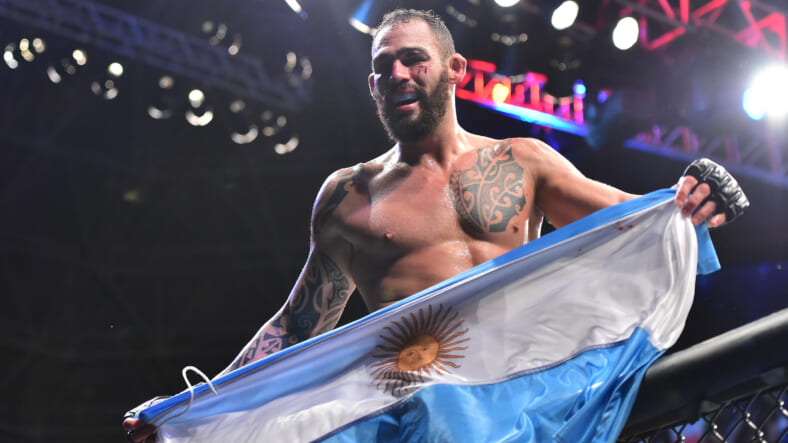 One of the fighters that I was the most excited about seeing at UFC Fight Island 7 was Santiago Ponzinibbio (27-4). Ponzinibbio had been out since November of 2018 with injuries, but he looked like a destroyer before those injuries.

He had won seven straight fights inside the octagon and looked like a guy who could become UFC welterweight champion. The promotion decided to give him Li Jingliang (18-6) in his return fight.

There are some fighters who can come back from long layoffs and not skip a beat. Then there are fighters who return to the UFC with serious ring rust. I was very curious to see where Ponzinibbio would fall on that scale.

One thing I knew is that he was facing an opponent who wasn’t going to let him get comfortable. Li is constantly throwing and constantly pushing forward which would throw Ponzinibbio right back into the fire after a couple of years off.

I figured Ponzinibbio would be able to land a big counter and win by knockout. Well, the exact opposite happened at UFC Fight Island 7. Ponzinibbio was extremely gun shy and he overextended on a right hand and got caught with a flush left hook that put him out.

It is extremely clear that Ponzinibbio was just not comfortable in his UFC return. He didn’t look confident and he looked extremely hesitant. He looked like a fighter who had been off for a couple of years.

To beat a guy like Li, he needed to be on his game and sharp. He wasn’t and he was knocked out as a result. So what does the UFC do with Ponzinibbio after this loss? Well, in reality they need to get him back in there as soon as possible.

Normally fighters want to take some time off after a knockout loss, but Ponzinibbio has been off enough. The best thing for him is to try and get right back in there so he can get going again. The guy has so much ability and talent to just waste on the sidelines.

The UFC could go a couple of different ways with Ponzinibbio. On one hand, they could give him someone like Robbie Lawler (28-15, 1 NC). Sure, Lawler isn’t the same guy he used to be. However, he’s still got a big name with the fans.

Sure, it’s not the sexiest fight in the world. However, it’s a fight that Ponzinibbio should be able to win. The UFC has options, but they need to give him a favorable matchup in his next fight.