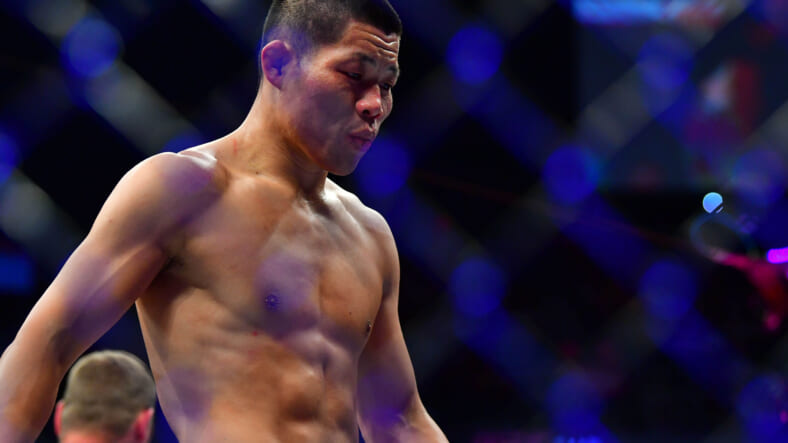 One of the more intriguing matchups at UFC Fight Island 7 was the welterweight contest between Santiago Ponzinibbio (27-3) and Jingliang Li (17-6). For Ponzinibbio, this was his first fight back in the UFC in over two years.

However, multiple injuries have kept Ponzinibbio on the shelf for the last couple of years. I was very intrigued to see how he would look in this matchup especially given the style of opponent that the UFC gave him.

Jingliang Li is not the type of opponent you get when you want to ease into your return. Li is a guy who loves to come forward non-stop and throw everything at you. Whether it’s hooks, kicks, or takedown attempts, Li will try it. This fight was promised to deliver on the action.

The UFC Fight Island 7 welterweight contest got underway with a touch of the gloves. Ponzinibbio opened up with a little pressure on Li looking for low kicks. Li was throwing a lot of feints trying to gauge Ponzinibbio.

The first clean shot lands a minute in and it was a left hook from Li. Ponzinibbio took it well, but he was looking slightly tentative. Li started to go to work with throwing hooks and mixing in some low kicks.

Ponzinibbio tried to work his way inside behind his jab, however, he wasn’t throwing much. Ponzinibbio’s UFC layoff looks like it was impacting him early. Two minutes left in the round and Li lands a solid straight right hand on Ponzinibbio.

Ponzinibbio kept with the pressure and was beginning to open up a little more with his leg kicks. However, Li was doing a good job of responding. Li was throwing and landing a lot more than Ponzinibbio in the first round. Out of no where, Li lands a massive left hook and puts Ponzinibbio to sleep! Wow!