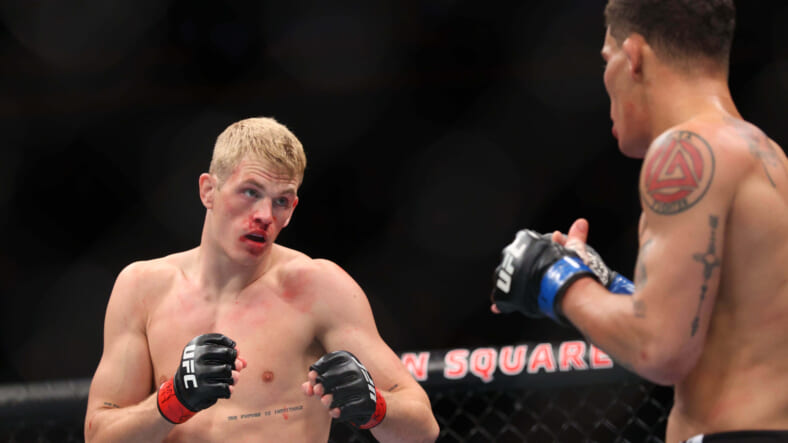 If you’re looking for UFC prospects that have the ‘It’ factor, look no further than Ian Garry (8-0). Garry is another Irishman who is cut from a very similar cloth as his hero, Conor McGregor. With Garry, ‘The Future’ is looking bright for Irish MMA.

Garry is a long and athletic welterweight who stands 6’3 and made his professional MMA debut back in 2019. He has a striking background and his striking skill has been on full display throughout the early part of his career.

He got his start with Cage Warriors and rose to the top of the promotion. He became the welterweight champion back in June. Once he became champion, the UFC decided it was time to bring him into the Big Show.

He made his debut back in November at UFC 268 against Jordan Williams. Garry had the bright lights of Madison Square Garden on him as he made his debut. In the same building where his hero became the first two-division UFC champion, Garry shined.

Now, it wasn’t a completely flawless debut at UFC 268. Garry was bloodied and he did take some good shots against Williams. However, he needed to be tested and Williams did just that. Garry admitted to being the victim of the moment just a bit.

Near the very end of the first round, Garry landed a big step-back right hand that put Williams down for good. A flawless shot that Conor McGregor was proud of and with that, Garry’s UFC career got off to a great start.

It’ll be really interesting to see how the UFC brings him along this year. I would expect him to get a step up in competition for his next fight, but I wouldn’t expect it to be a drastic one. Perhaps, someone who can test his grappling skills.

In looking at the welterweight division, Mickey Gall (7-4) could be someone of interest for Garry’s next UFC appearance. Dhiego Lima (15-9) could also be a choice. Someone of that nature should and is expected to be next for Garry.

If he’s able to win in another standout way, expect another step up. I wouldn’t expect Garry to be in title contention at the end of 2022. Keep in mind, this is the same division as UFC star prospect Khamzat Chiamev. Garry is no where close to Chimaev at this time.

However, he can get there with time. Let’s watch how this year plays out and if it plays out the way the UFC wants, they have a budding new star from Ireland.