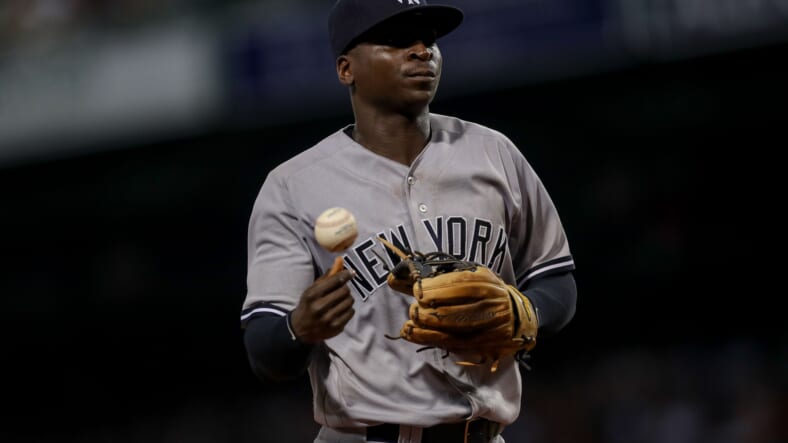 The New York Yankees are notorious for having a stacked lineup and to have a deep farm system. As it was seen this season, they called up guys that consistently contributed to the Major League team like it was nothing. With that being said, they have a lot of talent being buried in their organization.

One of the biggest question marks for the roster next season, Didi Gregorius is believed by many that he most likely won’t be the Yankee shortstop next season. It’s believed that Gleyber Torres showed enough at shortstop this season that the Yankees could make him the starting shortstop.

Emotionally, this hurts. Logically, it kind of makes sense. Gregorius just built himself in the Bronx and is loved by the fans. However, it does make sense that Torres could be the starting shortstop.

There’s no word on where Gregorius is going to land next season, but any decision the Yankees make will be justifiable.

Despite his success at the beginning of the regular season, nobody feels more buried in the Yankee organization more than Clint Frazier. Behind stars, Aaron Judge and Giancarlo Stanton, the only place Frazier would fit in the Yankee lineup would be in the DH role.

The New York Yankees definitely know that Frazier has talent. If they didn’t think so, they would’ve traded him away in the July 31st trade deadline this season. With that being said (given that the outfield stays the same), Frazier would still be buried behind Stanton, Judge, Hicks, and there’s even an argument for Mike Tauchman.

It’s very likely that the Yankees use Frazier in order to get better pitching. He’s a young talent that any team would love to have in their organization. He’s far from his peak and he has the potential to be the leader in any lineup.

After being traded to the Yankees in mid-June, the 36-year-old veteran batted .249 with 13 home runs and 37 runs batted in. Edwin Encarnacion had an unbelievable ALDS performance and then went ice cold in the ALCS.

The Yankees have a decision to make: they could bring him back for the 2020 season and pay him $20 million, or pay him a $5 million dollar buyout to let him go.

I think the Encarnacion trade was a one-year deal for the Yankees. It was a promising pickup, getting a veteran that has playoff experience and can pop 30+ home runs in a season. Good move for one season, but not for multiple years.

After being picked up by the Yankees for a mere $25,000 dollars, Cameron Maybin picked up the slack that was left by the injured starters. He played in 82 games, batting .285 with 11 homers and 32 runs batted in.

It seems that Maybin already knows that he won’t be returning next season. This tweet two days after the Yankees heart-breaking loss to the Astros in Game 6 of the ALCS says it all:

It didn’t end as we had hoped, but I’m extremely grateful to the @yankees organization for allowing me the opportunity to wear pinstripes this season, and to the fans for making this journey so special. Big HUG to Yankee Nation. Y’all have a special place in my heart. pic.twitter.com/Vt2deE3Tlv