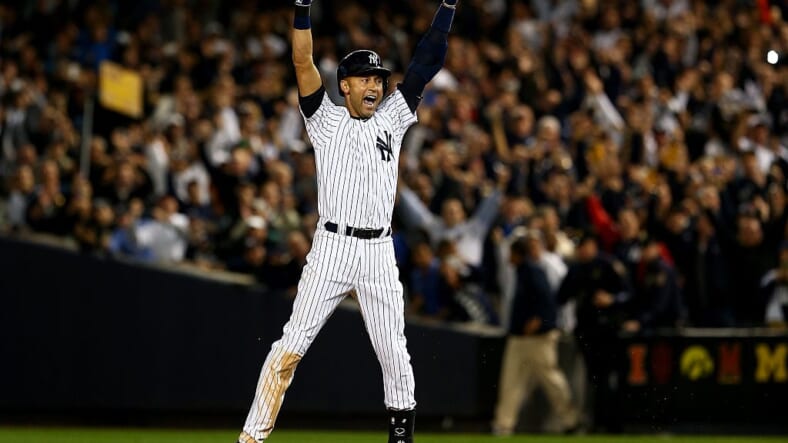 NEW YORK, NY – SEPTEMBER 25: Derek Jeter #2 of the New York Yankees celebrates after a game winning RBI hit in the ninth inning against the Baltimore Orioles in his last game ever at Yankee Stadium on September 25, 2014 in the Bronx borough of New York City. (Photo by Elsa/Getty Images)

Several actors are doing their best to battle coronavirus and minimize the damage of the problematic virus. However, some of the most underrated actions have been taken by first responders, doctors, nurses, and other healthcare professionals that often risk their own wellbeing to protect the society. Those are the real lifesavers. And New York Yankees legend and current Miami Marlins CEO Derek Jeter had a surprise for Dr. Melissa Leber, one of the heroes we are talking about.

Dr. Leber is on the front lines in New York City’s Mount Sinai Hospital’s emergency department, helping one of the cities with the highest infection rates in America. And she happens to be a fan of the former Yankees’ captain.

Jeter called her on Sunday, on Mother’s Day, in what was a very surprising moment for her. He has two small children, and a ESPN reporter was doing a story about her for widely known news show SportsCenter.

The video call, as it turns out, had one special guest that popped up on Leber’s screen: Derek Jeter, Yankees’ postseason legend and the owner of five World Series rings, thanked her for her contributions in the battle against COVID-19.

“I want to be one of the first to reach out and say, ‘Happy Mother’s Day,'” Yankees legend and newly elected Hall of Famer Derek Jeter said. “As an athlete, the word ‘hero’ is thrown around quite a bit, but true heroes are people like you on the front lines, and what you do every day, risking your personal health and the health of those you love the most for the good of others, is something that is pretty remarkable.”

Leber cheered Jeter for his whole career and wanted to eventually meet him in person one day. She even shed a few tears of emotion, meeting her favorite player, and thanked the Yankees legend for being an inspiration for generations.

“I’m hoping to meet you in person at some point,” Jeter said. “We can have some time, maybe you can bring the kids down to Miami or we’ll come up to New York.”

The Captain surprised Dr. Leber to wish her a Happy #MothersDay and to thank her for the work on the frontlines of the COVID-19 pandemic. â¤ï¸