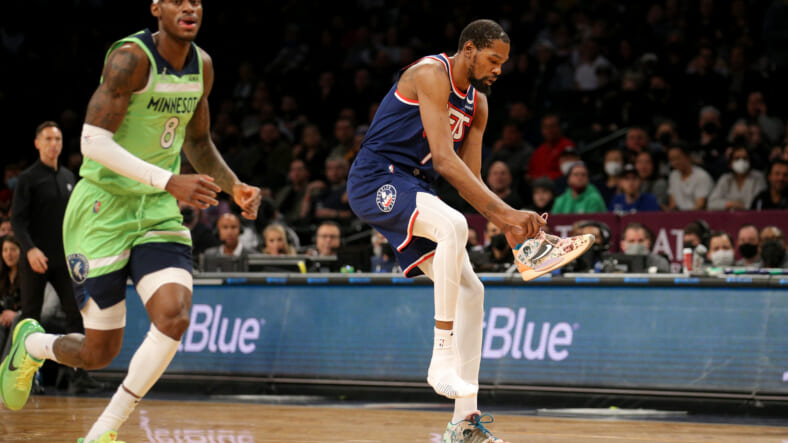 Dec 3, 2021; Brooklyn, New York, USA; Brooklyn Nets forward Kevin Durant (7) puts his sneaker back on after it falls off during the first quarter against the Minnesota Timberwolves at Barclays Center. Mandatory Credit: Brad Penner-USA TODAY Sports

But none of Utah’s acquisitions is an All-Star player or a rising star, which Brooklyn desires in any potential deal for Durant.

Before the Timberwolves pulled the trigger on the blockbuster trade for Gobert, they inquired about the Nets’ asking price for Durant. They balked at the heavy price tag, especially with the 33-year-old Durant about to enter the twilight of his career.

“The Wolves also made several calls to Brooklyn on Kevin Durant, sources said, but the Nets were asking for established All-Stars and a mountain of picks. Minnesota was unwilling to part with either Edwards or Towns in a KD-centered deal, so there was no traction,” Jon Krawczynski wrote.

It will take twice the size of the package that the Timberwolves gave up for Gobert to acquire Durant.

On top of Durant’s list of preferred landing spots are the Miami Heat and Phoenix Suns, who have a bevy of All-Stars on their rosters.

The Heat have three All-Stars: Jimmy Butler, Kyle Lowry and Bam Adebayo, plus rising star Tyler Herro. But Adebayo could not be part of a potential package unless Ben Simmons is traded elsewhere. Collective Bargaining Agreement bylaws do not allow a trade for a player on a designated rookie max extension if one is already on your roster. In this case, the Nets already have one in Simmons.

The Suns have two All-Stars in Devin Booker, Chris Paul and a bevy of young players on the rise in restricted free-agent Deandre Ayton,  defensive stalwart Mikal Bridges and sharpshooter Cam Johnson.

Will the Heat and Suns be bold enough to swing a deal and part ways with some of their core which helped them reach the NBA Finals in the last two seasons?

With Durant locked in a four-year extension deal starting next season, the Nets can take their time until the godfather offer becomes available.