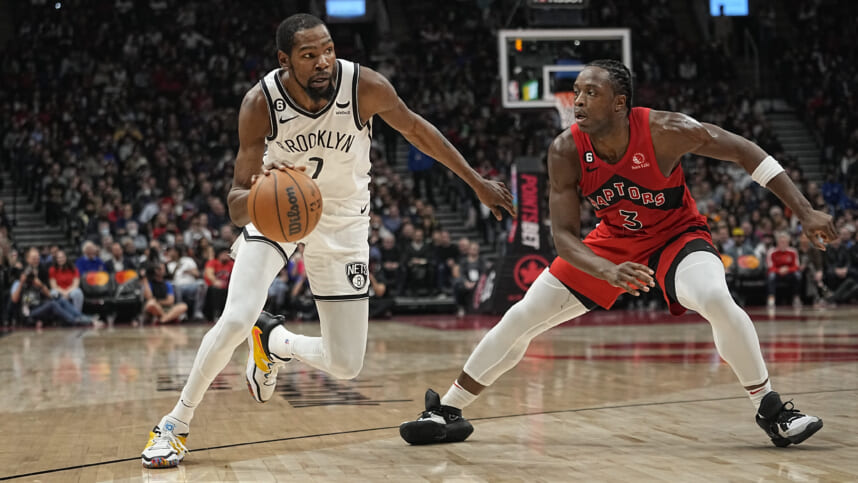 Kevin Durant and Kyrie Irving stamped their marks in the pivotal third quarter fueling the Brooklyn Nets‘ 112-98 bounced-back win in Toronto Wednesday night after an embarrassing loss in Philadelphia the previous night.

Durant passed Kevin Garnett (26,071) for 18th place on the NBA’s all-time scoring list while Irving dropped 19 of his game-high 29 points in the third quarter.

“We’re in the business of winning. We’ll take this one, especially after [Tuesday night] loss, and the whole internet going up in an uproar in terms of how embarrassed we should be, which is true. We just wanted to make sure we paid attention to detail [Wednesday night]. We came out and responded.”

Irving came out smoking after halftime, torching the Raptors with 26, the highest-scoring half by a Nets player this season.

OG Anunoby and the Raptors held Durant to only 12 points on a season-low 10 shots, but it didn’t matter in the end as Irving and the rest of the Nets picked up the slack.

Durant found other ways to help the Nets, especially on the defensive end, swatting away three Raptors shows. He also added seven rebounds and five assists and was a game-high plus-30.

The Nets’ spirited defense produced 10 steals and 11 blocks and translated to a 29-18 advantage in transition points.

All Brooklyn starters were in double figures, with Royce O’Neale chipping in 15 points and seven of the Nets’ 32 assists. O’Neale’s points all came from the three-point zone as the Nets made a season-high 17 3s.