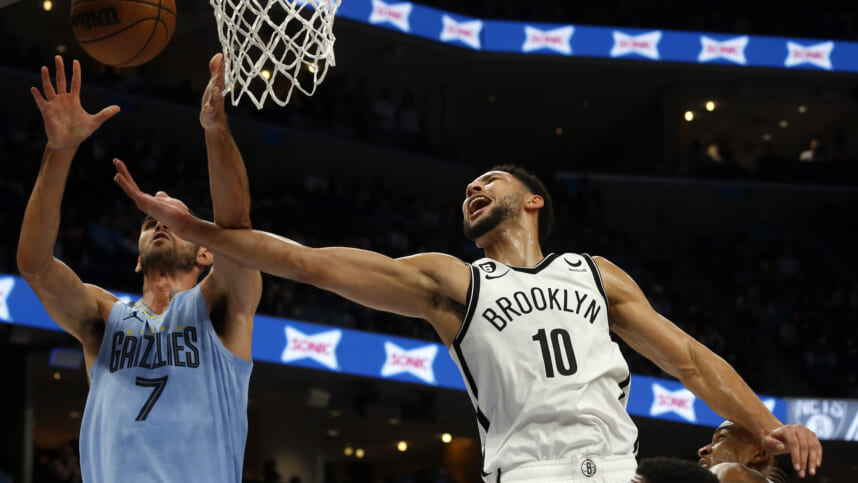 Brooklyn Nets forward Ben Simmons had another disappointing night which ended with what he called a ‘bullshit’ foul.

Simmons fouled out for the second time in three games as the Nets fell to the Memphis Grizzlies, 134-124, on the road Monday night.

The Nets forward took exception to his final foul, in which Grizzlies star Ja Morant baited him by rolling the ball up the court.

Simmons and the whole Nets bench were in disbelief when official J.T. Orr blew his whistle, taking the Nets forward out of the game with still 3:52 left.

“I just saw the play. It wasn’t a foul. [Orr] called it a foul, made a mistake, it is what it is … it’s really frustrating … it’s not a foul, but it was bulls—. It’s frustrating because it’s late game, fourth quarter, it’s a physical, close game. It’s the NBA. It’s not college. It’s not high school. Some people are going to get hit, some people bleed; it’s basketball.”

A dejected Simmons finished the game with only seven points on five shots, three rebounds, eight assists against five turnovers and one steal in 28 minutes. It wasn’t enough to lift the Nets, who drew 37 points each from Kevin Durant and Kyrie Irving.

“I didn’t think that one was a foul, but it is what it is. Ben’s a veteran in this league, so he trusts himself, we trust him and it’s just about bouncing back next game.”

Simmons, averaging 5.7 points, 6.0 rebounds, and 7.0 assists, will have to add the latest debacle to the chip on his shoulder.

His next shot at redemption will be against Giannis Antetokounmpo and the Milwaukee Bucks Wednesday night in what promises to be a playoff-type of game.

Simmons had his best game since his return from a 470-day layoff against the Bucks in the preseason. But in the game that counts, expect Antetokounmpo and the Bucks to level up their intensity which would provide a good test for Simmons.

The Nets are being patient with Simmons.

“I think rust [is what’s hampering Simmons right now]. I just don’t think he’s played a lot of basketball. So he’s just trying to get his game back, his confidence and the familiarity. It’s been 18 months, basically, so that’s a long period of inactivity. For anyone that’s played the game, you know that’s very difficult.”

After the Bucks, the Nets will have their first back-to-back schedule, facing another formidable opponent in Luka Doncic and his Dallas Mavericks at home on Thursday.