Last weekend at UFC Vegas 33, Uriah Hall (17-10) took on Sean Strickland (24-3) in the headliner. Hall was looking for his fifth straight win on his road to a potential shot at the UFC middleweight title.

It’s been a long an interesting run in the UFC for Hall. When Hall was first introduced to fans it was on The Ultimate Fighter. Dana White touted Hall as the scariest fighter that they had ever seen on the show.

Hall had highlight reel knockouts on the show and he looked like he was going to be an immediate contender for the UFC title. However, Hall fought extremely tentative in the finale and lost to Kelvin Gastelum.

Throughout Hall’s career in the UFC, there were never any questions about his talent. All the questions surrounding Hall had to deal with his mental makeup. Uriah Hall has all of the physical talent in the world, he’s just never put it together completely.

At UFC Vegas 33, he was looking to show fans that it was finally his time. However, he was completely flat in the main event. Hall was walked down all night and Sean Strickland ended up winning a very lopsided decision.

What’s next after UFC Vegas 33?

Last Saturday was another one of those moments where you just have to scratch your head when you look at Uriah Hall. From a physical talent standpoint, Hall should have been able to defeat Sean Strickland.

Going on talent alone, you could make the argument that Hall should’ve been a UFC champion already. However, he just seems to run into these mental blocks and fails to show up in some of the bigger moments in his career.

After the loss on Saturday, Hall is now 10-8 in his UFC career. A guy that was touted to be the next great champion has a career record with the promotion at just over 500.

A good fight for Hall after UFC Vegas 33 could be Brad Tavares (19-6). Tavares has won two in a row, but is still a few spots behind Hall in the UFC rankings. That would be a great fight to figure out what Uriah Hall has left. 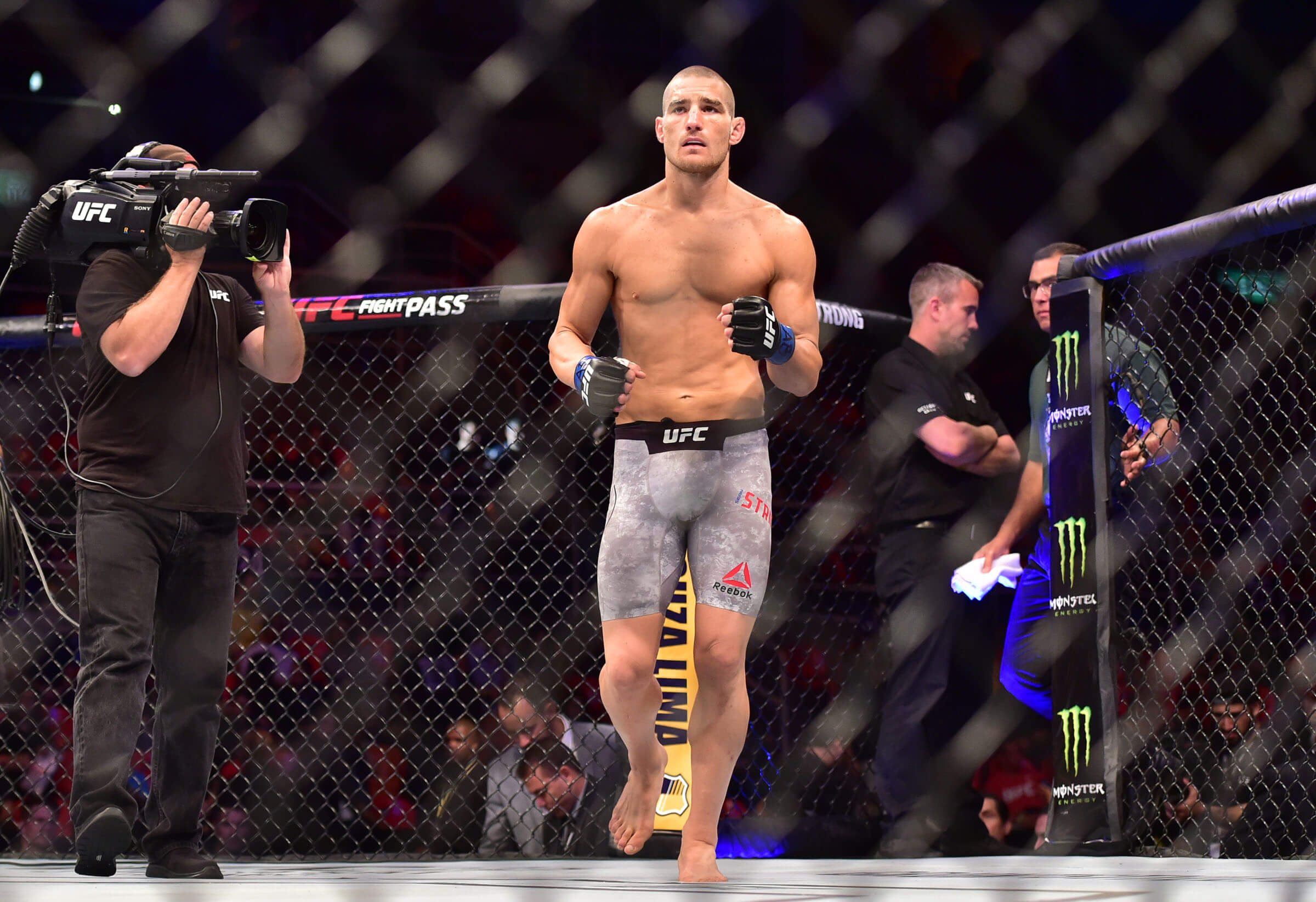 This past Saturday in the main event of UFC Vegas 33, we saw a showdown between ranked middleweights. Former Ultimate Fighter finalist Uriah Hall (17-10) was taking on a former training partner in Sean Strickland (24-3).

Last year, he returned after a two-year layoff due to a motorcycle accident that almost ended his career. He returned last October and took on Jack Marshman. After winning that fight, he took a fight against Brendan Allen just two weeks later.

Strickland stopped Allen in the second round. He followed that up with another win in May and at UFC Vegas 33, Strickland was looking to pick up his fourth win in the last nine months.

What’s next after UFC Vegas 33?

After his dominant win on Saturday night, Strickland jumped up to eighth in the UFC’s middleweight rankings. As mentioned, he’s now won four fights in the last year and he’s ready for a top ten challenge.

With that, who should the UFC pair Strickland up against? In looking at the division, I think a perfect fight for Strickland would be taking on Jack Hermansson (22-6). Hermansson is currently ranked sixth in the middleweight division.

The Joker has been in there with some of the very best that the division has to offer. Since 2018, Hermansson is 6-2 in the UFC. The two losses came against top middleweight contenders Jared Cannonier and Marvin Vettori.

Hermansson is coming off of an impressive win against Edmen Shahbazyan. I think the UFC should put these two against each other and if Strickland wins, you’re looking at a contender who’d be ready to take a shot at the top five. The fight make sense for all parties involved and I think it’s what should be next.

In the main event of UFC Vegas 33, we saw showdown in the middleweight division. Two top eleven contenders battled it out as “Primetime” Uriah Hall (17-9) took on Sean Strickland (23-3).

Entering UFC Vegas 33, Strickland has won four straight. He’s been incredibly active since a two year layoff that started back in 2018. Last October, Strickland made his return and he’s gone 3-0 in the UFC with one stoppage.

The stoppage was an incredibly impressive win over Brendan Allen. In his last fight, he defeated Krzysztof Jotko by decision which setup this UFC headliner opposite Uriah Hall.

Hall has been a curious case over the course of his UFC career. While having all the talent in the world, Hall really never lived up to the hype. That said, the soon to be 37 year old is riding a four-fight win streak into tomorrow night.

We last saw Hall at UFC 261 where he set a record. Hall defeated Chris Weidman after Weidman snapped his leg on a checked kick. It was the first time in UFC history that someone one by TKO without landing a single strike. Prior to that, Hall stopped Anderson Silva last October.

The UFC Vegas 33 main event kicked off with a touch of the gloves. Hall started out the striking with a stiff jab. However, Strickland countered with a nice jab of his own. Hall was looking to use his movement, but Strickland started walking him down early.

Good counter left hand for Uriah Hall. Powerful leg kick for Uriah Hall lands. Strickland goes right back to the jab and he’s keeping all of his shots down the middle early on. Lots of volume for Strickland and Hall might be hurt here.

Strickland is so busy here in the first round and Hall isn’t throwing a lot. Another good jab lands for Strickland. Hall starts moving a little more and lands a nice shot. The first round comes to a close and it’s 1-0 Sean Strickland at UFC Vegas 33.

Good 1-2 lands for Uriah Hall. Nice jab from Strickland lands. Clean combinations land for Strickland and Hall might be hurt. Hall backs against the cage and Strickland starts teeing off. Strickland shoots for a takedown, but Hall defends and they clinch against the fence.

Good uppercut from Strickland and the two break. Jab lands for Strickland, but Hall is the one moving forward here. Good overhand right hand lands for Hall. Hall pressing the action here, but Strickland is still landing good shots.

1-2 finds it’s home for Strickland. Hall lands a jab to the body then throws it up top. Big jab from Strickland lands. Hall being much more aggressive, but Strickland is still slightly getting the better of the striking. Hall lands a vicious calf kick then both men exchange big jabs. The round comes to a close at it’s 2-0 Strickland at UFC Vegas 33.

Entering the third round at UFC Vegas 33 and Hall is building a little momentum, but he has to do more in the third. Third round starts with more pressure and jabs from Uriah Hall. Calf kick lands for Hall.

Strickland lands his first jab of the round and he doubles it up. The two exchange jabs and Hall is slowing a little here. Something happens and Strickland lands something that hurts Hall badly.

Strickland starts throwing bombs and this one looks like it’s almost over. Hall is breaking, but he gets up and he survives. Strickland has his back up against the fence and he slams him to the ground.

Entering the fourth round here at UFC Vegas 33 and it’s desperation time for Uriah Hall. Hall pushes forward with two jabs to start the fourth round. Strickland circles on the outside and lands a jab.

Hall’s corner is begging for him to let his hands go, but he’s not throwing a ton. Both men snap each other’s heads back with jabs. Hall is really struggling with the distance control here in the fourth. Strickland lands a couple of nice straight shots.

Strickland throws a big shot of his own that seems to back up Hall. Hall already fading after a furious pace in the opening minute. Strickland clinches Hall and pushes him up against the fence.

The two break and Hall looks exhausted. Hall is throwing with everything he has, but he’s so tired. Strickland is landing a lot of clean shots here. Both men lean on each other in the middle. Strickland looks like he can finish this at anytime.

Hall gets pressed up against the fence again by Strickland. Two minutes left and Uriah Hall is running out of time. Two 1-2s land for Strickland on the break. Strickland goes right back to the clinch after he lands.

Hall is nothing left here with one minute left. Strickland landing shots to the body in the clinch. More good shots from Strickland in the clinch. Hall forces a break, but he can’t land anything big. Strickland sticks to him like glue and this one is over. Dominant performance by Sean Strickland at UFC Vegas 33.

Tomorrow night in the main event of UFC Vegas 33, we will see a showdown in the middleweight division. Two top eleven contenders will battle it out as “Primetime” Uriah Hall (17-9) is taking on Sean Strickland (23-3).

These two men are very familiar with each other and they’ve trained with each other in the past. However, they are both in each other’s way at UFC Vegas 33 and one of them is wanting to make that next jump up in the middleweight division.

Entering UFC Vegas 33, Strickland has won four straight. He’s been incredibly active since a two year layoff that started back in 2018. Last October, Strickland made his return and he’s gone 3-0 in the UFC with one stoppage.

The stoppage was an incredibly impressive win over Brendan Allen. In his last fight, he defeated Krzysztof Jotko by decision which setup this UFC headliner opposite Uriah Hall.

Hall has been a curious case over the course of his UFC career. While having all the talent in the world, Hall really never lived up to the hype. That said, the soon to be 37 year old is riding a four-fight win streak into tomorrow night.

We last saw Hall at UFC 261 where he set a record. Hall defeated Chris Weidman after Weidman snapped his leg on a checked kick. It was the first time in UFC history that someone one by TKO without landing a single strike. Prior to that, Hall stopped Anderson Silva last October.

I think you’re going to see a fun striking battle tomorrow at UFC Vegas 33. However, which Uriah Hall shows up will tell us a lot about how the fight is going to go. I’m expecting Sean Strickland to be the aggressor tomorrow night.

In a sense, that would play right into the playbook of Uriah Hall. Hall is a brilliant counter striker, however, we’ve seen him become way too passive in fights. When he’s passive, he can easily be outworked.

Ultimately, I think he’s going to get the job done at UFC Vegas 33. I think Strickland will have some success early, but I think Hall finds a huge shot in those middle rounds ultimately leading to his fifth straight win.

Prediction: Uriah Hall by TKO – Round 3