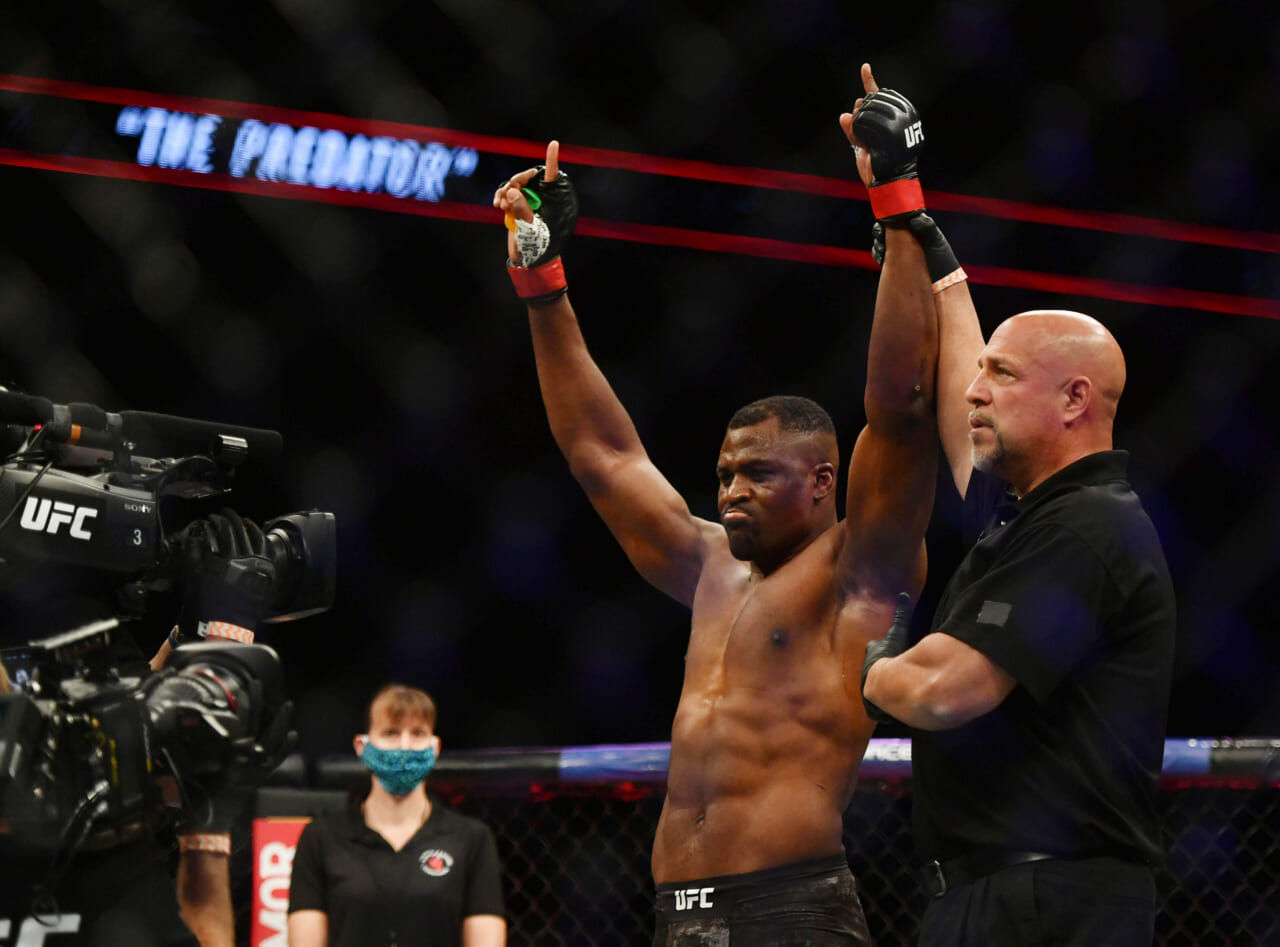 The UFC‘s heavyweight champion Francis Ngannou (17-3) is currently recovering from knee surgery that took place last month. Ngannou had damage to his ACL and MCL repaired following his win over Ciryl Gane that took place back in January.

The win over Gane was Ngannou’s first title defense in the UFC. After the fight was over, there were a lot of questions surrounding Ngannou’s future with the promotion. There has been some hostility between Ngannou’s camp and the promotion on the terms of a new contract.

Ngannou made a flat $600,000 before PPV for his last fight against Gane. The UFC had made attempts to resign Ngannou to a long-term deal with higher pay, but Ngannou and his management weren’t on the same page in regards to the terms.

One of the biggest sticking points for the heavyweight champion was his ability to box. Ngannou has been very open about what he wants from the UFC. He wants a massive payday that would allow him to box the best heavyweight in the world, Tyson Fury.

Ngannou is a superstar and he’s a knockout machine for the UFC. The heavyweight champion’s contract currently expires at the end of 2022 and Ngannou is targeting a return at the end of the year. Previously, he has said that he will not fight again under his current UFC contract.

At one point, it was hard to see the sides ever coming together. However, Ngannou seemed much more open to resigning yesterday when he appeared on Ariel Helwani’s MMA Hour. Ngannou talked about the fact that there are still big fights in the UFC he wants and he definitely wants to resign.

Over this past weekend, Fury knocked out Dillian Whyte in the sixth round of their title fight. After the fight was over, Fury said that he was done with prize fighting in terms of heavyweight boxing. However, he called Ngannou over in the ring with him and talked about what he wants.

Fury said that he wants a special-rules matchup with the heavyweight champion to see who the baddest man in the world is. Per the fighters, they would fight in an octagon with four-ounce gloves but they would only be allowed to box.

I have no idea if the UFC would actually do this, but it would be a massive event. To me, if you’re going to let Conor McGregor box Floyd Mayweather, the UFC should absolutely be open to letting this special-rules fight happen with Ngannou and Fury.

Tyson Fury’s contract with Top Rank and ESPN also came to a close with his win on Saturday night. That could be another key to having this fight come together. I don’t see any scenario where Bob Arum and Dana White work together so Fury not being tied to Arum is a huge key that opens the door.

The UFC is not going to let Ngannou walk. He’s too big (no pun intended) for their heavyweight division. If it comes down to it, I find it hard to believe that they would walk away from the massive money-maker that would be Francis Ngannou – Tyson Fury.

Here’s my guess of what’s going to happen. Jon Jones and Stipe Miocic are going to fight over the summer for the interim heavyweight championship. The UFC is going to go back to Ngannou with a deal that says he must fight the winner in December.

However, there will be a clause that states if he wins, he can box Tyson Fury in 2023. This would make Ngannou once again bet on himself but it would give him the keys to what he wants.

Can you imagine how much bigger the Fury – Ngannou fight would be if Ngannou was coming off of defeating Jon Jones? However, if Jon Jones or Stipe Miocic were to defeat Ngannou, it would allow the UFC an out from making the fight happen. 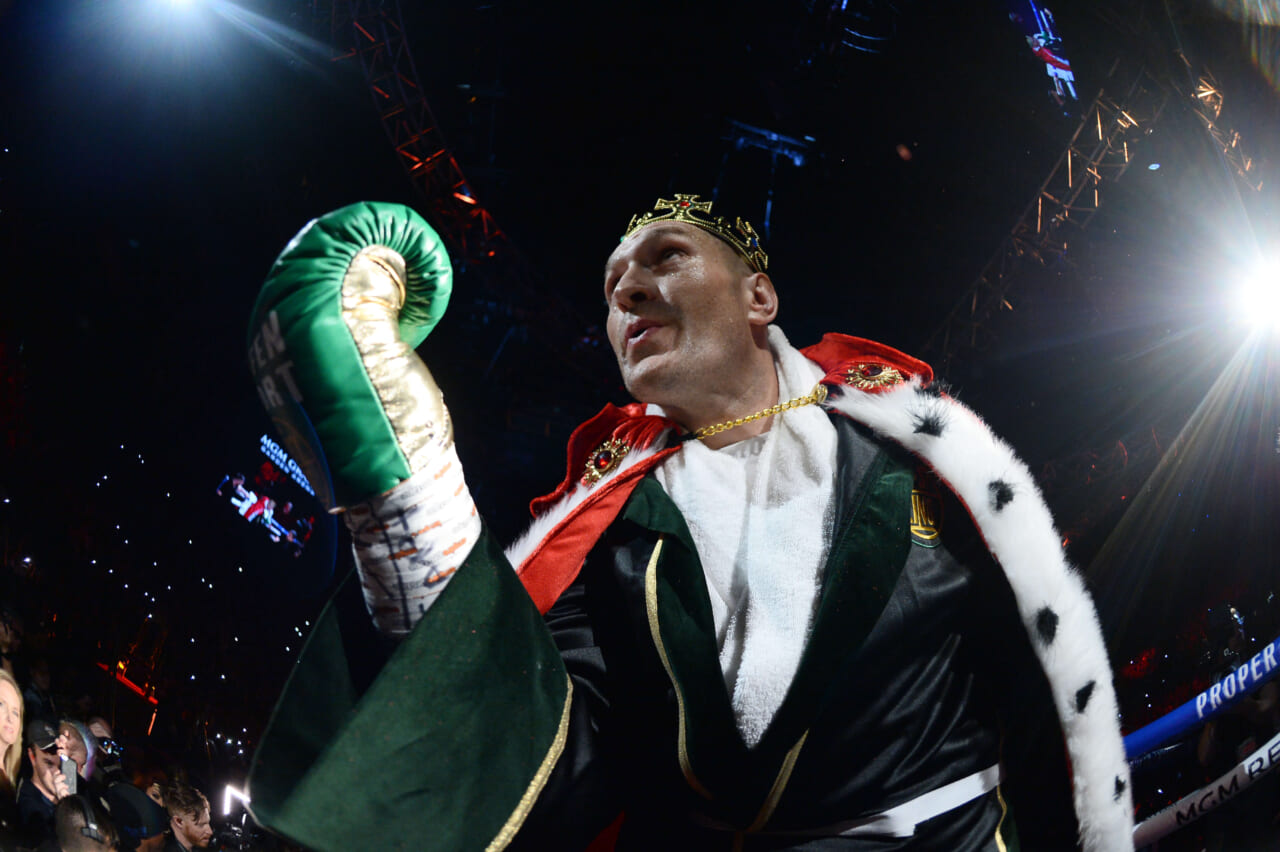 The biggest potential matchup in boxing is set. Promoter Eddie Hearn confirmed with ESPN today that the fights between the heavyweight champion, Tyson Fury (30-0-1) and Anthony Joshua (24-1) are signed.

The two men will meet in a two-fight series to unify the boxing heavyweight championships. The current target is for the first fight to take place in July while the second fight would take place just before the end of the year.

The two heavyweight champions will share a 50/50 split in terms of pay for the first matchup. In the second matchup, whoever won the first fight will get the higher of a 60/40 share in terms of the payout.

At the moment, the promoters are currently working with about nine different locations to host the opening matchup. It appears that the Middle East is likely to secure the first of the two boxing matchups. However, that is far from a done deal at this time.

More importantly, we are finally going to see some clarity in the heavyweight division. Instead of their being two heavyweight champions, by the end of 2021, we will see one universal heavyweight boxing champion.

However, that was the last time Fury had those titles. After some issues outside of the ring, Fury took almost three years off from competing. The heavyweight division moved on and Anthony Joshua rose to the top.

However, Joshua did have a slip up against Andy Ruiz. Joshua lost in his first matchup with Ruiz before outpointing him to regain the heavyweight crown in late 2019. When Tyson Fury returned to boxing, he seemed focused on the WBC heavyweight title that was held by Deontay Wilder.

Fury and Wilder fought to a draw in their first matchup, although, most believe that Fury won. In the second matchup, Fury didn’t let it get to the judges. He stopped Wilder to become the WBC heavyweight champion of the world.

Now, we are going to see these two great heavyweights unify the boxing championships. It’s an interesting two-fight deal, but we should be in for two great matchups this year.

One of the best rivalries in the last 30 years in boxing‘s heavyweight division will see it’s third chapter at the end of 2020. Tyson Fury (30-0-1) and Deontay Wilder (42-1-1) are getting ready to prepare for their third fight. Yesterday, Top Rank executive Brad Jacobs told Sky Sports that the fight would happen at the end of this year with many possiblities when it comes to location.

“We are focusing on December 19 and are hoping that, by then, we are back to a nearly normal situation…We are looking all over the world, at this point, for the best location for this event. That will be narrowed down and we’ll see where it takes us.” Top Rank’s Jacobs told Sky Sports.

Recently, it was announced that Fury had reached a deal to fight fellow heavyweight champion, Anthony Joshua. That fight is considered to be the biggest fight that boxing can make in it’s heavyweight division. It would be a fight that would unify all of the heavyweight titles in boxing. However, there are a couple of challenges that are standing in the way.

Who is boxing’s baddest man on the planet?

The boxing world hasn’t seen a knockout artist like Deontay Wilder since Mike Tyson. What the Bronze Bomber lacks in technique, he makes up for in sheer power. In his 42 professional wins, only one fight has gone the distance. In the first fight with Fury, Wilder’s power was on full display as he dropped Fury twice in the fight. The fight would end in a draw after 12 rounds.

The second fight between Fury and Wilder was completely one sided. The Gypsy King completely dismantled the former champion Wilder. The beating was so bad that Wilder’s corner threw in the towel which gave Fury the TKO victory and the WBC heavyweight title. Their third fight is going to be highly anticipated, but it should be one where Fury is the significant favorite. There is no question that Fury is the better boxer, but with Wilder, he’s only one punch away from winning any fight.

A boxing match for the ages has now been agreed to for 2021 that will feature the two best heavyweights in the world going head to head to see who really is the best in the world.

SkySports reported today that WBC heavyweight champion, Tyson Fury (30-0-1), and the IBO, WBA, IBF, and WBO heavyweight champion, Anthony Joshua (23-1) have agreed to a two-fight deal. The two British heavyweight champs have long been linked to one another. There were questions on if the fight would ever come together, but it now appears we will get to see the boxing match that we have been waiting for. Of course, both men have challenges ahead of them before the fight can happen.

The Gypsy King is considered by many to be the best heavyweight boxer in the world. When he defeated Wladimir Klitschko back in 2015, there was no doubting his greatness. However, Fury went through a rough period of addiction and depression which derailed his career. After winning the titles against Klitschko, Fury stepped away from boxing for almost three years. In that time, top heavyweights such as Anthony Joshua and Deontay Wilder became stars. Fury got his life back on track and made his return in 2018.

Since his 2018 return, Tyson Fury has looked better than ever. He’s gone 5-0-1 in six fights with that one draw being extremely controversial. Fury met undefeated WBC heavyweight champion, Deontay Wilder (42-1-1), for the WBC title back in 2018. Fury controlled much of the fight, but was floored in the final round by Wilder. Had he not been knocked down, he would have won a decision. Instead, the fight was declared a draw. After both men won couple of more fights, they ran things back earlier this year. Fury left no doubts in this one as he stopped Wilder in the 7th round. Fury holds a record of 1-0-1 in the series, but the two men will have their third fight before the Joshua fight can materialize. There is no current date for their third fight, but it’s expected to be towards the end of 2020. Once Fury fights Wilder, he also is scheduled to fight Dillian Whyte (27-1) who is the mandatory challenger for the WBC title.

Entering 2019, many people believed that Anthony Joshua was the best heavyweight in the world. He held four titles, and he was an Olympic gold medalist. He had only fought in England, but made his much anticipated US debut against a huge underdog, Andy Ruiz. Ruiz went on to shock the boxing world by knocking out Joshua in their first fight. The two men immediately scheduled a rematch that took place in Diriyah. Joshua looked much better in their rematch while Ruiz looked sluggish. Joshua took back his heavyweight title by unanimous decision.

Much like Fury, Joshua has his own business to attend to before this super fight can happen. Joshua is scheduled to fight mandatory challengers Kubrat Pulev (28-1) and Oleksandr Usyk (17-0). If Joshua can defeat both of those men, there will be nothing left for him besides the fight with Fury.

A boxing match for the ages

This is the boxing match that the world has been waiting on for some time. Of course, there is a lot still in the way. Both men have to successfully defend their titles two more times before the fight can become a reality. However, getting the fight agreed to was a massive hurdle, and they have cleared that hurdle. For boxing fans, we can all just hope that both men get through their next couple of fights so we can see the fight that would truly determine who is the heavyweight king of boxing.