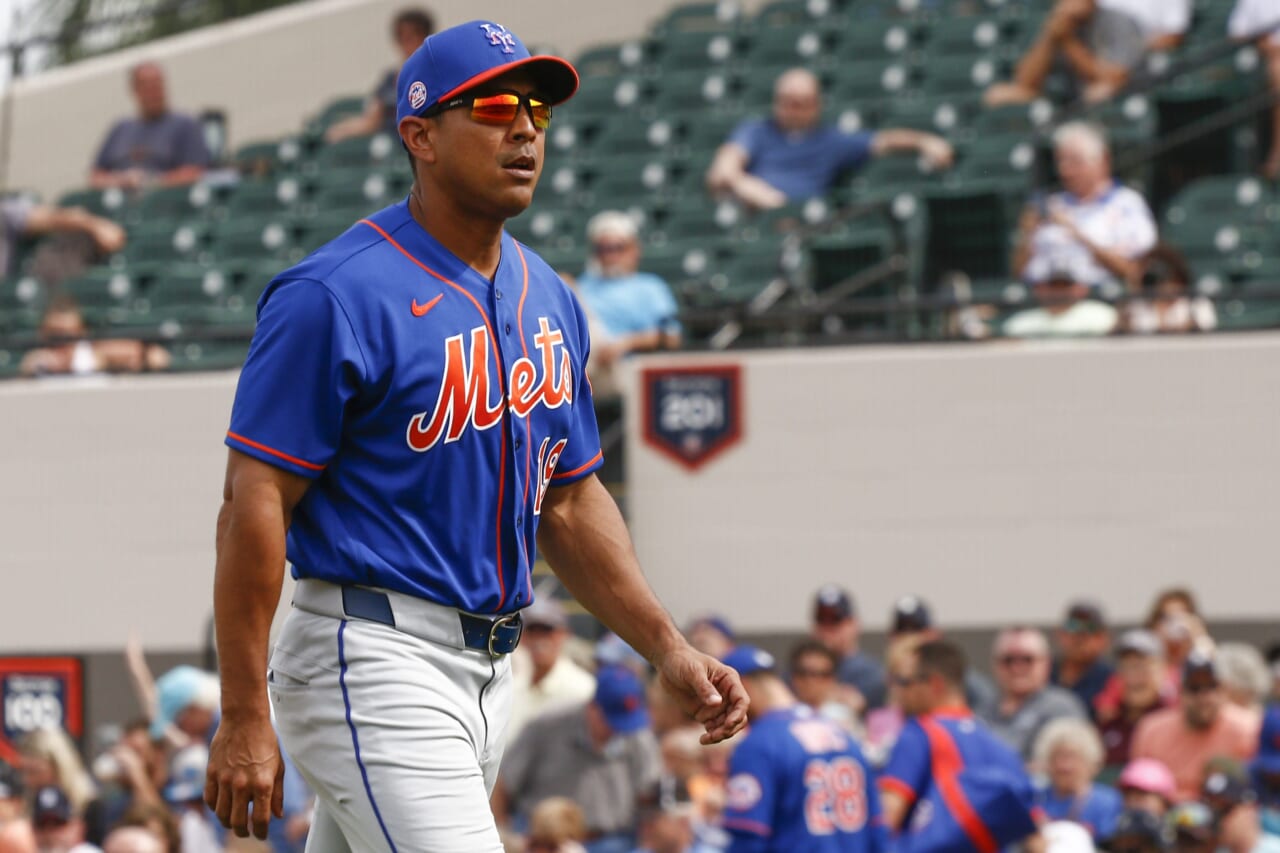 Just as once Brodie Van Wagenen move blows up in their face, another comes back to haunt him as Travis d’Arnaud burns the New York Mets as his three-run double and five total RBIs helped the Atlanta Braves come back in an 11-10 Mets loss. For another night, the Mets could not get the big hit they needed as Wilson Ramos struck out with the tying run on second to end the game.

Van Wagenen designated d’Arnaud for assignment way too early in 2019, and it continues to blow up in their face. The Mets bullpen was supposed to be a strength for them, but it is clear they have significant issues to address there. Every reliever they turned to allowed a run, and Dellin Betances and Seth Lugo hurt them the most. Both of them did their best Edwin Diaz impression; they combined for a five-run outing to prevent the Mets from winning once again.

At this point in the season, Jeurys Familia and Drew Smith are the only relievers to pitch with any consistency. It would not be a surprise if Familia got the next opportunity to close for the Mets.

Rick Porcello is partly responsible for the problem as his four-inning, four-run outing forced manager Luis Rojas to turn to the bullpen early. After the Mets took an 8-2 lead, the bullpen began to falter. The loss is their third straight and drops them to 3-5 on the season.

The Mets offense was not the problem as they scored ten times and homered three times. J.D. Davis, Robinson Cano, and Amed Rosario were responsible for the Mets’ longballs. Cano’s latest hot streak moved him to a .360 average on the season. Andres Gimenez also had an impressive offensive game, providing two hits and great defense at third base.

The Mets hope to break their three-game losing streak as Michael Wacha makes his second start of the season. The Saturday night matchup starts at 7:10 p.m. will be opposed by Touki Toussaint. 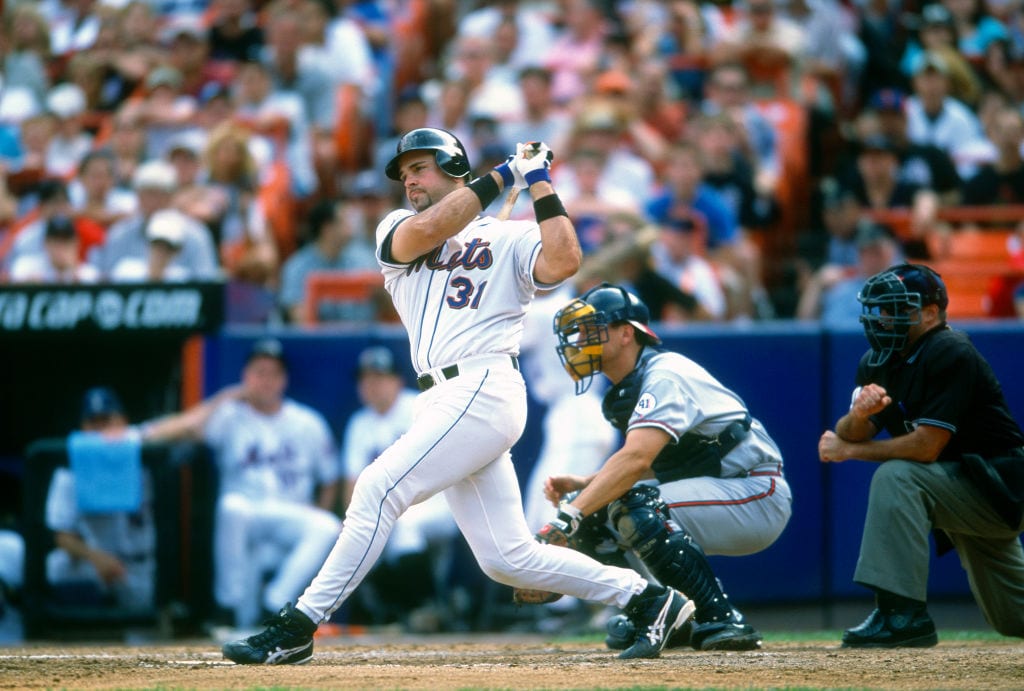 The last 20 seasons of New York Mets baseball has not been kind when it comes to the catching position. After our number one spot, the list quickly falls in talent. The position is lacking talent to a point where they have not produced an All-Star catcher since 2006.

There is no doubt about the number one spot on the list. Mike Piazza came to the Mets in 1998 and immediately took the city by storm. Though not the best defensive catcher on the list, he hit .296/.373/.542 with 220 home runs during his time in Flushing. Piazza made six All-Star teams with the Mets, provided countless clutch hits, and entered the Hall of Fame with a Mets cap. He also earned the distinct honor of having his number retired by the franchise.

Paul Lo Duca had to fill Piazza’s shoes during his time with the Mets. His power could not match up to Piazza’s, but he made up for it in every other facet of the game. Lo Duca earned an All-Star appearance in 2006 and slashed .297/.334/.404 with the Mets. He threw out baserunners at a slightly better rate than Piazza but was better overall defensively. Lo Duca also provided an experienced bat in the two spot, which allowed Jose Reyes to steal bases and gave a contact hitter to a potent lineup.

Wilson Ramos is putting the @Mets on his back. ðŸ’ª pic.twitter.com/P7pDxAeiSp

Yes, one season of Wilson Ramos makes him the third-best catcher the Mets had in the last 20 seasons. After a slow first half, Ramos turned things on in the second half, and it included a 26-game hitting streak. His power numbers were not typical of his career, and even Ramos admitted he could drive the ball more. Ramos was also one of the best clutch hitters on the team, hitting .307 with runners in scoring position.

Travis d’Arnaud never turned into the prized prospect Noah Syndergaard turned became. Health issues and an inconsistent swing/approach at the plate held him back from reaching the potential he tapped into once he left the Mets. During his seven seasons with the Mets, he only batted higher than .250 once but had three seasons of double-digit home run totals. Very overlooked was his pitch framing, which allowed him to steal strikes as good as any catcher in baseball.

With the news of Travis dâ€™Arnaud being DFAâ€™d, this memorable home run of the 2015 NLCS came to mind. Thanks for your time spent here in Queens and good luck with the rest of your career!#Mets #LGM pic.twitter.com/rSV3Ucw5pX

Ramon Castro never earned the nod as the everyday catcher but was a very productive back-up. He was the definition of an excellent second-string catcher, hit for power, and throw guys out. Castro hit .252/.321/.452 with 33 homers and 121 RBIs during his time as a Met.

Josh Thole was a unique hitter that has become a dying breed in baseball. His choke-up, put the ball in play focus, prevented him from ever solidifying himself as a starting catcher. Thole only had a slugging percentage of .333 and hit seven home runs during his four seasons in Flushing. The one thing he holds over every catcher in Mets history is that he caught the only no-hitter in franchise history.

john buck at the start of 2013 was somethin' else pic.twitter.com/q0XnSH8ZBH

John Buck had a white-hot April in the power department. He homered nine times and had more extra-base hits than singles. Buck came back to Earth, only hitting .206 with six homers for the rest of his time before the Mets shipped him to the Pittsburgh Pirates. He also helped guide Matt Harvey to a dominant season, catching all but one of his starts.

Kevin Plawecki was another Mets catching prospect who never panned out. He slashed .218/.308/.330 with 14 home runs and was a clubhouse favorite. Plawecki also received the rare task of pitching in two games where he had a 12.00 ERA.

The rec specs made Jason Phillips a fan favorite who was also a kind person. He did not earn consistent playing time until 2003 when he played some first base and caught when Mike Piazza needed a break. It was his best season hitting in the big leagues at .298/.373/.442. The next year was the complete opposite hitting .218. The consensus from a lot of Mets fans was that he was the slowest player they had seen.

When Brian Schneider arrived to the Mets, he was no longer the underrated catcher he once was. His career was on the decline, and the Mets only received one decent year from him. Schneider had 12 home runs in 169 games, but his defense was a considerable upgrade. He threw out runners above league average and handled a jumbled pitching staff very well.

Honorable Mentions (Who Could Easily Make the Bottom Half of the List): 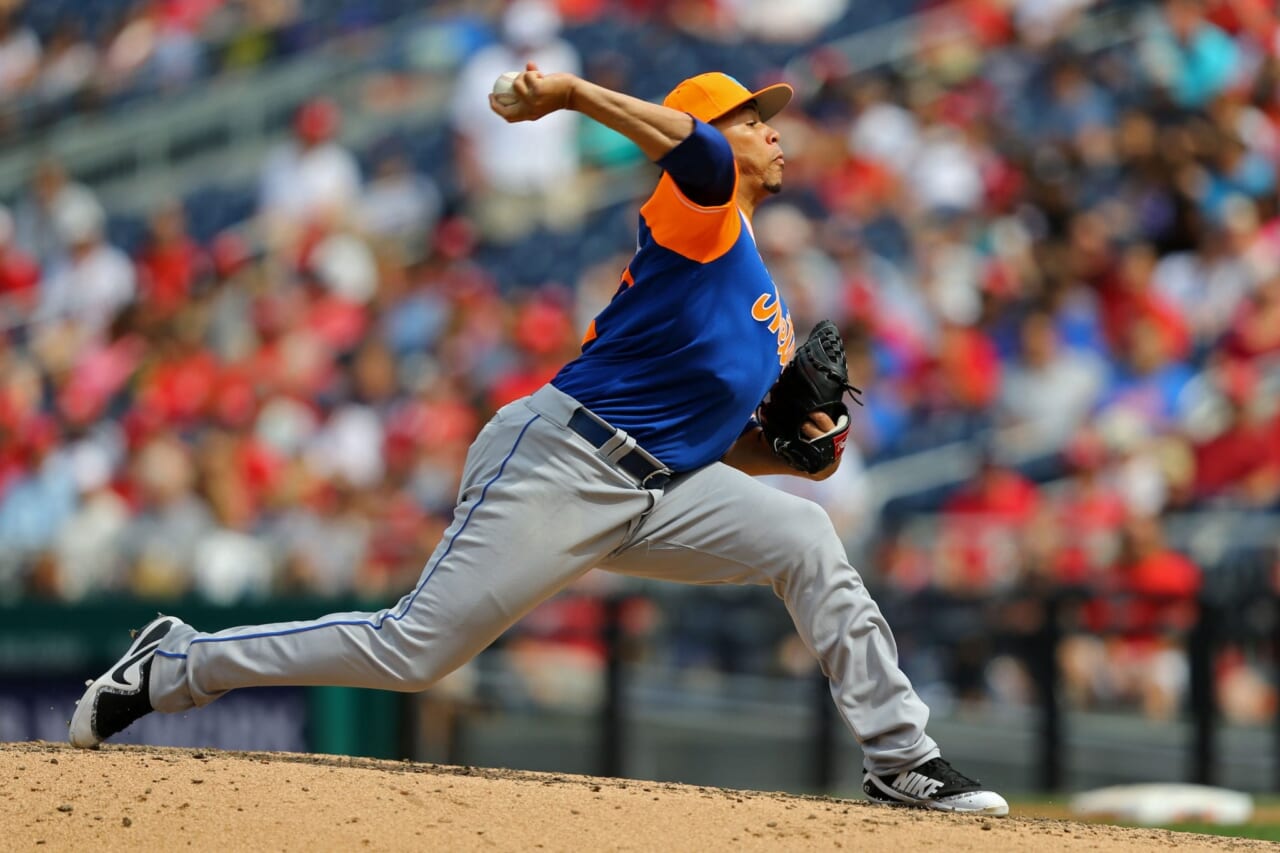 The New York Mets have a history of missing out on significant players when they happened to be on their roster. Through trades or merely cutting a player, here are the players the Mets gave up on too soon.

d’Arnaud had initially been the prize piece in the R.A. Dickey deal, but he never panned out to be the top prospect praise he received. He hit .242 with 47 home runs during his seven seasons as a Met. After he started 2019 slow, the Mets released him, and he landed on the Dodgers before heading to the Rays five days later. He ended up breaking out to hit .263 with 16 home runs and 67 RBIs in Tampa. It resulted in him earning a two-year deal with the Braves during the offseason.

In 22 games, Daniel Murphy now has 8 HR and 25 RBIs against his former club. https://t.co/EHOUTZKb35 #PapaSlam pic.twitter.com/AFuZlvbzh8

Murphy cemented his place in Mets fans hearts when he dominated the 2015 postseason to lead the Mets to the World Series. In the World Series, he left fans with a bad taste in their mouths after he struggled to produce offensively and defensively. The Mets tried to bring Murphy back on a qualifying offer but did not offer him anything more.

Murphy ended up signing with the rival Nationals. Not only did he put together dominant seasons with the Nationals, but he torched his former team. Since Murphy left the Mets, he is hitting .355/.411/.650 with 12 homers and 44 RBIs against the Mets. The Mets replaced Murphy with Neil Walker, but he never put up numbers anywhere near Murphy’s.

Justin Turner with the HUGE blast to put the Dodgers on top late! pic.twitter.com/LHazTrs2rI

Turner might be the biggest miss the Mets had. He hit .265/.326/.370 as a Met, with very minimal power numbers. The Mets decided to let him go after the 2013 season, even though it looked like Turner started to become a good hitter. Turner hit .305 during his final two months with the Mets, but the organization never felt that he was an everyday player.

He went on to the Dodgers and has become a star. In his six years with the Dodgers, Turner is a .302 hitter, with 112 home runs, 168 doubles, one All-Star selection, and three top-15 MVP finishes. He has been even better during the postseason hitting .310 with nine homers over 54 playoff games.

This is Hansel Robles. Heâ€™s a big fan of The Undertaker. He also struck out the side. pic.twitter.com/SYAi4iUAfv

In a year where the bullpen killed the Mets season, this one hurts. Robles always had a live arm and had two solid seasons to begin his Mets career. In 2017, things started to go downhill as the home run started to hurt him. The Mets put Robles on waivers in 2018 after he allowed seven home runs in 19.2 innings.

The Angles claimed Robles, and it seemed like everything turned out better in LA. Through a year and a half, he has a 2.64 ERA in 108 games, allowing only eight home runs with the Angels. He even emerged as the Angels closer, locking down 23 games in 2019. 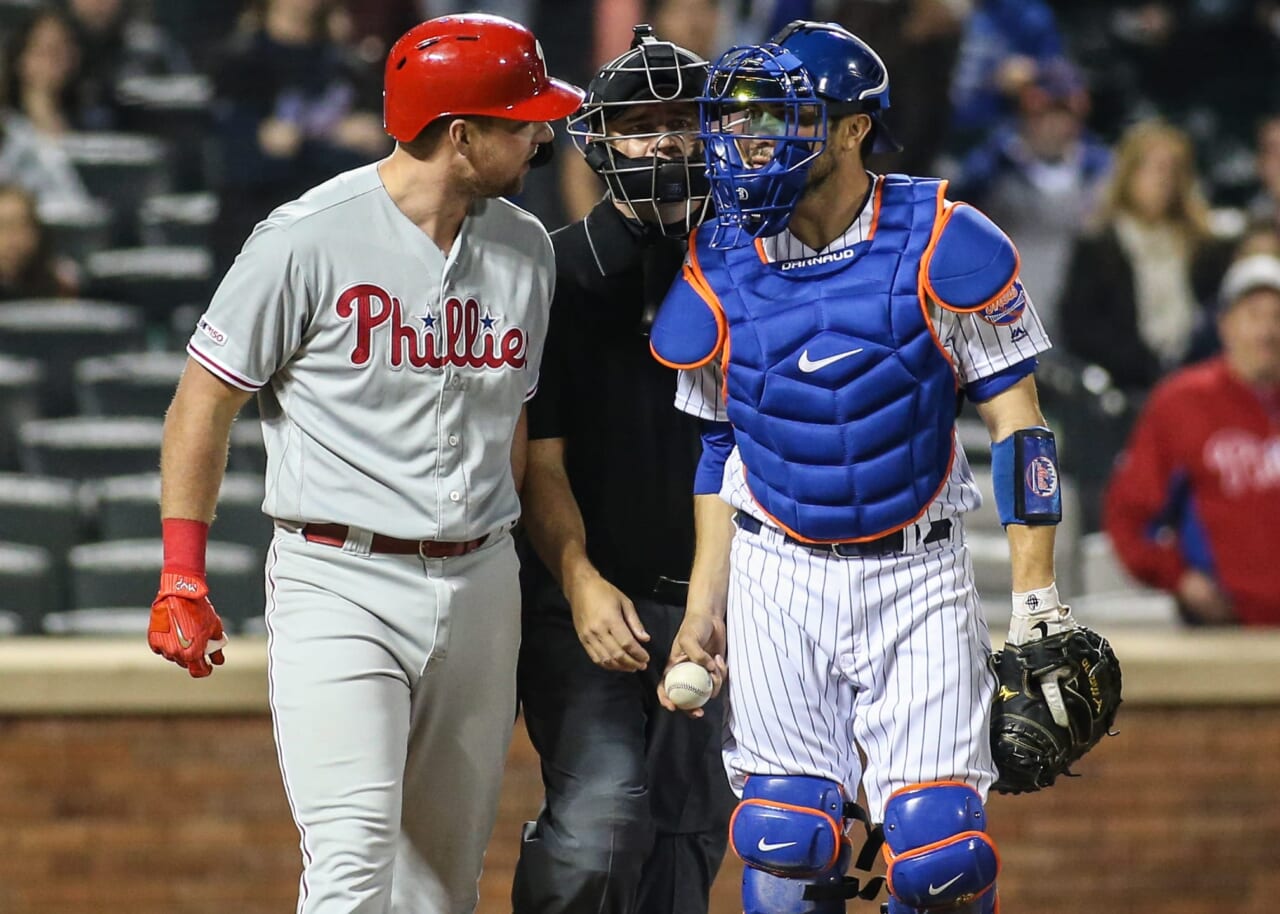 Remember this guy? Travis d’Arnaud was the original prize piece in the R.A. Dickey trade prior to the 2013 season. In 2019 the New York Mets gave him a very short leash, before releasing him in early May. Unfortunately for the Mets, they should have been a little more patient with him after April.

Is it considered #crushed when the left fielder doesnâ€™t move? Asking for Travis dâ€™Arnaud. pic.twitter.com/kVuCQok5Df

The Mets made their feelings on d’Arnaud clear when they brought in Wilson Ramos to be the starting catcher. His role was going to be as a backup after multiple seasons as the starter. Of course the questions would always be with his throwing ability, after coming off of Tommy John Surgery.

23 at-bats was all d’Arnaud received before he was cut. In the organizations defense, he only had two hits, but the leash was far too short. During his last few chances he looked like he was putting good swings on the ball, but were hit right at the fielders. He only received four starts during the first month of the season and was sent away without receiving anything in return.

He threw out two of the six baserunners who attempted to steal against him, silencing some critics of his defense. It was not enough to keep him around as it seemed like the Mets were ready to move on to Tomas Nido as their backup.

The decision ended up as a huge blunder for the organization. Nido struggled with the bat and on defense and d’Arnaud was solid with the Rays and parlayed that season into a two year deal with the Braves.

Hitting For Power: F, Both of his hits were singles.

Fielding: C+, The throwing was not bad, but his last game as a Met was where they had to pull the plug.

Speed/Baserunning: N/A, was only on base four times.

Intangibles: B, The pitchers loved working with him, but management put a dark cloud over him.

Overall: F, I wish he could have received more opportunities, but he unfortunately needed to find his way in another organization.