Jokubaitis, the 34th overall pick in the 2021 NBA Draft, led all Rising Stars-eligible players with 7.2 points, 2.8 assists and a 7.6 average performance index rating. The 6-foot-4 playmaker is having a historic season, knocking down 59.5 percent of his three-pointers. He is on the verge of becoming just the second player in Euroleague history to lead any season with 60 percent or better accuracy from behind the arc if he sustains his form in the Final Four.

Jokubaitis is the third FC Barcelona player after Alex Abrines (2016) and Ricky Rubio (2010) and the first Lithuanian to win the Rising Star Trophy. He beat projected 2023 NBA’s first overall pick Victor Wembanyama of LDLC ASVEL Villeurbanne and Marek Blazevic of Zalgiris Kaunas in the coaches’ voting.

A gun-shy Jokubaitis picked things up quickly with his new club.

After hitting only 3 of 8 three-point shots in his first 11 games, Jokubaitis turned red-hot in the final 19 regular-season games making 18 of 29 (62.1%) threes.
He sustained his hot shooting in the playoffs. His 80 percent (4 of 5) three-point accuracy Mark leads all players in Barcelona’s 3-2 series win over FC Bayern Munich. Overall, Jokubaitis has made 22 of his last 34 attempts (64.7%), heading into the Final Four.
But Jokubaitis downplayed his historic marksmanship this season in March.

“It is a strange phenomenon. We all understand that [58 percent] are not because I am a dangerous shooter,” Jokubaitis said. “My shooting selection allows me to cheat stats. Really, I don’t even know how I manage to do it, but it’s fun that hard practice brings the results.”

Jokubaitis has three more years left in his contract after this season. He plans to join the Knicks in the NBA Summer League again and return to Euroleague for one more season.

A Knicks contingent went to see Jokubaitis in February, and the Lithuanian guard said they saw what they wanted to see and added, “now everything is in their hands.”

But Jokubaitis also wants to be 100-percent ready when he jumps to the NBA. He wanted to avoid becoming just another Euroleague talent on the bench.

“What I understand now and did not understand before is that there are a lot of players who come back to Europe, which means that maybe they were not prepared 100% for the NBA,” Jokubaitis told Basketnews in February.

“When I feel that I am fully prepared, and I have taken everything from Europe, then I will think about going there. I am not saying that I am not ready, but I am focused on other things.”

He later clarified in another interview in March about his future plans to join the Knicks.

“Some people thought this was my thinking about titles, but I meant something else. It will happen when I feel inside that I have reached my maximum in terms of my improvement,” Jokubaitis said.

“There are many bad examples, like Kevin Pangos, who dominated the EuroLeague. It’s the NBA where even the best European players don’t fit in.”

He is likely coming over to join the Knicks in the Summer League but intends to play another season for FC Barcelona.

“Two years or so will pass, and I’ll talk to my agent about going to the NBA. But before that, I’ll have to feel 100 percent confident that at least I’ll have a chance to fight for the minutes,” Jokubaitis said.

“For example, I come to the US, and they say that you will play in the G League, and sometimes you will be with the main team. Then it’s better to improve in the EuroLeague.”

If everything goes according to plan, Jokubaitis will join the Knicks in the 2023-24 season.

Another New York Knicks loss, another career night from an opposing player.

This time, two Cavaliers torched the Knicks defense as Cleveland dealth New York its fourth loss in 10 games with a 126-109 beating Sunday night.

Ricky Rubio scored 37 points behind eight triples â€” both career highs â€” as he stepped up when starter Collin Sexton went down with a torn meniscus in the first half. The draftâ€™s third overall pick Evan Mobley added a career high 26 points for the surprising who are off to a strong 7-4 start.

The dispirited Knicks effort came two nights after they shackled Giannis Antetokounmpo and the defending champion Milwaukee Bucks on the road.

In all the Knicksâ€™ four losses this season, an opposing player had a career game against them.

In their shocking upset to Orlando Magic, New York native Cole Anthony grabbed a career-high 16 rebounds that went with 29 points and eight assists. For the season, the 6-foot-3 Anthony is averaging 7.8 rebounds per game and has logged in only two double-digit rebounding effort in 10 games.

The Knicksâ€™ second loss came at the hands of the Toronto Raptors where OG Anunoby stepped up in the absence of Pascal Siakam and rookie stud Scottie Barnes. Anunoby dropped a career-high 36 points on 13 of 27 shooting. It was the only time this season that Anunoby scored more than 30 points. His previous season-high was 25.

Two nights after Anunobyâ€™s explosion, it was Myles Turnerâ€™s turn. The Indiana Pacersâ€™ big man connected on an astounding 7 of 10 threes, a career-high. Turnerâ€™s 25-point, 13-rebound and 3-block monster game was too much for the Knicks in a 111-98 loss. The outlier against the Knicks has catapulted Turner into a respectable 35-percent three-point shooter this season.

Against the Cavaliers, the Knicks had a 90 percent chance of winning the game based on the quality of shots.

So, how outlier was Rubioâ€™s â€™en fuegoâ€™ performance on Sunday night? The Spanish guard just became the first player in NBA history to post at least 30 points and 10 assists while making eight 3s off the bench. Rubio entered Sundayâ€™s game as a 34-percent three-point shooter this season. While Mobley had shown generational talent as a modern big man, it was the only second time in 11 games that he scored more than 20 points.

But despite the Cavaliers badly outrebouding the Knicks, 48-32, the disparity in shot attempts isnâ€™t that wide. But the Cavaliers hit 49 of 90 shots (54.4 percent) in contrast to Knicksâ€™ 39 of 85 (45.9 percent). The Knicks simply missed good looks.

On Sunday night, they paid dearly for it.

The Knicks have been plagued by inconsistent shooting and defensive effort throughout their uneven 6-4 start.

On the other side of the ball, the Knicksâ€™ once-stout perimeter defense is nowhere to be found. They have allowed 91 wide-open 3-pointers, the most by any team this season, according to NBA stats tracking data. The definition of a wide-open three-pointer is that no defender is within six feet of the shooter. The Knicks are currently in the bottom seven of opponentsâ€™ three-point field goal percentage, allowing 36.3 percent per game. Last season, they were no. 1 (33.7).

Are they running out of luck? Or is it an alarming sign of lack of defensive effort in closing out to the perimeter shooters?

Fluke or not, itâ€™s these inconcistencies on both sides of the ball that have been costing Knicks some early season victories. 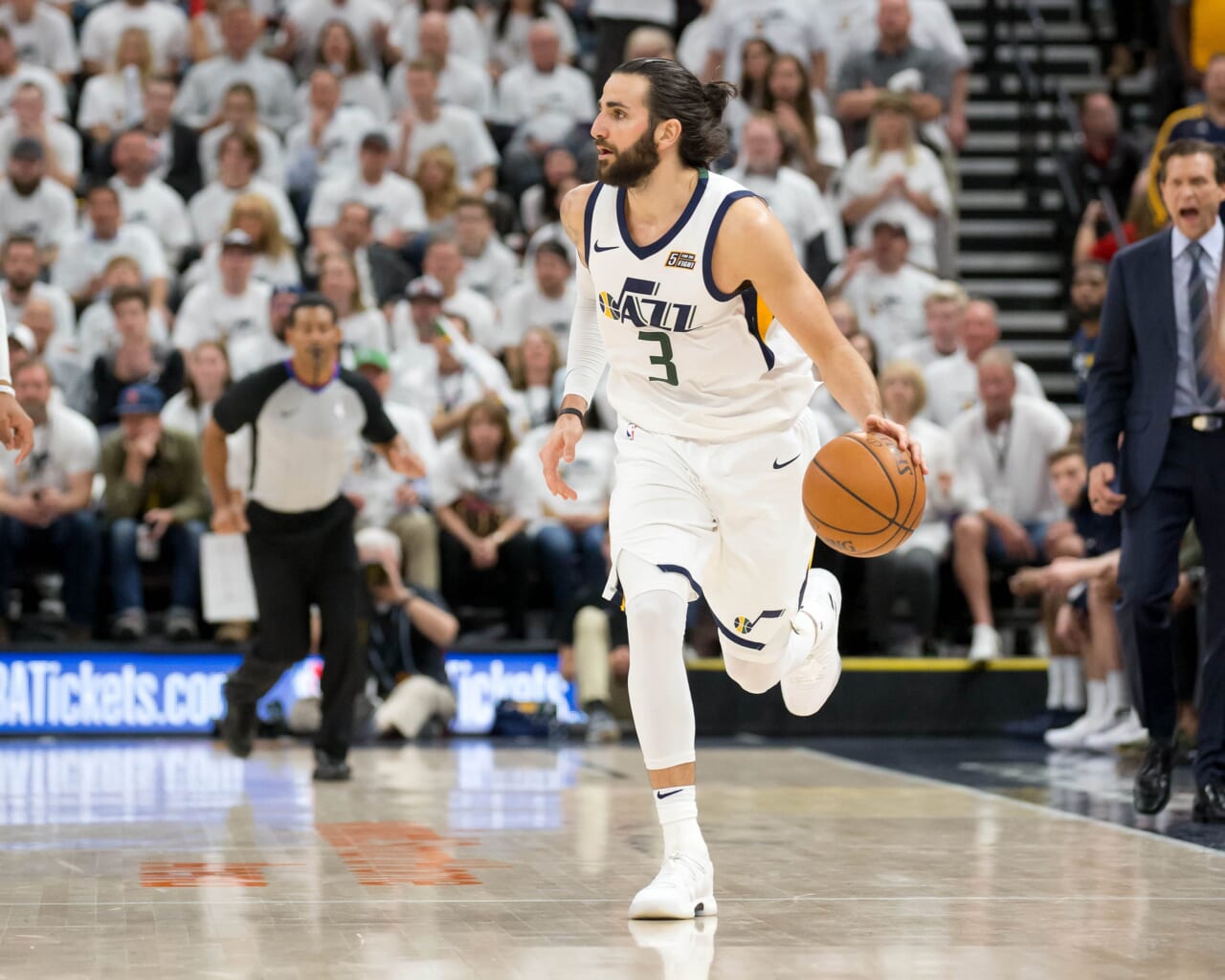 With Frank Ntilikina proving to be a menace on defense for the New York Knicks, his offensive game is still very much undeveloped. Going into his sophomore season, the young French point guard will be looking to change that narrative, as he averaged a dismal 5.9 points per game last season.

With a field goal percentage hovering around .364, Ntilikina has a long way to go before he can be considered one of the more efficient PGs in the league.

This brings us to the question of this article:

Should the New York Knicks consider Ricky Rubio in free agency next season?

Ricky Rubio finished the 2017 season with the Utah Jazz averaging 13.1 points per game, the highest in his seven years as professional, and finished up with a .418 field goal percentage. His offensive capabilities are much more enticing than the young Ntilikina’s, but then again, Rubio hovered around .360 FG% for the first two years of his career.

Ultimately, the reason for this signing would be for Rubio to take the reigns while Frank comes off the bench and provides defensive support and depth. It would allow for him to develop his overall game and prepare himself for the future. Rubio will be making close to $15 million next season, so he will likely be asking for a max contract. The Knicks will likely only be able to fit one big-deal under their salary-cap.

Would it be wise to spend it on an aging point guard? Maybe, considering his history of good health and productivity, making him an offer might be a solid move. Alternatively, the Knicks could go after Kyrie Irving, and we all know what he’s capable of. The issue is, he could turn out to be the next Derrick Rose in New York – playing sparingly and living out his contract on the injury reserve.

The interesting part about Rubio is that he’s more than capable of playing defense too. He averages two steals per game and is one of the best passers in the league. His ability to set up his offensive weapons makes him dangerous at all times, and an assist specialist is something the Knicks have missed in recent years.

Having a player like Rubio to work with Kevin Knox and Mitchell Robinson could take the Knicks’ offense to the next level.