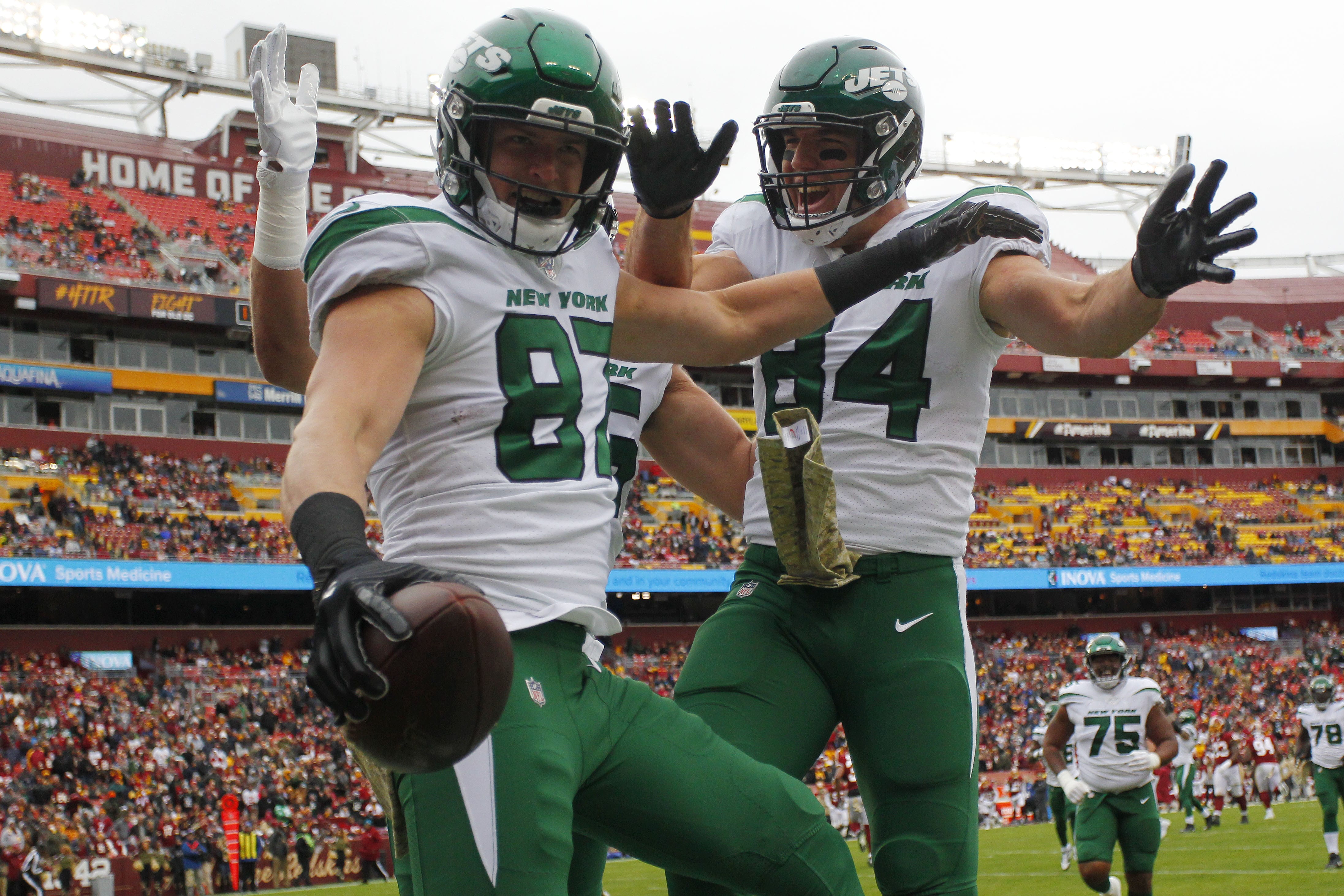 The New York Jets announced the return of the veteran tight end Brown, who will embark on his third year in green.

The New York Jets announced the re-signing of tight end Daniel Brown on Monday morning. Terms and figures of the deal have yet to be disclosed.

Brown, set to turn 29 in May, will return for a third metropolitan season, having signed with the team as a free agent in March 2019. His previous NFL endeavors came in Baltimore and Chicago after going undrafted out of James Madison. He is mostly known for his special teams efforts, partaking in a career-high 76 percent of such snaps last season.

In his listed position of tight end, Brown has been used as a blocker but has earned 103 yards on 13 receptions over his first two years in New York as well. His most notable box score contribution came in a November 2019 visit to Washington, when Brown opened scoring in a 34-17 Jets win with a 20-yard touchdown reception from Sam Darnold. It was his first NFL touchdown in nearly three full calendar years.

Last season, Brown was part of the Jets’ final roster cuts but was brought back to the active roster shortly after. He earned a pair of receptions, one each in the final two games of the season, for 31 yards.

With the signing of Brown, the Jets still have several free agents from the 2020 roster that remain up for grabs. Among the notables still available are secondary defenders Brian Poole and Bradley McDougald, as well as linebacker Neville Hewitt.

The New York Jets have announced the re-signing of running back Josh Adams. Adams, 24, earned over five yards a carry last season with 157 total yards on 29 attempts, two of which went for scores.

Adams burst onto the national scene with a stellar career at Notre Dame, departing South Bend as the program’s fifth all-time leading rusher (3,201 yards in three seasons). He went undrafted, but finished amongst the top ten in rookie rushers after collaborating with current Jets general manager Joe Douglas, then working in the Philadelphia Eagles’ front office. Adams earned 511 yards and three scores as the Eagles went to the playoffs and earned a win in the Wild Card round over Chicago.

The Jets added Adams to their roster when the Eagles dismissed him at the end of training camp in 2019. He had only eight carries in three games during his debut year but found an opportunity to impress when injuries and departures depleted the New York rushing attack. Adams would go on to partake in one of the most prolific Jets rushing days in recent memory when he had 74 yards to go with Ty Johnson’s 101 in December against the Raiders at MetLife Stadium. He was the Jets’ top rusher during their season final in New England, picking up 47 yards on 11 carries, one of which went for a touchdown, in the 28-14 defeat.

With Adams re-signed, the Jets now have him paired with Johnson and La’Mical Perine, each of whom is under contract. Veteran rusher Frank Gore, currently third on the NFL’s all-time rushing list at exactly 16,000 yards, remains a free agent. Gore, the Jets’ top rusher from last season after Le’Veon Bell’s release, is 726 yards away from tying Walter Payton for second place behind Emmitt Smith. 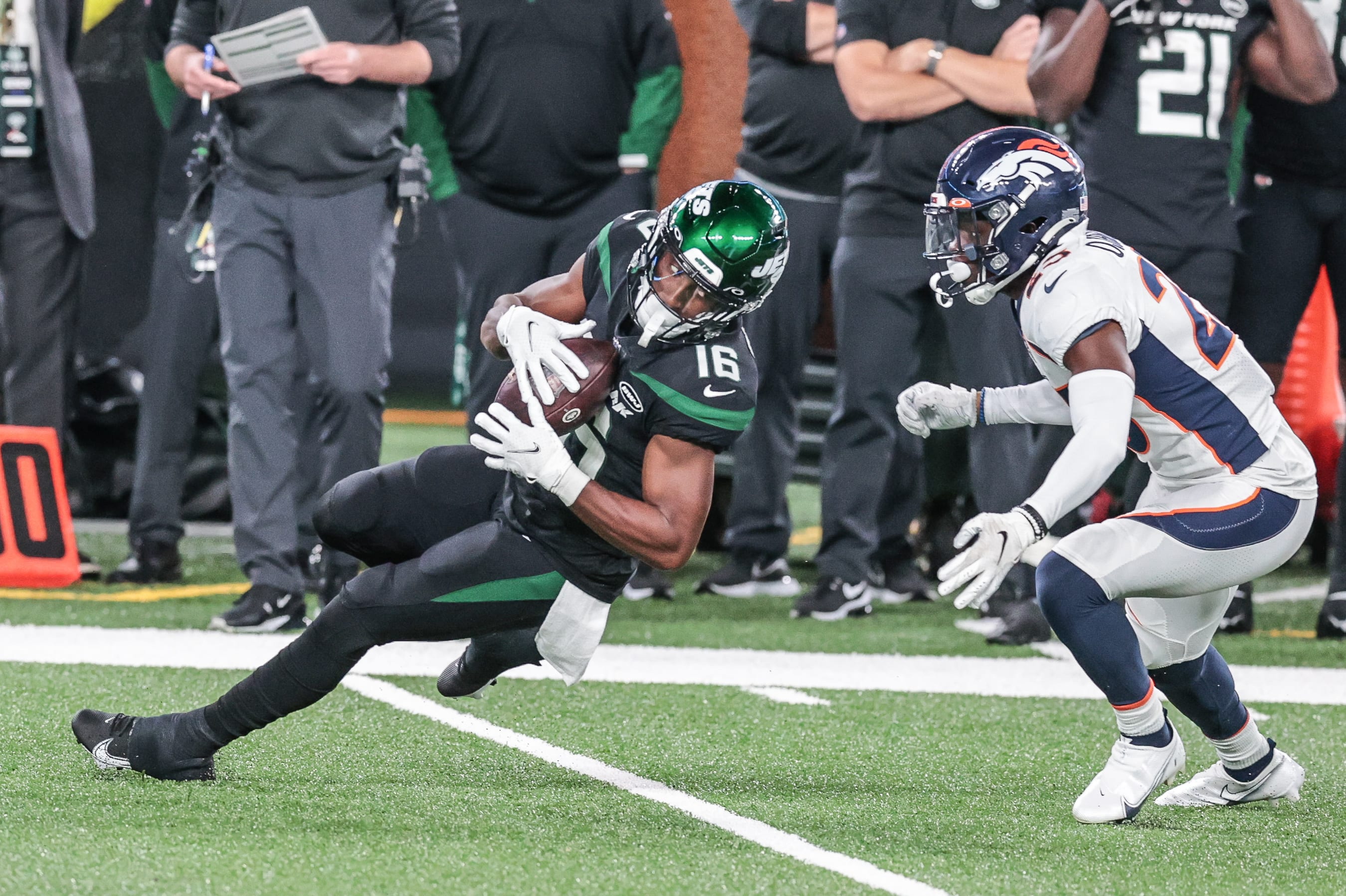 Smith, a former quarterback, earned 167 yards on 17 receptions in a dozen games with the New York Jets last season.

Fun fact on Smith: He was the fastest player on the team last season. Hit a max speed of 21.93 mph, per @NextGenStats

Per ESPN’s Rich Cimini, the New York Jets are bringing back receiver and exclusive rights free agent Jeff Smith. The former quarterback is set to enter his third NFL season after going undrafted from Boston College in 2019.

Smith has earned 179 yards on 18 receptions over his two New York seasons. His rookie year was marred by an injury shortly after earning his first career NFL reception, but he served as a depth option last year, partaking in 12 games (starting four of them). Smith’s most notable contributions came in a nationally televised loss to Denver in October through an 81-yard performance on seven receptions, each setting new career-bests. He originally appeared on the Jets roster in 2019 despite a hamstring injury shortening his training camp experience.

Smith is the second Jets free agent receiver to ink a new deal with the team, joining the unrelated Vyncint Smith. Breshad Perriman is the only receiver that has yet to re-sign in New York.

After a freshman season as BC’s quarterback, Smith moved over to receiver, though he was still used to throw on occasion through trickery, notably throwing a touchdown pass in the Eagles’ Quick Lane Bowl victory over Maryland in 2016. Smith’s speed has drawn positive reviews in New York and could help him earn a roster spot. Super Bowl XL MVP and former Jets offensive assistant Hines Ward offered Smith a positive review during training camp activities last season.

“The potential’s there with Jeff,” Ward said in a report from the Associated Press. “It’s just a matter of getting some reps with the first team and getting that experience. Sometimes, being an undrafted guy, you put more pressure on yourself to go out there and perform with the first group. And sometimes it’s almost too much pressure that he puts on himself.”