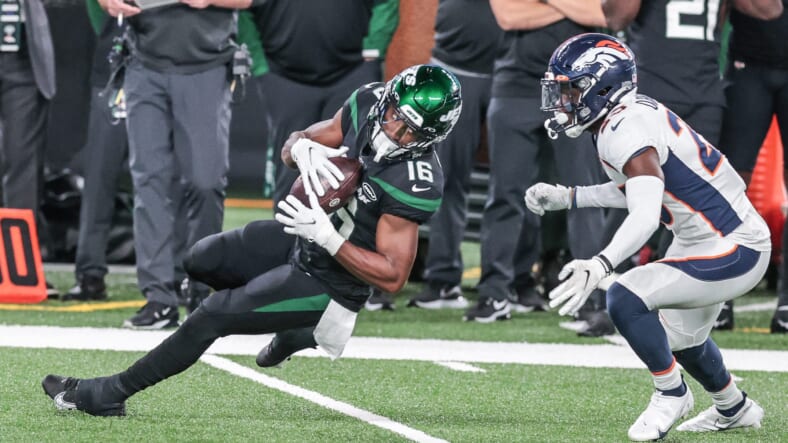 Smith, a former quarterback, earned 167 yards on 17 receptions in a dozen games with the New York Jets last season.

Fun fact on Smith: He was the fastest player on the team last season. Hit a max speed of 21.93 mph, per @NextGenStats

Per ESPN’s Rich Cimini, the New York Jets are bringing back receiver and exclusive rights free agent Jeff Smith. The former quarterback is set to enter his third NFL season after going undrafted from Boston College in 2019.

Smith has earned 179 yards on 18 receptions over his two New York seasons. His rookie year was marred by an injury shortly after earning his first career NFL reception, but he served as a depth option last year, partaking in 12 games (starting four of them). Smith’s most notable contributions came in a nationally televised loss to Denver in October through an 81-yard performance on seven receptions, each setting new career-bests. He originally appeared on the Jets roster in 2019 despite a hamstring injury shortening his training camp experience.

Smith is the second Jets free agent receiver to ink a new deal with the team, joining the unrelated Vyncint Smith. Breshad Perriman is the only receiver that has yet to re-sign in New York.

After a freshman season as BC’s quarterback, Smith moved over to receiver, though he was still used to throw on occasion through trickery, notably throwing a touchdown pass in the Eagles’ Quick Lane Bowl victory over Maryland in 2016. Smith’s speed has drawn positive reviews in New York and could help him earn a roster spot. Super Bowl XL MVP and former Jets offensive assistant Hines Ward offered Smith a positive review during training camp activities last season.

“The potentialâ€™s there with Jeff,â€ Ward said in a report from the Associated Press. â€œItâ€™s just a matter of getting some reps with the first team and getting that experience. Sometimes, being an undrafted guy, you put more pressure on yourself to go out there and perform with the first group. And sometimes itâ€™s almost too much pressure that he puts on himself.â€