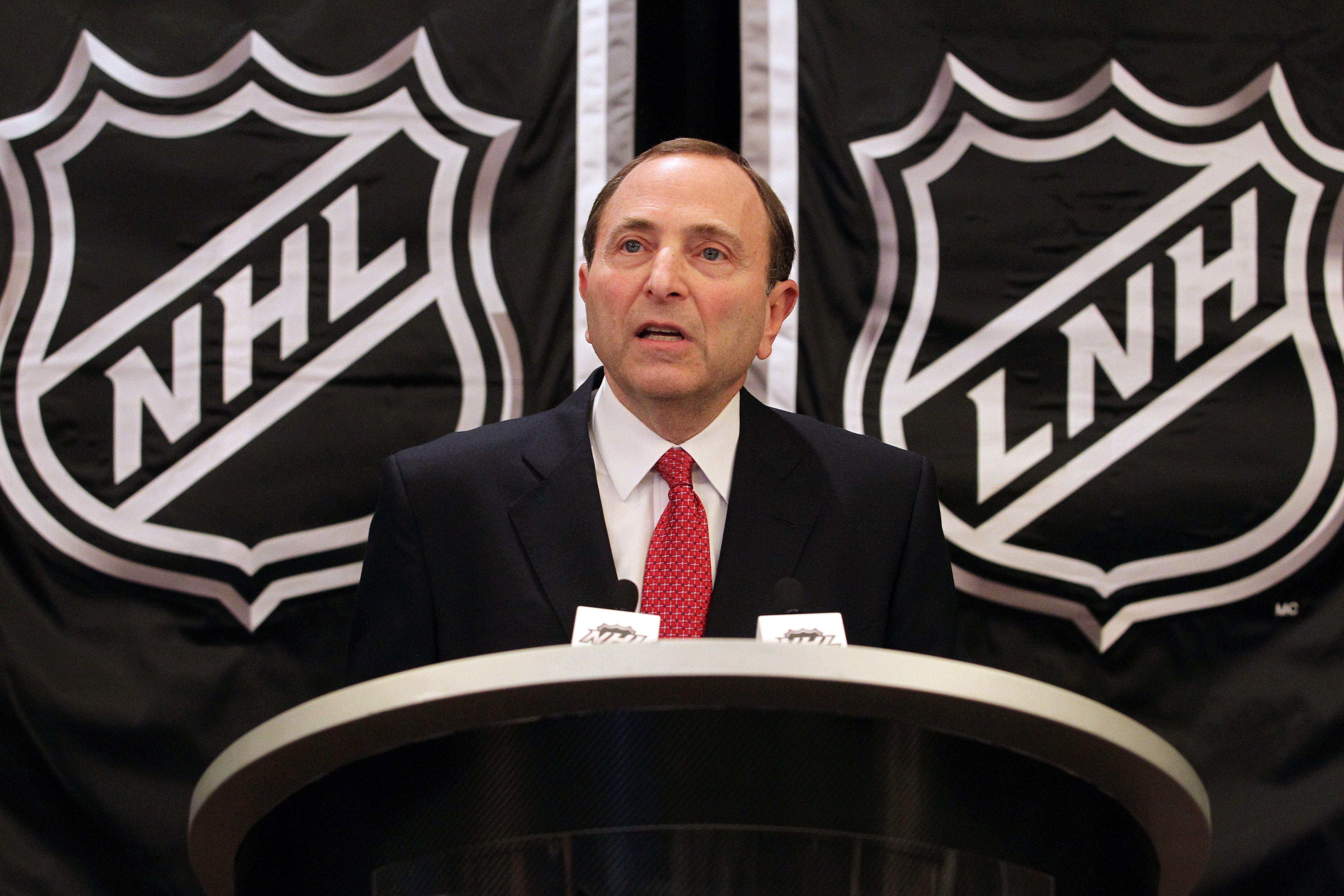 The NHL has officially suspended any further league play, indicating the playoff runs by the New York Rangers and Islander may have been stifled from something other than their own misfortune.

The Corona Virus has caused all 31 teams to hat lt play in the United States, Canada, and around the world.

The NHL released the following statement:

“In light of ongoing developments resulting from the coronavirus, and after consulting with medical experts and convening a conference call of the Board of Governors, the National Hockey League is announcing today that it will pause the 2019‑20 season beginning with tonight’s games.

“The NHL has been attempting to follow the mandates of health experts and local authorities, while preparing for any possible developments without taking premature or unnecessary measures. However, following last night’s news that an NBA player has tested positive for coronavirus – and given that our leagues share so many facilities and locker rooms and it now seems likely that some member of the NHL community would test positive at some point – it is no longer appropriate to try to continue to play games at this time.

“We will continue to monitor all the appropriate medical advice, and we will encourage our players and other members of the NHL community to take all reasonable precautions – including by self-quarantine, where appropriate. Our goal is to resume play as soon as it is appropriate and prudent, so that we will be able to complete the season and award the Stanley Cup. Until then, we thank NHL fans for your patience and hope you stay healthy.” 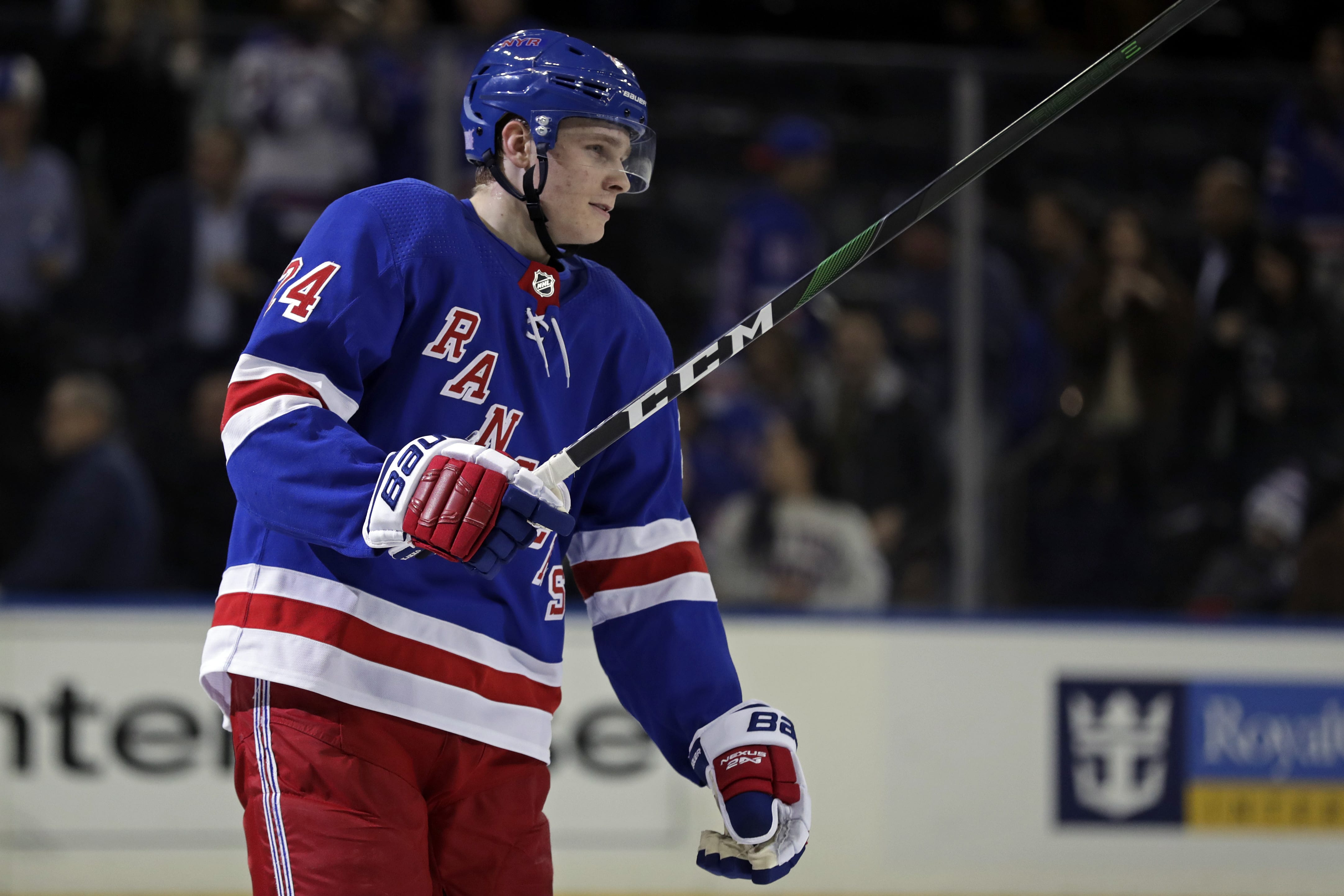 When the New York Rangers drafted Kappo Kakko, many were expecting, and not hoping that he would come in and have an immediate impact in the NHL. However, the Austen Matthews like performances has not happened, leading many to be disappointed with the young Finn.

The first thing to remember is that he just turned 19 years old. Unlike Matthews, who does have a unique talent that we might not see duplicated, was born in the United States.

Kakko was born and raised in Finland, and an 18-year-old, coming to the United States, let alone coming to New York City, is quite a lot to digest. But the bottom line is that Kakko has what it takes to be one of the top players in the NHL for many years to come. Patience is required.

So right out the gate, Kakko had many ups and downs. The season started slow, and Kakko was starting to feel the pressure.

“Hockey isn’t much fun for me right now. Things haven’t started to roll. Sometimes I feel I could get more ice time and play on the top line. I understand why I haven’t got that chance: my performances haven’t been that good.”

It is at this point to remember that despite being a second pick overall, it makes little sense to compare Kakko to Connor McDavid or Matthews, who was born to play the North American style of hockey and are centers. At this point, I am not going to go in long details about the difference between the two styles, other than to say that there are some notable differences.

This also leads to the reminder that much of this could have been due to difficulty in adapting to his new environment far from home. It might be more realistic to compare him to some other Europeans who started playing over here when they were 18.

One such player that comes to mind is a winger that I personally saw for the first time, Carolina Hurricanes winger Andrei Svechnikov. In his rookie season, Svechnikov had 20 goals and 37 points in 82 games. Now, after a year in the league, he is quickly becoming a sniper who’s ready to score goals on a regular and consistent basis. Someone with the natural talent that Kappo has can hopefully continue to develop and become a star for the New York Rangers for the foreseeable future. 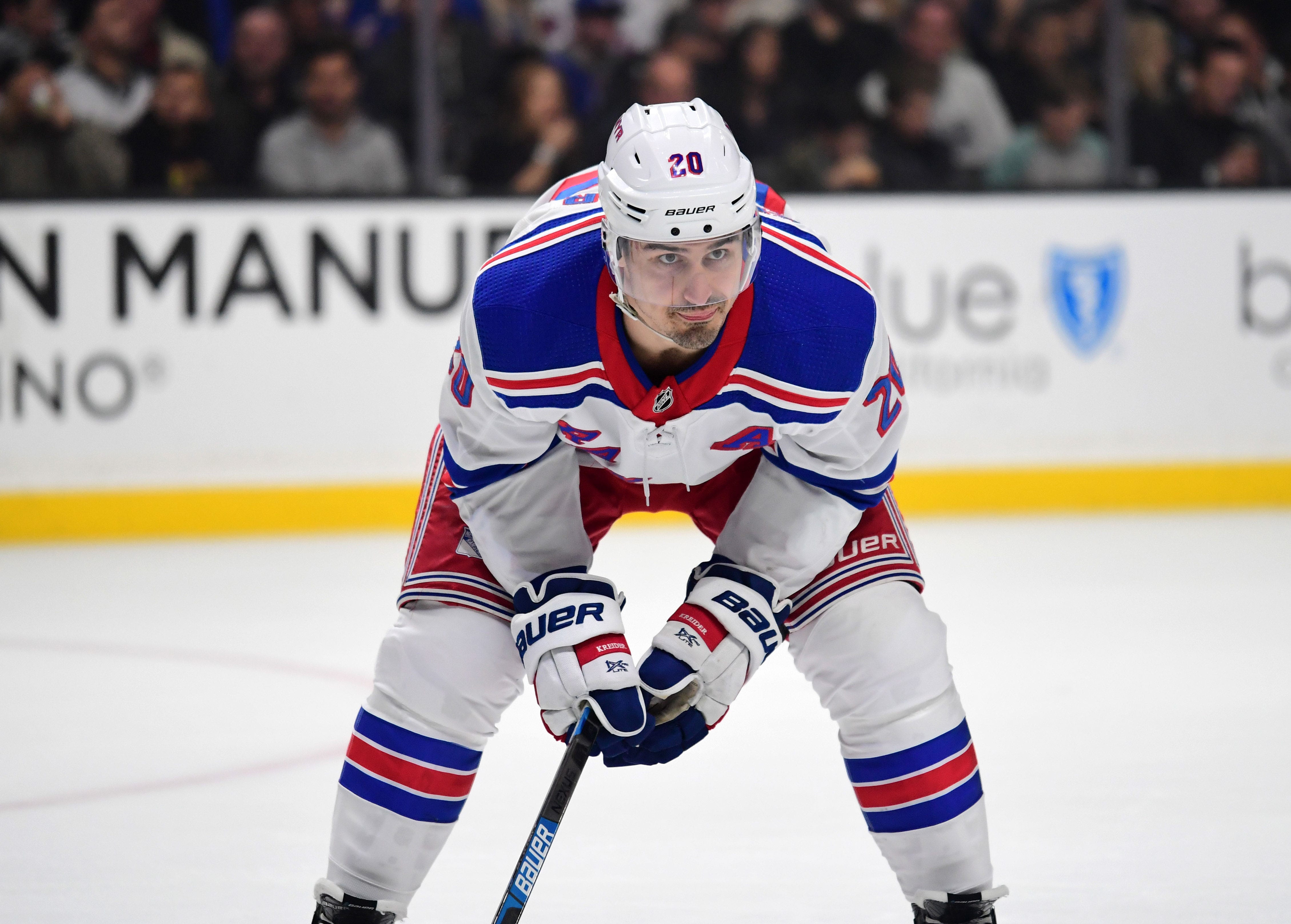 One of the puzzles that the New York Rangers need to figure out for their future is whether to trade or keep forward Chris Kreider. The dilemma is that the 28-year-old forward is in the final year of his 4-year, 18.5 million dollar contract. With the February 24 trade deadline a month away, the Rangers are in a tough situation as to whether to pay up and keep him or move him to another team. Unless the Rangers really hit a big losing streak in the next month, they should not trade the veteran and do everything possible to keep him for the future

While it is true that Kreider would bring a lot on the trade market, it might be wise to hang on to him to see if he will resign either before the trade deadline or after the season when he hits the free-agent market.

One of the negatives to signing him is that his people will ask too much for a player who will ask for a much of money but has yet to garner more than 53 points in a season.  But Kreider will bring more to the Ranger team than just points. He has blazing speed and an ability to finish that makes him difficult to contain.

In the most recent Ranger win, when the big 6-foot-3 wing camped out in the low slot and shoveled in the rebound chance to give the Blueshirts the victory. This dominant net-front presence and success at winning puck battles mean that opponents really have their hands full. This is not something that grows on trees in the NHL.

Could the New York Rangers Pull an Aroldis Chapman like Move?

If you remember back to 2016, the New York Yankees traded Aroldis Chapman to the Chicago Cubs, and in return picked up a player named Gleyber Torres. Then the following winter, the Yankees resigned Chapman as a free agent, while also picking up what looks like a future MVP candidate. Would it be possible for the Rangers to trade Kreider, then make a strong push to re-sign him in the off-season?  It would be a bit of a dice roll, but it would be a scenario that should really benefit the team if they picked up another key player and kept Kreider for this young rebuilding team. It will be an interesting month for general manager Jeff Gorton and President John Davidson indeed. 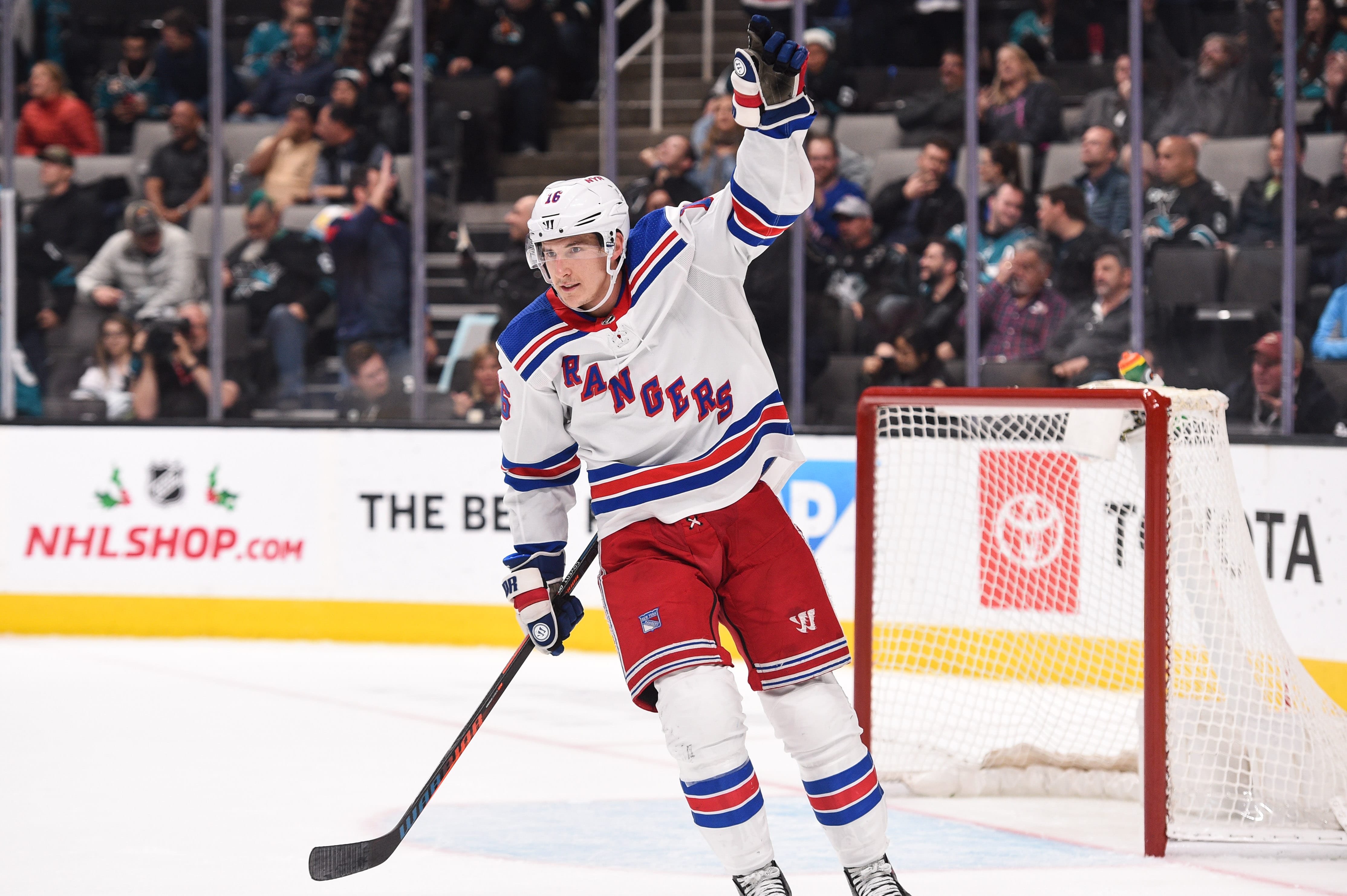 The New York Rangers are facing a critical five-game stretch coming off the NHL holiday break. The Blueshirts are sitting eight points out of the last wild card spot in the Eastern Conference and must make a strong showing during these key match-ups in order to keep that wild card spot within reach. The challenge for these next five games comes in two parts.

The Rangers will face the Carolina Hurricanes in their only home matchup of this stretch. The Hurricanes are 23-13-2 on the season but are facing a two-game losing streak after giving up eight goals in their last game to the Toronto Maple Leafs. The good news for the Rangers is that Carolina has gone 5-22 in the previous 27 meetings in New York.  Nonetheless, the Rangers will have to deal with one of the better offenses in the league. The Blueshirts will then travel to Toronto on Saturday to face the Maple Leafs in an Original Six, “Hockey Night in Canda” matchup. The Leafs defeated the Rangers last week 6-3 at MSG.

Leaving their golf clubs behind, the Blueshirts head out west for three games against Edmonton, Calgary, and Vancouver.  These teams sit in third, fourth, and fifth places, respectively, in the mediocre Pacific Division.

On New Year’s Eve, while many of us are preparing to watch the ball drop in Times Square, The Rangers will square off with the Oilers in a 9 PM (ET) face-off. After a strong start to the season, the Oilers are 3-6-1 over the last ten games. On January 2nd, the Rangers will travel to Calgary to face the Flames, who have been shutout twice in their previous five games. The Rangers will then be the late game feature for “Hockey Night in Canada” when they travel to Vancouver on January 4th for a 10 PM (ET) game against the Canucks.  Vancouver came into the holiday break on a three-game win streak, with their most recent victory coming against Edmonton.  We will all get a clear idea of where the Rangers playoff hopes stand after these five games. 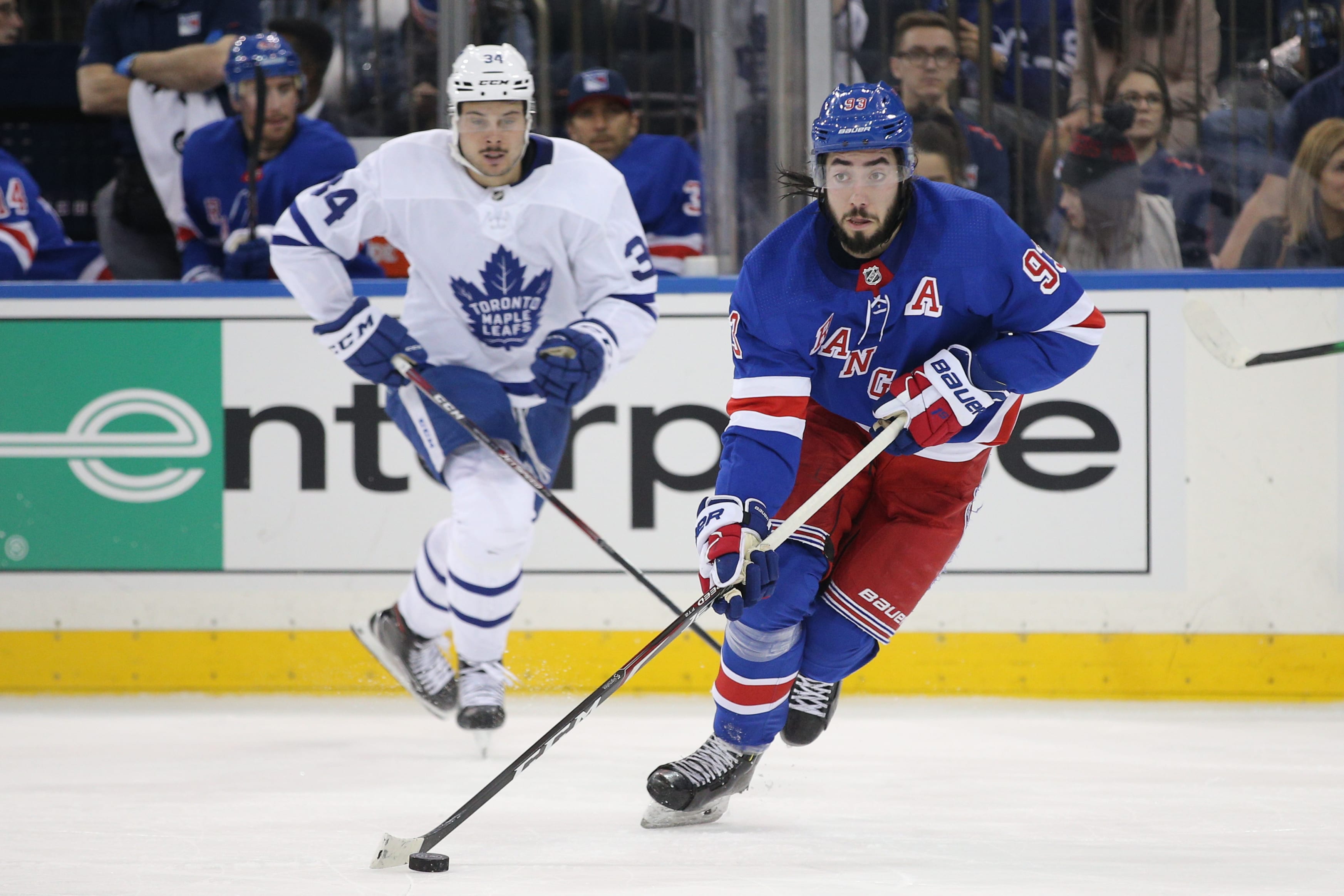 The New York Rangers and parts of the state of California have had similar problems recently. Parts of California have been cutting electricity so that their electrical equipment would not start widespread fires. One such shutdown affected 25 counties around the San Francisco area. The Blueshirts are having an outage on their power play, going 0-3 Friday night to make it nine straight times they have failed to score on their man-up opportunities.

In Friday’s loss to Toronto, they went 0-for-3 on the power play, extending their streak to nine man-advantage opportunities without a goal. One of the criticisms of the Blueshirts has been the reluctance to take shots during their man-up situations.  Their head coach agrees. “Our problem — whether it be five-on-five or five-on-four — is we too often will only shoot the puck if we think we’re going to score,” coach David Quinn said. “We will not shoot the puck if we think we’re going to create a chance for somebody else. And that’s why, over the last year-plus, our shooting percentage has been so high in the league. It’s because too often we only shoot when we think we’re going to score.” The Rangers’ hesitancy to shoot has been amplified in the last three games, where a timely goal could have made a drastic difference.

How can the power play improve?

Head Coach David Quinn and his coaching staff have tried to get the message across to their players about the recent power play performances.  Quinn wants the Rangers to be more committed to getting the puck and bodies to the net instead of playing on the outside while in search of the perfect goal. He has stated in the past that “We talk about where people are [on the ice] and whatnot, but I mean, you have to have pace on your power play. You have to be ready to shoot — you can’t stand there and stick-handle it. ”

Sunday’s chance to turn things around

The Rangers will get an opportunity to fix their power play and end their three-game losing streak when they host Anaheim on Sunday afternoon. The Ducks are situated at the bottom of the Western Conference standings but do rank in the top ten in power plays defended.  Henrik Lundqvist will get the start in goal for the Blueshirts. 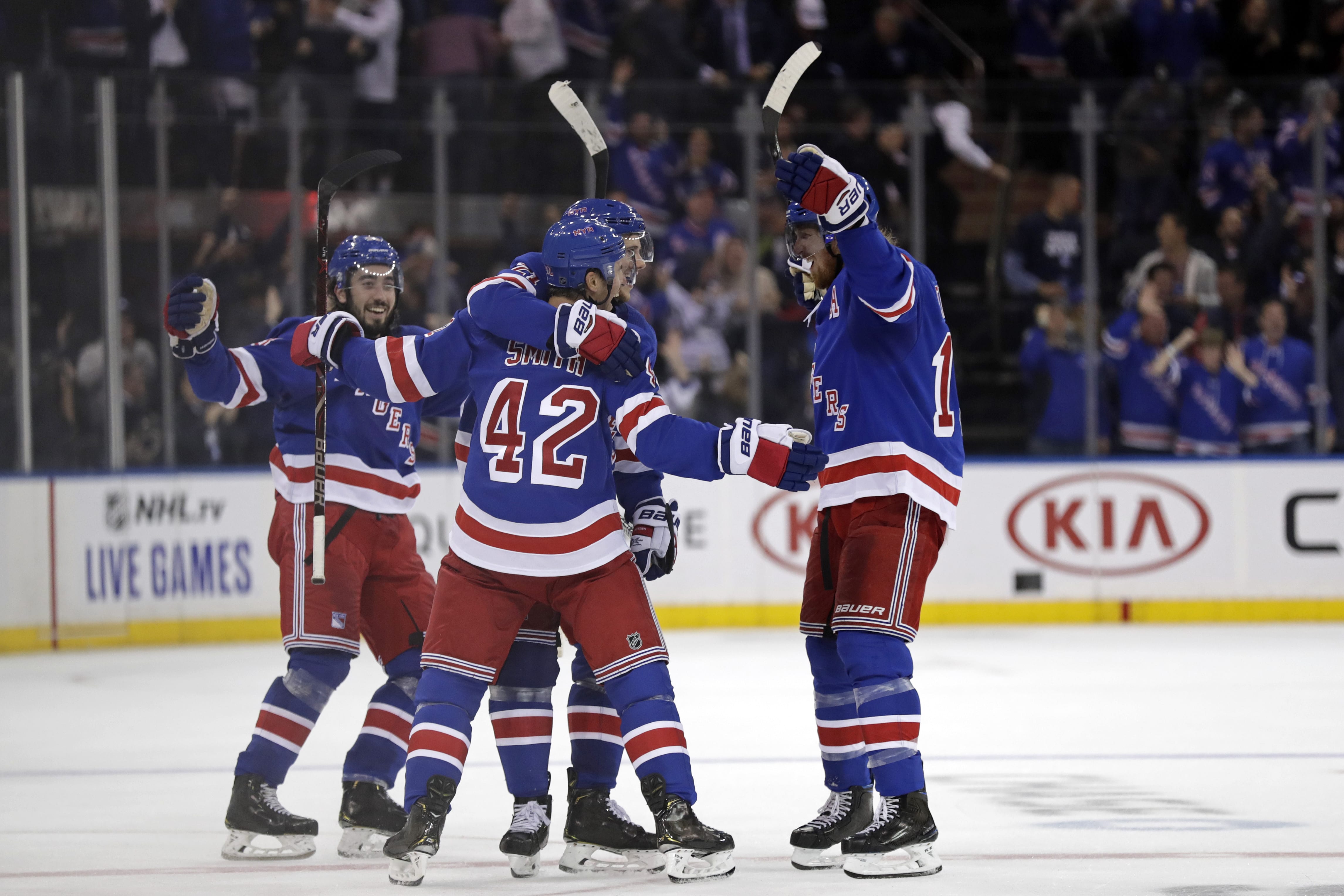 The New York Rangers opened their season having high expectations in which they beat the Winnipeg Jets 6-4 in a wild back-and-forth home opener.

“It was exciting,” said Mika Zibanejad. “It was a hard-fought game… we didn’t play that well in the first two, I thought we did some good things but not often do you get a good 20 minute period and get a win from that.”

Marc Stall scored the first goal of the season in the first period to give the Rangers a lead and then the game was tied up with a goal by Mark Scheifele in the remaining three minutes of period one.

Jacob Trouba’s first goal as a Ranger comes against his former team pic.twitter.com/rtTaQyCHoz

The Rangers broke open the game in the third period with three unanswered goals, one being an open-netter. Mika Zibanejad, who only had 30 goals last season, scored first followed by Brett Howden and Brendan Smith.

Beginning his 15th season in the NHL, Henrik Lundqvist allowed the four goals on 47 shots.

“I feel really good,” said Lundqvist before the game. “I’m happy with where I am physically, technically and mentally. My timing is good. I’m moving well.”

The New York Rangers will play their next game Saturday against the Ottawa Senators at the Canadian Tire Center.