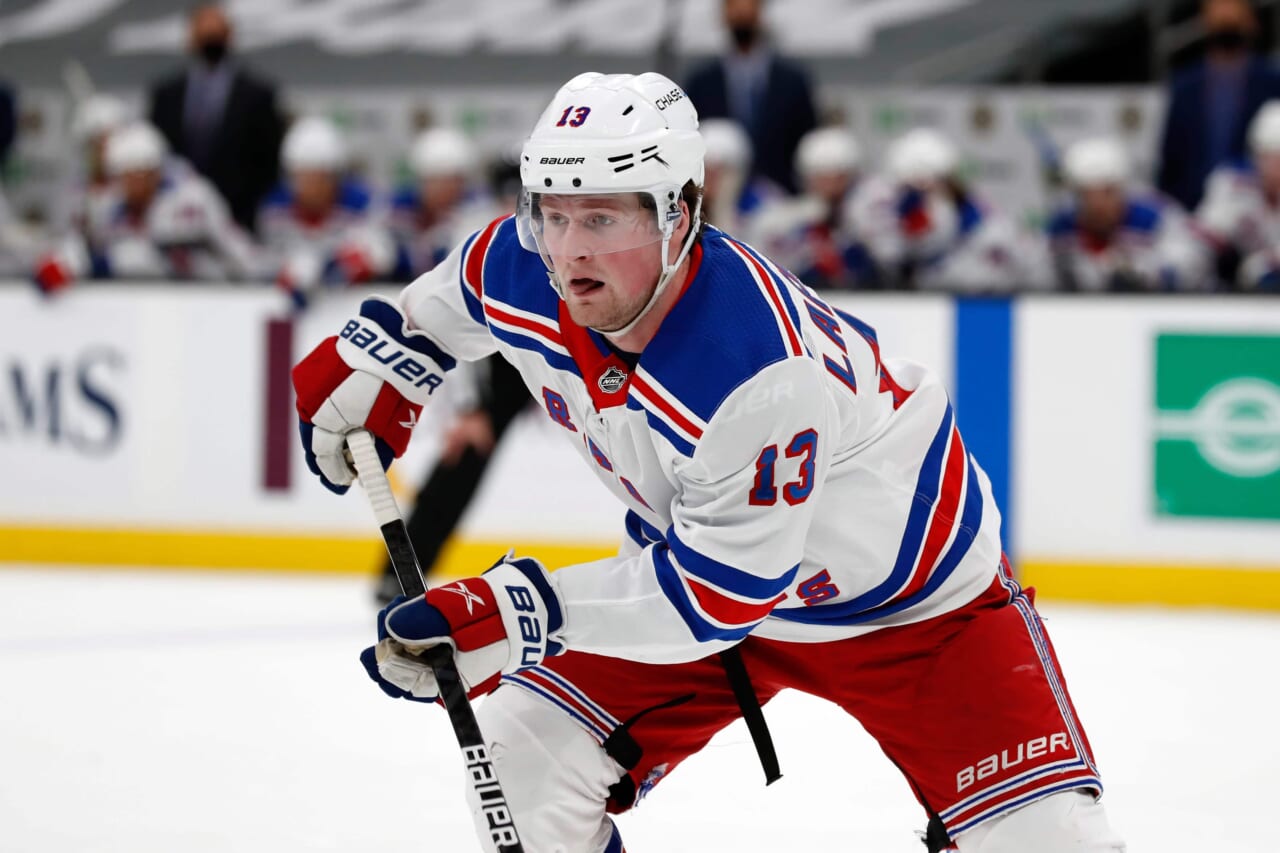 Lafreniere continued his torrid pace in the Rangers’ Sunday victory, scoring an equalizer and assisting on K’Andre Miller’s winner.

No. 13 is slowly turning into the New York Rangers’ lucky number as the Stanley Cup playoffs loom.

Alexis Lafreniere’s scoring surge hit a new height on Sunday evening, as the sophomore pushed his points streak to six games. The 5-4 overtime win over the Buffalo Sabres featured Lafreniere’s first multi-point game since Feb. 24: he first put in a second period equalizer that set the tone for the Rangers’ league-best 22nd comeback win of the season, which was sealed through K’Andre Miller’s extra session tally, on which Lafreniere earned the primary assist after Andrew Copp forced a Buffalo turnover.

The steal.
The pass.
The shot.

Miller, Sunday’s hero, was quick to praise not only Lafreniere’s set-up but his strong pace in the second half of the Rangers’ season.

“Laf has been unbelievable this second half. He’s really stepped up and contributed to the team a great amount, so it’s really cool to see and I’m happy for him,” Miller said in video from SNY. “You see it day in and day out, his work ethic in practice when he gets to the rink. He can kind of just flip that switch and do him. It’s nothing crazy, but he’s been really good.”

Though the Rangers (42-19-5) seemed pleased with the progress that Lafreniere, 20, has made in his second season, the active scoring streak has become a form of conventional, traditional improvement that justifies the hype that surrounded him as the top pick of the 2020 NHL Entry Draft. Some felt that it was merely an effect of Lafreniere’s inclusion on the top forward line alongside Chris Kreider and Mika Zibanejad, a run of relative glory ended when head coach Gerard Gallant inserted Copp’s fellow trade deadline newcomer Frank Vatrano into the top line. Vatrano, formerly of the Florida Panthers, has justified the promotion with four goals over his first five games in blue, including two in Sunday’s opening period. Further controversy surrounded Lafreniere when he was relegated to the bench for most of the third period of the Rangers’ disastrous visit to New Jersey on Tuesday.

But Lafreniere is proving that his surge is no fluke in his return to the third line alongside Filip Chytil and Barclay Goodrow. The former has earned assists in each of his last two games, including the primary on Lafreniere’s Sunday goal that stopped a streak of three consecutive Buffalo tallies.

While some saw the push back to the third line as a demotion for the top pick, Lafreniere was happy with such placement, primarily for the fact it situated him back at his traditional spot of left wing.

“It was good to come back to my natural side,” Lafrenière said in video provided by the Rangers. “I can play both sides, and we have so many options in our forward group. I think we’re really deep. So wherever I need to play, I’ll be ready, so it was a good game for everybody…I feel like it’s more natural for me coming back into my own zone. It’s things like that where you always a little late when you aren’t used to it.”

The shift paid immediate dividends: Lafreniere opened scoring in the Rangers’ 5-1 win over the Pittsburgh Penguins last Friday, pacing a complete effort that some saw as the team’s best win of the season.

“When we talked the other day, he was fine with it. He was happy, he just wants to go out and play,” Gallant said after Friday’s win, per Larry Brooks of the New York Post. “He was really good. Good line switch.”

Lafreniere’s surge has allowed him to set new infantile career-bests in goals (15) and points (25). The Blueshirts have gone 5-1-0 during Lafreniere’s scoring streak, allowing them to keep pace in the Metropolitan Division’s packed division title race. New York is four points behind Carolina for the top seed (the Hurricanes have a game in hand as well) while they’re also one point behind Pittsburgh for the runner-up spot (though the Penguins have played one more game).

The Rangers’ return to action features another round with the Penguins, as they’ll square off again on Tuesday night in Pittsburgh (7 p.m. ET, MSG).