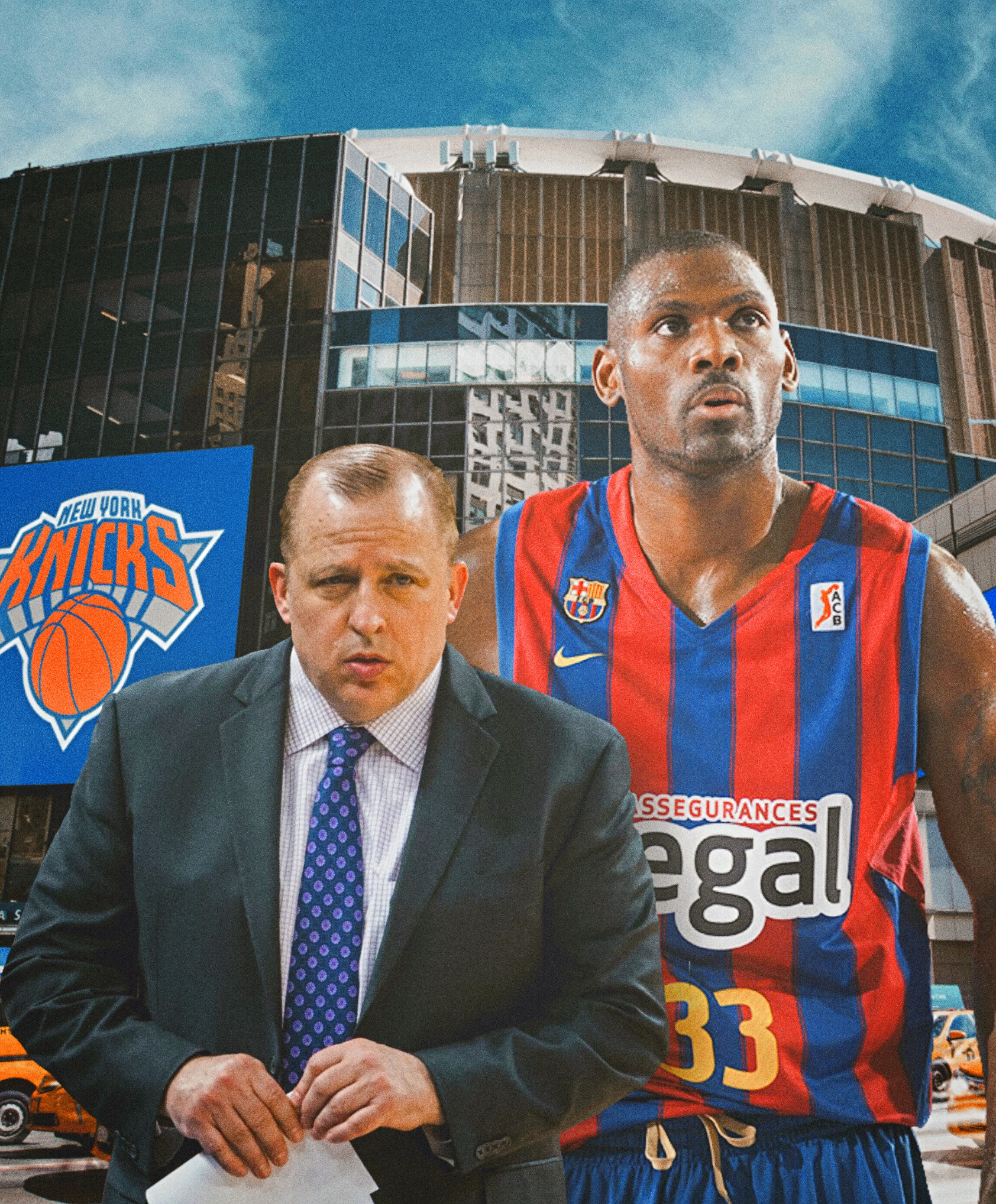 Pete Mickeal was dejected. Even after a solid showing in the NBA Shaw Summer Pro League in Boston, Mickeal still couldn’t make the cut.

Jeff Van Gundy, then New York Knicks head coach, told him to wait for his turn. The Knicks, coming off an NBA Finals appearance in the previous season, were loaded at the wings with Latrell Sprewell, Allan Houston, and Glen Rice.

Mickeal, an All-American honorable mention in his senior year, already felt embarrassed when he ended up as the last pick of the 2000 NBA Draft after a productive two-year stint with the Cincinnati Bearcats, one of the best teams in the country at that time.

The Dallas Mavericks used the 58th pick on him but quickly shipped him to New York along with Erick Strickland for John Wallace and Donnell Harvey.

So the news of being relegated to the reserve list was another dampener.

It was Tom Thibodeau, a Van Gundy assistant at that time, who kept his spirits up.

“I was disappointed, and Thibs was always positive, and he said, ‘Listen, man! Just keep working.’ And I would work with Thibs that year,” Mickeal told Empire Sports Media on the phone.

Thibodeau and Mickeal forged a good relationship as they were inseparable that year. Mickeal became Thibodeau’s project. They hit the weight room early in the morning before other Knicks players showed up in their old practice facility in SUNY-Purchase.

“Then he takes me to the court and worked me out hard. So once practice comes, I’m really, really ready to go. And after the two-hour practice, Thibs will work me out again. He was always positive. He said, ‘Keep the right mentality. Don’t worry about not playing. Just work your ass off.’ That’s all I remember him saying,” Mickeal recalled.

That laid the groundwork for Mickeal to flourish in a legendary career overseas. His NBA career never took off, but thanks to another Summer League stint under Thibodeau, other doors opened for him.

“You always take a little piece of every coach you had during your career, and you take that mentality as a player, so I was fortunate to have a coach like Thibs,” Mickeal said. “I played for Thibs in the Summer League for two years. Those games helped me get attention in Europe. I was averaging 18 pts per game, and Thibs played me for 30-35 mins per game. So I had a chance to show what I can really do.”

Mickeal spent 15 years overseas playing in the Philippines, Korea, Greece, Spain, and Argentina, where at the tail end of his career, he faced a young Luca Vildoza.

“I knew Vildoza was good. I know his agent very well. And he’s played for the coach that’s most similar to Thibs in Europe. His name is Dusko Ivanovic,” Mickeal said.

“He and Thibs have the same mentality when it comes to coaching,” Mickael said. “They are coaches who you have to play defense, or you won’t play. So (Vildoza) played for tough coaches. He can play. If he’s healthy and he gets a chance, let’s see what happens.”

Mickeal won a dozen Liga ACB crowns and a Euroleague title, making him the winningest American player in Europe.

When his legendary overseas career was over, Thibodeau again gave him the opportunity to return to the NBA.

Mickeal reached out to Thibodeau, the head coach and Minnesota Timberwolves team president at that time.

“Right now, we don’t have a coaching opening, but we got something that you might like it better,” Mickeal said, recalling his conversation with Thibodeau. “It turned out to be true. I love being in the front office. I love scouting.”

It was like 2000 all over again, albeit the coaching and the development were off the court. Mickeal absorbed everything like a sponge as he got his feet wet into the NBA front office.

“Working for Thibs is great being your first job coming out of playing. It will really teach you the work ethic you need to be a great scout. Because the type of work you do when Thibs is your boss is tripled compared to any other team,” Mickeal said.

His familiarity with Euroleague players and NBA players playing overseas helped him seal the deal. The job taught him to become innovative and go the extra mile to get the intel on the players. He scouted not only in Europe but also players in the NBA, G League, and even in Asia. He was in meetings with coaches and other front office staff that made him appreciate how rosters are constructed in the NBA.

Nerlens Noel was one of the players he scouted extensively when the beanpole center was still playing in Oklahoma City Thunder. The former lottery pick has been on Thibodeau’s radar as far back as 2018. So he was not surprised the Knicks targeted Noel last summer.

“Obviously, I’ve been in the front office, so I can appreciate why teams are put together the way they are, like Nerlens Noel, for example. When I scouted him when he was with OKC, I’ve always liked him. I’ve always thought he’s a really good backup center,” Mickeal said.

“It’s very difficult to find a backup center that can give you rebounds and points every game and can switch screens who can move his feet well on the perimeter. It isn’t easy with all the switching the NBA does. And his body type fits today’s NBA. He’s got the long, slender body type, but he’s got a huge wingspan. So that really helps in deflection and playing straight-up defense with your hands in the air, showing your length. That’s difficult to find in the NBA — a mobile backup center,” Mickeal said. “I thought they did a great job in finding a guy like that. And the contract they got him for, I thought that was great.”

After Noel’s solid play last season, the Knicks locked him up to a $32 million, three-year contract this summer, with the last year as a club option making it a team-friendly deal.

Noel’s scouting report was just one of the hundreds Thibodeau received each week when Mickeal was scouting for the Timberwolves.

“We write all these (scouting) reports each game, and a hundred reports are coming in each week, and the guys in the office told me that I make this list, and Thibs read every single report every week. And I was like, okay, he’s the coach, and he’s reading all these reports? That story sums him up,” Mickeal said.

”He reads the reports every scout has written, and he was also in the meetings that I was in, and he’s coaching at the same time. That’s a level of commitment that’s unearthly. It’s not normal. But that’s a great tribute to him because everything he got in his career was through hard work.”

Thibodeau has made a career transforming losing teams into playoff contenders. He made solid rotation pieces out of fringe players. He developed All-Stars and All-NBA players at every stop. Derrick Rose became the league’s youngest MVP under his helm and resurrected his career in Minnesota.

“Thibs’ player development is underrated. They’re not giving him the credit he deserves. They always say Thibs plays his guys too many minutes,” Mickeal said. “But the truth is he’s developing players.”

Mickeal himself largely benefited from Thibodeau’s developmental coaching on and off the court. He parlayed Thibodeau’s teachings into a successful overseas career and later on as a scout and now as a sports agent.

After two years with the Timberwolves, Mickeal moved on to scout for the Washington Wizards until he decided not to return last year and bet on himself. He put up the Miami-based Mickeal Sports Group, a sports agency specializing in sending American players to Euroleague and identifying young NBA prospects around Europe.

“It’s always been a dream of mine to get into the sports agent business,” Mickael said.

Mickeal prepared himself for his post-playing career by getting directly involved in all negotiations of his playing contracts from 2008 until he retired. While he thought coaching would have been great, he was grateful Thibodeau steered him towards the front office, which equipped him with the additional skill set and network necessary to set up his dream sports agency.

“Thibs gave me that opportunity to start with. Then I branched out from there. It worked out really well. It’s a really good business which I want to do for the rest of my career. I work with a lot of smart, analytics people. We got a marketing firm behind me, and we’ve hired some really, really experienced agents. After one year, it’s already exceeded expectations,” Mickeal said.

Mickeal is a Thibodeau lifer who, unlike the Derrick Roses, Jimmy Butlers, Taj Gibsons, never found success in the NBA. But he’s earned a seat at Thibodeau’s table because of his motto: being the hardest working guy in the room.

“I didn’t have long experience with him like other players have, but the short time that I’ve been with him, I can honestly say he doesn’t take shortcuts. If you work the way he works, he’ll give you the respect,” Mickeal said.