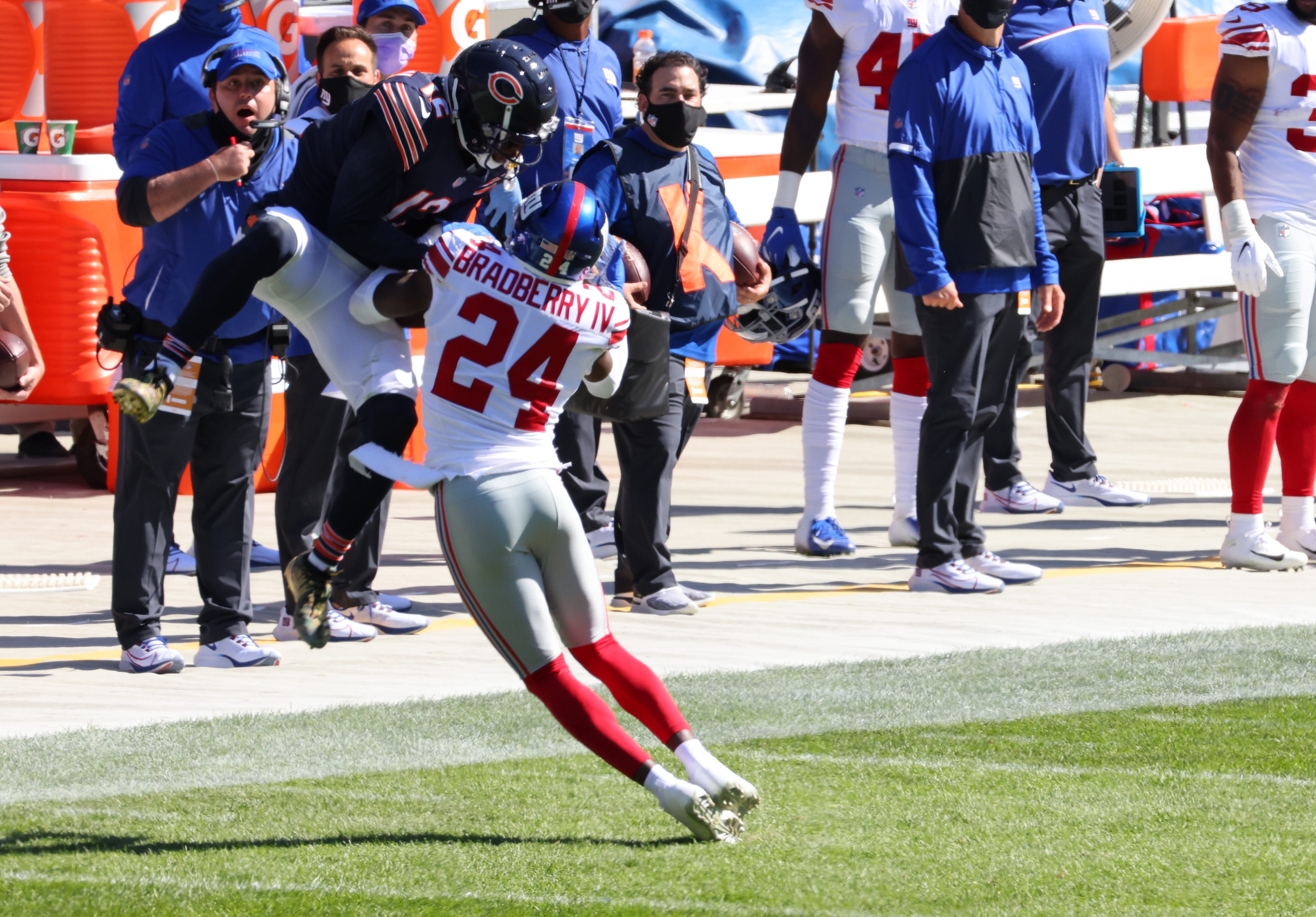 New York Giants cornerback James Bradberry is off to roaring start here in 2020. The former second round pick of the Carolina Panthers who the Giants sign to a three-year, $45 million contract this offseason could be headed to his first Pro Bowl appearance.

Bradberry leads the NFL with six passes defensed after two weeks and is making his presence known on the Giants’ defense. He is currently the second highest ranked corner in the NFL by Pro Football Focus.

Bradberry also has one interception and a forced fumble. Giants linebacker Lorenzo Carter was asked what in particular he sees in Bradberry’s game.

“Just his skill set, his ability to match up with the best receivers on the other team and actually matchup with them pretty well. He’s done a good job just coming in, accepting his role and doing well. We just need more of it. You saw he had that great play. He’s had a couple pass break ups. We just need that type of stuff to get where we want.”

New teammate Logan Ryan, who has never played on a losing season in his seven NFL seasons and knows a quality football player when he sees one. He was asked how much he knew about Bradberry before they both came to the Giants.

“No, he didn’t fly under the radar for me. I knew him in Carolina,” said Ryan. “He’s an extremely big corner, great patience, physical. This guy was the number one corner in a division where he matched up with Julio (Jones), he matched up with Mike Evans and (Chris) Godwin, and he matched up with Michael Thomas every week. That’s a tough job to play the number one corner in the NFC South, and he’s done a good job with that. I knew he was a good player. I knew he was a good player studying him, practicing against him, playing against him. He’s just a really good corner, and he’s playing like that. We need him to be that to be good on defense, and that’s what he’s doing. The name of the game at cornerback is consistency. Just doing it week in and week out, and he’s done a good job of that for two weeks. We all need to start playing like him, for him to be consistent and to be solid for us to allow me to move around and do what I do to allow our defense to be our defense. I think it’s building and the chemistry with the guys is building, but I think James has definitely done his job. We just need to translate it to wins.”

And that is coming. The Giants’ defense has been tightening up with each game. It won’t be long until the whole unit gets recognized like Bradberry has. 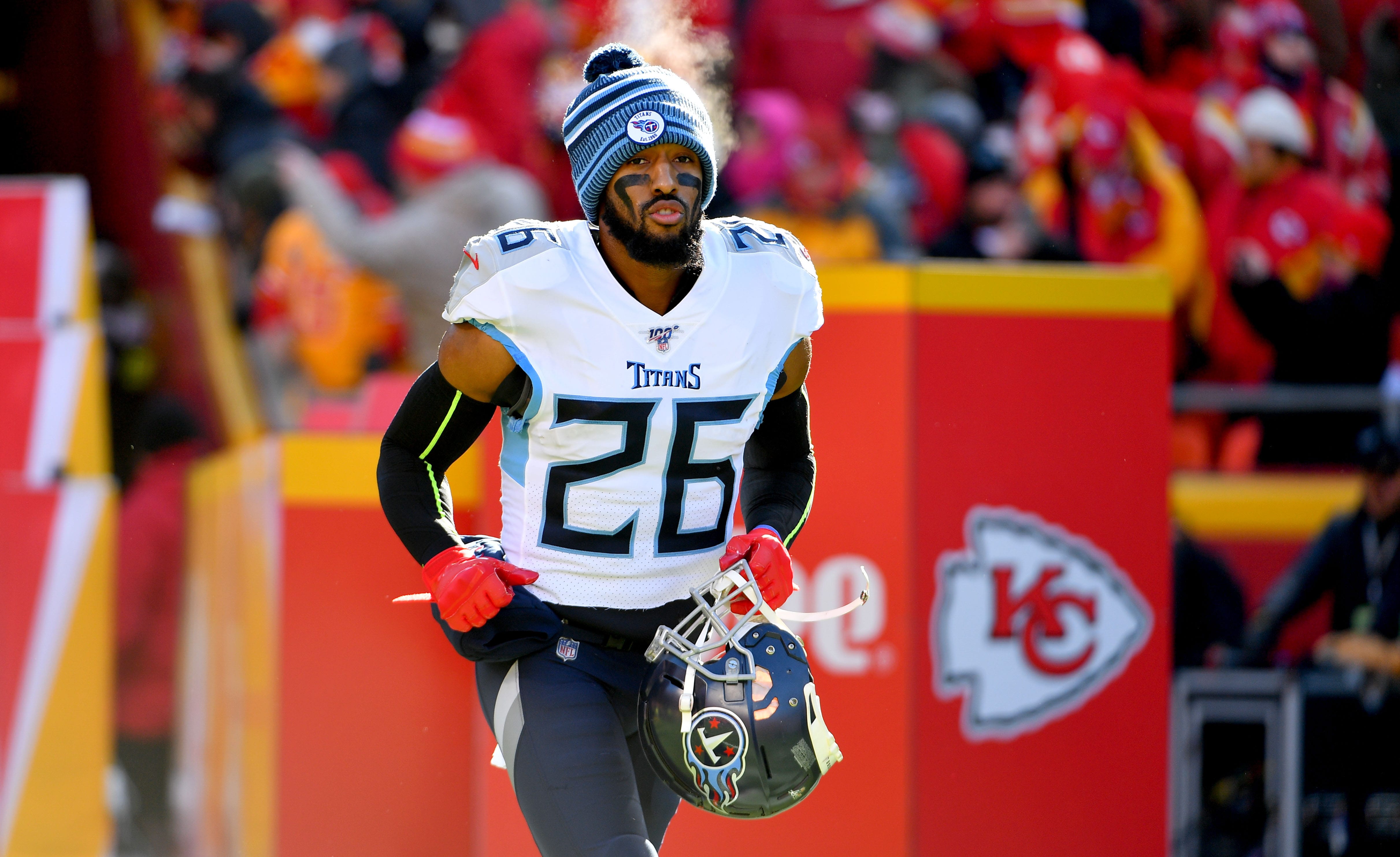 The New York Giants have had a spate of bad luck in their young, talented secondary. First, DeAndre Baker, a potential starter at cornerback this season, got himself jammed up down in Florida in an assault/robbery incident that resulted in him getting indicted and then placed on the Commissioner’s Exempt List.

Then, third-year cornerback Sam Beal decided to opt out of playing this year due to coronavirus concerns. Now, this week comes the new that stud rookie safety Xavier McKinney broke a bone in his left foot that required surgery and will miss at least three months.

The solutions could come from within, but common sense says it probably shouldn’t.

“Any injury to our roster is a hit to us because we care about every player on our roster,” said head coach Joe Judge. “But it’s our responsibility to have everyone developed and make sure the next man is ready to go.”

At safety, that next man is Julian Love, a fourth round pick out of Notre Dame in last year’s NFL Draft who started at safety the last four games of the 2019 season. The Giants could simply hand the job back to Love and be done with it, but again, common sense says they could do better.

That is why the Giants should probably pursue former Rutgers and New England Patriots defensive back Logan Ryan, who is still available in free agency. Ryan is well known to head coach Joe Judge and defensive coordinator Patrick Graham.

Ryan Dunleavy of the New York Post writes the Giants can certainly fit Ryan into their plans.

“A career 85-game starter, Ryan played 395 special teams snaps over his first three years with Judge as a special teams coach for the Patriots. Judge favors cross-training positions, and Ryan, 29, can play in the box, roam deep or lock into a one-on-one slot matchup.

The Giants’ reasoning for staying pat makes sense: With the NFL salary cap potentially dropping by 11.6 percent to $175 million per team in 2021, there is value in rolling over unused 2020 space (currently $25.6 million) to soften the blow when the team is more competitive. Ryan was willing to take a one-year, $10 million contract to return to the Tennessee Titans and initially wanted at least that annual salary to change teams.”

The Giants are apparently weighing their options. The salary cap will be going down in 2021 and they have a lot of mouths to feed. Evan Engram, Dalvin Tomlinson, Leonard Williams headline the list of players who will be free agents next year. With less cap room to play around with, they have to be smart with how they deploy their resources.

The rollover will go a long way in helping pay those young stars. McKinney will be back next year. So will Beal most likely and who knows about Baker. Using $10 million of that on Ryan, who could be seen as a band-aid for one year, may not be the direction the Giants feel like going.

In the interim, they appear to be content will sticking with Love next to Jabrill Peppers and free agent James Bradberry at one corner. They still have to fill the opening at the other corner and at slot corner. Rookie Darnay Holmes will likely win one of those spots with the other going to any number of the candidates in camp: Montre Hartage, Corey Ballentine, Chris Williamson, Grant Haley, Jarren Williams, Dravon Askew-Henry, KeiVarae Russell, Brandon Williams and Prince Smith.

None of those players would bring the stability that Ryan brings. Not that anyone can see, anyway. They are in a corner, no pun intended, and the only way out may be to spend. 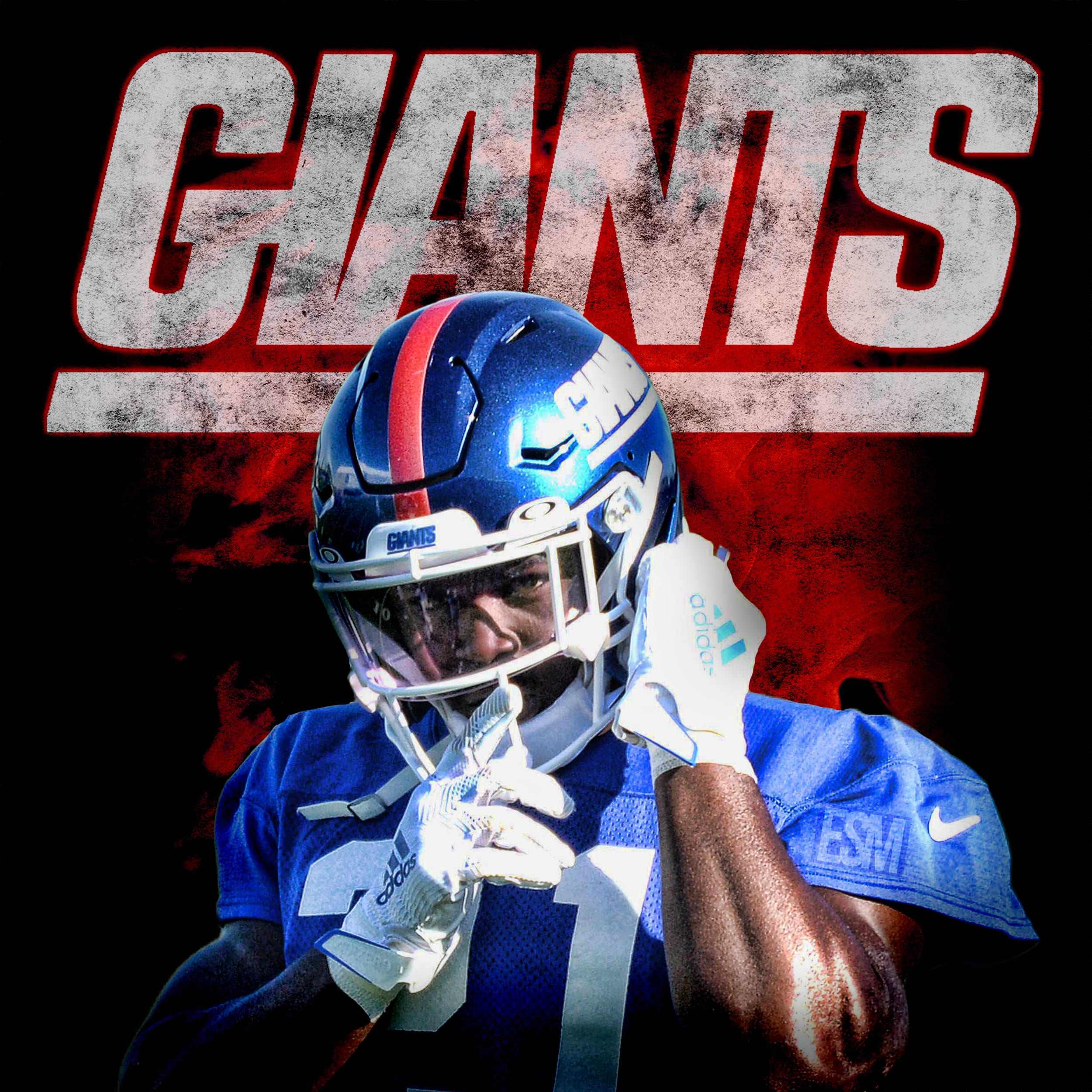 After one season in the Big Apple, the New York Giants can feel good about strong safety, Jabrill peppers. So far, Peppers has been a playmaking machine; the sky is the limit for him. In 2019, he only played in 11 games but still made an impact on every game.

Here are the three plays that stood out the most about:

Jabrill’s forced fumble against the Vikings

This forced fumble by Jabrill Peppers shows off his hustle and mentality, no easy touchdowns. Most importantly, it shows off Peppers’ ability to never give up on a play. Vikings running back Dalvin Cook had a walk-in touchdown, that was until Jabrill came out of nowhere.  After all, this is what the Giants’ defense needs, more playmakers who are willing to never give up on a play no matter what.

Jabrill’s pick-six against the Redskins

Jabrill Peppers only had one interception in 2019, that one interception was a pick-six against the Washington Redksins. This was truly one of the best highlights from 2019 because it was against Dwayne Haskins. Not to forget, Haskins laughed when the Giants passed on him in the 2019 draft, Peppers made sure to return the favor.

For example, Peppers had his ups and downs in coverage, this is an area for improvement in 2020. Lastly, Peppers was targeted 36 times and allowed 23 receptions, a 63.9 completion percentage allowed.

Jabrill’s forced fumble against the Cowboys

This play makes Jabrill’s top three plays because it shows off Jabrills’ play recognition. To clarify, Peppers was covering the deep route and noticed the pass going short, Peppers was able to turn on a dime and make a play on the ball. I love this play, Peppers made a great read and also made a great hit on the ball carrier. To rephrase it, having Peppers over the top allows him to read plays and use his quickens to pursue them.

Jabrill is the king of the offseason

The New York Giants will see a different Jabrill Peppers in 2020. To summarize, Peppers has been killing the offseason, several clips have surfaced of Peppers hitting the weight room and the field. Also, Peppers has been working with the Giants’ fourth-round pick, Darnay Holmes. These two are going to be a nightmare in the secondary, I can’t wait until we get to see them in action. 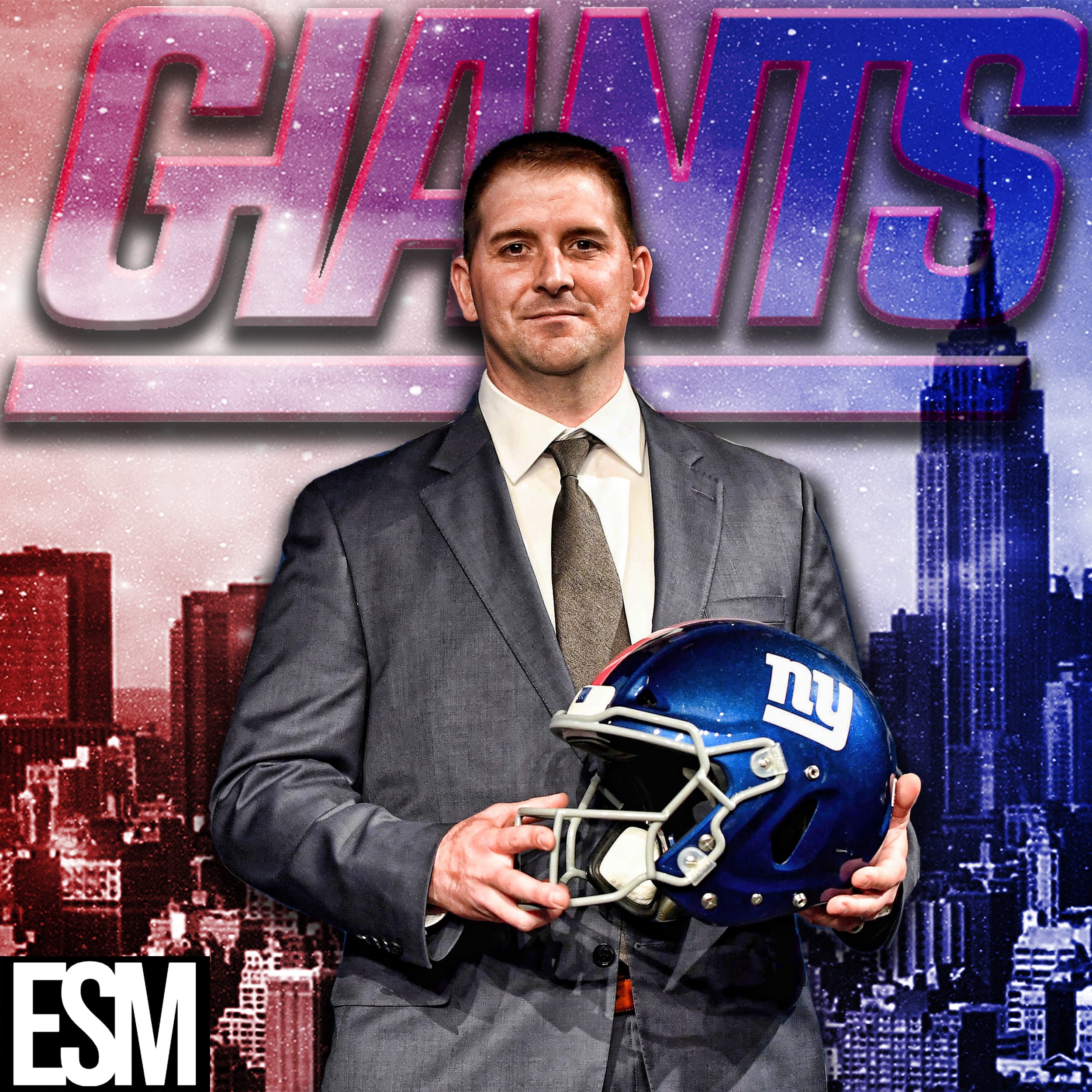 The New York Giants were 25th in total defense in 2019 and general manager Dave Gettleman knew that something had to be done this offseason to address the situation.

Gettleman added depth, flexibility, speed and versatility to the defense this offseason with a flurry of moves before, during and after the draft.

In the draft, they used seven of their ten selections on the defensive side the football: Alabama safety Xavier McKinney; defensive back Darnay Holmes of UCLA; Penn State linebacker Cam Brown; linebacker Carter Coughlin and cornerback Chris Williamson of Minnesota; inside linebacker T.J. Brunson of South Carolina and Georgia linebacker Tae Crowder.

That’s 20 new faces on defense headed for training camp. The Giants are simply throwing ideas and names against the wall to see what sticks. Training camp will sort it all out. Head coach Joe Judge, who is entering his first season on the job, hasn’t even met the veterans on his team yet, never mind the rookies and no one is sure with the COVID-19 restrictions when that is going to happen.

Judge was asked after the draft do you feel with how he felt this team sits right now compared to when he started in January.

“We haven’t been on the field yet so that’s the biggest answer right there. Look, you can’t really evaluate until you get on the grass,” he said. “Right now we have a lot of names on paper. There’s a lot of guys that are itching to get on the grass and compete and start proving themselves. Look, everyone laughs when I say it, but our depth chart is a blank slate right now. We have a lot of names, everyone has to earn every spot they get. So, when we get out there on day one whoever the first five linemen are that are out there, that’s just the first five guys taking a rep. That’s not a spot in concrete at all. They’ve got to earn to keep that spot. We’ll change it up continuously throughout training camp or OTAS, whenever we get these guys. To answer as far as where we are, I think we’ve made some good moves in terms of bringing in pieces that can help us. But overall, I can’t really give you a solid answer just because I can’t comment on specific players until we really get them on the grass, otherwise it’s just speculation and hypotheticals.”

As of right now, the starting lineup could look something like this:

That is without any injuries or surprises in camp. A lot can happen, as Judge said, once the players hit the grass.