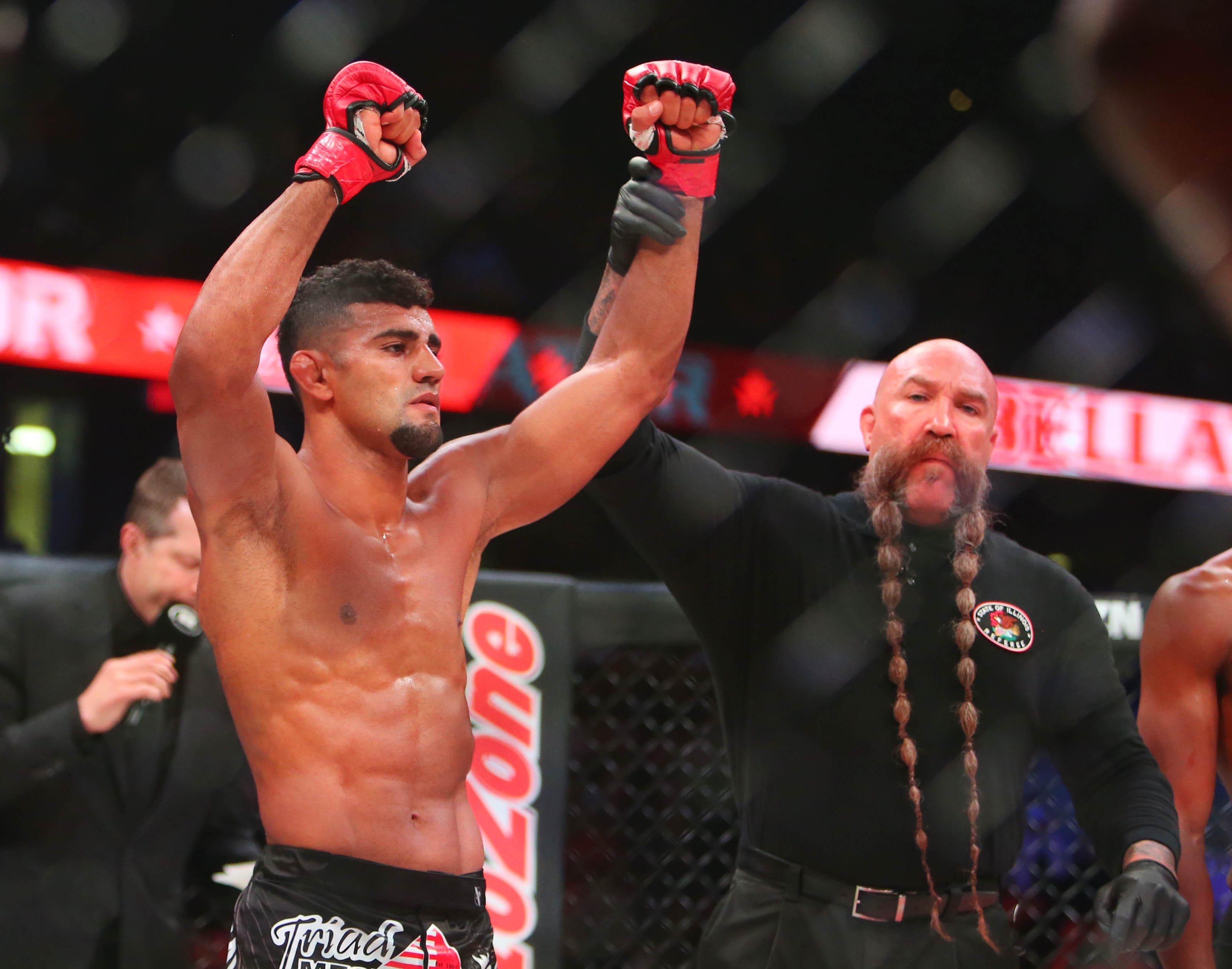 A couple of week’s ago, Bellator welterweight champion, Douglas Lima (32-8), failed in his attempt to become a two-division world champion. Lima fought and was defeated by Gegard Mousasi at Bellator 250.

After the loss, Lima will return to the welterweight division where he holds the crown. There are a number of contenders in the 170 pound division. However, there is not a clear next opponent for Lima at the moment.

In looking at the Bellator welterweight division, there are four fighters who are all coming off victories near the top of the division. The one with the most name recognition would be Michael “Venom” Page (18-1).

MVP has won four fights in a row since being knocked out by Lima. Lima is the only man to get the better of Page inside the cage. However, Page hasn’t fought top competition since the loss which could hurt his chances at getting the next shot.

Another top contender would be Lorenz Larkin (22-7, 1 NC). Larkin has won four in a row including an impressive victory over Andrey Koreshkov back in October of 2019. He has also lost to the current champion back in 2017.

Two other top contenders are grapplers Neiman Gracie (10-1) and Yaroslav Amosov (25-0). Gracie is coming off of an impressive submission win over Jon Fitch while Amosov just edged out Logan Storley last week at Bellator 252.

What’s next for Bellator?

If I’m being completely honest, I’m not sure there is a clear top contender for Bellator at the moment. If I was playing matchmaker, I would lean towards Michael Page to make the biggest fight possible.

However, Lima recently said that Page doesn’t deserve a shot due to the lack of competition. If that was the stance from my champion, I would personally look to book Page against Lorenz Larkin. Larkin has expressed interest in fighting MVP.

That would be my number one contenders match for the next shot at the Bellator crown. I would also pit Gracie against Amosov. Amosov didn’t really impress in his last fight. Despite the perfect record, I don’t think he’s ready for a shot just yet.

The only man to defeat Neiman Gracie was Rory MacDonald. I think if you pit these two grapplers against each other, you could make the argument that either or would deserve a shot if they win.

Bellator definitely has some options, but I would personally book these two fights before giving anyone to the champion. Let Lima take a little time after his loss, and let a true number one contender emerge from this group. 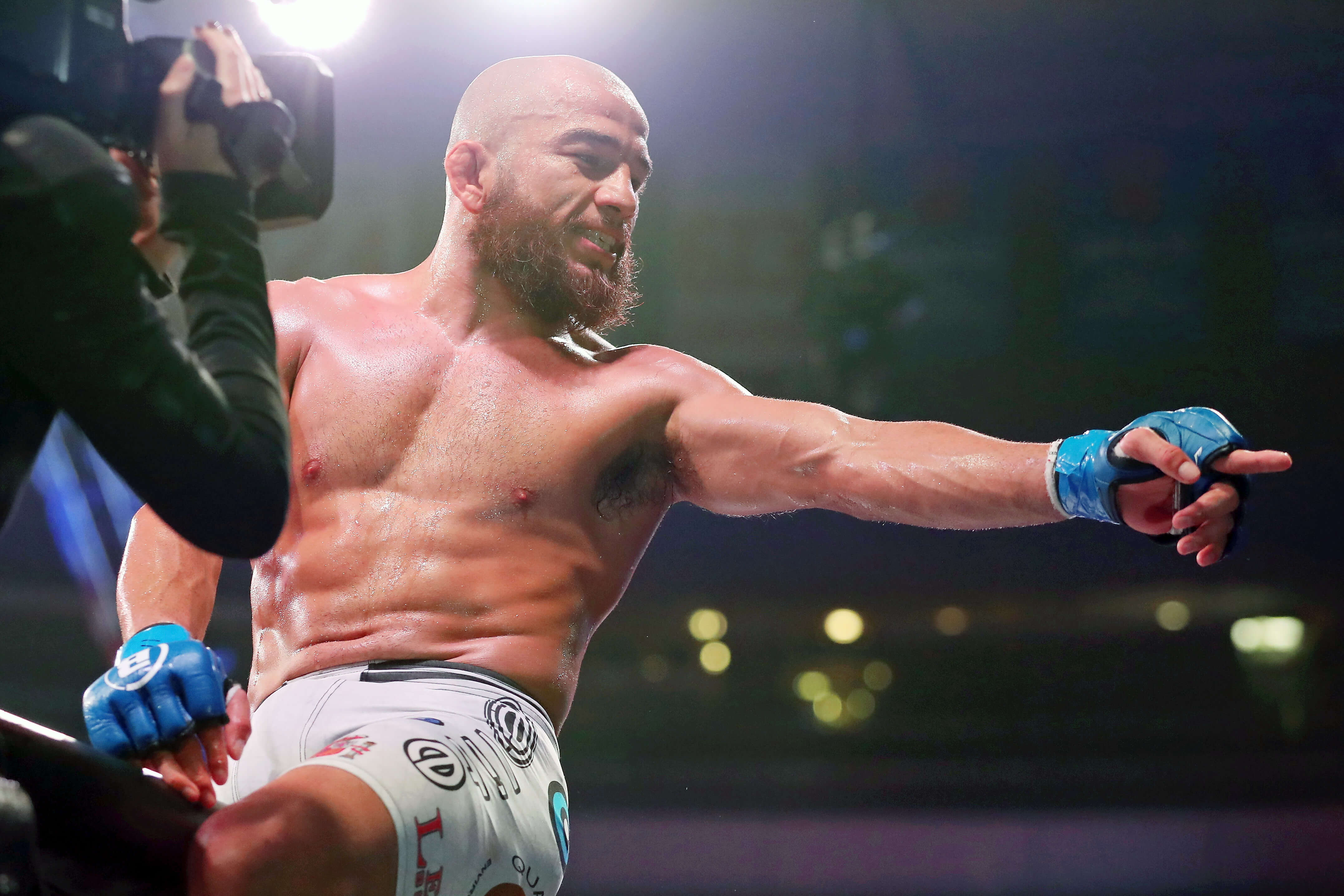 Tonight, Bellator hosted it’s second event in the last two days. A solid night was headlined by the vacant bantamweight title fight between Patrick “Patchy” Mix (13-0) and Juan Archuleta (24-2). This was one of the Bellator fights I was really looking forward to this year.

Both of these men are two of the very best that Bellator has to offer. Mix came in undefeated with extremely slick skills on the ground. Archuleta is a vet who has only lost once since 2015. Both men came in with a ton of momentum looking to become a Bellator champ.

The main event of the evening was set to crown the new Bellator bantamweight champion. Patchy Mix and Juan Archuleta both came out ready to take the title and establish themselves as one of the best bantamweights in the world.

The first round really showed off the elite ground skills of Patchy Mix. Mix was able to get Archuleta down in the first round, and he controlled the majority of the round from Archuleta’s back. The second round saw much of the same.

The two fighters got into a grappling exchange early in the second, and Mix was able to secure the back again. In this round however, Archuleta was able to reverse the position with about one minute left in the round.

Archuleta had some good moments, but I had it 2-0 for Patchy Mix through two. The third round saw a complete switch in the momentum. Mix looked tired to start the third, and Archuleta really put his foot on the gas ripping shots to the head and the body.

Championship Experience pays off for Archuleta

The third round was a clear win for Archuleta. Mix had never been to a fourth round in his career, and it looked like it based on his energy levels to start the round. Archuleta was really stifling Mix with his level changes and speed. Archuleta even landed a takedown in the fourth round.

Patchy Mix did start to find his range late in the fourth, but the round still belonged to Archuleta. Mix did look like he was starting to catch a second wind as the fourth round came to a close. I had it 2-2 going into the final round.

Juan Archuleta put on a show in the final round of the fight. Archuleta unleashed a fury of devastating body shots the really seemed to hurt Mix throughout the round. Mix was game in the fifth, but Archuleta’s experience really paid off in the championship rounds.

I gave the fight 3-2 to Archuleta and all three judges agreed scoring the contest (49-46, 48-47, 48-47). Archuleta captures that Bellator championship that has alluded him. I would not be surprised if these two stood across from each other again in the future.

Bellator 246 saw former UFC title challenger, Liz Carmouche (14-7), make her promotional debut. She took on DeAnna Bennett (10-7-1). Carmouche had to deal with some adversity in the second round of the fight, but she went on to secure a Rear Naked Choke in the third round.

In the co-main event of the evening, Jon Fitch (32-8-2, 1 NC) took on Neiman Gracie (10-1). Fitch had moments in this one, but when you’re on the ground with a Gracie, bad things can happen. Gracie locked up a nice Heel Hook to secure his seventh Bellator submission victory.

Saturday night, Bellator returns with a fantastic card with some tremendous fights. In the main event of the evening, the vacant bantamweight title is on the line as Juan Archuleta (24-2) takes on Patrick Mix (13-0).

These two are two of the very best that Bellator has to offer. The fight should be a fantastic matchup that MMA fans should be excited about. Bellator also has some very solid fights underneath the main event, but all eyes are on the bantamweight title fight.

I’m so pumped for this main event between Archuleta and Mix. They are fighting for the Bellator bantamweight title after the champion, Kyoji Horiguichi (28-3), vacated the title due to injury back in November.

Juan Archuleta started fighting less than ten years ago, yet he already has 26 professional fights. He’s very good on his feet with about half of his wins coming by knockout. However, Archuleta is comfortable wherever the fight goes.

The only man to have defeated Archuleta since 2015 is Bellator‘s current double champion, Patricio Pitbull. Archuleta has dreams of becoming the bantamweight and featherweight Bellator champion, but he fell short in his first crack at the featherweight crown.

Now, he will get his shot against Patrick Mix. There might not be a slicker fighter on the ground on the Bellator roster than 27 year old Patrick Mix. Mix will enter the Bellator cage undefeated at 13-0 and he’s on a eight fight finish streak.

Nine of Mix’s 13 wins have come via submission. His last four fights have all ended in the first round which included the first TKO of his career. Mix is a well rounded fighter, but there’s no question in where he wants this fight to go.

The fight is going to come down to where it takes place. While Mix can hold his own on the feet, if it stays standing, Archuleta has an advantage. The moment it touches the ground, Mix has a big advantage.

While I see a back and forth contest and I wouldn’t be shocked by either winning, I think Mix is going to pull off a submission in this one.

The Rest of Bellator 246

The rest of the card is stacked with some very good fights. Jon Fitch (32-7) takes on Neiman Gracie (9-1) in the co-main event of the evening. Former two time UFC title challenger Liz Carmouche is making her Bellator debut tomorrow night.

I’m also interested in watching the undefeated Keoni Diggs (8-0) who’s taking on Derek Campos (20-10). Bellator has a very strong week this week with two cards, and this is an excellent way of finish things off.