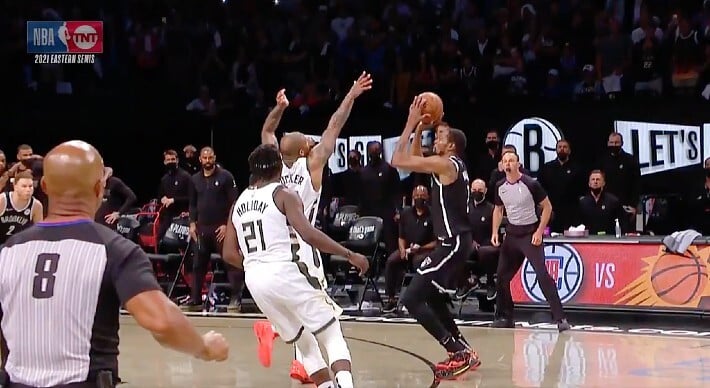 The NBA Playoffs’ most talked about sliding door moment never entered Kevin Durant’s mind when he watched Giannis Antetokounmpo and the Milwaukee Bucks hoisting the Larry O’Brien trophy from his room in Tokyo, Japan.

Durant and his Brooklyn Nets were reduced to being a footnote of the Bucks’ title run this season.

Kyrie Irving sprained his ankle. James Harden played hurt. Durant came a couple of inches away from eliminating the Bucks. But alas, the basketball gods smiled on the Greek Freak.

“I’m not really [thinking about what could have been],” Durant said on Wednesday after Team USA practice. “You don’t play for moral victories. You only want to be the last team standing in the NBA Finals. We understand how good we are and not just go push the Bucks [to seven games].”

“Our goal is to win it. Unfortunately, we didn’t. Congrats to the Bucks, an amazing team who fought through a lot the last two years to get to this point. I have a lot of respect for them.”

The super team in Brooklyn, which was supposed to steamroll its way to the Nets’ first NBA championship, could not be healthy enough to stay together on the floor.

Meanwhile, Antetokounmpo bucked a hyperextended knee in the playoffs and capped off his dominant NBA Finals run with a 50-piece and five blocks.

Seven years ago, Antetokounmpo promised he would not leave the city without winning a championship. He followed through by signing the supermax extension. The Bucks’ front office repaid his loyalty with boom-or-bust moves, including the botched trade for Bogdan Bognadovic that cost them a second-round pick. The Jrue Holiday trade paled in comparison to the Nets’ all-in move to acquire Harden. But they beat the Nets to the draw in trading for Harden’s former Houston Rockets teammate PJ Tucker.

Durant was never asked to react to Antetokounmpo’s postgame remark. But he came away impressed with how the Bucks build their championship team.

“It was good to see Milwaukee forming some sort of a dynasty with that team,” Durant said. “I know it’s the first championship. I know a lot of people will call you a dynasty after a few [titles]. The continuity of that team is something that is impressive. How they continue to keep building and adding and now they’re a champion. So you can appreciate that.”

The Bucks are guaranteed to have Antetokounmpo, Khris Middleton, Holiday, and Brook Lopez together until the 2022-23 season. Durant will have another shot at the Bucks next season, provided Brooklyn’s Big 3 will be healthy.

But in a couple of days, he will have to set aside the rivalry and join forces with Middleton and Holiday at Team USA and welcome Phoenix Suns’ rising star Devin Booker, who could still be reeling from that stinging loss, squandering a 2-0 lead, to the squad.

“We got respect for these guys. That experience doesn’t happen to just anybody. You respect those guys that went through that journey,” Durant said.

“You see a young team like Phoenix, who everybody has been counting out in the last five to six years. And now they made themselves into a contender and hopefully become a contender moving forward in the West,” he added.

Durant has been both on the opposite side of the spectrum. Before becoming a multiple NBA champion with the Warriors, Durant, like Booker, lost a young team in Oklahoma City. So he knows the feeling.

But they need Booker to recover quickly. They need Middleton and Holiday to chill down from the euphoria of winning their first championship. They have a mission in Tokyo. A goal that looked vulnerable at the onset with the missing players due to COVID-19 issues and different circumstances.

“I think there will definitely be adjustments just with the quick turnaround. But those guys know what they’re getting into themselves when they made the commitment a few weeks back,” Durant said. “They had an understanding of what this journey is and they have an extra couple of weeks added on to their postseason now. We’re looking forward to those guys coming in and we understand that it will take a while for them to take their legs back under them, calm down from all the hype of the NBA Finals but we can’t wait to incorporate them.”

Durant has already moved on from a lost NBA season. His eyes are set on a different prize. 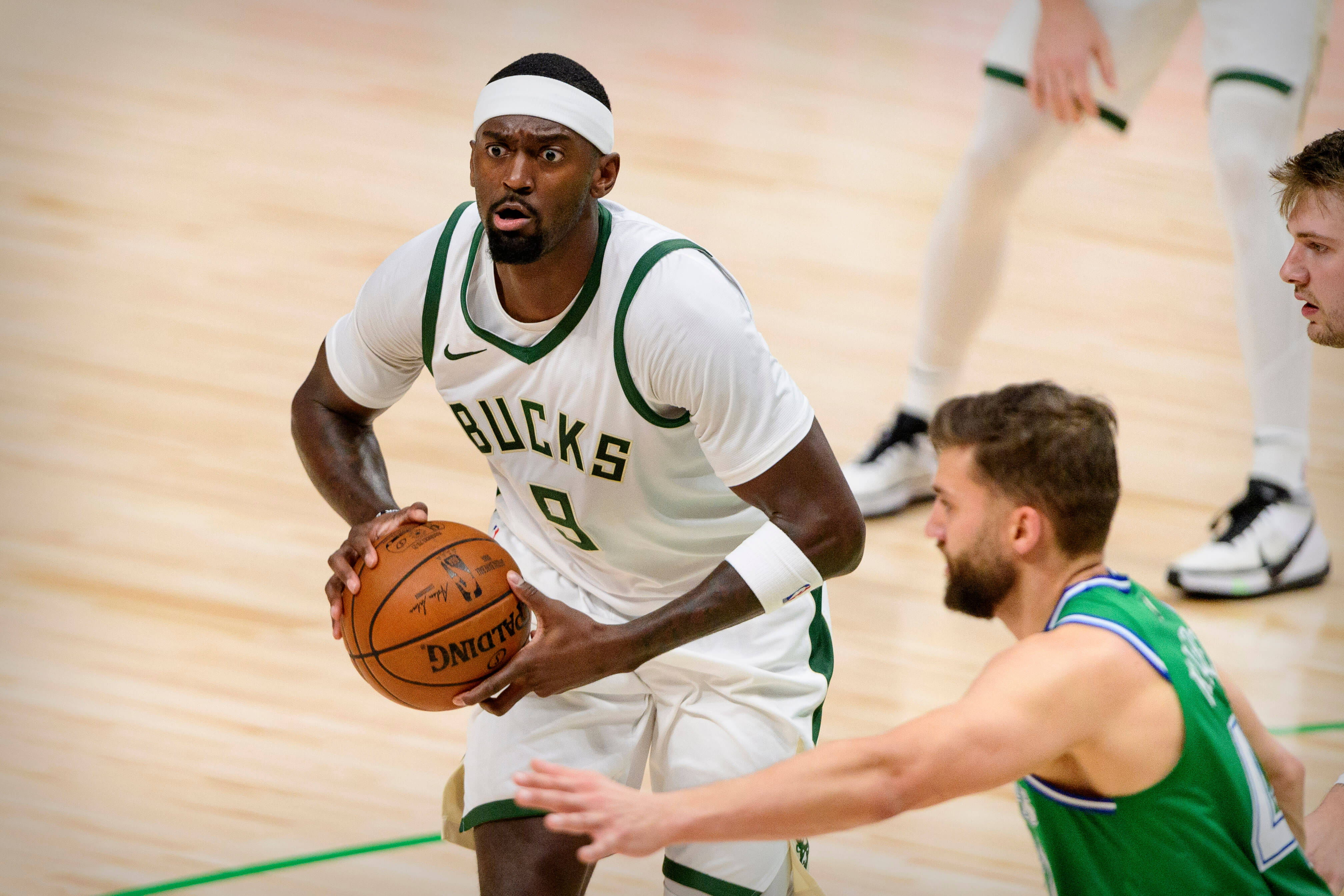 Ex-New York Knicks forward Bobby Portis is in his first NBA Finals, and that feeling had only sunk in when the Milwaukee Bucks arrived in Phoenix for the first two games of the series.

“I think yesterday is when it finally hit me,” Portis said following their Tuesday morning shootaround. “After the game on Saturday, I was just so pumped up and so thrilled still that we got the victory and that the series is over, and that we’re moving on to the Finals, I didn’t get a chance to just decompress and just sit down and just think about it. When I got on the plane yesterday and got to the hotel room and I was actually by myself for a change, that’s when it hit me. Yeah, like we’re the Finals now, and it was a big accomplishment.”

“It’s a first for me — first time in the playoffs in four years too — so being able to get a chance to go about each round and compete in every series and get to this point with this amazing group of guys is great.

After the Knicks did not pick up his $15.75-milllion team option last year, Portis took a significant discount for a chance to have a deep run in the playoffs. He signed a two-year, $7.5 million deal to join the Bucks, saying he resisted larger offers from other teams.

That decision paid him huge dividends on the court.

In the last two Milwaukee wins to wrap up the series against Atlanta Hawks, Portis had a pair of big games starting with a playoff career-high 22 points, eight rebounds, three assists, and three steals in Game 5. He almost had a double-double in the series-clinching Game 6 win (12 points, 9 rebounds).

After his epic Game 5 performance, Portis revealed that the turning point for him was when his one-year stint with the Knicks hit rock bottom.

“The pandemic really drove me to find out about myself,” Portis said.

Portis averaged 10.1 points and 5.1 rebounds as one of the ‘too many power forwards’ on a poorly constructed Knicks roster that ended up winning only 21 games.

He said he was hurt not being in the playoffs, watching the Orlando Bubble on TV at home. But he used that as a motivation. He spent the next nine months with his mother while he worked on his game with his eyes set on playing for a contender.

“I finally found peace, man,” Portis said after the Bucks led 3-2 in the series. “I’m at peace with myself and at peace in my life and at peace with everything going on around. I was just always trying to find it again, and really couldn’t find it. But having great teammates and great coaches. And the pandemic, like I said, really helped me find out more about myself more than anything.”

That prepared Portis for the highs and lows of this COVID-19 condensed season. From having DNP in the final three games against the Brooklyn Nets in the second round to emerge as the Bucks’ X-Factor in the Eastern Conference Finals, Portis stayed locked-in for this chance.

“This moment is special,” Portis said on Tuesday. “Growing up as a kid watching KG [Kevin Garnett] versus Kobe in the Finals, LeBron all those years and things like that, so being able to be a kid from Little Rock, Arkansas, being able to represent myself, my team, this organization, my family, and my state on the biggest stage in basketball is remarkable, man! All the hard work I put in, being able to be in the NBA Finals is a dream come true, and it’s a special moment.”

Portis won’t hear chants of “Bobby! Bobby!” as he had in Milwaukee with the first two games on the road. His starting gig isn’t even guaranteed with Antetokounmpo a game-time decision. But those are the least of his worries.

Portis is ready to bring his high-octane energy that fueled the Bucks, whether he was coming off the bench or starting in place of their franchise player.

“Just stay together knowing that every possession matters, being together, staying in the moment, just trying to burn the motor out. Ain’t no tomorrow. We’ve got seven games to win four, and I’m just trying to blow the motor out and go as hard as I can and get them all,” said Portis of his mindset heading into the Finals.

If he returns to the bench, Portis believes he can still impact the game. As superstars usually cancel out each other on the big stage, role players like him on the bench will be critical.

“[The Suns] do a good job on their end too with Cameron Payne and Saric and those guys. Cam Johnson, as well, coming off the bench and scoring the basketball and bringing some energy to the game.”

Portis’ swing skill isn’t just his shooting that can stretch the floor or his rebounding. It’s his ball of energy that can shift the momentum to the Bucks’ side.