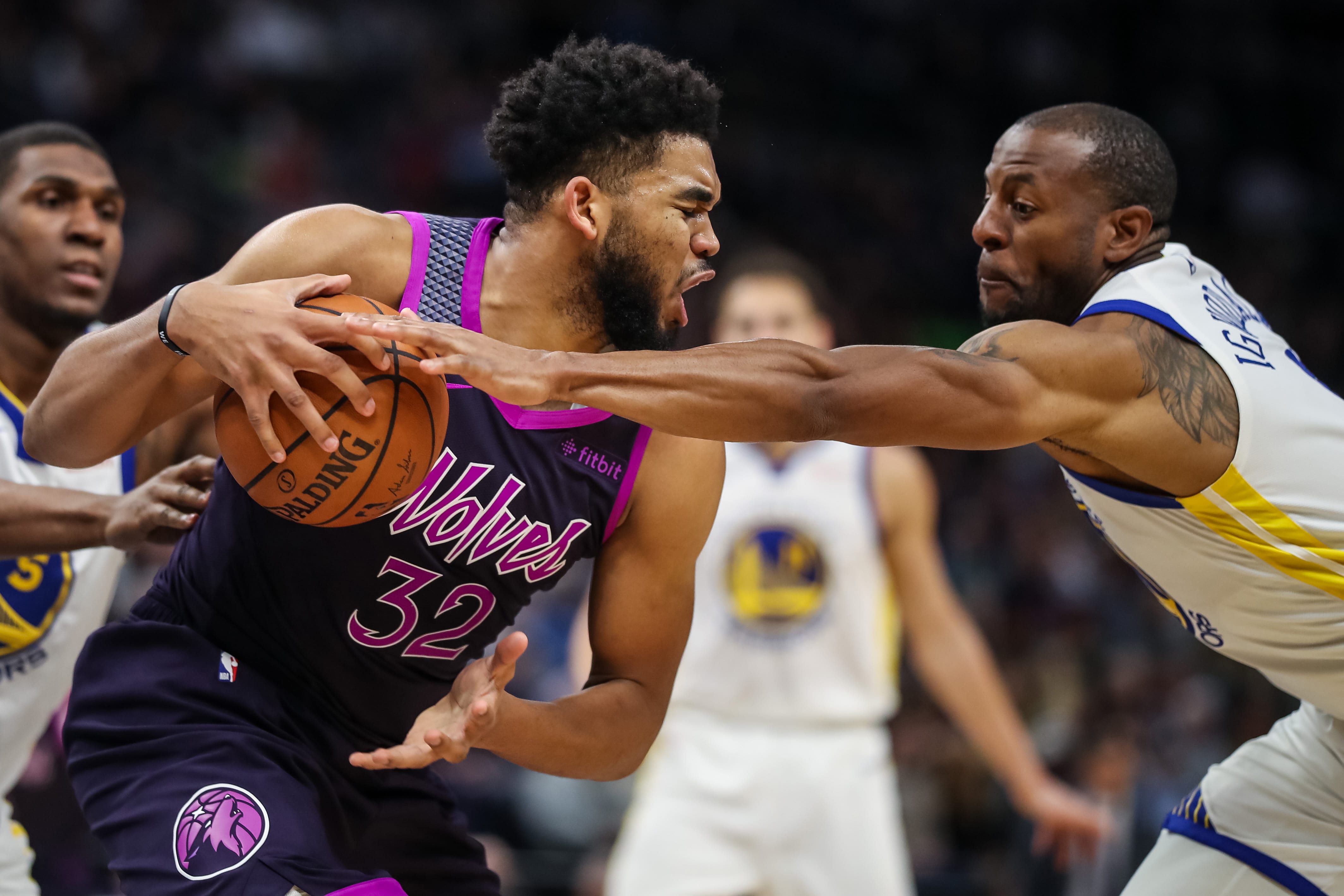 The New York Knicks might have signed numerous quality veteran free agents this off-season, but they’re far away from being an NBA Finals contending team. Missing out on superstars like Kevin Durant and Kyrie Irving hurt their chances of competing this season for a playoff spot, but there are opportunities for potential trades out there.

One big name that could be on the Knicks’ radar this season is Minnesota Timberwolves center, Karl-Anthony Towns. The fifth-year player is one of the leagues more dominant options and recently signed a five-year, $190 million extension.

The Timberwolves haven’t given Towns much support to allow him to thrive, but signing him to a massive extension gave them a sigh of relief after trading Jimmy Butler to the Philadelphia 76ers. Minnesota likely isn’t hitting the panic button, but they could gain some valuable assets from the Knicks if they’re willing to play ball on a potential deal.

What would make Karl-Anthony Towns attractive for the New York Knicks?

One of the more appealing aspects of Towns is his ability to stay healthy and play maximum minutes. Over four years, he has averaged 34.4 minutes per game on 22.3 points. His rebounding totals are astronomical as well, averaging a total 12.4 rebounds per game.

He has also added a three-point shot to his arsenal, averaging 4.6 attempts and hitting on 1.8 per game. While that number is nothing to write home about, it is one attribute of his game that is important and can be developed further moving forward.

Pairing Karl-Anthony with Mitchell Robinson would make the Knicks one of the best defensive squads in the league immediately and playing two big men while featuring several quality shooters could be a recipe for success. This is all just a hypothetical situation after all, but an exciting and intriguing one, nonetheless.

New York has plenty of draft capital to use if the two teams theoretically engaged in talks. The Knicks own four first-round picks over the next three years, two of which come in 2021. I imagine they would likely have to give up two first-round picks for a player like Towns, but it would be well worth it considering his young age and dominance across-the-board. 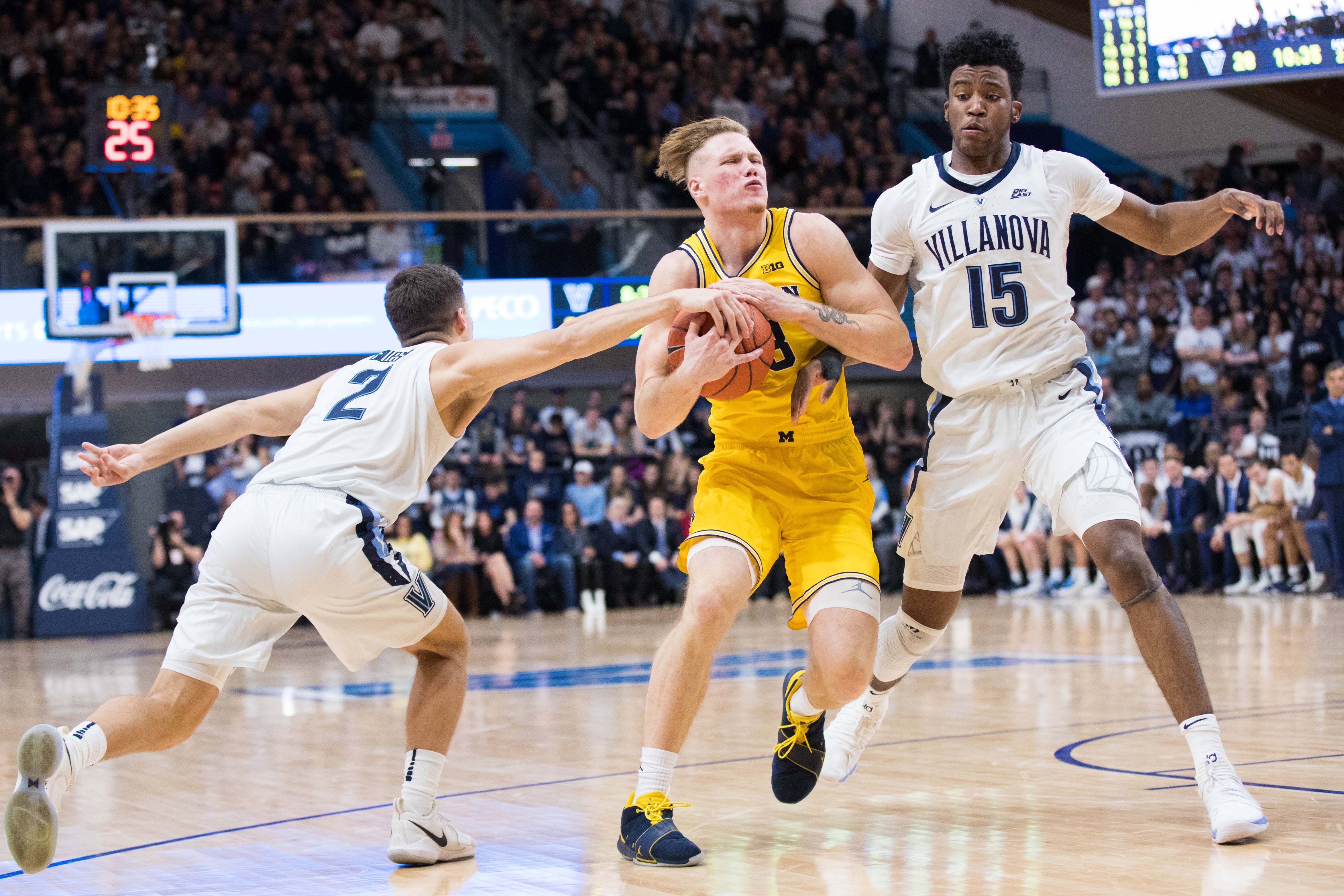 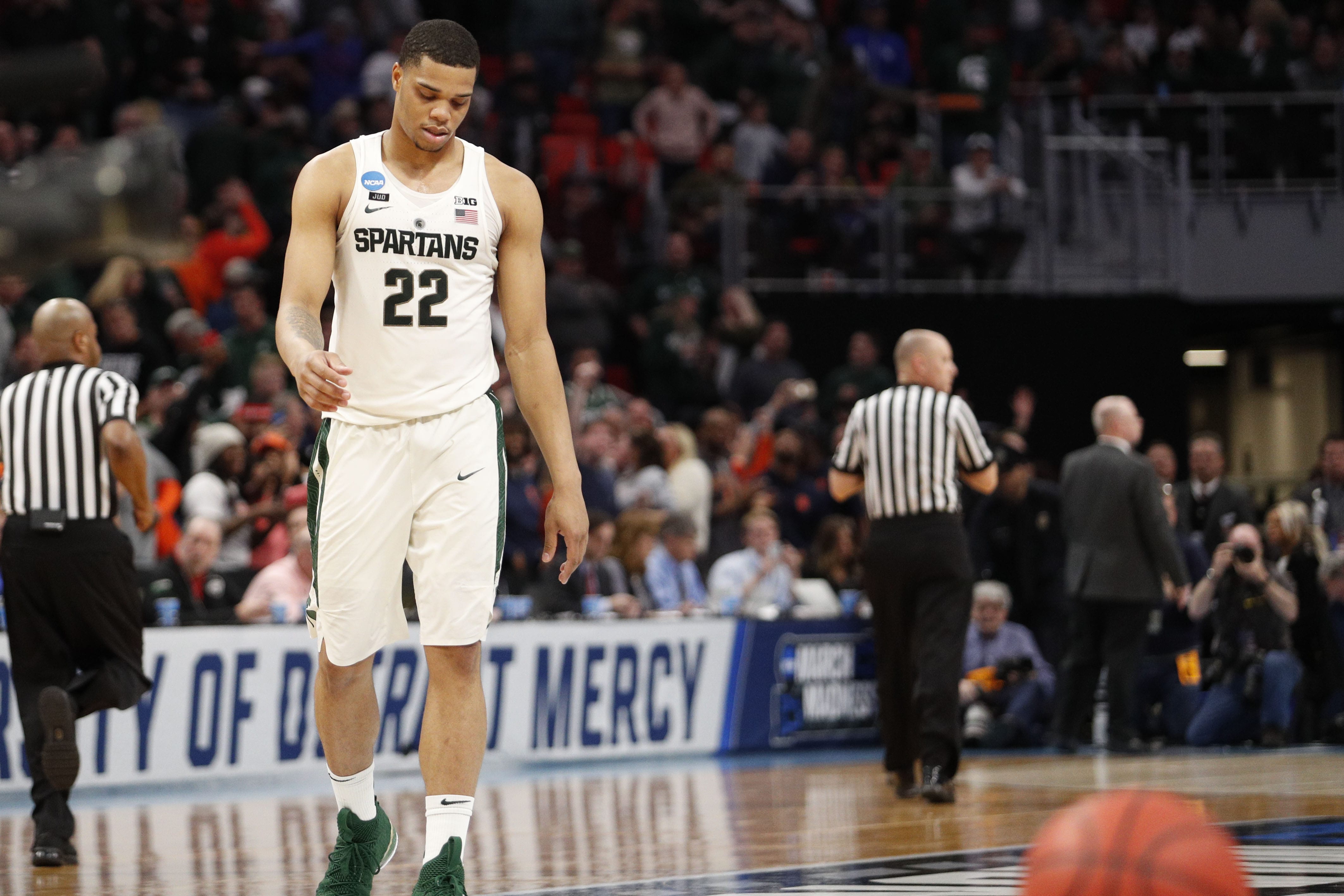 Illinois pulled off a crazy upset over Michigan St. this week, and Iowa’s Jordan Bohannon hit a crazy buzzer-beater in a win over Northwestern to lead the story-lines of the week. Let’s get into the games!

Ignas Brazdeikis led Michigan with 23 points as the Wolverines were able to pick up a road win at Rutgers. Jon Teske and Jordan Poole combined for 22 points but shot a poor 8-for-23 together. Eugene Omoruyi had 21 points and Montez Mathis had 12 points for Rutgers.

Illinois pulled the upset of the week with a big home win over Michigan State. Ayo Dosunmu had 24 points, Giorgi Bezhanishvilli had 16, and Trent Frazier had 15 for the winners. Cassius Winston had another big night for Michigan St., finishing with 21 points and nine assists.

Ethan Happ had a 15 point, 13 rebound double-double to lead Wisconsin to a road victory over Minnesota. Brad Davidson added 10 points, and Nate Reuvers had nine rebounds and seven blocks for Wisconsin. Jordan Murphy had a huge 16 point, 19 rebound performance for the losers.

Jalen Smith and Bruno Fernando both had double-doubles to power Maryland past Nebraska. Maryland shot the ball 38 percent, but held Nebraska to an extremely poor 21 percent, including 0-for-10 shooting from Glynn Watson Jr. for Nebraska. Isaiah Roby 20 points and 1 rebounds to lead the Cornhuskers.

Jordan Bohannon and Tyler Cook combined for 46 points for Iowa in their win over Indiana. Iowa made 10 threes and 13 free-throws on the night. Romeo Langford had 22 points and five rebounds for Indiana, and Juwan Morgan added 17.

Ohio State’s 50 percent shooting helped power them to a win over the feisty Penn State Nittany Lions. Luther Muhammad had 20 points, and Andre Wesson had 15 points and 10 boards for the Buckeyes. Lamar Stevens and Josh Reaves each had 20 for Penn State,.

Michigan State finally broke out of their three game losing streak with a blowout win over the sliding Minnesota Golden Gophers. nick Ward had 22 points and nine rebounds and Cassius Winston had 11 points and nine assists. Matt McQuaid added 18 points, and eight more assists, as Michigan State thrives off the catch-and-shoot. Gabe Kalscheur had 17 points for Minnesota.

Carsen Edwards dropped 27 points as Purdue blew out Nebraska at home. Grady Eifert had 16 points, and Nojel Eastern had 12 points and 10 rebounds. Thomas Allen led Nebraska with 18 points off the bench, and Nebraska shot just 38 percent on the night.

Giorgi Bezhanishvilli exploded for 35 points, as Illinois took down Rutgers at home in overtime. Four total players would reach double figures for Illinois, who shot the ball 50 percent. Caleb McConnell had a big night for Rutgers with 25 points and nine rebounds off the bench.

Iowa was down 15 points with 4:30 left, but Iowa fought back and won the game thanks to a Jordan Bohannon buzzer-beater. He had 15 points, but Joe Wieskamp led with 21 points while Tyler cook had 19 points and 11 rebounds. Vic Law led Northwestern with 24 points and 10 boards.

Indiana couldn’t convert in the final seconds to send the game into overtime, as Ohio State snuck away from Bloomington with a 55-52 win. The Wesson brothers combined for 25 of Ohio State’s 55 points, as the team shot 44 percent. Romeo Langford had 15 points for Indiana, while Juwan Morgan was held in-check with just three points, but still managed to haul-in 14 boards. 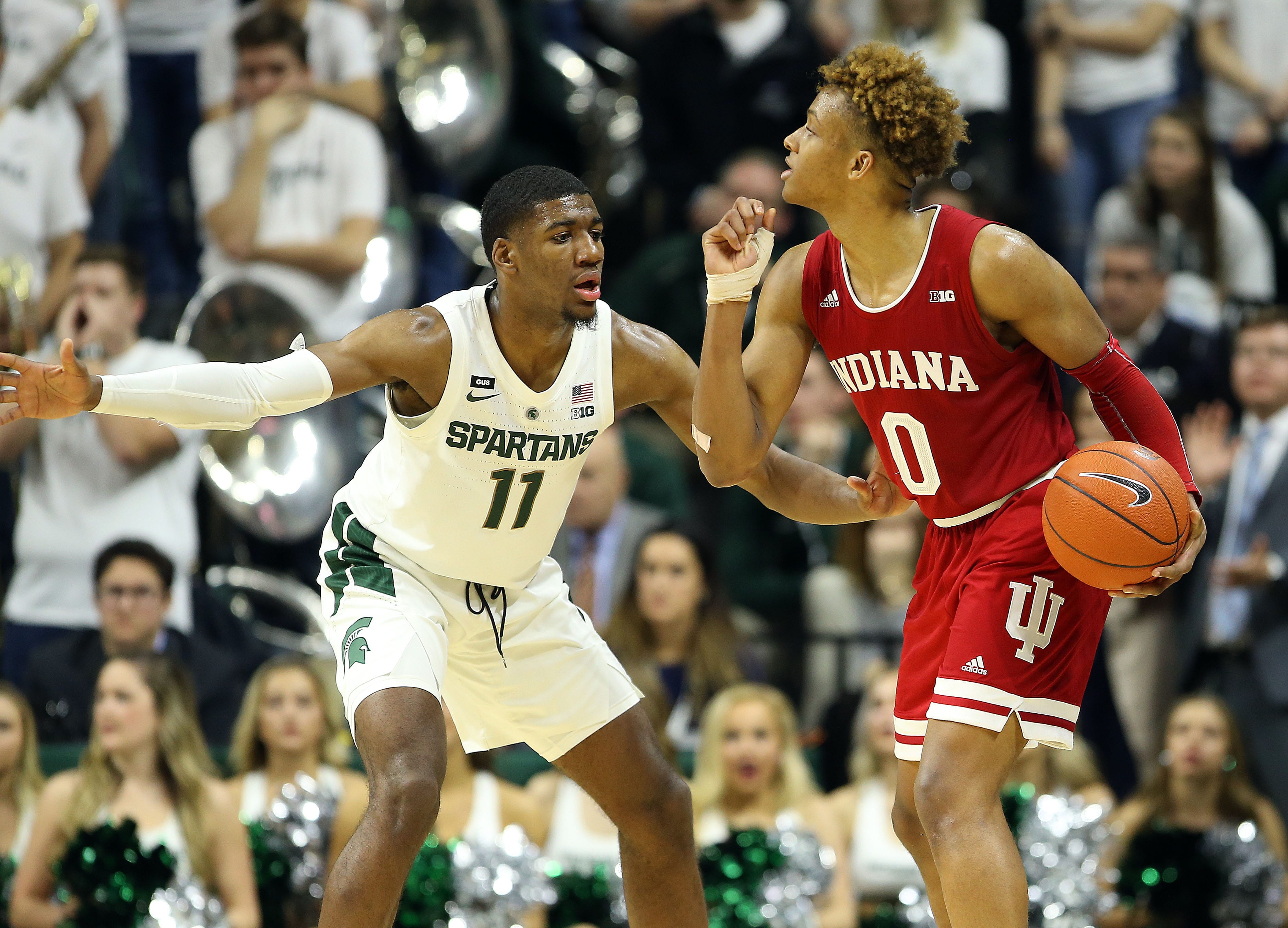 Another fun week of Big Ten hoops is led by Iowa dominating Michigan, Indiana upsetting Michigan St., and Wisconsin with two big wins. Six teams hit the Top 25 this week! There were 12 games, so let’s dive into it!

Wisconsin held Nebraska to just 28 percent from the field to beat Nebraska, despite being out-rebounded. Three Wisconsin Badgers were in double figures, including Ethan Happ who also had nine rebounds. Isaiah Roby had 18 points and nine rebounds to lead Nebraska.

Rutgers strong effort on the boards helped them beat the struggling Indiana Hoosiers. Three Scarlet Knights were in double-figures, and they held Indiana to just 35 percent shooting. Romeo Langford led Indiana with 20 points and six rebounds in the loss.

Iowa jumped out to a 13 point halftime lead on their home floor and used that to knock off the number five team in the country. Luke Garza and Joe Wieskamp had 19 and 16 points, respectively for the winners. Iowa held Michigan to just 32 percent from the field. Three Wolverines made it into double-figures.

Wisconsin used a dominating second half after trailing at halftime to beat Maryland at home. Brad Davidson had 21 points for Wisconsin, and Ethan Happ had an 18 point, 11 rebound double-double as well. Bruno Fernando had a double-double to lead the Terrapins.

Despite losing Juwan Morgan in the first half to a shoulder injury, Indiana ended their skid with a huge road upset over Michigan St. Romeo Langford led the winners with 19 points, and Justin Smith had 13 points and 10 rebounds with the game-sealing block. Cassius Winston had a huge night for the Spartans with 26 points, eight rebounds, and eight assists.

Ohio State shot the ball 53 percent to lead to a victory over Rutgers. Kaleb Wesson had 27 points and five assists, and C.J. Jackson had 20 points and seven rebounds. Despite the win, they trailed -11 in the rebound margin.  Eugene Omoruyi had 19 points, eight rebounds, and six rebounds for Rutgers in the loss.

Illinois balanced scoring and strong defense led them to a win over Nebraska. Kipper Nichols had 18 points off the bench, while Illinois held Nebraska to just 36 percent from the field. James Palmer Jr. had 22 points and eight rebounds for Nebraska, and Tanner Borchardt had 12 points and 18 rebounds.

Purdue had five players in double-figures and shot the ball 48 percent in a win over Minnesota. Carsen Edwards led Purdue with 17 points, five rebounds, and five assists, and Nojel Eastern had 11 points, six rebounds, four assists, and two steals in an all-around effort. Amir Coffey had 22 points for Minnesota, and Daniel Oturu had 19 points and nine rebounds off of the bench.