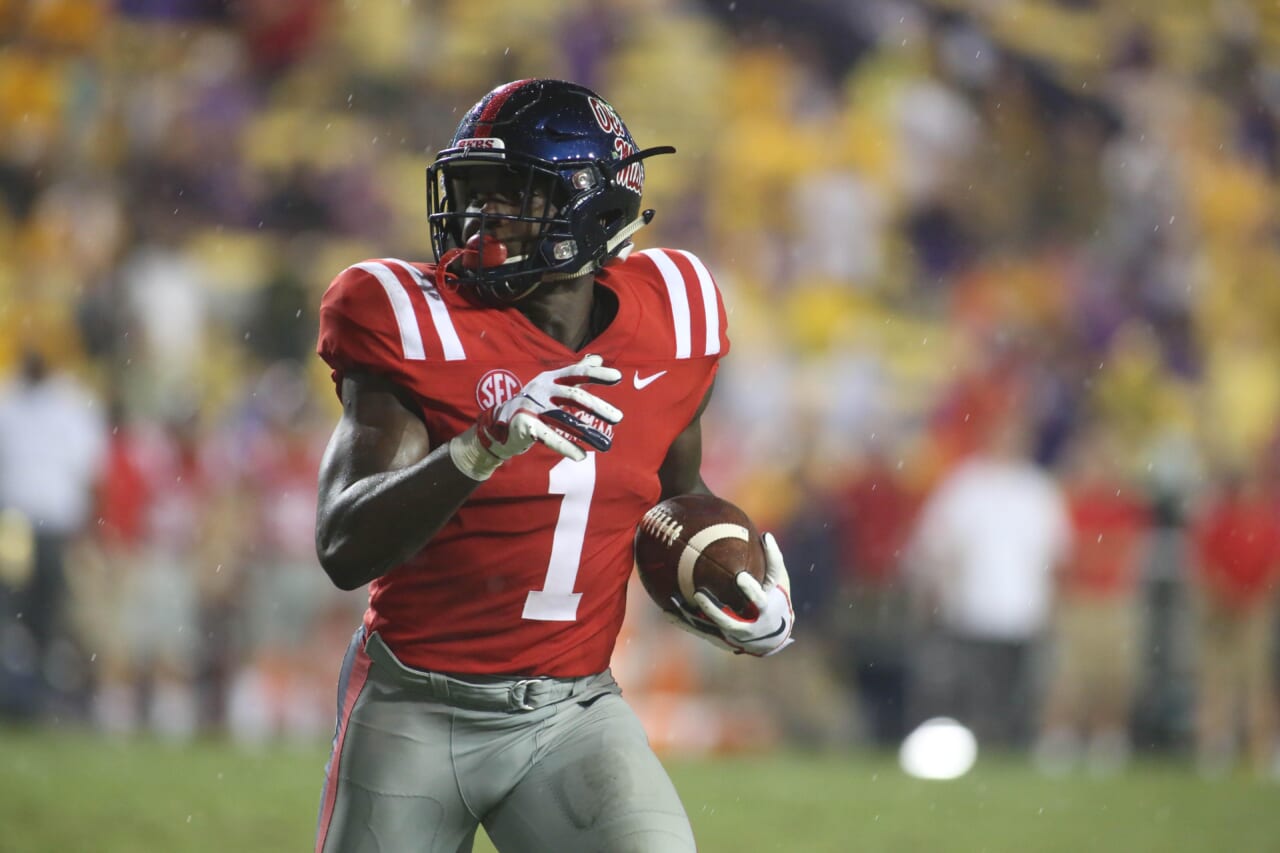 On Tuesday night, the New York Giants shocked the NFL world. They traded superstar wide receiver Odell Beckham Jr. to the Cleveland Browns. This opened up another huge hole on the Giants’ roster.

The Giants received the 17th overall pick in the Beckham Jr. trade. Much speculation has been made around what the Giants plan to do with that pick. Now that the Giants do not have a true number one receiver on the team, they could consider drafting a wide receiver at 17.

Ole Miss wide receiver D.K. Metcalf became a superstar at the 2019 NFL Combine. Metcalf is a huge receiver, standing tall at 6 feet 3 inches and weighing in at 228 pounds. D.K. became a social media sensation with posted images of his shredded body. Since then, he has been on the rise as a prospect.

Metcalf has likely sky-rocketed his draft stock into the top 10. However, he has been projected all over the place. Some analysts have mocked him in the top 10, some outside of the top 20.

Despite his big frame, Metcalf is a speedy receiver. He ran an incredible 4.33 40-yard dash. His incredible Combine did not stop there, however. Metcalf also posted 27 bench press reps and measured a 40.5-inch vertical jump. It will be tough for NFL teams to matchup against an athletic freak like D.K. Metcalf.

D.K. Metcalf is not just impressive during workouts. He has shown tremendous talent on the field, too. Metcalf only played in 7 games in 2018 due to injury, but he was very productive when he was on the field. In 2018, D.K. Metcalf caught 26 passes with 5 touchdowns and 569 yards. His 21.9 yards per catch average is especially impressive.

DK Metcalf with the big catch and run for the touchdown. pic.twitter.com/l0IzXLpHgF

D.K. Metcalf is not the only great receiver coming out of Ole Miss this year. His teammate, A.J. Brown was Ole Miss’s true number one receiver in 2018. Brown played only one season of football in college (2018), but it was impressive enough to prove that he is ready for the NFL.

A.J. Brown caught 85 passes for 1,320 yards in 2018. He also added 6 touchdowns. Brown was not as much of a deep-threat as Metcalf was, but he could do it all. He still managed to have a 15.5 yards per reception average and Brown is an excellent route-runner. Brown stands at about 6 feet 1 inch and 225 pounds. This is a great size for a receiver prospect.

Brown posted a 4.49 40-yard dash at the Combine. Not blazing speed, but definitely good enough to compete in the NFL. A.J. also showed strength and explosiveness with 19 bench press reps, a 36.5 vertical jump, and 120-inch broad jump.

A.J. Brown is not simply a possession receiver either. He has shown the ability to make plays after the catch. Check out this 84-yard catch and run:

Hereâ€™s that AJ Brown touchdown from earlier. Breaking a tackle and taking a hitch 84 yards is a good way to get around trying to score in the red zone if youâ€™re #OleMiss pic.twitter.com/k4DZ89467L

Here is a clip of Brown making a one-handed catch at the Combine, thrown by Dwayne Haskins. Could this connection come to Big Blue in 2019? Since the Giants now hold the 6th and the 17th overall picks, it is a real possibility.

All this hype about DK, youâ€™re forgetting about AJ Brown ðŸ”¥ WR1
pic.twitter.com/VbND0xE3Mz

Oklahoma has produced some of the best prospects in recent years. Last year’s number one overall pick, Baker Mayfield to name one. This year’s top quarterback prospect Kyler Murray to name a second. Kyler Murray’s favorite target, Marquise Brown, to name a third.

Marquise Brown is a speedy receiver out of Oklahoma who has the potential to be the next Tyreek Hill or Desean Jackson. In 2018, Brown caught 75 passes for 1,318 yards and 10 touchdowns. Brown did not run the 40-yard dash at the Combine, but he has been praised by NFL Network analyst Daniel Jeremiah for being the “fastest player in the draft” on multiple occasions.

Football talent runs through Marquise’s blood. He is the cousin of top NFL receiver Antonio Brown. However, Marquise and Antonio have different playstyles. Antonio is a possession receiver, but Marquise is a deep threat.

Marquise Brown also has the ability to turn a short reception into a long touchdown. This play should remind fans of Odell Beckham and his ability to take a slant to the house: