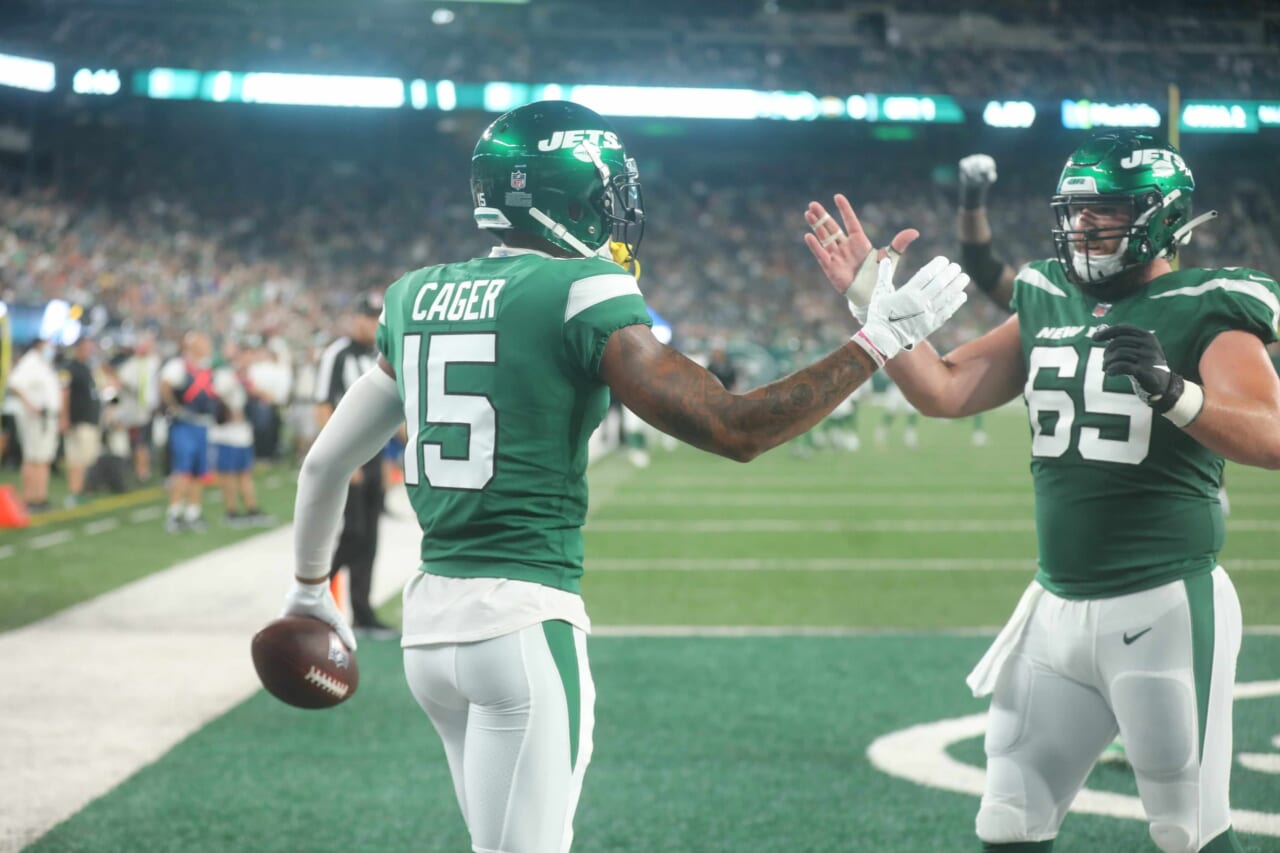 The New York Jets signed Lawrence Cager as an undrafted free agent in 2020. He was a big and tall wide receiver prospect out of Georgia, coming off a career year in 2019. Cager was an intriguing rookie free agent with his 6-foot-5, 220-pound frame. Now, he has made the move from wide receiver to tight end and has supposedly done a solid job in OTAs to this point.

During his first four years of college, from 2015-18, Cager was at the University of Miami. He then transferred to the University of Georgia in 2019, where he posted career-highs in catches with 33 and receiving yards with 476 in only eight games played. Of his 78 catches in college, 14 went for touchdowns, nearly 20%. He also caught 14 touchdowns over 33 total games played, almost one every two games.

Cager then went on to sign with the Jets as an undrafted free agent. He spent his entire rookie year in 2020 with the team, bouncing back and forth between the active roster and practice squad. Cager spent 2021 with the Jets up until the end of training camp, when he was waived. He then signed with the Cleveland Browns, where he was on both the active roster and practice squad throughout the season.

Shortly after the 2021 regular season, Cager signed back with the Jets on a reserve/future contract. When he signed in January, it was announced he would be making the move from wide receiver to tight end.

Considering his size, it makes sense why the position change would take place for Cager. He reportedly got bigger this offseason with his weight and muscle as he plays a more physical position. To this point, Cager has shown some promise at OTAs. Connor Hughes of The Athletic spoke highly of Cager on The Can’t Wait show. He stated that he has consistently made plays in the passing game each day. Hughes spoke on the fact that he is a tough matchup for linebackers and safeties with his receiver background.

Cager is still a young player who will turn 25 in August. If he continues to show growth at tight end, it will be interesting to see if Cager can compete to make the final roster as the fourth tight end.

The depleted New York Jets promoted two players from their practice squad prior to their Sunday showdown with the Colts.

Decimated by injuries, the New York Jets added two players from their practice squad as they prepare to battle the Indianapolis Colts on the road this Sunday (4:05 p.m. ET, CBS). Receiver Lawrence Cager and offensive lineman Jimmy Murray will each join the active roster, the team confirmed on Saturday night.

Cager, 23, earned positive reviews during his training camp stretch with the Jets over the summer. He joined the team as an undrafted free agent out of Georgia. Cager had transferred to the Bulldogs after three seasons with Miami. Overall, he earned 1,157 yards on 78 receptions, 14 good for touchdowns, in his time in Athens and Coral Gables. Injuries limited him to only one full season, his junior campaign of 2018 when he scored a career-best six scores.

The Jets (0-2) are very much depleted on the receiving front. Second-round rookie Denzel Mims is on injured reserve while veterans Breshad Perriman and Jamison Crowder have already been ruled out due to injuries. Chris Hogan and Braxton Berrios are expected to be the top options for quarterback Sam Darnold at Lucas Oil Stadium.

Meanwhile, Murray joins the team’s active roster for the first time since joining up with the practice squad in November. He was waived at the end of the summer’s training camp activities but was signed back to the squad the next day. An alum of Holy Cross (where he earned second-team All-Patriot League nominations in 2016 and 2017), the 25-year-old blocker has partaken in two regular season NFL games, each with the Kansas City Chiefs in 2018.

Murray’s name was called during the offensive lineman portion of last fall’s XFL Draft. He was chosen in the eighth round by the St. Louis BattleHawks but opted not to sign with the team and remained with the Jets’ practice squad.