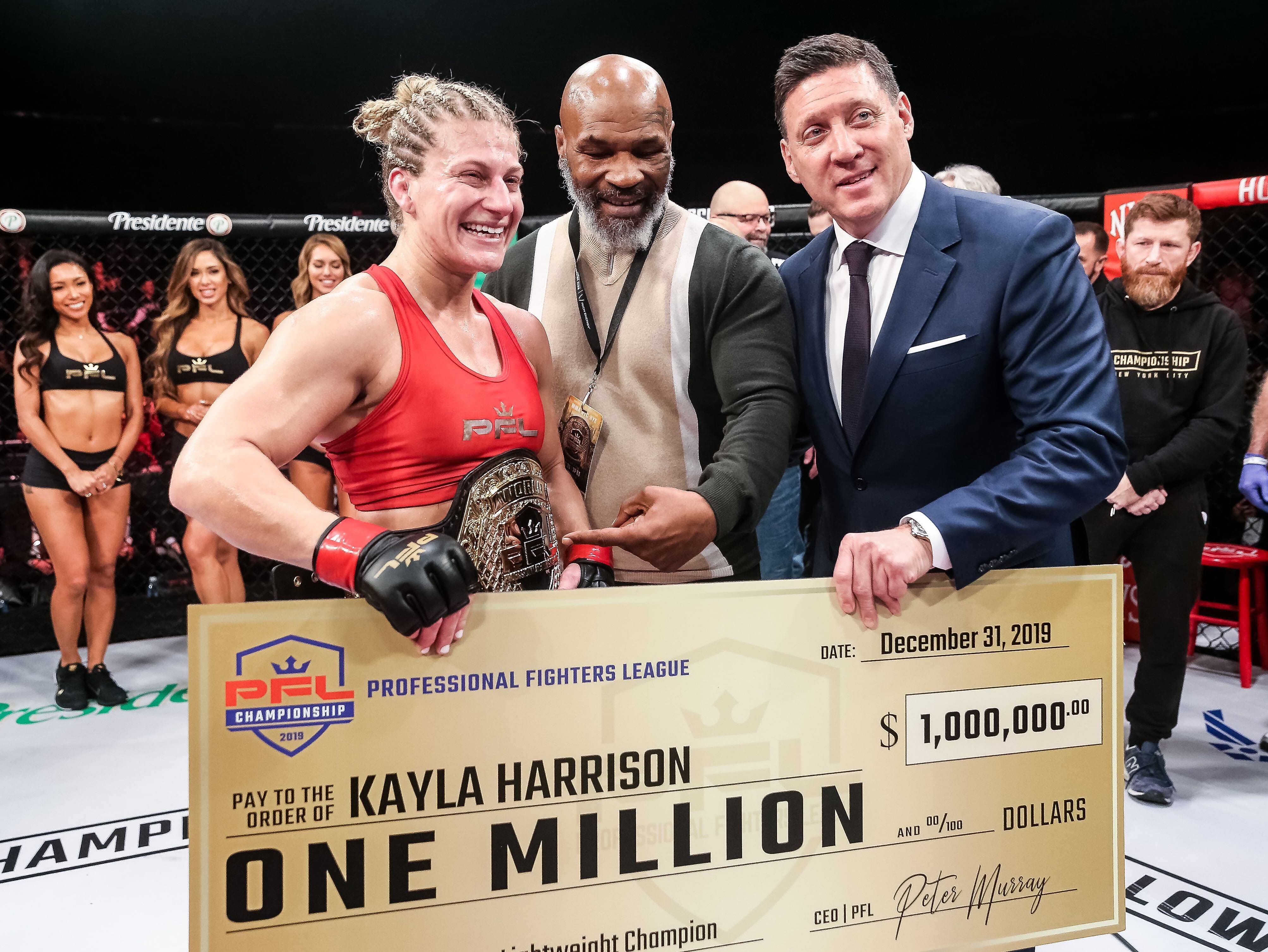 Make no mistake about it, the best female fighter in PFL is Kayla Harrison (9-0). The two-time Olympic Gold Medalist in Judo is an extremely special talent and she’s completely destroyed every opponent that’s been put in front of her.

In her nine professional wins, only two of them have gone the distance. Both of those fights were against arguably the second best PFL female fighter Larissa Pacheco (14-4). Pacheco and Harrison are likely going to meet again during this PFL season.

Harrison made a statement after her last performance and she said after the fight that she’s the baddest woman in any room. She wants the world to see her as the greatest of all time once she’s done competing.

Harrison’s contract with PFL is set to expire after this season. PFL is already having a dream scenario where Harrison ultimately fights Claressa Shields, but that probably will not play itself out.

Assuming Harrison runs through the other PFL lightweights this season and captures another title, she’s going to be the hottest free agent on the market. Harrison will have the UFC and Bellator knocking at her door to take her away.

PFL, Bellator, or the UFC?

The Olympian has been vocal that she does actually believe in the PFL format with seasons and rankings. However, she does recognize that there are big fights out there outside of PFL that could cement her legacy.

Of course, the biggest show in town is the UFC which is the home of the greatest of all time in Amanda Nunes (21-4). Nunes is the UFC’s two-division champion and she’s actually a teammate of Harrison’s at American Top Team.

The PFL champion fired back on Ariel Helwani’s MMA Show stating, “I think that if Dana is ready to pay me a lot of money, I’ll make him a lot of money. I’m ready to face the best in the world.”

Harrison is likely going to win her third PFL championship this year. After the year is over, The Pro Fight League, Bellator, and the UFC will all be calling. My guess is that she ultimately winds up in the UFC especially considering her ability to make 145 pounds. This will definitely be a story to follow at the end of the year.

Tonight at PFL 3, we saw the women’s lightweight division kick off their season. All eyes were on the two-time defending champion and two-time Olympic Gold Medalist Kayla Harrison (8-0).

Harrison took on Mariana Morais (16-10) in the co-main event of the evening. Another matchup I was really looking forward to was the matchup between the 2019 runner-up Larissa Pacheco (14-4) and Julija Pajic (2-1).

Pacheco has only lost to Kayla Harrison and former UFC champions in her career. She’s extremely dangerous and I think she’s the one lightweight in this tournament that can hang with Kayla Harrison.

She proved that tonight at PFL 3. It was clear that Pajic had no business being in there with Pacheco. Pacheco dropped Pajic just seconds into the fight with a beautiful left hook. From there, Pacheco was methodical in beating Pajic up on the ground.

Finally, just about a minute into the round, the referee called a stop to the action. A dominant six-point finish for Larissa Pacheco at PFL 3. As mentioned, many people think she can be a threat to Kayla Harrison and she showed why tonight.

As mentioned, the co-main event of the evening featured the two-time PFL lightweight champion Kayla Harrison. In eight professional fights, nobody has been able to stop Kayla Harrison. Harrison is hoping to pick up her third PFL championship in 2021.

Standing in her way was Mariana Morais who has been in there with UFC caliber talent. While Harrison was the massive favorite at PFL 3, Morais was expected to provide a little bit of a challenge.

However, like all of the opponents before her, Morais had no answer for Harrison. Harrison immediately pressured Morais and was able to get a body lock. Once she got the body lock, she was able to take Morais down and she immediately got the mount.

After Harrison got the mount, it was over in seconds. The two-time PFL champion makes her 2021 season debut in incredibly impressive fashion with a first round TKO.