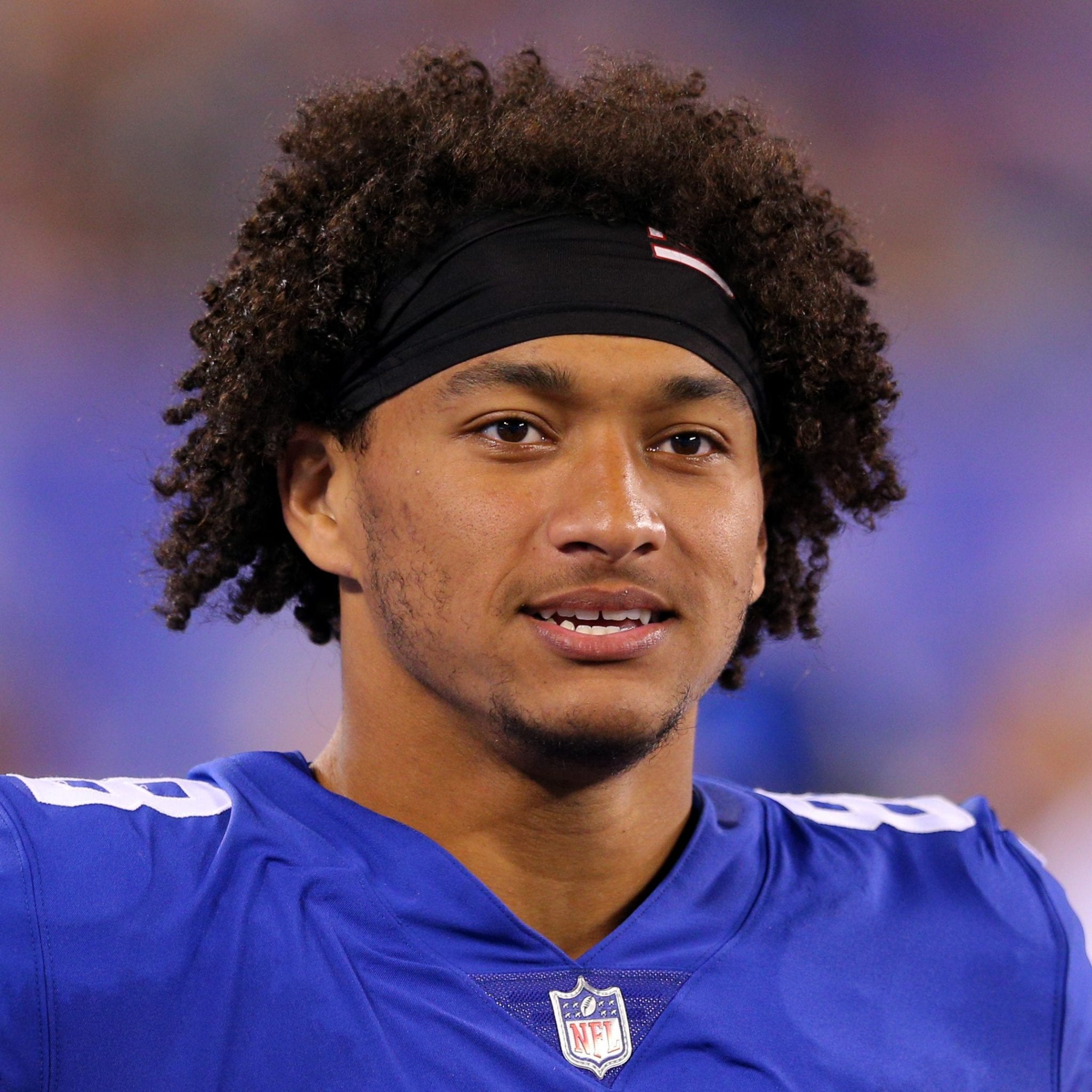 Since being drafted in 2017, New York Giants Tight End Evan Engram has struggled to reach his maximum potential. He has been nagged by injuries for much of his first three seasons. His amount of production has decreased every year since being drafted. And he has most certainly not lived up to the expectations the Giant set when they selected him 23rd overall. With the Giants in need of as much draft capital as possible, trading Engram this offseason would make great sense.

Why the New York Giants Should Trade Evan Engram:

His inability to stay healthy

Health was never an issue for Engram while at Ole Miss. He played in 23 out of 24 games during his Junior & Senior seasons. But since making the transition to the NFL, he has failed to stay healthy for an entire season. He missed only one game during his rookie season but missed five the season after. Through the first twelve games of this season, he has missed four games – and his return is still up in the air.

For a player to find success in the NFL, especially a young one, they need to stay healthy and play as much as possible. The Giants have been unable to see what they truly have in Engram due to him constantly missing games and not truly being 100 percent.

What makes Engram so unique is his athleticism. He ran a 4.42 40 yard dash at the 2017 NFL combine, the best by any tight end in recent years. He has lined up as a wide receiver multiple times, something that shows off his versatility excellently.

Teams across the league would love to have a player as dynamic as Engram is. If Engram were in a system where his skillset could be maximized, he could leap into the class of elite tight ends within seconds. Teams would be willing to give up a lot for a player that is as special as he is. How much is a lot? Well, looking at recent trades across the league, a good starting price for a fourth-year tight end full of potential would be a second-round pick. Gathering as many picks as possible would help a Giants team that is years away from being a contender.

The emergence of Kaden Smith

A number of tight ends have tried to replace Engram when he has gone down due to injury over the past three seasons. No player has done a better job at stepping in than undrafted rookie Kaden Smith. Since getting his first start in week 12 against the Bears, Smith has looked like he could be the answer moving forward. He also brings something to the table Engram struggles with – blocking.

Not to bash Engram, but when you are athletic as he is, it can be difficult to block well. Smith manages to find success in Engram’s area of weakness, while still being a weapon in the receiving game. Through two starts, he has posted 12 catches for 88 yards and a score. His most impressive play came in the final minutes of the game against Green Bay. Smith displayed his impressive strength, hands, and route-running ability on the 32-yard gain.

It is time for the Giants to call it quits on the Evan Engram experiment. By trading him this offseason, the Giants would be allowing themselves to build for the future. Sorry Engram fans, but getting a second-round pick to help rebuild the defense or offensive line is worth much more than an athletic tight end. 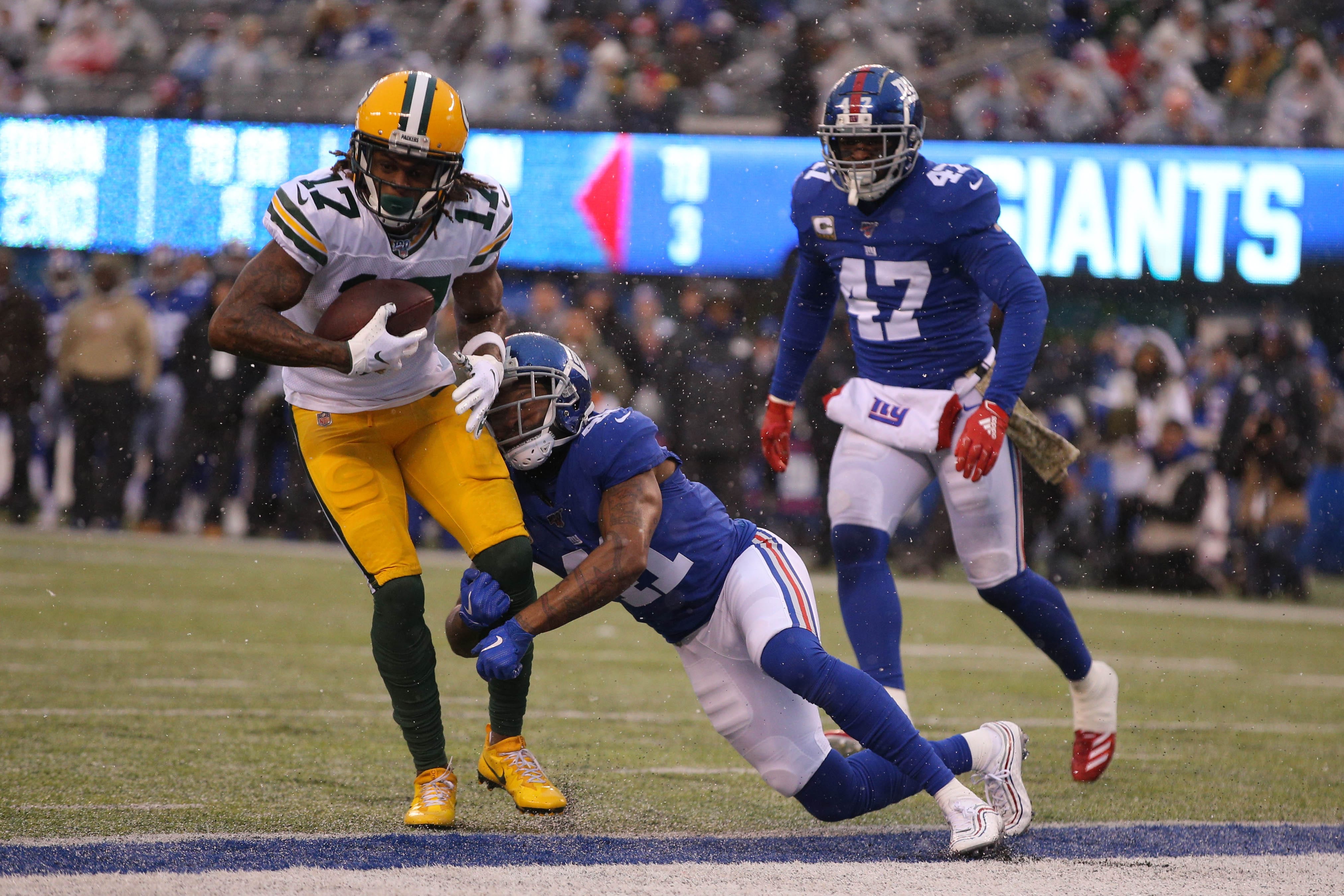 Most didn’t predict the New York Giants would overcome the Green Bay Packers on Sunday in a Week 13 matchup littered by snowflakes and rain. Not even Michael Strahan could find the confidence within to pick his former team to walk away with a win, and he was spot on, as most analysts were before the start of the contest.

The Giants fell 31-13, as rookie passer Daniel Jones threw three interceptions during the blowout. The first half saw the Giants creeping up on Green Bay before the inevitably pulled away with ease.

Let’s take a look at three players that were up and down for the New York Giants:

The 22-year-old rookie earned his inception into the NFL last week, coming down with his first score. Against the Packers, he didn’t pepper the stats with incredible numbers, but he did display great balance in the passing game, logging six receptions for 70-yards.

Smith has quietly worked his way up the depth chart and has filled in valiantly for the injured Evan Engram and Rhett Ellison. He’s in line to receive more playing time due to his reliable performance.

It’s no surprise that Bethea was burned in coverage once again, but to be man-handled by Allen Lazard on a deep touchdown pass was the icing on the cake. Lazar simply changed directions, turning Bethea all the way around, putting him in no position to make a play.

He has shown quality near the line of scrimmage, but he has been a liability in the defensive backfield all season long.

For the second straight week, rookie safety, Julian Love, looked solid in coverage and even came up to make several excellent stops near the line of scrimmage.

JULIAN LOVE with the forced fumble on Davante Adams, in his first career NFL start

This was an excellent sign for the Giants defense, considering their lack of quality across the field, Love has been a breath of fresh air heading into the dead-portion of the season. The Giants are officially eliminated from playoff contention, so any positives from their young players are essential to the team’s growth.

Beal was lined up across from Packers No. 1 receiver DeVante Adams far too often on Sunday. This only indicates that Big Blue is more concerned with logging film on their rookie than winning the football game. Beal struggled heavily in coverage, allowing an easy touchdown to Adams in the fourth quarter.

While Beal has missed the majority of the season, the Giants didn’t allow him to gain confidence as they matched him up with one of the league’s best receivers.

If there’s any takeaway from this season that’s positive for Big Blue, it’s that they have something special in wide receiver, Darius Slayton. The former Auburn standout has seen his hands become glue, and his clutchness evolve throughout the season.

His trust with Daniel Jones has progressed nicely, and Slayton’s ability to come up on third downs has shined through. Without Golden Tate on the field on Sunday, Slayton picked up the slack, managing six receptions for 44 yards. Those numbers aren’t noteworthy, but his presence has undoubtedly been felt on offense.

Golden didn’t have the worst game of the season, but he was almost non-existent in the pass-rush. He recorded just one QB-hit but managed to log eight total tackles.

Golden has been the Giants’ best pass-rusher this season, but a ghost-performance on Sunday helped officially eliminate the Giants from playoff contention. He’s looking to cash in on a productive season, but games like this hurt his value. 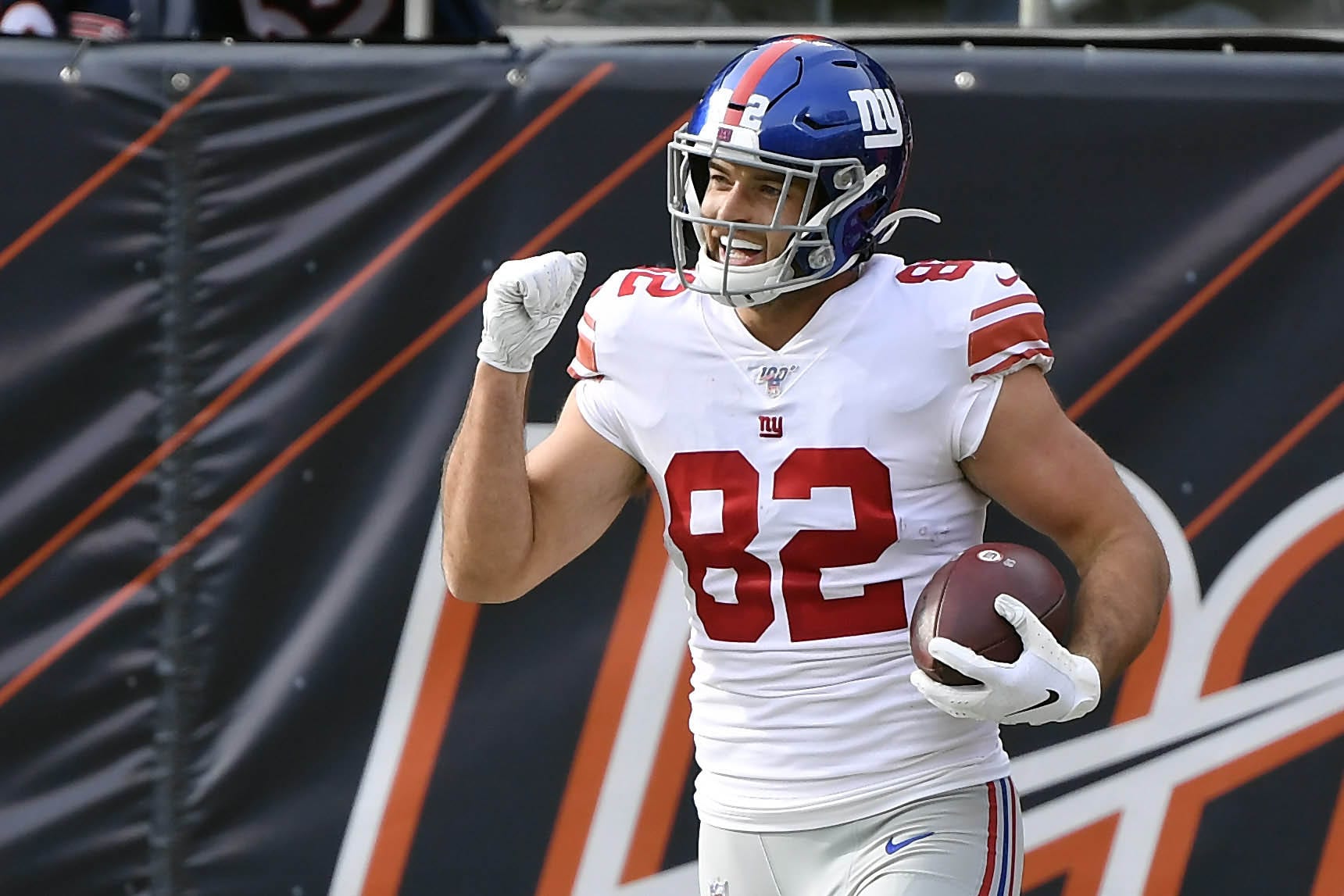 With Evan Engram continuing to miss games with the New York Giants, the offense isn’t able to establish a rhythm that can succeed long-term. Backup/blocking tight end Rhett Ellison also missed the week 13 loss to the Packers with a concussion, but Engram’s inability to stay on the field has been more impactful.

In his absence, the Giants elevated Kaden Smith to the active roster. The rookie had a solid first game in the NFL against the Chicago Bears last week, recording a touchdown. This week, he backed up his promising start with a six-catch, 70-yard performance in the blistering cold.

Smith’s ability to get open in coverage and utilize his body control to make difficult catches could make Egram expendable at the end of the season. Rumors floated to the surface that the Giants were receiving calls from other teams in regards to Engram’s availability before the trade deadline. However, GM Dave Gettleman wanted to keep the elusive tight end put. With Smith’s emergence, trading him next offseason has become a consideration, even a necessity if they can grab a 2nd round value.

The reality is, Engram is excellent when he’s on the field for the Giants, but his lack of blocking prowess and health issues make him expendable. There are other options head coach Pat Shurmur can utilize, if he’s still around in 2020, which I imagine he will be. Smith is a late bright spot for the Giants in the second half of the year, and he’s presenting a solid case that would guarantee more playing time.

Alexander Wilson – What are the priorities for the New York Giants heading into December? 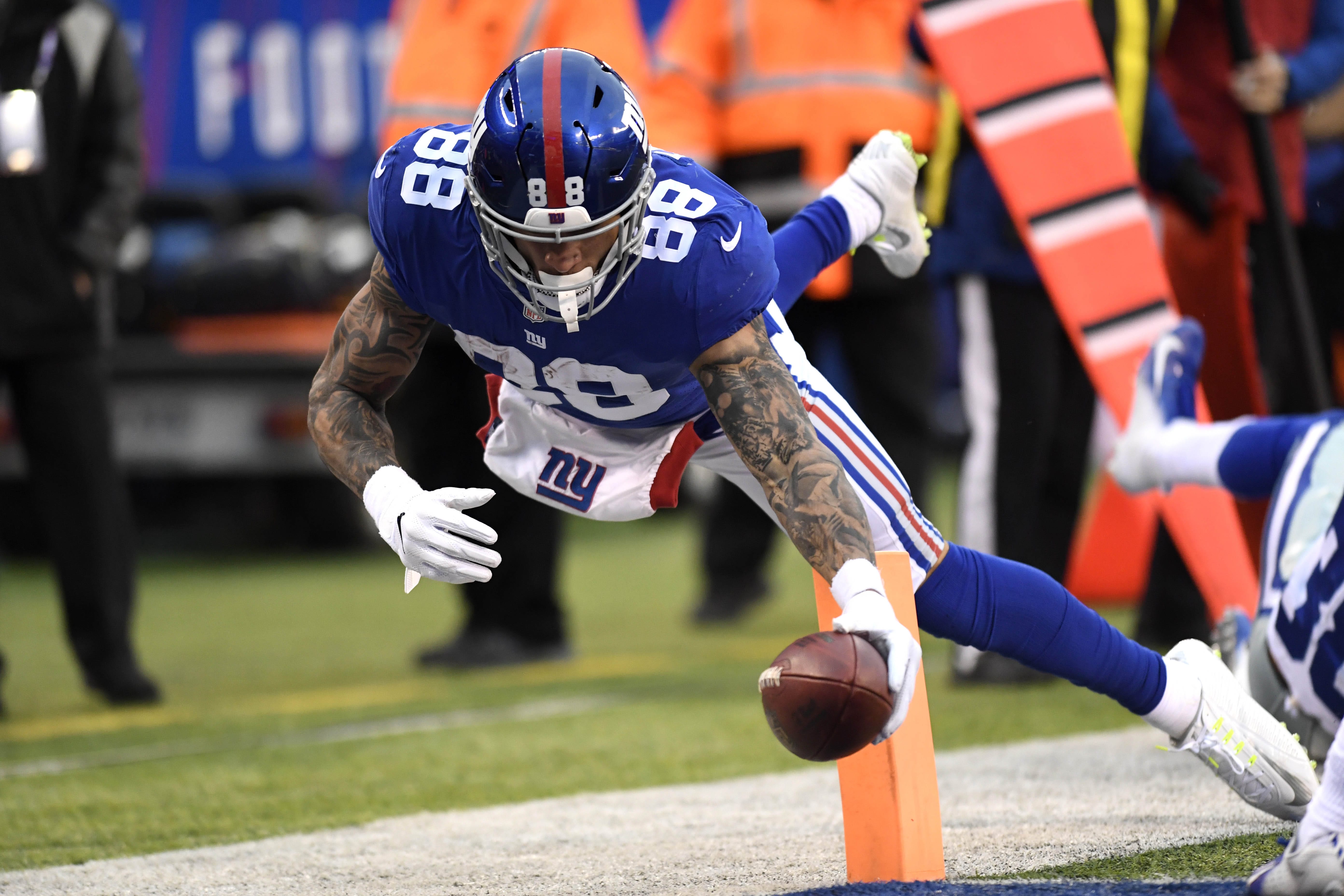 At 25-years-old, New York Giants tight end Evan Engram is in his physical prime, and he has shown versatility on the offensive side of the ball with his elite speed and athleticism. However, as many NFL athletes suffer a similar fate, Engram has been plagued by injuries since his inception into the league.

Over 44 games, Engram has featured in just 34, which indicates a 10 game differential of active/inactive status. Engram is also scheduled to miss a week 13 matchup against the Green Bay Packers, making this his eleventh missed game in three years and his fourth this year.

Some believed GM Dave Gettleman would trade Engram at the trade deadline, maximizing his value considering his injury history. Gettleman could still look to deal him next offseason, as the Giants still have two more years of control over the tight end. Alternatively, they will keep him as a weapon on offense and continue forward despite his issues.

Realistically, keeping Engram seems like the more likely option, as his cap-hit remains low, and he can play an essential part on the offense if the team manages to take a big step forward in 2020.

In the absence of Engram, Big Blue will feature Scott Simonson and Kaden Smith in a more prominent role. Smith, who played in his first NFL game in week 12 against the Chicago Bears, recorded his first touchdown pass on a solid game as a pass-catcher. I can see the youngster becoming a more active part of the offense, especially if he progresses as a blocker.

The New York Giants also have Rhett Ellison on the roster, but he will also miss Sunday’s game with a concussion.