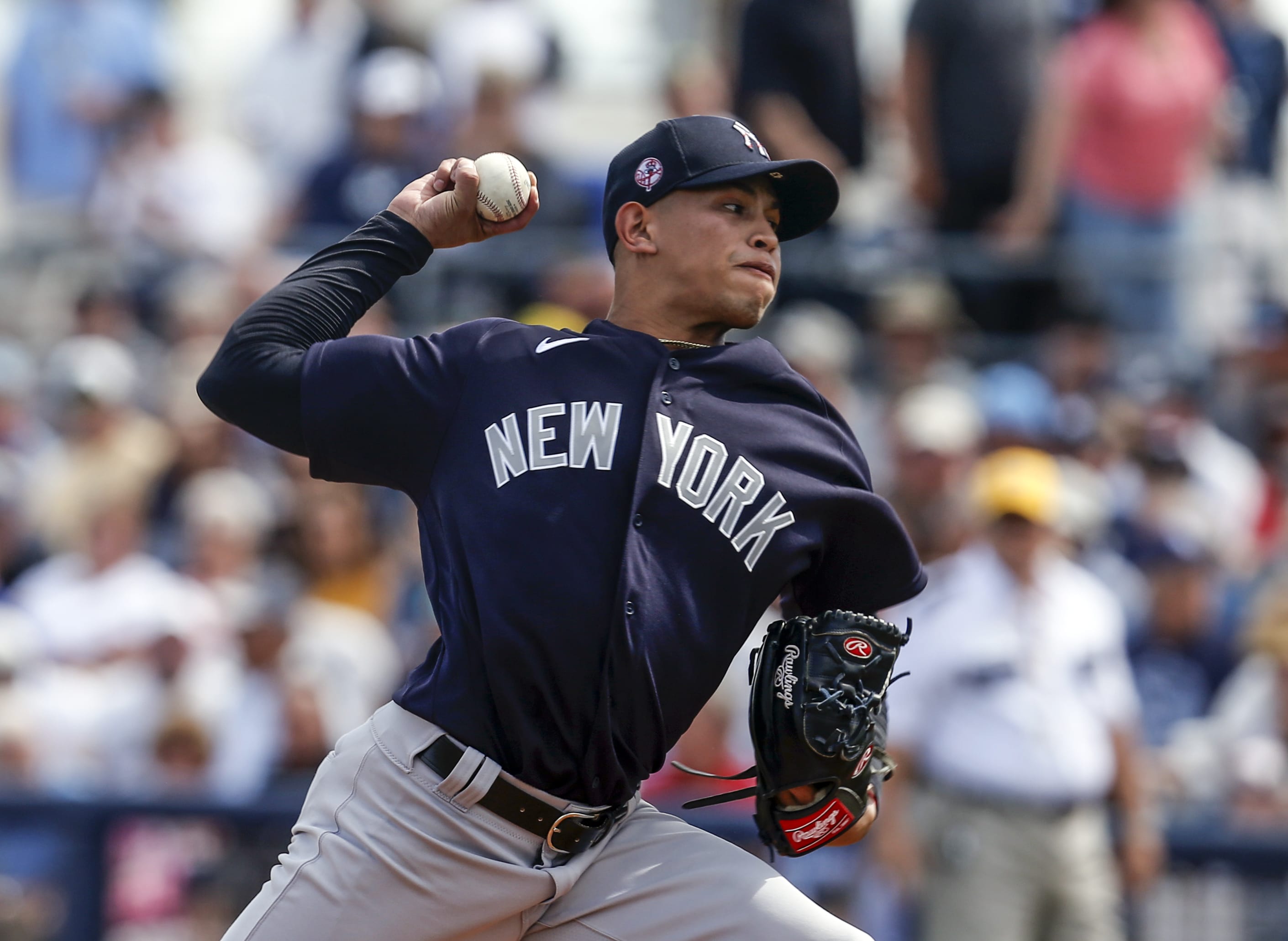 With the 2020 season only a few short weeks away, and with Severino’s injury now fully hitting home, the New York Yankees enter the year with some question marks around their starting pitching rotation. Coming with that, naturally, there are also questions about what players will be used in which roles, and exactly how the Yankees will manage the absences of Severino — and German & Paxton for some time — remains to be seen.

However, one guy who is continually being overlooked is Jonathan Loaisiga. With Loaisiga, I don’t look at him and see a guy slot into the rotation for a few months, then be tossed back into a low-pressure role in the bullpen. Loaisiga has three quality pitches and two great ones, and if he is to be solely used as a bullpen arm, I think he is very similar to longtime MLB great, Greg Holland. With that, the first similarity is the size of both pitchers, in that they’re both 5’11 and have a similar delivery as well, where they rely on movement to get their outs.

Behind the Scenes Comparison between Holland & Loaisiga

Now, looking at the table, and without seeing any results or statistics to go with them, Loaisiga is a very comparable pitcher to Holland. While his breaking pitch has more bite than Holland’s, Holland threw a power slider that resulted in incredibly efficient results, whereas Loaisiga throws a hefty curveball.

CLICK HERE TO CHECK OUT OUT LATEST FIRESIDE YANKEES PODCAST

The purpose of using Spin Rates and Whiff Percentages is to show whether or not the ball is flat, or if it has life and dances. Whiff % is fantastic because it pairs perfectly with spin rate, and shows the results of said pitch. For Loaisiga, his fastball is better than Holland’s was, as part of the reason is true that he throws it an average of 97 MPH, and with that much movement. Interestingly enough, Loasiga’s fastball PutAway % of 22.1% would’ve been the second-highest of Holland’s entire career. Not to mention that Loaisiga’s Batted Ball profile was also solid, as he only gave up a Barrel % of 4.7% — for reference, Britton was at 5.0% and Chapman was at 4.9%.

With that, the breaking ball is where Loaisiga really can shine. His 45.8% Whiff % on his curveball shows that when he hits his spot, and the ball gets the proper break and movement on it, that that pitch is lethal. For Jonathan, working on ironing out the inconsistencies within that pitch, and even his changeup as well a bit would go a long way for his future with this team. His curve in 2019 was his only positive pitch, according to Fangraphs Pitch Values, as it sat at a 4.3.

Essentially, Loaisiga did everything right with his curveball, on the back-end at least, but still didn’t see all that many results from it — as seen by the 19.3% PutAway % to the 45.8% Whiff %.

How he can Improve on his ’19 season

For reference, last season Loaisiga pitched 19.2 innings out of relief, in a limited role. In those innings, he posted an ERA and FIP of 3.20 & 4.38. While the FIP is well higher than his ERA, his numbers were weighed down and massively affected by his lack of control. Loaisiga has stellar stuff, and if he can knock down the rate at which he gives up the long-ball, and also if he can limit the walks — 4.55 BB/9 in ’19 — there’s a great case to be made that Loaisiga tosses 80 innings out of the pen.

Being only 25 years old, and having two plus pitches (fastball and curveball) should be enough of a foundation for him to continue to improve and work, as the New York Yankees have faith in his abilities. ZiPS and Steamer both project Loaisiga’s ERA and FIP to hover right around 4.20 for 2020, which would be another large step forward in his MLB career. If Loaisiga is to end up at around what the projections say — high 50’s for IP, K/9 over 10.00, and seeing a significant drop in his BB/9 and HR/9 — then Jonathan Loaisiga will be a name to watch this upcoming year.

The Greg Holland comp may be a bit washed, as Holland is now ultimately a below-average relief-pitcher, as he is 34 years old. However, prime Holland with Kansas City was one of the most dominant relievers in the game of baseball. Similar to Loaisiga, Holland strikes out batters at a high clip, but also walks a chunk of them as well — 11.53 career K/9 & 4.06 career BB/9. Holland excelled at limiting hard contact, as the percentage of balls that are considered “Hard Hit” never crossed 30% from the years 2011 to 2015. As for Loaisiga, if he can limit the hard-hit balls, and improve the 40.0% HH% from ’19. If Loaisiga can even mimic the performances from Holland’s hey-day (’11-’17), then the New York Yankees have themselves quite the talented arm that’s flying under the radar.

Everyone likes to talk about the back-end of the Yankees pen, as ultimately it is arguably the best in all of baseball. However, what makes this bullpen the “Pinstripe Pen of Doom” is the fact that at any given time, any arm in the flurry of options can go out there and get three outs. In the front end of the pen, being able to throw out one of Cessa, Loaisiga, and Green goes to show that the Yankees put just as large an emphasis on the “lower-leverage” situations, as they do the big moments.

Jonathan Loaisiga looks to take another large step forward this year and help the New York Yankees compete for 28.

On Monday, the New York Yankees presumed ace Luis Severino was scratched from his first spring start due to what the team called “rotator cuff inflammation” and will be shut down for two weeks. Yankees skipper Aaron Boone said that it is “highly unlikely” that Severino will start the season with the team, forcing the Yankees to look for a new opening day starter. Severino was warming up in the bullpen and felt pain in his shoulder at about 1PM, 10 minutes prior to first pitch.

With Severino likely not on the 25 man roster to start the season, this leaves the fifth starting pitcher position wide open. Plus, how severe is Severino’s injury anyway? We’ll look into all of it right now.

From what we hear, the Yankees are not particularly concerned about Severino…. yet. When he had his MRI Tuesday, the results came back quite clean. With that being said, he should be cleared after two weeks if his shoulder isn’t hurting. No Tommy John surgery has been recommended, but if he continues to have pain after the two weeks, the team will grow more concerned.

The plan is to begin a throwing program after the two weeks, then get him some in-game action before camp breaks and the team heads to Washington for an exhibition. My guess is that he would spend a week or two in extended spring training before going to Trenton and/or Scranton for a few rehab stints. Remember, CC Sabathia is also a few weeks behind due to his offseason heart surgery and will also likely not be on the opening day roster.

When talking about free-agents, two names come into the minds of Yankees fans: Dallas Keuchel and Gio Gonzalez.

In 2018, Dallas Keuchel had a rather down season, his ERA at 3.74 in just over 200 innings. A lot of people thought that the Yankees might push towards him more than signing JA Happ or acquiring James Paxton. But the team didn’t and now heading towards the middle part of March and spring training, he remains a free-agent.

Gio Gonzalez had an ERA last season of 4.21, but remained effective with a 10-11 record in just over 170 innings. Gonzalez, now 33, was a former first round draft pick in 2004. He could still be a fit for any team, and his stats show those of an average fifth starter.

But which one is the better option? In my opinion, Gonzalez is. Gonzalez is older than Keuchel and is now fit to be a five starter, and will not want a whole lot of money. Keuchel was the Astros number one starter just a few years ago, but is now settling as more of a two or three starter.

If Keuchel was available after the 2019 season, the Yankees would jump right on board with him, but they have a solid rotation when healthy. Signing Keuchel would be expensive, and would force the Yankees to really rearrange their pitching staff once everyone is healthy. With Gonzalez, you can DFA or release him and not lose much of anything for your team or salary.

The Yankees have a few guys who could replace both Severino and CC in the first few weeks of the season.

Luis Cessa is the first name Yankee fans jump to. Cessa hasn’t had it that great so far in the big leagues, an ERA a bit under five and a 5-11 record. He is slowly improving, but the problem is that he’s out of options. If he starts in the MLB this season, to send him to Scranton they must DFA him and hope he clears waivers.

Domingo German struggled last year for the Yankees, making some starts for injured pitchers in the springtime. His ERA was over 5.50 and won just two games in 14 starts. But his start this spring has been promising, giving up no runs thus far in 4 2/3 innings.

Jonathan Loaisiga, or “Jonny Lasagna” also made a few starts last season, but had an ERA over five despite going 2-0. He definitely needs some more work, and got hammered on Tuesday against the Cardinals, giving up four runs in 2 1/3 innings.

It remains unknown how the Yankees will fill Severino’s hole to start the season, but either way the team goes, there are options.