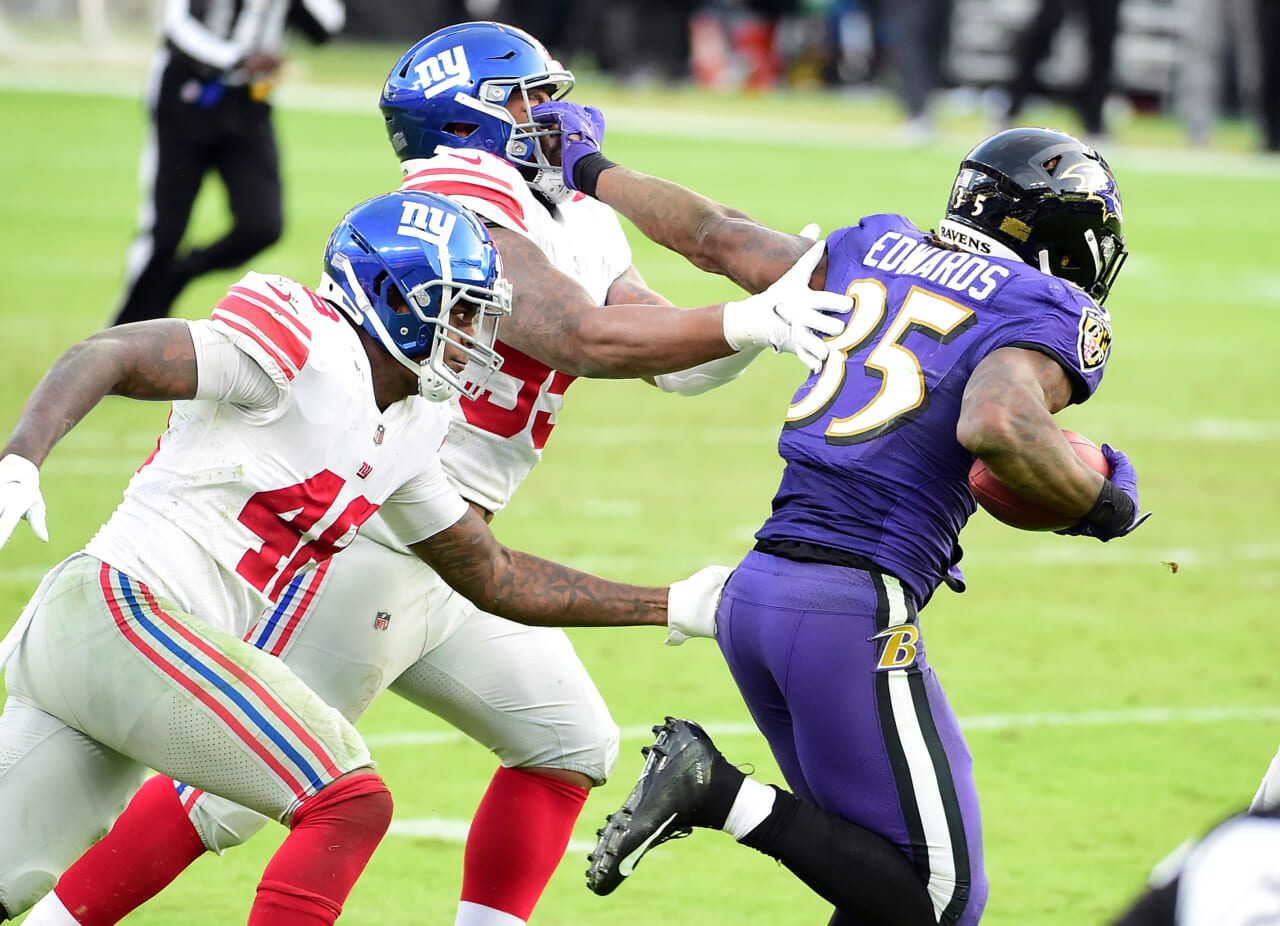 The New York Giants suffered a brutal loss to the Baltimore Ravens today. This was largely considered to be a must-win game as the Giants are pushing to narrowly win their division and make the playoffs.

Unfortunately, the Giants were not able to pull out this win and lost to the Ravens by a score of 27-13. The Giants were playing from behind for the entirety of this game as Baltimore cruised ahead to their tenth win of the season.

The Ravens have the best rushing attack in the NFL. Heading into this game, Baltimore had run for 100 yards in every single game this season. They had totaled 200 or more rushing yards in four games this season. With a dominant performance on the ground on Sunday, the Ravens pushed the total to five 200 yard rushing games in 2020.

The Ravens ran all over the Giants

The New York Giants could not stop the Baltimore Ravens’ rushing attack on Sunday. Granted, every team has failed to shut down the Ravens’ run game. But New York’s defense was dominated by the Ravens’ offense on the ground.

The Ravens had numerous runners thrash the Giants in Week 16. The Baltimore Ravens averaged 6.2 yards per rushing attempt. Their leading rusher, Gus Edwards, had 15 carries for a total of 85 yards. Edwards was not the only rusher to reach 80 yards on the ground, though. Quarterback Lamar Jackson totaled 80 rushing yards on 13 carries.Â On top of that, the Ravens had a third rusher near in on 80 yards. Rookie running back J.K. Dobbins ran the ball 11 times for 77 yards.

The Baltimore Ravens’ offense racked up 249 rushing yards against the Giants. This is Baltimore’s third-highest rushing total in a single game this season.

The Giants’ defense had no answers for the Ravens’ rushing attack. Baltimore was able to score two touchdowns through the air today, but they were set up by the running game. The Ravens totaled only 183 passing yards against the Giants. Lamar Jackson took what the defense gave him in the passing game, but Baltimore did nearly all of their damage in the running game.

Despite this disappointing loss, the Giants are still alive in the playoff hunt. But in order for them to secure the NFC East, New York needs to be better on both sides of the ball. The Giants will play the Dallas Cowboys next week in another must-win matchup. Dallas ran the ball for 151 yards today and has eclipsed 100 rushing yards in nine of their fifteen games this season. If the Giants want to go to the playoffs, they need to improve their run defense immediately. 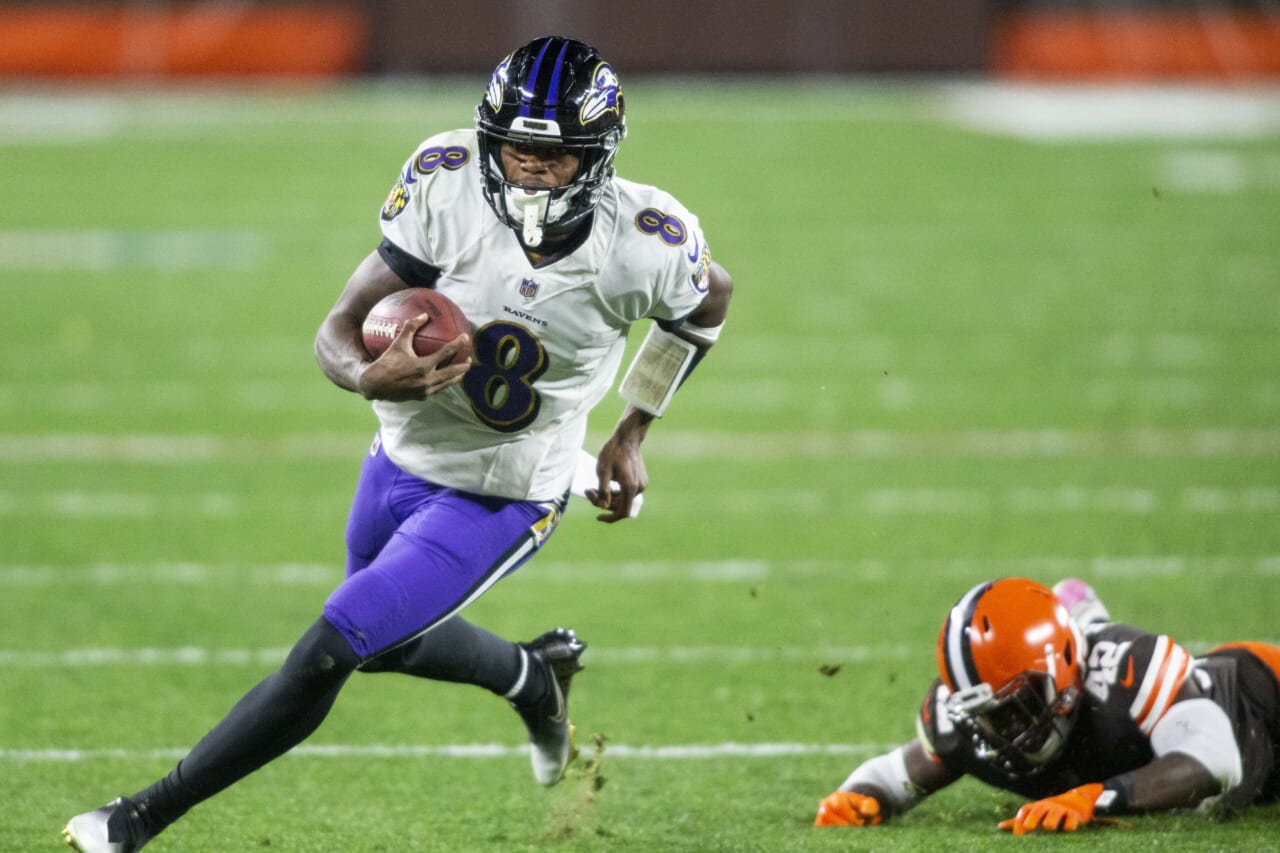 The New York Giants lost their Week 15 matchup with the Cleveland Browns last Sunday night. The Browns possess one of the best rushing attacks in the NFL this season, but the Giants kept them mostly in check on the ground. It was through the air that Baker Mayfield, Kevin Stefanski, and the Browns offense did the majority of their damage.

The Giants held the Browns’ offense to only 106 rushing yards, which is far below their season average of 152.6 yards per game. This week, the Giants will be facing another AFC North team. This team, the Baltimore Ravens, also has one of the best rushing offenses in the NFL. The Ravens are averaging a league-high 172.7 rushing yards per game in 2020. The Giants need to contain speedy quarterback Lamar Jackson and the Ravens’ running backs to pick up a necessary Week 16 victory.

Of course, the Ravens’ offense is built around Lamar Jackson, the 2019 NFL MVP. Jackson is the fastest quarterback in the NFL and is absolutely electric with the ball in his hands. The Louisville product is averaging a league-high 6.1 yards per rushing attempt and has already matched his career-high with 7 rushing touchdowns this season.

The Ravens have scored 7 rushing touchdowns in the last two weeks alone. They have totaled 21 rushing touchdowns this season. The number one priority for Patrick Graham and the New York Giants’ defense this week will be to stop the run. 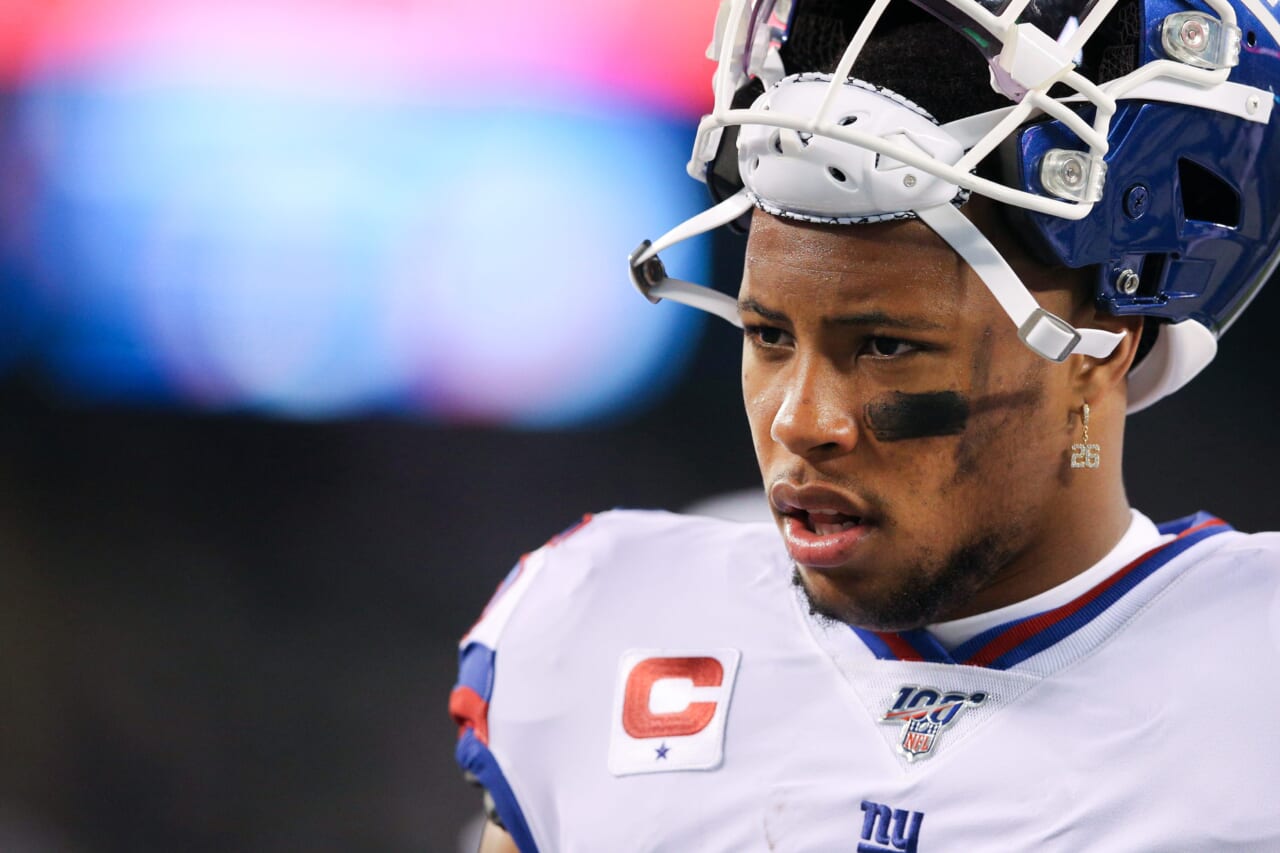 Jonathan Taylor is the top back in this class. He was the best running back in college football last year. Taylor is THE do it all back in the class. Heâ€™s got everything you want in a running back and then some. Heâ€™s got high IQ, good elusiveness, good leadership. Heâ€™s an excellent back and could really be one of the safest playmakers in the draft overall. Taylor would have an expected value of being at a level similar to Gordon. If he lives up to his potential and then some, he can outplay this comp. Taylor is a canâ€™t miss pick at running back.

Dobbins is far and away my favorite back in this class. Heâ€™s a fierce runner, patient, elusive and has phenomenal vision. Dobbins is a do it all back. Heâ€™s got potential to be a lead back very shortly. Dobbins has such a patient and violent running tactic that Bell is a great comparison for him. Dobbins would be very high on my board if I was a GM based on tape, which leads me to wonder why heâ€™s not as highly rated by the general media.

Swift is well, swift. Heâ€™s a really elusive back who excels in open space. Heâ€™s got a game breaking ability with the ball in his hands. Heâ€™s good catching the ball out of the backfield. Heâ€™s also very good in open space. Swift would be a great back in a lot of offenses immediately. Thereâ€™s not a lot of questions with him. How his game will translate to the next level shouldnâ€™t be a question because Georgia is a running back factory. Swift reminds me of Kamara because of his success in open space.

Helaire is maybe my 2nd favorite back in this class. Helaire flashed signs of his full potential last year in an offense where Joe Burrow stole the headlines. Helaire is a really good back and he can be a lead back in an offense at some point soon. Every LSU staffer and teammate has given him rave reviews, theyâ€™ve even said heâ€™s still capable of much more. Helaire and his running style reminds me heavily of vintage Ray Rice. Helaire has a lot of potential and Iâ€™m excited to see him at the next level. The only question marks revolve around whether or not he can truly fulfill that potential or if he just succeeded because of the talent of his quarterback.

Perine is a very strong running back. He dominated the bench press and flashed strength. He does lack that incredible burst. Perine is more of a do it all back capable of grinding out yardage. Perine is very similar to Tj Yeldon in the sense of being able to pick up 1st downs as a grind out yardage back. Perine can be a very productive back out of a committee. Perine has a lot of questions, the biggest being if he can develop into a more elusive back. If not than heâ€™ll be an above around ground and pound back at best.Â