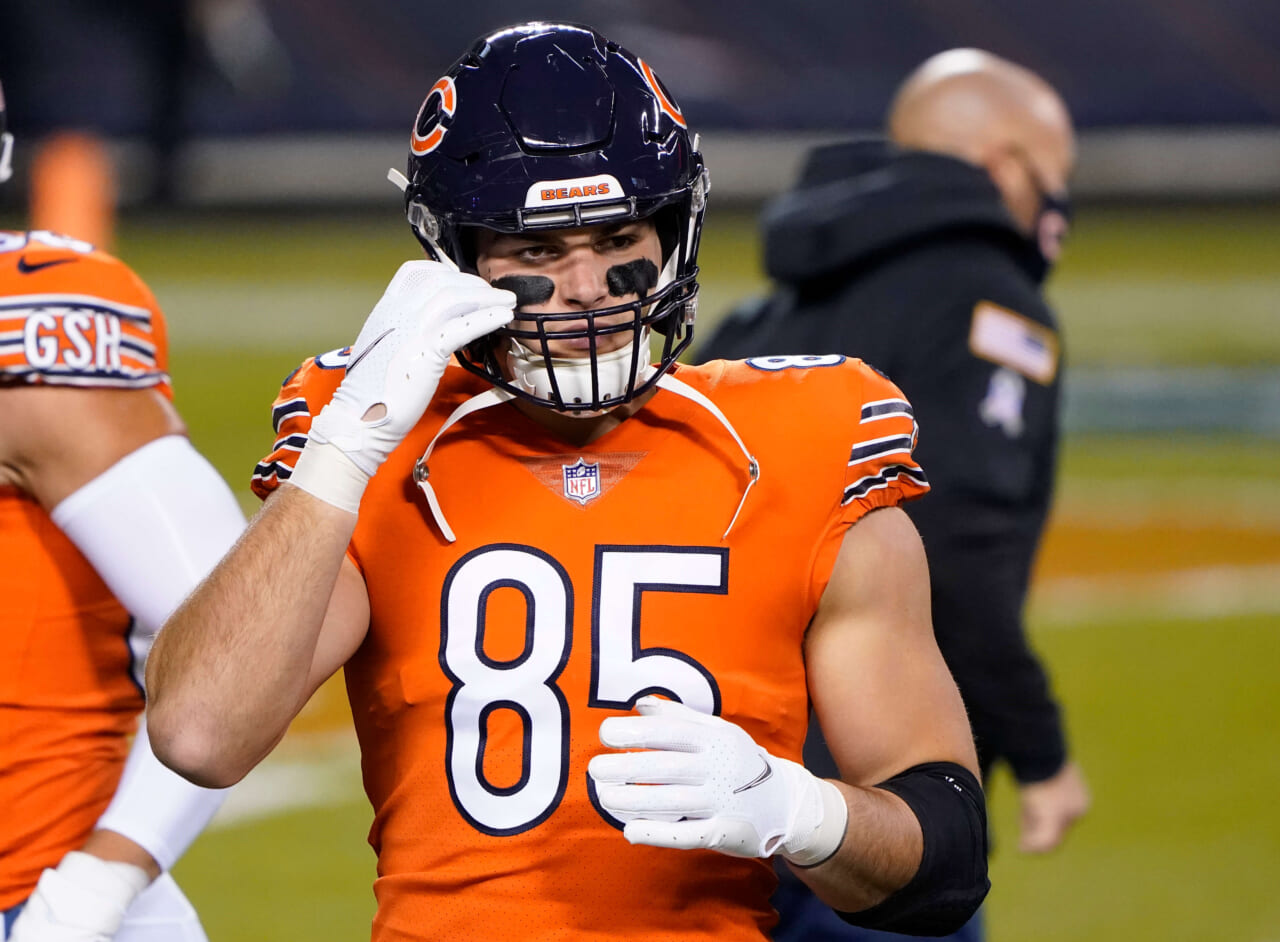 SEATTLE, WA.,–After winning in week 16, the Chicago Bears have now moved to 5-10 on the year and while a playoff spot is out of reach, let’s recap the Bears 25-24 win over the Seattle Seahawks.

1) Nick Foles final stat line may not be the flashiest but on a snowy day, he did average 7.1 yards per pass attempt. Foles’ confidence was apparent while slinging the rock all afternoon. Two throws sum up this confidence: The 15-yard touchdown to Jimmy Graham and the two-point conversion to Damiere Byrd. In both instances, Foles gave his playmakers a chance.

2) Despite having what seemed to be a solid day, running back David Montgomery averaged just 2.1 yards per carry. Seattle keyed in on Montgomery, hoping to stop him early and often. It is worth noting the Bears abandoned the running game early, which also contributed to Montgomery’s final stat line.

3) Speaking of running backs, Sunday was an ideal time to use rookie Khalil Herbert, who had a 20-yard rushing touchdown. The Bears have to start thinking about the future at some point and what Herbert brings to the table as a player who can spark an offense. Whenever Herbert has been given the rock this season, the Bears have moved the ball effectively, including big chunk plays.

4) Let’s stick with the young guys for just a second here. Rookie WR Dazz Newsome had just one reception for 10 yards on the afternoon. But why does Newsome’s lone reception stick out? It was in a third-and-long situation, helping Chicago move the football and keep the drive going. The Bears have to look into getting Newsome involved more over the final two weeks to gain just enough of an idea of what he can do for the team going forward.

5) The foregone conclusion seems to be that head coach Matt Nagy is getting fired at the end of the season. And for the Bears, there is no turning back. But players are still fighting and playing hard for Nagy. When the Bears do eventually relieve Nagy of his job duties, it will be a tough pill to swallow around Halas Hall in what is a results-based business.

“Coach Nagy, he’s an amazing coach, an even better person,” said Montgomery following the game. “I feel like everybody kind of got weird, this bad depiction of who he is but he’s also, he’s actually a great guy and a great coach. Ever since I’ve been on the Bears, day in and day out, he’s always emptied his cup.”

6) Pass rusher Robert Quinn needs just one more sack to set the Bears single-season sack record, surpassing Richard Dent, who currently holds the record with 17.0 sacks. Every time Quinn was asked about the record in his postgame press conference, he simply decided to knock on wood and maintained the stance that while his individual year is something noteworthy, it doesn’t mean much considering the way the Bears season has gone.

“Well my individual year don’t seem as great because we aren’t winning,” said Quinn. “Haven’t had the success over the year as a team so it’s kind of, for a split second, I could be proud of myself but then the next second, I’m kind of quite highly upset because we lost.”

7) Veteran CB Artie Burns started the game for the Bears before Chicago decided to slowly insert rookie Thomas Graham Jr. into the game. Burns hasn’t blown anyone away but has still showcased enough potential to warrant being on the roster in 2022 and competing for a spot. Despite being beat by Seahawks WR D.K. Metcalf for a 41-yard touchdown, Graham Jr. had a solid showing as a player who is looking to put strong performances together to kickstart his career as a starter in 2022.

8) Cole Kmet and Darnell Mooney once again had strong showings as the Bears 2020 draft class showed up once again. Mooney had a 30-yard reception on the Bears’ final touchdown drive while Kmet had two receptions for 30 yards to set up a field goal for the Bears. Chicago needs to be pleased with the progress both players are making this season, especially as the Bears continue to look ahead to 2022.

9) Speaking of Mooney, he had five receptions on Sunday afternoon, now giving him 62 receptions on the season. Mooney has already surpassed his reception total from 2020, which was 61. With two games left, Mooney has a chance to get to 70 receptions as he continues to ascend into the face of the WR position for the Bears.

10) The Bears defense put together another strong showing on Sunday afternoon and while there were times where it appeared as if Seahawks QB Russell Wilson was going to take over the game, Chicago held Wilson in check. Wilson was just 16-for-27 with 181 passing yards and a QBR of 30.8. The Bears’ entire gameplan was predicated on stopping Wilson, knowing he covers up for a lot of holes on the Seattle offense.

Recently, the folks at PFF released their annual tight end rankings in preparation for the 2021 NFL Season. Zero Chicago Bears out of the 32 position players listed. Considering that at this point last year, the Bears had a whopping TEN tight ends on the roster, you would assume that at least one of them would make the cut, right? Wrong. Whether you like General Manager Ryan Pace or not, you cannot deny his spotty record when it comes to tight ends. Consider the failed Adam Shaheen project, and numerous attempts at finding long-term option fans were rewarded with Jimmy Graham, Cole Kmet, and Demetrius Harris.

With Jimmy Graham’s future clouded in mystery, Cole Kmet being used as a swiss army knife, and Demetrius Harris just being there for a couple of plays before being cut, this Bears fan is wondering the following questions:

#1 What are we doing with Jimmy Graham?

Jimmy Graham anchored the Chicago Bears’ red zone offense in 2021, leading the leagueÂ in touchdowns amongst tight ends in the 2021 season with seven. Graham seemed to have an age-defying season with the Bears after following up a disappointing season in Green Bay that saw him haul only three touchdowns. If Graham can continue his dominating performance in the red zone, why would the Bears be willing to part ways so soon?

Salary Cap. The Chicago Bears currently have the second-worst cap situation in the NFL, with only $219,852 sitting in the bank. According to Overthecap, Jimmy Graham’s contract currently costs the Bears $10M. Cutting Graham after June 1st would free $7M in space.Â  Deciding whether or not Jimmy Graham is worth the $10M in cap space must be a top priority for Ryan Pace and the rest of the Front Office.

#2 Are we going to let Cole Kmet shine?

Chicago loves Cole Kmet. Cole Kmet loves Chicago. Bears fans want to see the hometown kid shine in the national spotlight. I think Cole Kmet has every tool necessary to take a major step forward in 2021. Kmet is an ideal “Y’ tight end, but his athleticism allows him to play in the flex if he wanted to. Nagy seemed to have taken a slow and steady approach in introducing Kmet to the NFL, relegating his abilities to the “H,” essentially an extra blocker. However, as the season progressed, fans could see a little more of what Kmet has in his repertoire.

Cole Kmet could benefit from his new QB, Justin Fields. Bears fans need not forget that the current QB/TE dynamic duo of Mahomes/Kelce. Matt Nagy crafted the relationship between the league’s most fearsome QB/TE duo. It’s a bit of a stretch, but with Nagy’s coaching history and the similar skill set of both Fields and Kmet to Mahomes and Kelce, we very much could be witnessing the birth of a new dynamic duo in Chicago.

Ultimately, Kmet needs to be used more in the passing game. If the Bears are confident he has taken the next step, they might feel comfortable releasing Jimmy Graham. I’m predicting that if we see a Graham release, we will see more of Kmet.

We love to throw names around from a fan’s perspective and pretend that they fit into our offensive scheme. Fortunately, as I state above, we have a head coach who loves tight ends. The Bears relied heavily on 11-personal in 2020, meaning one tight end and one tailback. In fact, 56% of all play calls were in this personnel scheme, according to Sharp FootballStats. This reliance on the 11 personal stayed steady. A small increase in the 12 personal (adding an extra tight-end) occurred in the second half of the season.

With this in mind, if Nagy doesn’t scheme for multiple tight-ends, what’s the point of having so many? Obviously, we would need a solid backup if Cole Kmet gets injured. But do we need to stack for talent at the tight-end position when the offense relies on one?

J.P. Holtz and Jesper Horstead remain on the roster. Both players are solid “H” tight ends. Ideally, I hope to see Kmet and Graham used as passing options while Holtz and Horstead are used primarily as blockers.

The Chicago Bears sure have some work to do in the TE position. I hope we see Graham stay, and I think his performance in 2020 can continue into 2021 if he’s willing to play. His cost is worth the potential reward in a basic cost-benefit analysis. Regardless of performance this season, I’m confident the Bears will draft a TE in the 2022 NFL Draft. Names to watch in this college football season are; Charlie Kolar (Iowa St.), Jalen Wydermyer (Texas A&M), Isaiah Likely (Coastal Carolina), and Jeremey Ruckertt (Ohio St.)