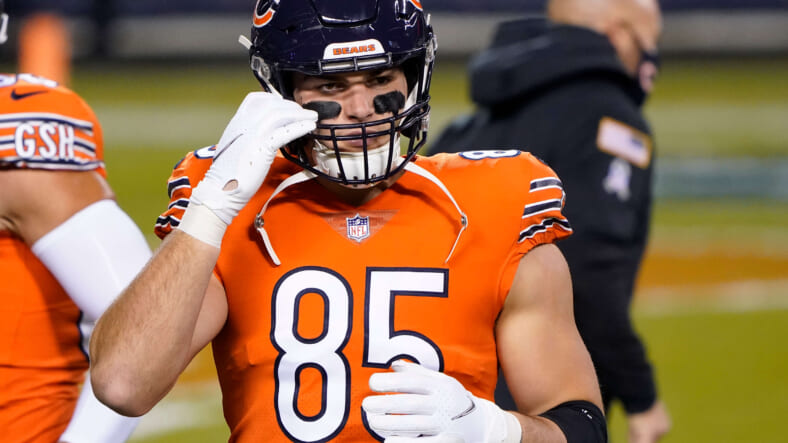 Recently, the folks at PFF released their annual tight end rankings in preparation for the 2021 NFL Season. Zero Chicago Bears out of the 32 position players listed. Considering that at this point last year, the Bears had a whopping TEN tight ends on the roster, you would assume that at least one of them would make the cut, right? Wrong. Whether you like General Manager Ryan Pace or not, you cannot deny his spotty record when it comes to tight ends. Consider the failed Adam Shaheen project, and numerous attempts at finding long-term option fans were rewarded with Jimmy Graham, Cole Kmet, and Demetrius Harris.

With Jimmy Graham’s future clouded in mystery, Cole Kmet being used as a swiss army knife, and Demetrius Harris just being there for a couple of plays before being cut, this Bears fan is wondering the following questions:

#1 What are we doing with Jimmy Graham?

Jimmy Graham anchored the Chicago Bears’ red zone offense in 2021, leading the leagueÂ in touchdowns amongst tight ends in the 2021 season with seven. Graham seemed to have an age-defying season with the Bears after following up a disappointing season in Green Bay that saw him haul only three touchdowns. If Graham can continue his dominating performance in the red zone, why would the Bears be willing to part ways so soon?

Salary Cap. The Chicago Bears currently have the second-worst cap situation in the NFL, with only $219,852 sitting in the bank. According to Overthecap, Jimmy Graham’s contract currently costs the Bears $10M. Cutting Graham after June 1st would free $7M in space.Â  Deciding whether or not Jimmy Graham is worth the $10M in cap space must be a top priority for Ryan Pace and the rest of the Front Office.

#2 Are we going to let Cole Kmet shine?

Chicago loves Cole Kmet. Cole Kmet loves Chicago. Bears fans want to see the hometown kid shine in the national spotlight. I think Cole Kmet has every tool necessary to take a major step forward in 2021. Kmet is an ideal “Y’ tight end, but his athleticism allows him to play in the flex if he wanted to. Nagy seemed to have taken a slow and steady approach in introducing Kmet to the NFL, relegating his abilities to the “H,” essentially an extra blocker. However, as the season progressed, fans could see a little more of what Kmet has in his repertoire.

Cole Kmet could benefit from his new QB, Justin Fields. Bears fans need not forget that the current QB/TE dynamic duo of Mahomes/Kelce. Matt Nagy crafted the relationship between the league’s most fearsome QB/TE duo. It’s a bit of a stretch, but with Nagy’s coaching history and the similar skill set of both Fields and Kmet to Mahomes and Kelce, we very much could be witnessing the birth of a new dynamic duo in Chicago.

Ultimately, Kmet needs to be used more in the passing game. If the Bears are confident he has taken the next step, they might feel comfortable releasing Jimmy Graham. I’m predicting that if we see a Graham release, we will see more of Kmet.

We love to throw names around from a fan’s perspective and pretend that they fit into our offensive scheme. Fortunately, as I state above, we have a head coach who loves tight ends. The Bears relied heavily on 11-personal in 2020, meaning one tight end and one tailback. In fact, 56% of all play calls were in this personnel scheme, according to Sharp FootballStats. This reliance on the 11 personal stayed steady. A small increase in the 12 personal (adding an extra tight-end) occurred in the second half of the season.

With this in mind, if Nagy doesn’t scheme for multiple tight-ends, what’s the point of having so many? Obviously, we would need a solid backup if Cole Kmet gets injured. But do we need to stack for talent at the tight-end position when the offense relies on one?

J.P. Holtz and Jesper Horstead remain on the roster. Both players are solid “H” tight ends. Ideally, I hope to see Kmet and Graham used as passing options while Holtz and Horstead are used primarily as blockers.

The Chicago Bears sure have some work to do in the TE position. I hope we see Graham stay, and I think his performance in 2020 can continue into 2021 if he’s willing to play. His cost is worth the potential reward in a basic cost-benefit analysis. Regardless of performance this season, I’m confident the Bears will draft a TE in the 2022 NFL Draft. Names to watch in this college football season are; Charlie Kolar (Iowa St.), Jalen Wydermyer (Texas A&M), Isaiah Likely (Coastal Carolina), and Jeremey Ruckertt (Ohio St.)