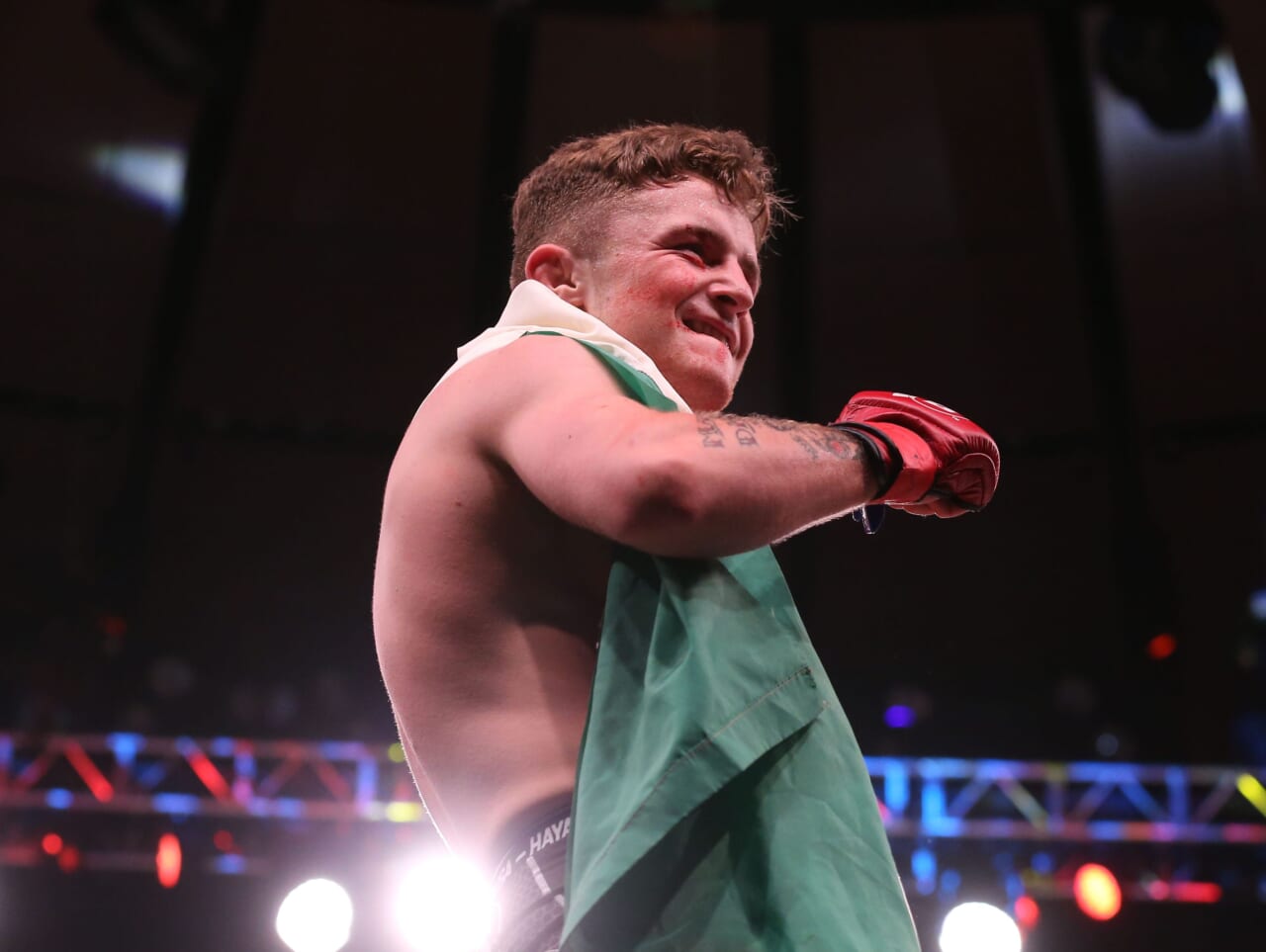 Later today in the co-main event of Bellator 270, we will see a very highly anticipated showdown in the bantamweight division. Ireland’s own James Gallagher (11-1) takes on the toughest opponent of his career in former title challenger Patchy Mix (14-1).

Gallagher will enter Bellator 270 on a four-fight win streak that dates back to 2019. That winning streak started after his lone loss back in 2018 to Ricky Bandejas. Prior to that loss, Gallagher gave off the impression that he was invincible.

However, the devastating loss brought him back to earth and he started taking things a little more serious. Ever since then, we’ve seen him get better and better with each outing and at Bellator 270, he’s looking to jump into title contention.

Speaking of title contention, Patchy Mix is looking to get right back in the mix. Last September at Bellator 246, Mix took on Juan Archuleta for the bantamweight champion. After a great start, Mix gassed in the later rounds and lost a decision. He bounced back with a win over Albert Morales at Bellator 258.

This is an incredibly intriguing fight and judging by most Bellator fans, the fans seem to be more interested in this fight than the main event. Both men are tremendous grapplers and both have tremendous submission skills.

On pure wrestling, I’d give the edge to Patchy Mix at Bellator 270. However, I think their jiu jitsu is essentially a wash with how talented both are. This fight could come down to the striking and I actually like the kickboxing of Gallagher.

That said, I think this fight is going to be razor close. I’m not convinced we are going to see a finish, but instead, I think we see a technical point battle. With Bellator 270 being in Ireland, I have a feeling that Gallagher wins a very close decision.

A massive fight has been booked inÂ Bellatorâ€˜s bantamweight division. The promotion announced today that they have finalized a matchup between James GallagherÂ (11-1) andÂ Patrick â€œPatchyâ€ Mix (14-1).

The matchup will take place atÂ Bellator 270 which will take place on August 27th in Dublin, Ireland. James Gallagher was turning into Bellatorâ€™s version of Conor McGregor just a couple of years ago. The brash Irish contender was even a teammate of The Notorious one.

Gallagher had confidence and he was trying to ride the Irish momentum of Conor McGregor. However, the path wasnâ€™t as smooth for Gallagher. Gallagher was being fast-tracked byÂ Bellator, but then he ran into Ricky Bandejas after an injury layoff.

Bandejas shocked everyone by stopping the Irishman in the first round. Gallagher took the loss well and has since rebounded extremely well. Since that loss, Gallagher has gone 4-0 inside theÂ BellatorÂ cage.

Only one of those fights has gone the distance. This matchup against Patchy Mix is the biggest fight of Gallagherâ€™s career. Should he win this matchup, heâ€™s likely going to get a shot at the bantamweight title.

Originally, these two men were supposed to fight at Bellator 258 on May 7th. Gallagher pulled out of the fight and Mix ended up taking on Albert Morales. Mix got the win by third round arm-triangle choke. It was a good bounce back for Mix who had fought for the bantamweight title and lost in September.

The grappling of Patchy Mix is something to behold. When he fought Juan Archuleta for the title, his grappling alone made it look like he was going to win. His incredible skill on the mat allowed him to control the early portions of his title fight.

However, his gas tank ultimately failed him and Juan Archuleta captured the Bellator bantamweight title by decision. Overall, Mix is 3-1 inside the Bellator cage.

Itâ€™s clear that Bellator is setting this up as a title eliminator. These two headlining a card in Dublin is going to be massive and having a title shot on the line only ups the stakes.

A massive fight has been booked in Bellator‘s bantamweight division. MMA DNA was the first to report that the promotion has finalized a matchup between James Gallagher (11-1) and Patrick “Patchy” Mix (13-1).

The matchup will take place at Bellator 258 which will take place on May 7th. James Gallagher was turning into Bellator’s version of Conor McGregor just a couple of years ago. The brash Irish contender is actually a teammate of The Notorious one.

Gallagher had confidence and he was trying to ride the Irish momentum of Conor McGregor. However, the path wasn’t as smooth for Gallagher. Gallagher was being fast-tracked by Bellator, but then he ran into Ricky Bandejas after an injury layoff.

Bandejas shocked everyone by stopping the Irishman in the first round. Gallagher took the loss well and has since rebounded extremely well. Since that loss, Gallagher has gone 4-0 inside the Bellator cage.

Only won of those fights has gone the distance. This matchup against Patchy Mix is the biggest fight of Gallagher’s career. Should he win this matchup, he’s likely going to get a shot at the bantamweight title. Juan Archuleta is scheduled to defend his title against Sergio Pettis that same evening.Â

Standing across from Gallagher on May 7th will be Patrick “Patchy” Mix. Mix just fought for the bantamweight title back at Bellator 246 against Archuleta. Early on, it looked like Mix was going to become the Bantamweight champion.

The grappling of Patchy Mix is something to behold. His incredible skill on the mat allowed him to control the early portions of his title fight. However, his gas tank ultimately failed him and Juan Archuleta captured the Bellator bantamweight title by decision.

Now, Mix will have his opportunity at redemption. It’s clear that Bellator is setting this up as a title eliminator with the main event being the bantamweight title fight. Whoever wins this matchup on May 7th is going to be the first in line for a crack at whoever wins the belt in the main event.

This past weekend at Bellator Milan, James Gallagher (11-1) made a statement with his performance. The confident Irish bantamweight submitted a very tough and game Callum Ellenor (8-3) in the first round of their main event at Bellator Milan.

There was a lot of heat between the two bantamweights leading up to the contest. Gallagher shoved Ellenor at the pre-fight weigh in ceremony to draw up interest. Throughout the fight, Gallagher did a very good job of beating Ellenor wherever the fight took place.

Gallagher did a fantastic job of using his good kicks to keep Ellenor at range to start the fight. As soon as Ellenor tried to return a kick, Gallagher caught it and dragged him to the ground. That is where Gallagher completely took control of the fight.

Once the two were on the ground, it was all Gallagher. Ellenor tried to get up a few times, but ended up giving up his back to Gallagher. Once Gallagher has your back, you’re in deep trouble. The Irish bantamweight locked up a rear naked choke and won his fourth straight in the Bellator cage.

Gallagher trains at the same gym as Conor McGregor, and he’s bitten off a little bit of that McGregor swagger. Gallagher was the hottest prospect in Bellator prior to him getting demolished by Ricky Bandejas back at Bellator 204.

That was a very humbling fight for Gallagher who had to refocus his career after that loss. Since that fight, Gallagher has gone 4-0 with three wins by rear naked choke inside the Bellator cage. After the fight, Gallagher said that he was coming for that bantamweight title.

Juan Archuleta just captured the vacant title with his win over Patchy Mix back at Bellator 246. Sergio Pettis is likely going to get the next shot at Archuleta. With that in mind, perhaps the promotion could book Gallagher against Patchy Mix.

The winner would definitely be deserving of a shot at the bantamweight title. I think it’s time for Gallagher to take that step up to really elite competition in the Bellator cage. It doesn’t get much better than top contender Patchy Mix.

Tomorrow night, Bellator MMA is back in action for their ninth Europe event that is taking place in Milan, Italy. In the main event of the evening, you have a bantamweight contest between James Gallagher (10-1) and Callum Ellenor (8-2).

This is a big fight for Bellator‘s bantamweight division. Last month at Bellator 246, we saw the promotion crown a new bantamweight champion in Juan Archuleta (25-2). Sergio Pettis is likely going to get the next crack at him.

However, Gallagher might not be far behind. The brash Irish fighter is looking to make if four in a row inside the Bellator cage tomorrow night. Gallagher has only had one speedbump in his Bellator career thus far. That was his knockout loss to Ricky Bandejas.

Since that loss, Gallagher has rattled off three in a row. The Irishman is very slick on the ground with eight of his ten professional wins coming by submission. Gallagher is becoming more fluid on his feet, and he comes at his opponents with a variety of kicks.

Ellenor is going to be a good test for Gallagher. He is also very good on the ground with six of his eight wins coming via submission. With both guys being well versed on the ground, we might see this fight stay standing. It’s a good chance for Gallagher to show off those skills.

In the end, I think this fight is probably going to go the distance. I really like Gallagher’s chances here to make it four in a row inside the Bellator cage. I think the fluidity and volume in his striking is going to play a key factor tomorrow night.

There are some solid fights tomorrow night for Bellator, but all eyes are going to be on the main event of the evening. I’m going with Gallagher, and I think it’ll potential setup a fight with a top contender to get him closer to the Bellator bantamweight title.