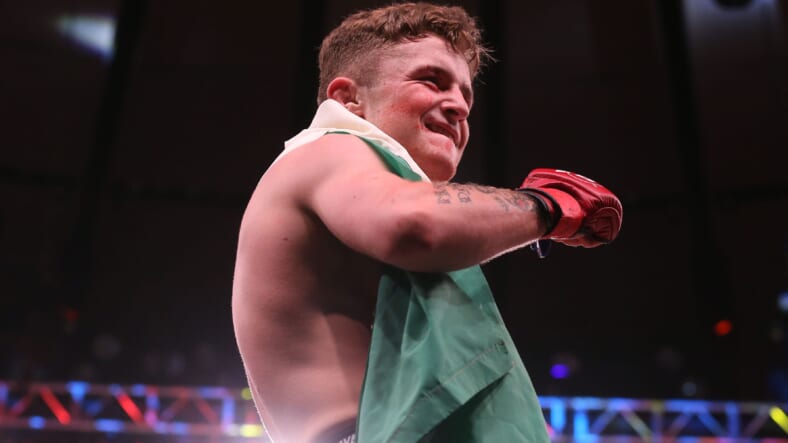 Tomorrow night, Bellator MMA is back in action for their ninth Europe event that is taking place in Milan, Italy. In the main event of the evening, you have a bantamweight contest between James Gallagher (10-1) and Callum Ellenor (8-2).

This is a big fight for Bellator‘s bantamweight division. Last month at Bellator 246, we saw the promotion crown a new bantamweight champion in Juan Archuleta (25-2). Sergio Pettis is likely going to get the next crack at him.

However, Gallagher might not be far behind. The brash Irish fighter is looking to make if four in a row inside the Bellator cage tomorrow night. Gallagher has only had one speedbump in his Bellator career thus far. That was his knockout loss to Ricky Bandejas.

Since that loss, Gallagher has rattled off three in a row. The Irishman is very slick on the ground with eight of his ten professional wins coming by submission. Gallagher is becoming more fluid on his feet, and he comes at his opponents with a variety of kicks.

Ellenor is going to be a good test for Gallagher. He is also very good on the ground with six of his eight wins coming via submission. With both guys being well versed on the ground, we might see this fight stay standing. It’s a good chance for Gallagher to show off those skills.

In the end, I think this fight is probably going to go the distance. I really like Gallagher’s chances here to make it four in a row inside the Bellator cage. I think the fluidity and volume in his striking is going to play a key factor tomorrow night.

There are some solid fights tomorrow night for Bellator, but all eyes are going to be on the main event of the evening. I’m going with Gallagher, and I think it’ll potential setup a fight with a top contender to get him closer to the Bellator bantamweight title.