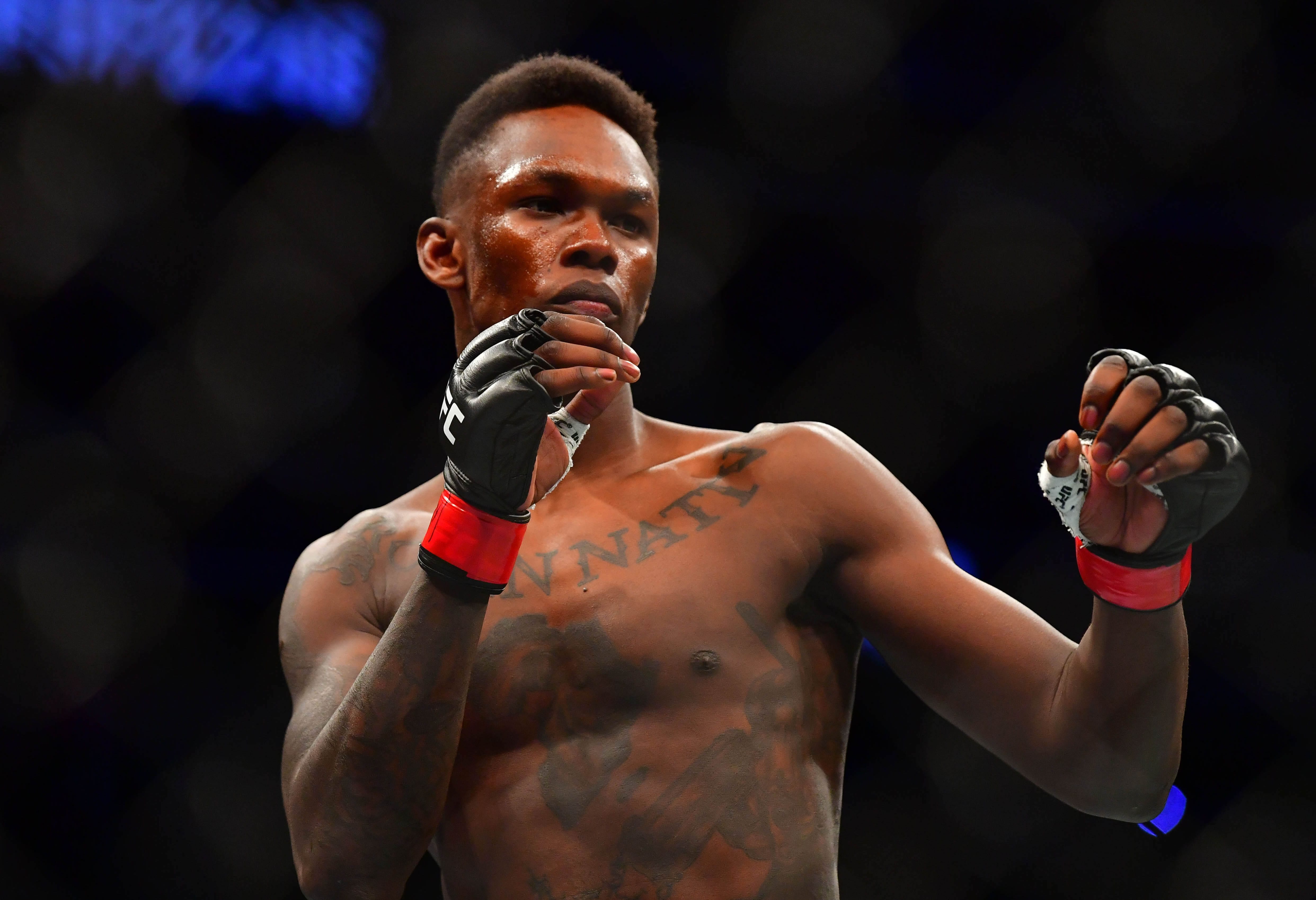 Tonight, the UFC returned to Fight Island to kick off a five week stint. The promotion was starting things out with a fight that Dana White was labeling as the potential fight of the year. UFC 253 was headlined by the middleweight title contest between Israel Adesanya (20-0) and Paulo Costa (13-1).

Fight Island got off to another good start for the UFC. Action was great from the prelims through the main card. Let’s take a dive into the fights from the main card of UFC 253.

In the main event of the evening, we had the highly anticipated UFC middleweight contest between Israel Adesanya and Paulo Costa. These two entered the octagon as unbeaten fighters both looking to show they were the best in the world.

As the main event of the evening got underway, Costa immediately took the center of the cage. Adesanya threw a big leg kick early that Costa waved on. Costa looked patient in the first minute of the fight as Adesanya kept landing leg kicks.

Costa landed a big leg kick of his own a minute into the fight. Adesanya was doing well early landing from the outside. Costa landed a massive body kick that Adesanya countered with a clean leg kick. A much more patient Paulo Costa in this one.

Adesanya continued to batter Costa’s lead leg. Halfway through the first, Costa waved Adesanya on with his hands down. Adesanya landed a clean jab followed by a leg kick. Costa tried to push forward with one his flurries, but Adesanya was no where to be found.

Adesanya continued to land brutal leg kicks and a big body kick. Costa smiled at everything that Adesanya would land. Both men were talking a lot to each other as the round ended. Clear first round for the champion.

As the second round started, Adesanya continued to pepper the lead leg. Costa seemed really tentative early on in the second round. Adesanya appeared to be snipping Costa every time Costa thought about coming in.

Costa landed two massive leg kicks to switch things up a minute in. Adesanya landed another big leg kick and a smooth jab behind it. Costa pushed forward but ate a leg kick and left hook from Adesanya. Adesanya went right back to work with leg kicks.

A massive headkick cut Costa and Adesanya went right back to kicking the legs. Costa wasn’t throwing his hands at all. A close quarters combination floors Costa. Adesanya follows with some big shots and it’s over. Adesanya proves that he’s the best in the world as he retains his UFC middleweight title.

When it was all said and done, @stylebender made it look easy 😏 #UFC253 pic.twitter.com/zeggYmdTXM

In the co-main event of the evening, Dominick Reyes (12-1) and Jan Blachowicz (26-8) went to war to determine who would be the new UFC light heavyweight champion. After Jon Jones vacated the title and left the division, the winner would be crowned the new UFC king of 205.

As the co-main event got underway, Blachowicz pushed forward with a calf kick. Reyes countered with a leg kick of his own. Both fighters were trading leg kicks early on. Reyes landed a body kick and two big lefts behind it.

Blachowicz just got out of the way of some big shots early on. Blachowicz was plotting forward and landed a big body kick. Reyes continued to look to score points from the outside. Both men appeared to be feeling the other out early on.

Reyes had a dark purple welt that was already forming around the ribs after some of Blachowicz’s kicks. Blachowicz was throwing with some serious power with everything early on. Close round, but I will give the first to Blachowicz with the damage.

Reyes pushed forward aggressively to start the second round. Blachowicz seemed really calm as he started pushing forward with power shots of his own. Reyes was light on his feet, but seemed really tentative after a big combination from Blachowicz.

Reyes did start to pick up the pace with about two minutes left in the round. Blachowicz kept pushing forward with massive combinations that appeared to hurt Reyes. Both men started trading massive shots and a massive shot drops Reyes.

Blachowicz follows up with a few big shots and it’s over. Jan Blachowicz is the new UFC light heavyweight champion of the world. A masterful performance from Jan Blachowicz who calls out Jon Jones after the fight.

The third fight of the UFC 253 main card featured a flyweight contest between Brandon Royval (12-4) and Kai Kara-France (21-9, 1 NC). After making a successful UFC debut back in May, Royval was trying to make it two in a row. Kara-France was also looking to make it two a row in the UFC following a loss to Brandon Moreno.

As the first round got underway, Royval opened with a headkick. Royval kept looking for a headkick early, but Kara-France dropped him with a right hand. Kara-France pushed forward and dropped Royval again. However, Royval dropped Kara-France coming in with a back fist.

Once they were back on their feet, Royval was pushing forward with headkicks and spinning attacks. Royval then dropped Kara-France with a big knee and looked for a guillotine. Kara-France was able to pop his head free and land on top. Royval used a sweep to get back to his feet.

A gassed Kara-France shot for a takedown, but landed right into a guillotine. It’s tight and Kara-France is forced to tap. A massive victory inside the UFC for Brandon Royval.

The second fight of the UFC 253 main card featured a women’s bantamweight contest between Ketlen Vieira (10-2) and Sijara Eubanks (6-5). Vieira was looking to bounce back from her first UFC loss while Eubanks was trying to win her third straight including two in the past two weeks.

As the first round started, Vieira pushed forward immediately and got into a clinch position. Eubanks did a good job of turning around Vieira and pressing her against the fence. The two separated after the brief clinch.

Halfway through the round, both ladies pushed forward and exchanged big shots in the pocket. Eubanks landed a good shot over the top, but Vieira countered nicely with a straight shot. Vieira really started finding her range late in round one. She also landed a takedown late which clinches round one for Vieira.

As the second round got underway, Vieira looked to continue to work off her jab. The two fighters came close in an exchange and Vieira used the close quarters to land a trip takedown. Eubanks worked back to the fence to try and use it to get up.

However, Vieira was doing a really good job of controlling Eubanks from the top. The referee decided to stand the fighters up with about half the round remaining. Eubanks tried to push forward with big shots.

Vieira was doing a very good job of catching Eubanks with clean shots on the exit. Eubanks landed a pretty nice side kick to the body and followed that up with a solid right hand. Vieira landed a pretty good 1-2. Less action in round two, but I give the round to Vieira.

Both fighters touched gloves as the final round started. Eubanks had a sense of urgency knowing she was down two rounds. Vieira was looking to work off her jab as Eubanks was pushing forward. Eubanks pushed forward and landed a big left hook which caused Vieira to look to clinch.

A big headkick landed for Eubanks and she followed it up with a big hook. Both of these ladies were trading serious leather in the third round. Vieira continued to really land some stiff jabs. Halfway through the final round, Eubanks did a good job coming over the top with a clean 1-2.

Again, both women landed big shots in close with about two minutes left. 90 second left in the round, and Eubanks lands a big shot to the body. Eubanks was doing much better in the third round. A late scramble found Eubanks on top at the end of the round.

I gave the final round to Eubanks, but the fight goes to Vieira on my scorecard. The judges scored the fight (29-28, 29-28, 29-28) for Ketlen Vieira. Vieira gets back in the win column inside the UFC after losing her first fight back in December.

Kicking off the UFC 253 main card was a featherweight contest between Hakeem Dawodu (12-1-1) and Zubaira Tukhugov (19-5-1). Tukhugov missed weight badly for this contest coming in at 150 pounds. Dawodu was looking to make it his fifth straight UFC victory.

As the first round started, Dawodu came forward with leg kicks. Both men seemed to be feeling the other out throughout the first minute of the fight. After the initial feeling out period, Tukhugov caught Dawodu with a clean left counter.

Two minutes into the first round, the action started to pick up a bit, but both men were still tentative. Dawodu kept throwing leg kicks, but wasn’t throwing much else. Tukhugov kept pushing forward with a few 1-2s.

A ton of respect was being shown by both men, but Tukhugov was getting the better of the exchanges early. Dawodu ripped a good body shot, but Tukhugov countered with some good shots. Slower first round that I lean towards Tukhugov.

As the second round started, both men looked a little more energetic. Dawodu opened with a spinning back kick and a nice leg kick. Tukhugov came forward with a shot from the outside, but Dawodu countered with a clean 1-2 on the exit.

Dawodu was doing a much better job of opening up in the second. Tukhugov then started finding a good amount of success with a counter left hook and uppercut combo. These two seemed content with just standing and trading in relatively close quarters.

With two minutes left in the round, both men threw everything into shots at the other. Tukhugov had a nice level change which he used to try to take Dawodu down, but Dawodu defended very well.

Dawodu was doing a better job of landing clean shots as the second round went on. However, with one minute left in the round, Tukhugov landed a nice takedown. Dawodu was getting the better of the striking, but with a takedown and minute of top control, I give the second to Tukhugov.

As the final round got underway, Tukhugov’s pace seemed to have slowed down. Dawodu kept looking for leg kicks from the outside. A minute into the round, Tukhugov landed a nice left and check left hook. However, Dawodu’s leg kicks were starting to add up on Tukhugov.

Two minutes in, Tukhugov shot forward for a couple of takedowns, but couldn’t land one. Dawodu landed a flush left hook which caused Tukhugov to shoot for another takedown. Dawodu was really starting to take over in the standup.

Tukhugov worked hard for a takedown, but he couldn’t land it. Tukhugov looked tired with about a minute and a half left. Dawodu landed a big shot to the body and followed that up with pointing to ground.

Tukhugov was gassing and Dawodu was really starting to show his swagger. Dawodu was putting his hands down and screaming at Tukhugov in the final minute. Clear final round for Dawodu, but I lean Tukhugov 29-28. In the end, the judges scored the fight (30-27, 29-28, 28-29) for Dawodu. A fifth straight UFC victory for Dawodu.