With James Paxton out until May/June, and Happ sliding in for Domingo German until his suspension is over, there’s an opening in the rotation for the next couple of months. Jordan Montgomery is the odds on favorite, but Luis Cessa and Johnathan Loaisiga have a distinct edge. That edge being… they aren’t coming back from Tommy John Surgery. Devi Garcia is also coming to camp for the first time and can make a legitimate claim for the spot, leapfrogging over the three veterans.

Rightfully, third base is Gio Urshela’s to lose. However, Miguel Andujar, who will be tried out at several other positions, will have a chance to take it back. His rehab for his labrum tear began in earnest in September and has more on his side than Urshela. Urshela has to prove that his subpar defensive statistics for 2019 were an anomaly and that his offensive output can be maintained throughout the 2020 campaign.

Until Aaron Hicks can come back from Tommy John surgery, the likely outfield configuration will be Aaron Judge, Brett Gardner, and Giancarlo Stanton. Countless Yankee fans want to see Clint Frazier given his opportunity, that his bat is worth the chance in the outfield. But if he can’t improve his defensive capabilities, why would the Yankees need him? Urshela and Andujar will see some time in the outfield, Tyler Wade can play outfield in a pinch, and you’ll have Stanton, Andujar, Voit, and Sanchez all seeing regular time in the DH slot. Where does Frazier fit in if his defense is just as sloppy as it was in 2019?

The Yankees have been STOCKPILING on backup catchers in the past few months. This is after Brian Cashman admitted that he’d be comfortable with Kyle Higashioka as the backup after Austin Romine left for the Detroit Tigers. You just signed 3 veteran catchers, all of whom could easily be backups for Gary Sanchez. If they REALLY were feeling comfortable with Higashioka at the backup role, you wouldn’t go out of your way to sign three catchers. I am seriously beginning to question if Higashioka will make it out of Tampa.

These are just some of the position battles to keep an eye on as Spring Training progresses. New York Yankees’ Masahiro Tanaka feels Astros cheated them out of World Series 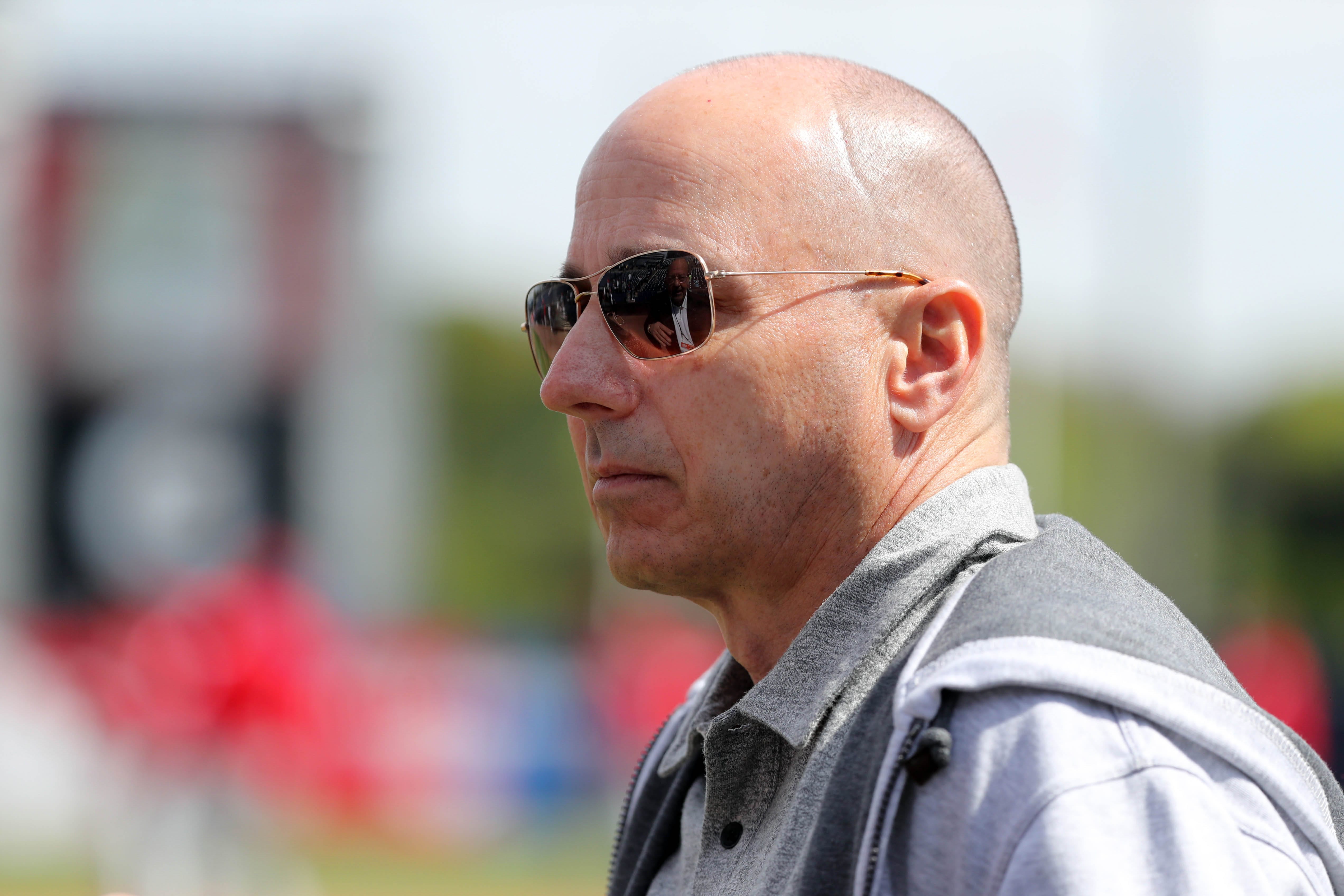 Rather than ad more payroll to the team, Brian Cashman and the New York Yankees are exploring bolstering the team via trade. If you want to get the big-name player, it’s gonna need to be a top-flight talent you’re trading. So let’s look at the Yankees best, worst, and meh trade options in threes (because everything good comes in threes).

These are the three players with the highest possible trade value the Yankees can offer.

Many are reporting (and begging) that the Yankees trade Miguel Andujar to make room for Gio. Except Gio has a helluva lot more going for him now than Miggy does. Urshela is coming off of a banner 2019, posting career bests in all offensive categories. The fact that he also struck out less than 100 times in a league where you’re either striking out or hitting home runs will only add to his value. Many teams are probably willing to look past the fact that Gio’s defense took a major slide last season if only he continues to swing a hot bat.

Utility men are in vogue right now in baseball. Tyler Wade is the Yankees’ answer to Ben Zobrist. Wade has logged time at 2nd, 3rd, shortstop, and all three outfield positions, making him valuable to just about any organization. With his biggest bugaboo being hitting, Wade turned it on last September, finishing 2019 with a .245 batting average, .692 OPS, 7 stolen bases (no caught stealing), as well as 2 home runs. Continuously bouncing between AAA and the Bronx, Wade might finally be able to blossom on a different team, while giving the Yankees the parting gift of a needed piece to the 2020 World Series championship.

I believe that the Yankees should have Garcia be in the pen as a long reliever/spot starter/opener. But he is our biggest touted prospect. While he’s a below .500 pitcher in the minors, he has an ERA of 3.37, with over 400 strikeouts across 293.2 innings pitched in the minors (these are his career minor league stats). He’s also only 20 years old. Teams are salivating for young, strikeout pitchers. Garcia could be the lynchpin in a blockbuster deal that deals with the Yankees’ next dynasty.

The Worst Trade Options for the Yankees

These are the Yankees with possibly the lowest trade value for the team.

I’ve written about how the Yankees would benefit from having Andujar and Urshela in the big club. And it’s largely since Andujar has to prove he’s back to form. Remember the last time a Yankee made a big splash in his first year with the club, the missed the season due to surgically repairing a torn labrum in his shoulder? I do. And his name was Greg Bird. Andujar has to show that he doesn’t repeat what Bird went through, that he can still hit big-league pitching, and if he can show his defense improved, then his trade value will be where it was at after finishing second to Shohei Ohtani in the ROY voting. If you trade him, it’s gotta be by the trade deadline in July.

Clint Frazier’s time in New York has been mired by both injury and mediocrity. The kid is a 25-year-old DH, limiting who you can trade him too. His defense is so shaky in the outfield, he’s making Andujar’s defense during 2018 Gold Glove-caliber. Think about it, Frazier’s career WAR is -0.4, career oWAR is 0.9, and career dWAR is -1.7. His career TZ is -18, and he’s about a full point behind league average for range as an outfielder. This kid needs a lot of fine-tuning in the minors. So much so, I doubt he’ll ever be a full-time MLB player.

Short of trading for some of the other top prospects/vets we have, these two would be the absolute worst we could trade. Why? Well… they’re just too good to give up! But to land someone like a Fransisco Lindor, we have to trade someone of the caliber of Severino or Torres.

Meh is based on the ideology of “They may land us someone good, but they’ll equally get us no one of value that we need.” The players aren’t too spectacular, or they have enough baggage that we’ll not be able to get someone off too special.

Happ had a lackluster year to say the very least. But, he’s a middle of the road pitcher who had, at best, a small handful of All-Star caliber years in-between. So There’s some value in having someone who had the success Happ had in his past, on top of his veteran status, it’s a 50/50 split on who, or what we’d be able to get for Happ’s $17 million contracts.

Any number of our top prospect pitchers

Devi Garcia is one of our best pitching options BECAUSE he’s a young, controllable, strike-throwing pitcher. But So was Justice Sheffield. And Justice Sheffield is, by this point in his young career, is an absolute dud in Seattle. Every single minor league prospect has the chance of being a future Hall of Famer, but most end up being a middling ballplayer. While Clint Frazier’s offensive capabilities can be viewed as above average, his completely lackluster defense makes him middling as an overall ballplayer.

DJ is a fantastic player, but he’s above the age of 30. All statistical analysis is saying “You can’t have a middle infielder playing who’s older than 30 because he can’t get to the ball as quickly.”

If we get a shortstop that ISN’T Gleyber Torres, and Gio Urshela and Miguel Andujar are healthy, AND Luke Voit and Mike Ford are healthy, what room do we truly have for DJ LeMaihieu on the club?