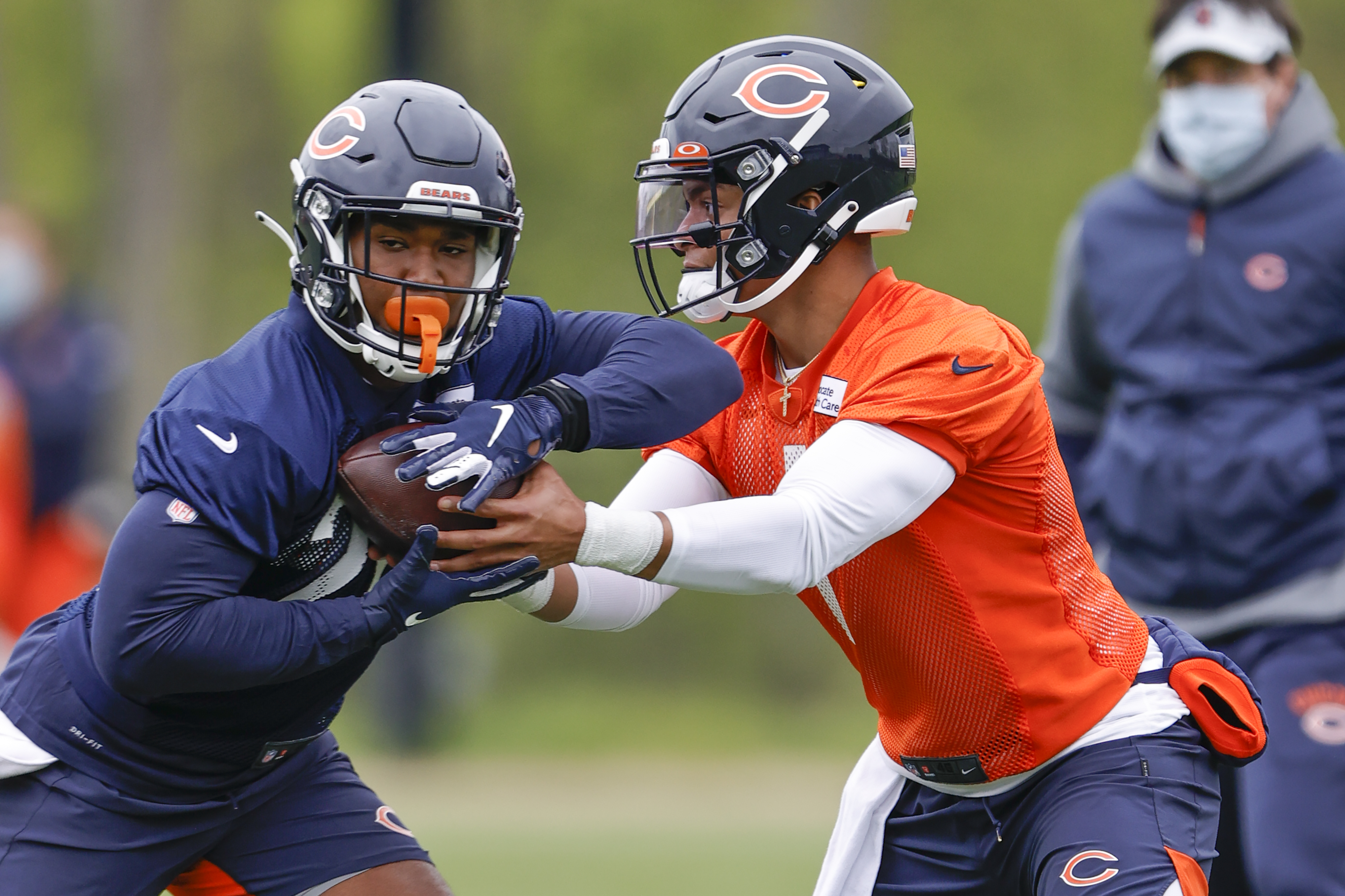 With the Chicago Bears opening the preseason up with a win over the Miami Dolphins, let’s recap some standouts and what to look forward to as the Bears prepare for the Buffalo Bills on Saturday, August 21st.

Any list recapping the Bears game would be foolish to not include Fields, who finished the game 14-for-20 with 142 passing yards, averaging 7.1 yards per attempt. Fields’ mobility kept the chains moving as the 11th overall pick scrambled five times for 33 yards, including a 21-yard run that was capped off by a touchdown to tight end Jesse James two plays later.

Fields may have started out slow but found his groove as the game progressed, which is good news for the Bears general manager Ryan Pace Pace and head coach Matt Nagy, who’ve invested the Bears’ future in Fields.

“It was actually kind of slow to me to be honest,” Fields said following the game. “I was expecting it to be a little bit faster but practicing, you know game speed, going at it with my teammates everyday, of course, you know we have a great defense. Me going against them everyday, it definitely slowed the game up a little bit for me. I felt comfortable out there.”

Fields showed enough promise to warrant being the week one starter. Don’t write off Andy Dalton but Fields performance was encouraging enough to warrant being given a serious chance with the first-team offense in training camp.

After going undrafted due to an ankle injury, it didn’t take long for Snowden to make an impression, despite playing just 22 percent of snaps yesterday. The former UVA product totaled two QB hits, one sack, and one TFL throughout the second half on Sunday. After Khalil Mack and Robert Quinn, the Bears have Trevis Gipson, Jeremiah Attaochu, and Snowden to complete the OLB room.

Snowden will need to continue stacking strong performances to have an opportunity to make Chicago’s final roster but he’d also be an ideal practice squad candidate to develop as a player who could eventually take over in 2022 as a starter or rotational player.

The Bears needed to add some juice on offense this offseason and Herbert provided plenty yesterday as a runner and receiver. Averaging 6.3 yards per carry and 3.7 yards per reception, Herbert showcased his ability to be a dual-threat running back. Despite being buried on the depth chart behind Damien Williams and David Montgomery, Herbert’s strong showing yesterday was more of an indication of what’s to come for the sixth-round pick.

Herbert’s strong performance bodes well for the Bears, who are uncertain about when running back Tarik Cohen, who is still recovering from a torn ACL suffered early last season, will return. Too much depth in the NFL is never bad and Herbert can make the Bears offense expendable by creating mismatches throughout games.

With uncertainty about who will be the starting slot CB, Shelley stepped up to the challenge on Saturday, putting together a performance that bodes well for his career moving forward. Entering his third season, Shelley spent 2019 and 2020 buried on the depth chart behind veterans Kyle Fuller and Buster Skrine, seeing limited regular season action.

Shelley’s preseason debut in year three saw him with six tackles and one PBU. With the Bears competition at slot receiver being wide open, the 2019 sixth-round pick will have the opportunity to seize the starting role if he can put together strong performances against the Buffalo Bills and Tennessee Titans.

Very rarely do veteran players steal the show in preseason but there’s an exception to every rule and in this case, it’s Ogletree. After stealing the show at training camp with six interceptions, despite being a late additon, Ogletree racked up four tackles, including one PBU and one TFL.

Bursting onto the scene after starting just one game for the New York Jets in 2020, Ogletree has quickly emerged as the front runner for MLB3, a title that many thought would originally go to veteran Christian Jones.

Believe it or not, the Bears had just two starters from last season present on the offensive line for Saturday’s contest: Sam Mustipher and Cody Whitehair. The rest of Chicago’s offensive line was injured, forcing the Bears to use a number of second, third, and fourth-string players.

Here’s a fun fact: Chicago allowed zero sacks on Saturday, a stat that will surprise many. Suddenly, offensive line coach Juan Castillo has instilled confidence into a unit that’s been ravaged by injuries, leading to questions about how good the OL can be when fully healthy. A unit that was solid in the running game yesterday was even better in pass protection. The question now remains: Can the OL keep this up until Teven Jenkins, James Daniels, and Germain Ifedi return?

One question for the offense

Will Fields strong performance yesterday make the Bears coaching staff second-guess who the starting quarteback should be on opening day? It’s too early to tell. Remember that Nagy did say Fields would receive a majority of the reps in the preseason, so the 11th overall pick playing about 63 percent of snaps was likely in the original gameplan.

The real QB competition will take place when Dalton receives a significant amount of reps against the Buffalo Bills. Chicago should give Fields the same amount of reps as Dalton, in order to truly see where both quarterbacks are at before making one final decision.

One question for the defense

Should we stop worrying about the status of DT Eddie Goldman, who opted out in 2020 due to COVID-19 concerns? Probably. Rookie DT Khyiris Tonga had a pretty solid outing yesterday, including a play where he penetrated the offensive line, leading to a goal line stand for the Bears defense.

To be clear, Tonga’s performance is encouraging but Goldman would still take the Bears defense to another level. Factor this in: Goldman hasn’t suited up in nearly 20 months, so there will likely be plenty of rust to shake off before Goldman returns to form.

Who’s not making this roster?

I’ll tell you this much and the answer is pretty obvious: WR Javon Wims. After three seasons where Wims has underperformed but then also been the center of confrontation, leading to tension with the coaching staff, Wims needs to get cut. The false start penalty on Fields first drive should be the final straw for the Bears coaching staff, who are simply wasting time and reps by keeping Wims around. Rather than keep Wims around, how about signing another young wide receiver to take his place, creating some more competition?

What’s next for the Bears?

Mitch Trubisky will be coming to town for week two, which means the boo birds were certainly be out in full effect the moment that Trubisky takes the field. The last time I even remember there being some serious booing at a Bears preseason game is when Jay Cutler returned to Denver in 2009 to take on his former team after being traded just four months earlier.

As Patrick Star says in an episode of Spongebob: “You had your chance and you failed.” The same applies for Trubisky, who’s return to Chicago will be a storyline that dominates that week.

Buffalo’s defense should provide the Bears with another test to see where Chicago’s offense is really at, especially if the Bears decide to give their first-team starters a significant amount of reps throughout the game. 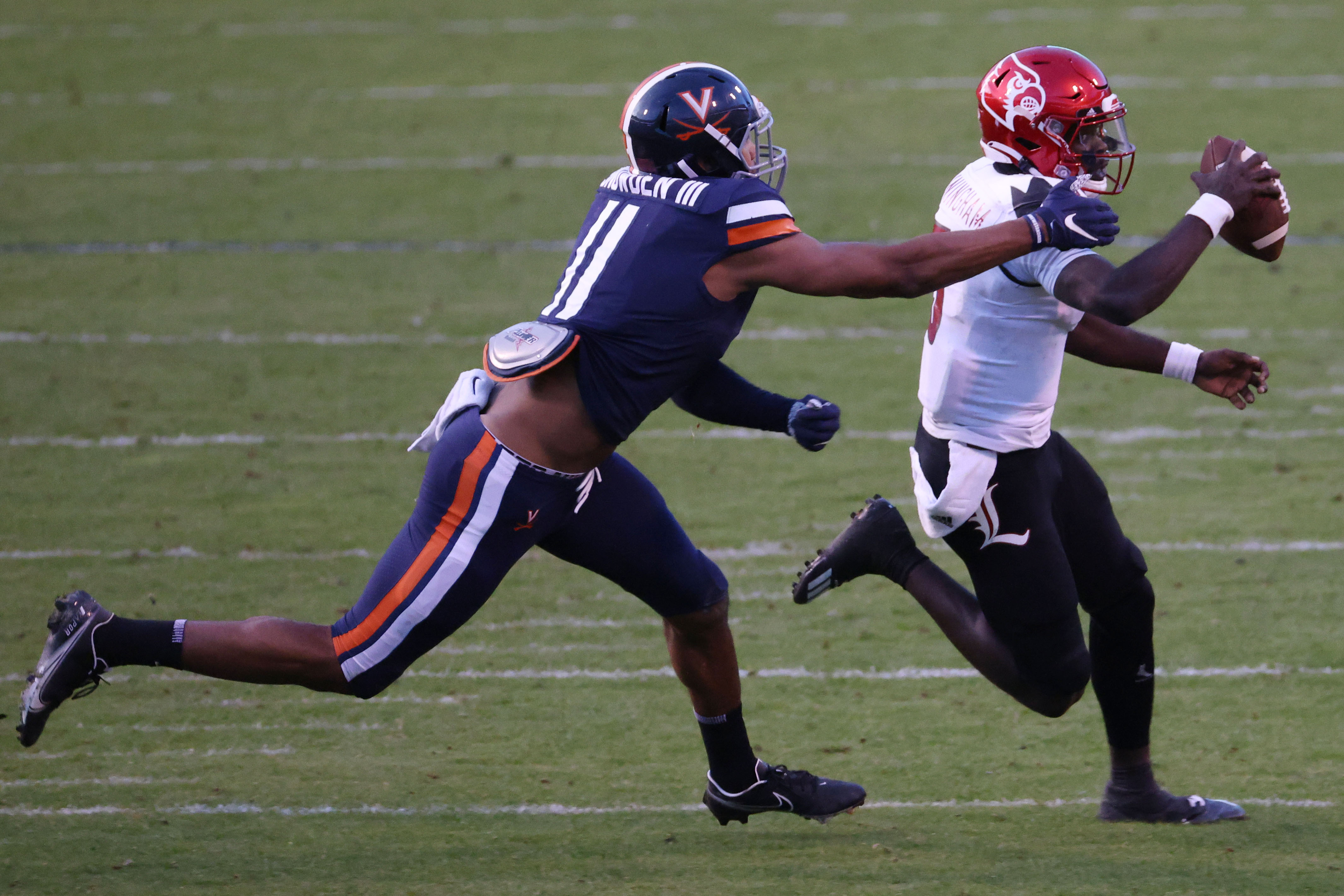 Following the conclusion of the 2021 NFL Draft, the Chicago Bears quickly added to the defense, signing undrafted free agent Charles Snowden. The 6-foot-6, 243-pound pass rusher spent the last four seasons with the Virginia Cavaliers where he racked up 191 total tackles, 30.5 tackles for loss, and 15 sacks.

By signing Snowden, Chicago will be adding to a pass rusher room that features Khalil Mack, Robert Quinn, Jeremiah Attaochu, Trevis Gipson, James Vaughters, and Ledarius Mack, the younger brother of three-time All-Pro Khalil Mack. The group may be headlined by the elder Mack and Quinn but Snowden has a nice chance to make the final roster or at least be stashed away on the practice squad in 2021 to prepare him for 2022.

Snowden’s skillset is much like former Bears first-round pick Leonard Floyd. Despite being on the taller side, Snowden doesn’t allow his height to hinder his mobility. This further allows him to be effective in either man or zone coverage, with his height allowing him to matchup against tight ends.

Snowden does need to continue adding muscle to his entire frame. This is especially important as when watching tape, there are times where he was unable to convert speed to power, something that many edge rushers thrive on in today’s NFL. More muscle would also allow him to continue imposing his will on offensive lineman.

What is Snowden’s Ceiling?

The Bears have an intriguing group of edge rushers, which means Snowden is on the outside looking in. It’s unfair to write off someone who does showcase potential and also had a highly productive college career but it’s hard to see Snowden beating out the likes of Gipson, Vaughters, and Attaochu.

A likely scenario is that Snowden showcases enough potential that the Bears place him on the practice squad. Chicago has done that with players such as Kerrith Whyte, Sam Mustipher, and Ryan Nall. Both Mustipher and Nall contributed to Chicago’s offense in 2020, with the former starting at center and the latter as a rotational running back and on special teams.

Snowden should experience a similar career path, either becoming a rotational pass rusher or starter. For 2021, expect the former Virginia product to be a practice squad player who eventually becomes a rotational pass rusher before earning a starting role in 2022. Many may not see it now, however, Chicago does appear that they’ve found a hidden gem with a player of Snowden’s caliber.