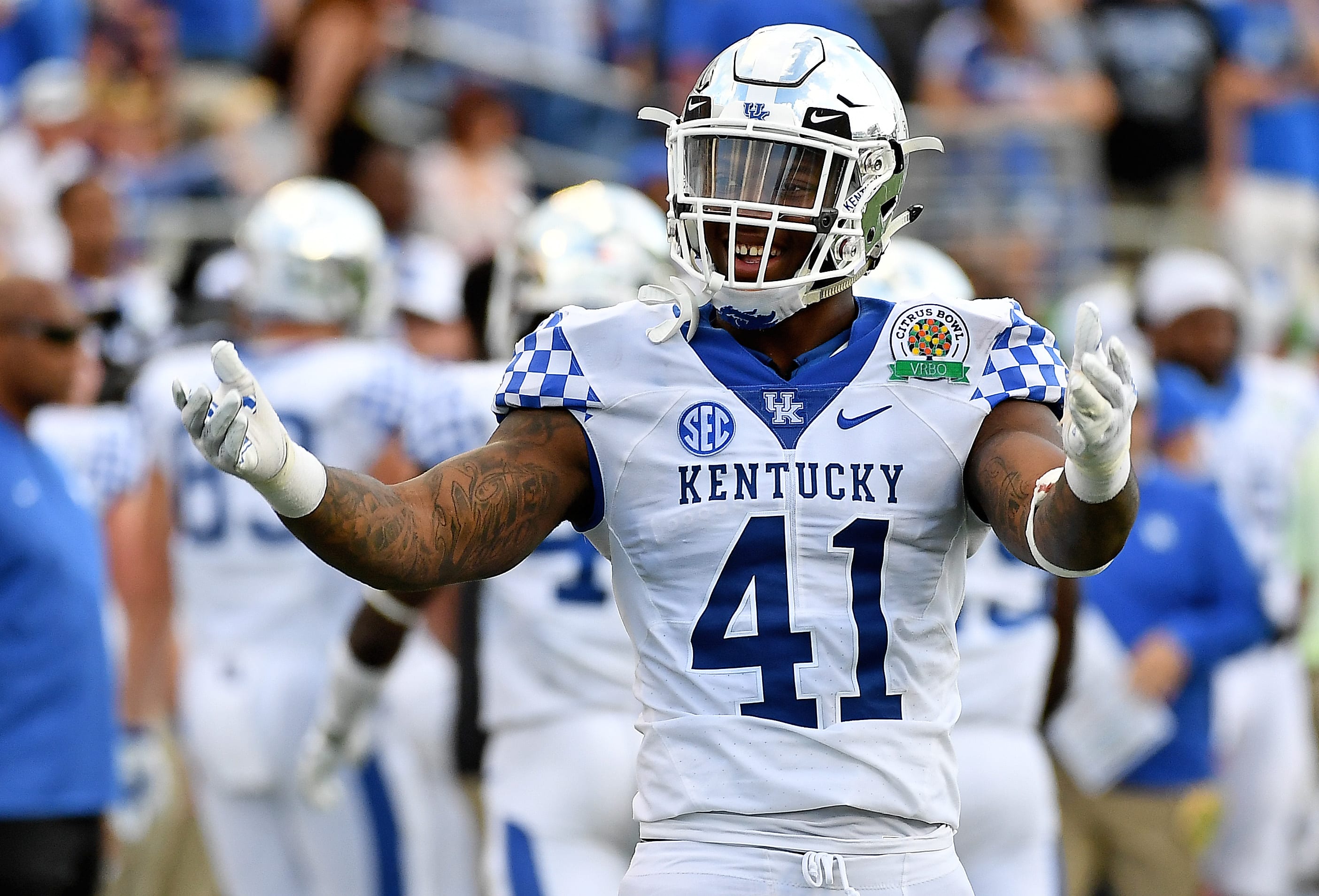 Finally, it is April 25, the 2019 NFL Draft begins tonight. It has been a long wait but we are finally here. This highly anticipated NFL Draft will be crucial for the New York Giants‘ and the New York Jets‘ futures.

Here is a final, 32-team 1st-round mock draft with trades, featuring the Jets and Giants both acquiring premium pass rushers and making trades.

Kyler Murray is the most talented quarterback in this draft class. After winning the Heisman in 2018 behind 54 total touchdowns and, 4,361 yards through the air, and an incredible 1,001 yards on the ground. He is the ultimate dual-threat quarterback. The Kliff Kingsbury and Kyler Murray connection is no joke. The Cardinals have been trying really hard to smokescreen their interest in Bosa in order to scare the 49ers into trading up one spot, but it will not happen. Murray is Kingsbury’s guy and the 49ers will not fall for it. I also predict that Josh Rosen will be traded during the draft.

Nick Bosa is the best pass rusher in this loaded defensive draft class. He has the potential to be a better player than his brother Joey, and he is a perfect fit with San Fransisco’s culture. The 49ers need a pass rusher and they will get the best one to come out in the past two years.

The Oakland Raiders have holes all over their defense and are in desperate need of a defensive superstar after trading away Khalil Mack. Rumor has it the Raiders will make a surprise move, however, with the best player in this year’s class on the board (Williams) I do not see the Raiders passing up on him.

The Bucs lost Kwon Alexander in free agency and have shown a lot of interest in Devin White. White is an impact player. A speedy linebacker who is effective in the run and pass. He will be a great piece in Tampa’s defense.

Dave Gettleman is reportedly “obsessed” with getting a pass-rusher with the 6th pick. Josh Allen falls to the 6th pick and he is an instant, run to the podium pick for the Giants. Edge rusher is possibly the Giants’ biggest need and Allen is the best pass-rusher available.

Josh Allen broke Kentucky’s single-season sack record in 2018 with 17 total sacks. Allen is solid against the run too, with a total of 88 tackles, including 21.5 tackles for loss.

The Jaguars just signed Nick Foles to a huge contract in free agency and need to protect him. Taylor is the top tackle on the board and the Jaguars have shown a lot of interest.

The Falcons have shown a lot of interest in Ed Oliver and reportedly are interested in trading up for him. If he manages to fall this far, the Falcons will make that move and get a great defensive playmaker on their interior.

The Falcons just traded ahead of the Bills and took the guy Buffalo wanted. I think the Bills will look to trade back here, but they will not find any takers. The Bills go with the best playmaker available in order to give young quarterback Josh Allen a true weapon on the outside. There may be concerns regarding his agility and route running, but his pure speed, strength, and size cannot be disputed.

The Broncos cut Brandon Marshall earlier this offseason and are likely to move on from Danny Trevathan soon, too. They have shown a lot of interest in this year’s linebacker class and Bush is the best linebacker available.

The Bengals are heavily interested in drafting a linebacker, but with the two best linebackers off the board, I predict they will trade back and accumulate more picks. Daniel Jones is Gettleman’s guy. I don’t see him forcing this pick at 6 but I do see him being aggressive enough to move up for Jones. The Cutcliffe and Manning connection that Jones has is clearly influencing Gettleman’s decision here as he tries to secure the Giants’ future franchise quarterback.

Hockenson is the best tight end in the draft and the Packers need to get Aaron Rodgers a tight end. Jimmy Graham is declining and has not shown great chemistry with Rodgers thus far. Getting a young, talented tight end in this offense will allow the Packers to reap the benefits.

The Houston Texans have one of the worst offensive lines in the league. They need to protect their young quarterback, Deshaun Watson. The Dolphins are in total rebuild mode and are hoping to stack future picks in order to find their quarterback in 2020. Jonah Williams is arguably the best offensive lineman in the draft class. He was impressive in pass-protection and as a run-blocker at Alabama. Whether he plays tackle or guard in the NFL remains to be seen, but the Texans could use an upgrade at both positions, so Williams is a perfect pick here.

After trading back with the Falcons, the Lions stack up on draft capital and turn their secondary into one of the league’s best, pairing this draft’s best corner with Darius Slay.

The Jets passed on an elite defender with the 3rd overall pick in favor of trading back to accumulate more picks. Now at 15, the Jets take the best defensive playmaker available at a position of need. Brian Burns out of FSU is a true speed rusher off the edge who will step in and make an instant impact.

Rashan Gary’s draft stock has taken a huge hit recently as many have questioned his lack of production in college. Recent reports indicate Gary also has a shoulder tear which is hurting his draft stock.

Noah Fant is an athletic, talented tight end out of Iowa. The Bengals missed out on the Dwayne Haskins sweepstakes, but that does not mean they can’t get some help for Andy Dalton. The Bengals have dealt with a lot of injuries at the tight end position and it is time to find the right guy to replace the Tylers for the long term.

The Vikings offensive line has been their weakness for a couple of years now, and Kirk Cousins needs some protection up front. Cody Ford did a phenomenal job at Oklahoma blocking for great quarterbacks like Baker Mayfield and Kyler Murray. He might play guard in the pros, but like the Texans, the Vikings can use help all over the offensive line.

Another edge defender who has suffered a recent fall in draft stock is Montez Sweat. Sweat lit up the 2019 NFL Combine, but, unfortunately, it was recently discovered that Montez has a heart condition. This discovery has hurt his draft stock, however, the Titans are searching for an edge rusher and Sweat is talented enough to be picked in the top 20.

The Steelers are thin at cornerback, with their best player at that position being a 30-year old Joe Haden. Murphy is arguably the best cornerback in this draft class, and he fills a big need for Pittsburgh.

Ferrell is a player that used to get some top-10 buzz, however, his stock has recently evened out in the mid teens to twenties. The Seahawks just traded away Frank Clark to the Chiefs opening up a hole on the edge. Ferrell will be a nice fit in Seattle’s defense.

There might be some questions regarding Harry’s speed, however, a big possession receiver might be exactly what the Ravens need. Lamar Jackson needs a true number one wide receiver, and the Ravens will find one for him in this draft.

The Dolphins traded back in order to accumulate more draft picks, but they still get an extremely talented player with the 23rd pick in Christian Wilkins. The Dolphins have not been able to find a solid replacement for Ndamukong Suh– until now.

Marshawn Lynch officially retired this week and the Raiders have shown a lot of interest in Josh Jacobs. Jacobs was a productive back for Alabama and will be a great fit in Oakland’s backfield.

Adderley is a quick free safety with good range and the ability to cover deep. The Eagles already have a box safety with Malcolm Jenkins, but this could be a great pairing for Philadelphia.

The Colts demonstrated their need for an interior defensive lineman in the playoffs, letting Chiefs running back Damien Williams rush for 129 yards and a touchdown against them. Jerry Tillery is an underrated prospect who will help the Colts sure up their interior.

The Raiders passed on an edge rusher with the 4th pick, but they will definitely look to get one with one of their three 1st-round picks. Winovich was the more productive of the two Michigan edge rushers and is a sleeper player who could slip into the 1st round.

The Chargers’ offensive line got beat up in the playoffs against the Patriots. They need an upgrade on the offensive line and tackle Andre Dillard should step in and be an immediate improvement.

Somehow, due to team needs, Drew Lock falls all the way to the 29th pick. The Seahawks have reportedly been interested in trading back and the Broncos have been interested in Lock for a while. I predict the Broncos will get aggressive and trade up for the falling quarterback prospect. Lock’s fall could be reminiscent of Aaron Rodgers’s.

Adrian Amos was an excellent pickup for Green Bay in free agency, but he will play more of a coverage role in the Packers’ defense. Opposite of Amos, the Packers could draft Johnathan Abrams to be a box safety and aid in run support.

The Rams need a pass-rusher, but they are too wise to reach on one here. Instead, they end up with one of the best cornerbacks in the draft class with DeAndre Baker. Baker would be a great fit with the Rams as they try to add some talented, youthful to their secondary.

Simmons is a risky prospect. To start, he suffered a torn ACL this offseason and might miss the entire 2019 season. On top of that, he has a red flag with a 2016 assault incident in which Simmons hit a woman. Simmons is one of the most talented players in the draft, but his off the field issues will cause him to fall. There is no better team to fix off the field issues than the New England Patriots. Bill Billechick will solve Simmons’ problems and make sure they never occur again.

Those are my predictions for the 1st round of the 2019 NFL Draft. Feel free to debate this mock with me on Twitter: @anthonyrivardo7.