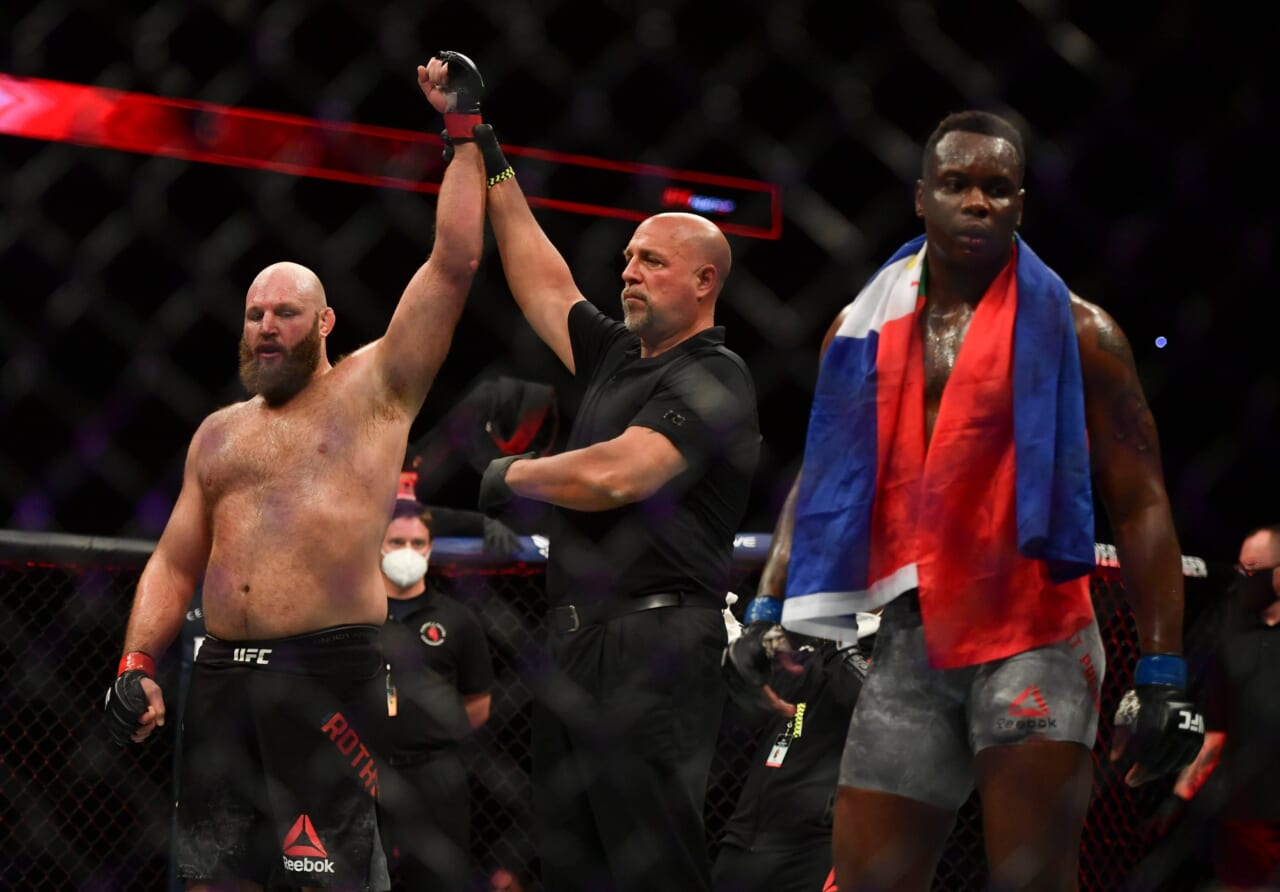 Tomorrow night in the featured of prelim of UFC Vegas 26, we will see a heavyweight showdown. Veteran Ben Rothwell (38-13) is taking on former PFL heavyweight champion Philipe Lins (14-5).

It seems crazy to think about, but Ben Rothwell has been with the UFC since 2009. He made his debut against Cain Velasquez and ultimately got stopped in that fight. While he’s never become the champion, Rothwell has put together a solid career.

If you think of some of the best heavyweights over the last decade, Rothwell ahs probably been in there with them. His best two octagon wins are over Alistair Overeem and Josh Barnett. We last saw him in October where he dropped a decision to Marcin Tybura.

That fight snapped a two-fight win streak. Rothwell will look to bounce back against another fighter who is in desperate need of a victory. Philipe Lins came into the UFC with a good amount of hype.

Lins looked like a world beater in PFL when he won the heavyweight title in 2018. However, after not competing in 2019, Lins joined the UFC in 2020. Last year he was completely underwhelming going 0-2 and getting starched by Tanner Boser in his last fight in June.

If I was a betting man, I would stay away from this UFC Vegas 26 matchup. I honestly don’t even know how to really predict this fight because I truly don’t know what to expect from Philipe Lins.

Lins ran through the competition in PFL and went 4-0 with four stoppages to capture the heavyweight title. However, if you take out those fights and just look at the Bellator and UFC appearances, he’s 0-4 and he’s been stopped three times.

Maybe it says something about the 2018 PFL heavyweights. With Ben Rothwell, I know what I’m going to get. The UFC veteran is going to come forward and put out a decent output.

He’s got pretty good power and very good chokes. Ultimately, I can’t pick Philipe Lins in this one. I think Rothwell is going to get it done and ultimately this will be the last time we see Lins inside the octagon.

Prediction: Ben Rothwell by TKO – Round 2

UFC Vegas 21 has lost one of it’s main card fights for this Saturday night. First reported by Fightful, the heavyweight clash between Ben Rothwell (38-13) and Philipe Lins (14-5) has been called off. The initial report has since been confirmed.

This was going to be a very interesting matchup in the UFC‘s heavyweight division. Philipe Lins had a lot of momentum when he signed with the promotion. When Lins signed his contract with the UFC, he was coming off of being the PFL heavyweight champion in 2018.

Lins took a year and a half to make his debut and it wasn’t smooth sailing. Lins fought twice in 2020 losing both matchups to Andrei Arlovski and Tanner Boser. Given the way the UFC is doing business lately, Lins might be fighting for his job in this matchup.

Back in 2016, Ben Rothwell looked like he was on a run to the title. Rothwell had won four fights in a row and was taking on former heavyweight champion, Junior Dos Santos. JDS outstruck Rothwell over five rounds to pick up a decision.

A suspension hit Rothwell after that fight and he wouldn’t fight again for another three years. The heavyweight returned in May of 2019. Since making his return, Rothwell has gone 2-3. However, he’s 2-1 in his last three fights.

At this time, the current plan is for the UFC to rebook this fight for a later date. There is no word on what date that might be, but the promotion is planning on keeping these two heavyweights paired up.

With the heavyweight fight off, UFC Vegas 21 is down to 13 fights. However, despite losing the heavyweight clash, the card still looks really good. Of course, the talk is all centered around the return of Leon Edwards (18-3).

Edwards if finally getting back into the octagon after a lengthy layoff. Belal Muhammad (18-3) has stepped up on short notice to welcome Edwards back to the UFC. This should be a fantastic matchup and it will tell us a lot about both contenders. Saturday night should still provide a lot of great action.