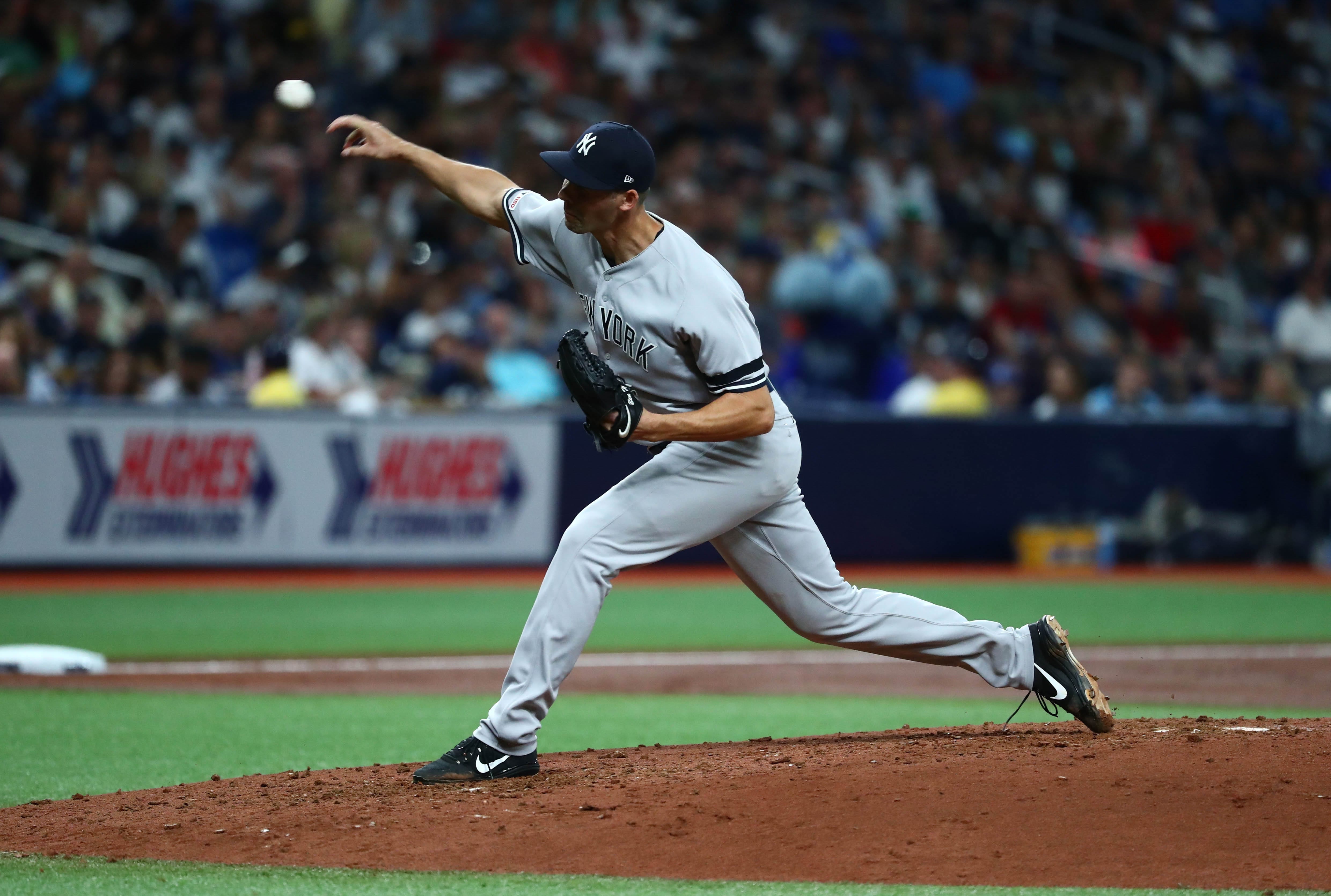 The New York Yankees announced on Wednesday that they have officially signed Darren O’Day to a one-year, $2.45 million deal. O’Day also has a player option for the 2022 season. Both sides verbally agreed to a deal on January 27th, as reported by Lindsey Adler.

O’Day, 38, is known for his sinker and his unique side-arm delivery. A 13-year veteran, O’Day was undrafted out of college and made his MLB debut in 2008 with the Los Angeles Angels. That off-season, the New York Mets selected him in the Rule 5 draft and would pitch just four games in Queens before being placed on waivers. The Texas Rangers picked him up shortly after and he pitched to 1.84 and 2.03 ERAs in his first two seasons in The Lone Star State.

However, his third season with the Rangers saw struggles, and he was once again placed on waivers following the 2011 season. The Baltimore Orioles snagged O’Day and had great success with the organization. Each of his first four seasons in Baltimore saw O’Day with ERAs under 2.30, even adding an all-star selection to his name. O’Day remained an Oriole well into 2018, but a trade deadline deal that season sent him to the Atlanta Braves. O’Day remained with the Braves through the 2020 season.

To make room for O’Day, the Yankees DFA’d reliever Ben Heller. Drafted by the Cleveland Indians in the 22nd round of the 2013 MLB draft, Heller was traded to the Yankees in the 2016 blockbuster involving Andrew Miller. In 31 MLB games, Heller has a 2.59 ERA and a 1.340 WHIP.

If Heller clears waivers, the Yankees can re-sign him to a minor-league deal. Otherwise, he’s fully available for any other team to pick him up. 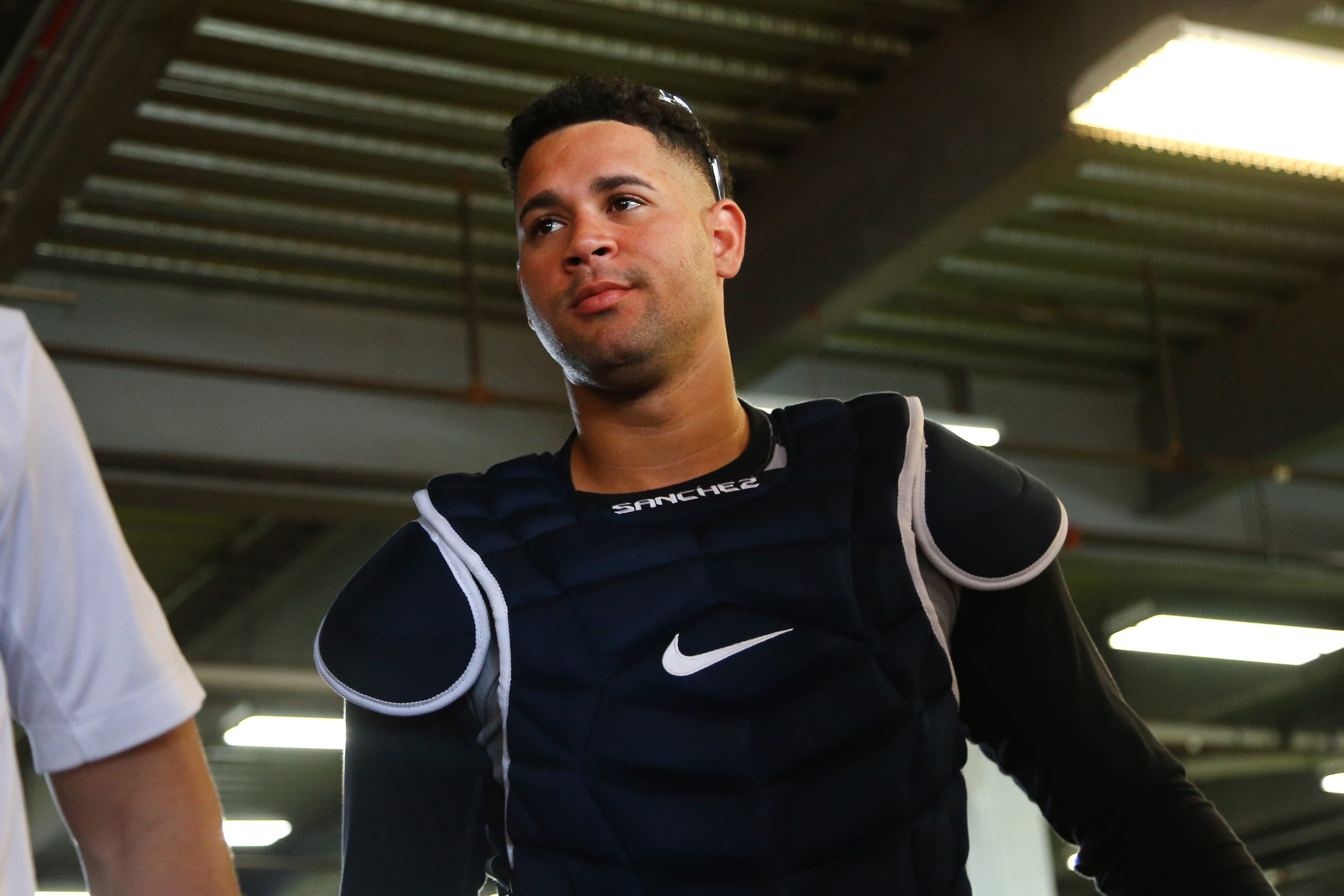 For the New York Yankees and the other 29 MLB teams, they have until 8 pm tonight to tender contracts to players of they become free agents and tentatively out of pinstripes forever. Don’t worry, Clint Frazier, Chad Green, Aaron Judge, Jordan Montgomery, Gleyber Torres, Gio Urshela, and Luke Voit aren’t going anywhere. These eight players are too important to the Yankees, and their arbitration salaries are all bargains by major league standards.

However, four Yankees could be gone by tonight. They are Gary Sanchez, Luis Cessa, Ben Heller, and Jonathan Holder. Cessa and Holder will most likely be tendered a contract.

Luis Cessa is often an unrated arm in the bullpen, but nevertheless, Cessa in the last five years with the Yankees has been a workhorse, starting, providing mid relief, and even saving games. The usually reliable Cessa had his best year in 2019, pitching in 47 games and closing out 14 of them with one save. Although his 2020 performance was not up to those figures, he was called to the mound 16 times, closing out 6 of them with one save, while registering his best ERA of 3.32. Cessa will be a keeper.

Jonathan Holder, like Cessa, has also been kicking around for five years and has been mostly solid for the Yankees. Holder was important to the Yankees this past season going 3-0 in 18 games in a 60 game season. Holder is durable and will most likely be tendered.

Ben Heller is another story. Heller is injury prone and hasn’t been much help to the New York Yankees. In his seven years with the Yankees, four in the majors, even though he has one of the lowest career ERA on has 2 wins to he credit. A low ERA doesn’t help much if you can’t stay on the mound. He will likely be non-tendered and be out of pinstripes.

Gary Sanchez is still another story. Whether you believe the possible trade hype from Cashman and Boone recently, or you believed the Yankees’ actions late last season and in the postseason, will determine if Sanchez remains a Yankee. Both manager Boone and Brian Cashman have recently praised Sanchez for his talent and potential to be on the edge of a star player. The question is whether they truly have faith in him or if they were trying to raise his trade value.

Sometimes actions speak louder than words. Last season was Sanchez’s worst season with the Yankees. He hit only .147 and had another season of failing to block the ball. He was so bad that Boone that does not believe in personal catchers allowed Kyle Higasioka to become ace Gerrit Cole’s personal catcher. Near the end of the season took a greater role in catching starts as Sanchez was sat down, even in the postseason. However, I believe that he will be in pinstripes next year, even if it’s only because he is an economical option in a season that the Yankees will be penny-pinching.

The New York Yankees bullpen is one of the premier bullpens in baseball. With the Yankees losing one of their best relievers in their history in Dellin Betances leave and not doing much to replace him, it seems like a spot for an in-house option. For me, the most popular choices are Jonathon Loaisiga and Deivi Garcia for the spot of a right-handed option out of the bullpen. Sure they are good picks, but I think the Yankees should try to invest innings in the hard-throwing Ben Heller in 2020.

Ben Heller has a fastball that always is in the mid to high 90s which is more common now in 2020 than it was in 2000 but is still pretty good. He also sports a curveball, changeup, and a slider that are promising. His short stints make his results to inconsistent to even look at. What I can look at however is the metrics of the pitch, not the result to see if there is any potential.

Ben Heller is able to garner a high Whiff% on his pitches, and though they had not always resulted in strikeouts, Heller’s short career makes said results hard to use. A high Whiff% on his breaking pitches shows promise, and his fastball averaging 94 and 96 MPH and a sinker at 93 MPH, he shows that his arm is pretty good and that he can power some pitches if need be. With his ability to crank up the heat and generate swings and misses, if given 30 innings he can be VERY good and possibly even one of our better relievers.

The Yankees have done a great job historically of having in-house relief options as of late. Ben Heller is in an organization that shows they have MiLB coaches who can help youngsters and veterans, such as Chad Green and Tommy Kahnle resurging after struggles. The New York Yankees also brought in the analytically advanced pitching coach in Matt Blake, so I believe he’s in the right organization to grow.

If he can be healthy in a shortened season I could see Ben Heller have a solid stat line and continue to grow in later years. His numbers with his stuff could look like this:

Why do I have his peripherals better than his actual numbers? I believe that Heller still needs more time to truly become a really good reliever, but he will still experience success that will lead to a big step in 2020.

As the season progresses, the New York Yankees players are finally coming off the injured list. Key players Didi Gregorius and Aaron Hicks have already made their return. Bomber’s sluggers Giancarlo Stanton is returning Tuesday against the Rays and Aaron Judge is expected to return later this week.

As the injury bug seems to be disappearing, there are Yankees players that are still suffering:

Yankees’ ace Luis Severino (lat) will not return until after the All-Star break. However, Severino is expected to start throwing from a mound next week.

Dellin Betances (shoulder) has said that he is still dealing with discomfort and is not sure when he will resume throwing. It would not be a surprise if Yankee fans see Betances make his return after the All-Star break as well.

Domingo German (hip) was making a huge impact on the Yankees’ so-far successful season holding a 9-2 record when he suffered his injury. German said his hip has been improving and is becoming more mobile. He began throwing on flat ground, however, there is no timetable for his return yet.

Troy Tulowitzki (calf) was making progress when he suffered another setback. Tulowitzki was pulled from his rehab game in high-A Tampa a few weeks ago and there have been no updates since. Manager Aaron Boone met with media today and said that he has nothing to say on Tulowitzki’s progress.

These four Yankees will not see the field for some time. Big Yankee names Bird (foot) and Ellsbury (foot) are expected to not return until early to mid-August.