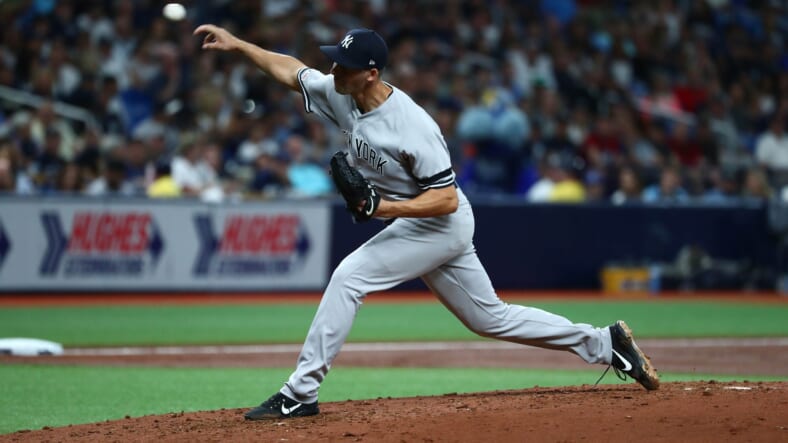 The New York Yankees announced on Wednesday that they have officially signed Darren O’Day to a one-year, $2.45 million deal. O’Day also has a player option for the 2022 season. Both sides verbally agreed to a deal on January 27th, as reported by Lindsey Adler.

O’Day, 38, is known for his sinker and his unique side-arm delivery. A 13-year veteran, O’Day was undrafted out of college and made his MLB debut in 2008 with the Los Angeles Angels. That off-season, the New York Mets selected him in the Rule 5 draft and would pitch just four games in Queens before being placed on waivers. The Texas Rangers picked him up shortly after and he pitched to 1.84 and 2.03 ERAs in his first two seasons in The Lone Star State.

However, his third season with the Rangers saw struggles, and he was once again placed on waivers following the 2011 season. The Baltimore Orioles snagged O’Day and had great success with the organization. Each of his first four seasons in Baltimore saw O’Day with ERAs under 2.30, even adding an all-star selection to his name. O’Day remained an Oriole well into 2018, but a trade deadline deal that season sent him to the Atlanta Braves. O’Day remained with the Braves through the 2020 season.

To make room for O’Day, the Yankees DFA’d reliever Ben Heller. Drafted by the Cleveland Indians in the 22nd round of the 2013 MLB draft, Heller was traded to the Yankees in the 2016 blockbuster involving Andrew Miller.Â In 31 MLB games, Heller has a 2.59 ERA and a 1.340 WHIP.

If Heller clears waivers, the Yankees can re-sign him to a minor-league deal. Otherwise, he’s fully available for any other team to pick him up.