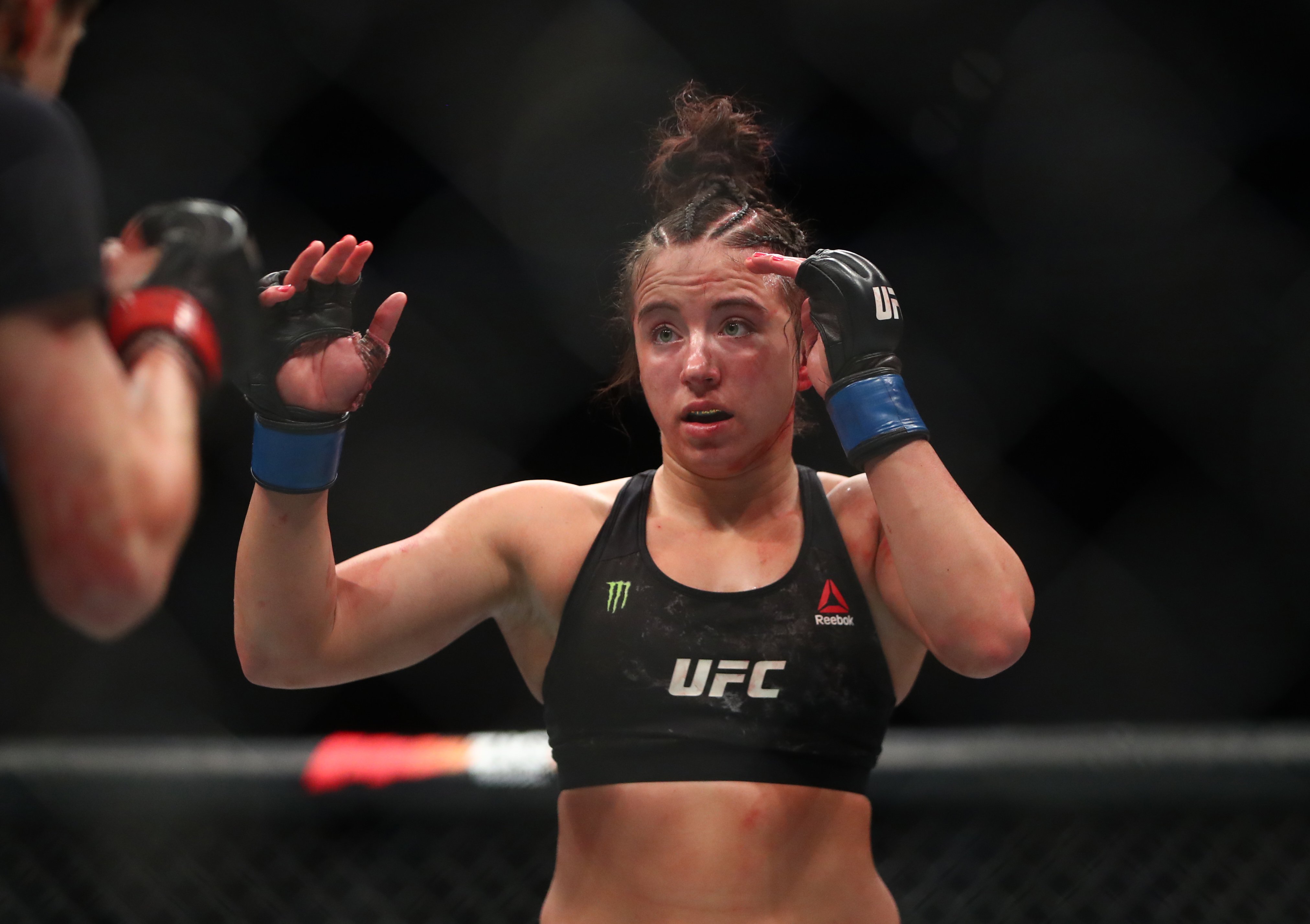 This past Saturday at UFC 258, Maycee Barber (8-2) made her return in the co-main event of the evening. Arguably the promotion’s top female prospect had a tough test in front of her in Alexa Grasso (13-3).

Barber was being built up as the future just like her nickname would suggest. Maycee Barber is ferocious when she’s on and she’s always looking for a finish. She drew some criticism when she made the bullish claim that she’d be the youngest champion in UFC history.

However, those plans were derailed in 2020 with a loss and a knee injury. There was a lot of hype behind this matchup which is why is was the co-main event of the evening. However, this fight didn’t go as Barber planned.

From the opening bell, Barber looked hesitant to get on the inside. She was throwing a lot of feints, but they were from very far away. It was all pretty much wasted movement and when she did come in to engage, Grasso was tagging her.

The first two rounds were very one-sided for Alexa Grasso at UFC 258. In the third round, we saw some glimpses of that promise from Barber. She was ferocious in trying to get a finish, but it was a little too late and she ultimately lost her second straight by decision.

It’s important to remember that Maycee Barber is just 22 years old. She has plenty of time to regroup despite back-to-back losses in the UFC. The promotion has a few options for her in her next fight.

If they want to give her a ranked opponent, the promotion could look at someone like Andrea Lee (11-5). It wasn’t long ago that Andrea Lee was looked at as a title contender. However, she’s now lost three in a row which finds her 12th in the UFC’s flyweight division.

If they want to give her someone outside the rankings, another option could be Ariane Lipski (13-6). Lipski is on the fringe of the top 15, but she just got finished by Antonina Shevchenko. Lipski would be a solid test for Barber in a fight she should be favored in.

The UFC should give her a decent opponent in her next fight. She has a ton of potential, but just because she’s lost two straight doesn’t mean she should get a layup. I think either of these matchups would be good for Maycee Barber. 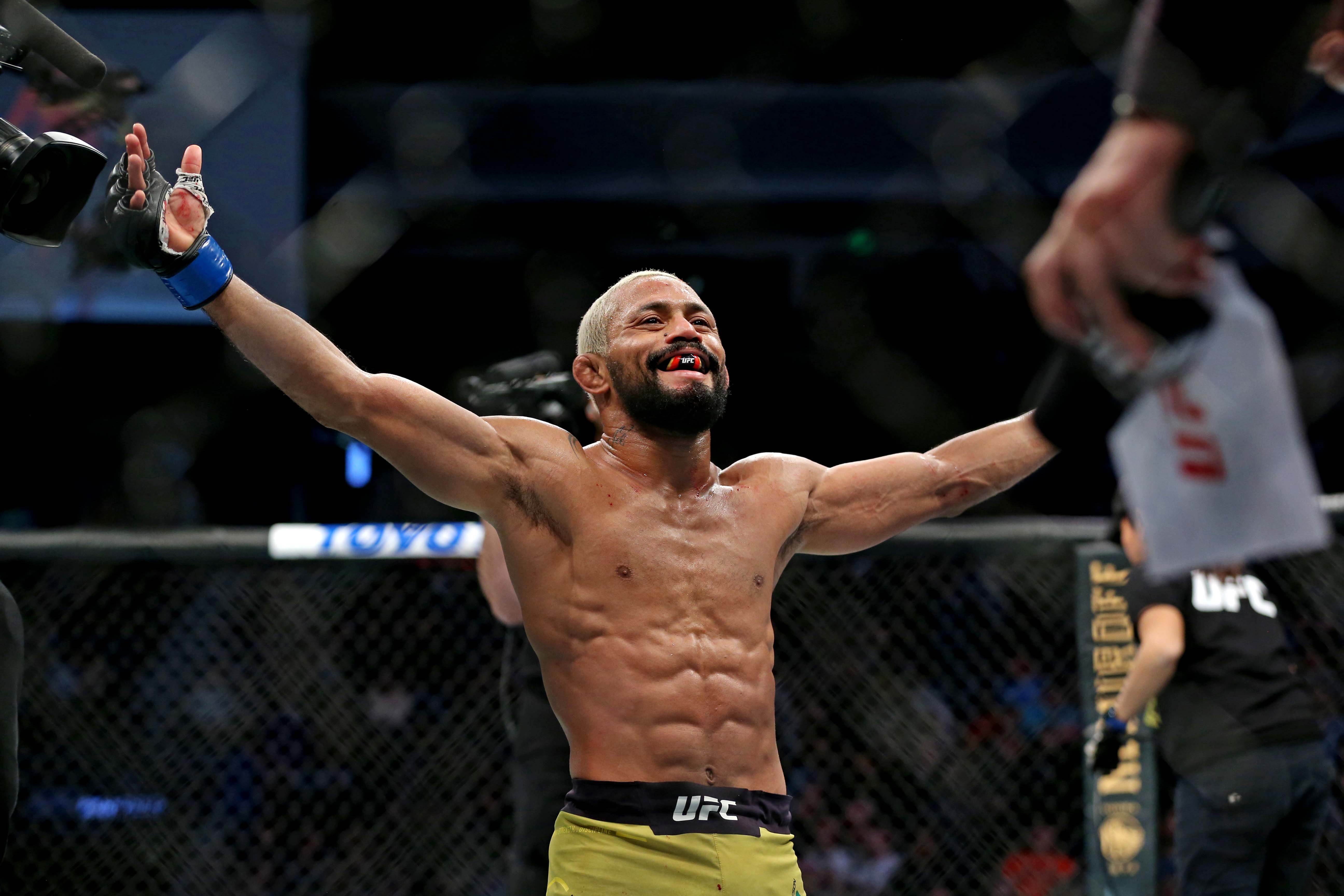 The UFC will be hosting their third event from Fight Island tomorrow night. In the main event, the vacant flyweight title is on the line between Deiveson Figueiredo (18-1) and Joseph Benavidez (28-6). Let’s dive into the main card and break it down.

Deiveson Figueiredo vs Joseph Benavidez for the UFC flyweight title

The main event of the evening will crown a new UFC flyweight champion (we think). This is take two between Figueiredo and Benavidez.

The two men fought in February for the vacant title, but due to Figueiredo missing weight, only Benavidez could have walked away champion. Figueiredo won that fight by second round knockout.

Benavidez has had one of the better careers for a fighter to have never won UFC gold. If you look at his resume, his losses have only come against the highest levels of competition. He even has a win over “Triple C” Henry Cejudo on his resume.

Benavidez has great speed, great chokes, good wrestling, and puts a pace on guys. He’s incredibly fun to watch, but he also is very hittable.

In the first fight between these two, Benavidez took some really good shots in the first round from Figueiredo. In the second round, an accidental headbutt opened a massive gash which distracted Benavidez. Shortly after he was looking up at the lights.

Figueiredo won the fight convincingly, but again, due to missing weight he didn’t walk out with the UFC title. He believes that he’s an uncrowned champion.

Figueiredo is the best flyweight in the UFC right now in my opinion. He’s extremely long for the division, and he has very good power. He’s really good wherever the fight goes to be honest.

Figueiredo’s biggest problem is and will always be his weight. He is a very big guy for this division. The biggest question is, will Figueiredo make weight?

If he makes weight, I think he’s going to walk out of Fight Island a champion. While Benavidez is really good and I think there’s desperation because this will be his last title shot, I just think Figueiredo is better.

Benavidez’s only path to victory is if Figueiredo completely gasses before the third round leading to a Benavidez decision. I think Figueiredo wins this one the exact same way he won the first fight.

Prediction: Deiveson Figueiredo by TKO – Round 2

In the co-main event of the evening. UFC middleweights Kelvin Gastelum (15-5, 1 NC) and Jack Hermansson (20-5) are expected to deliver an action packed fight.

Gastelum comes into this fight on a two fight losing streak, but he’s faced the best in the division. He went to war with the current champion, Israel Adesanya, and actually had some really bright spots in that fight.

Gastelum has very good speed and very crisp boxing for this division. In reality, Gastelum should be a welterweight, but he’s never shown the discipline to make the weight. For that reason, he’s undersized, but he does use to that to an advantage with speed.

If this fight is 100% contested in stand up range, you have to feel good about Gastelum’s chances. He’s got really good speed, and he possesses the power to put someone to sleep.

Jack Hermansson is just an awkward fighter. He has effective stand up, but he’s at his best whenever he can clinch up his opponents and take the fight to the ground.

Hermansson looked like he was just one win away in his last fight from a title shot, but he was stopped in the second round by Jared Cannonier.

Hermansson’s path to victory in this one is going to be to try to clinch, tire out, and takedown Kelvin Gastelum. If he’s able to make this a dirty fight, he’s got the clear advantage in my opinion.

I see two outcomes in this one. The first has the fight completely staying in striking range where Gastelum finishes the fight. The other is Gastelum has his moments, but Hermansson is able to lean on him/take him down enough to get a decision.

Ultimately, I’m leaning towards the second one right now. I think Hermansson is going to do a fantastic job of using his size and strength in this one. Now, don’t be shocked if Gastelum catches Hermansson coming in with something big. However, I think Hermansson will be able to do just enough to squeak out a win here.

If you’re looking for a fight on the card where the two fighters are going to stand and trade, look no further. UFC lightweights Marc Diakiese (14-3) and Rafael Fiziev (7-1) is a fight that might just earn both a nice $50,000 bonus.

Diakiese comes into this fight on a two fight winning streak after losing three consecutive fights. He has drastically turned his career around after a real rough stretch between July 2017 and July 2018.

Diakiese has really good speed, flashy striking, and he’s shown in his last couple of fights that he’s got pretty good takedowns. Overall, Diakiese is someone who’s very entertaining and has the skills to back it up.

Fiziev is a little bit of a question mark for some fans. He came into the UFC undefeated, but he lost his debut in less than 90 seconds. He did bounce back against Alex White last October.

Fiziev is the kind of guy who wants to stand and trade. Coming into this fight, six of Fiziev’s seven wins have all come by knockout. He’s got a pretty aggressive style that he’s going to have to use in this one.

Diakiese is not at his best when he’s getting pressured. Fiziev is going to have to pressure him a lot in this one. However, I think Diakiese is on a higher level at this stage in their careers.

The second fight on the main card pairs up two UFC flyweights as Ariane Lipski (12-5) takes on Luana Carolina (6-1).

Lipski had a decent amount of hype behind her when she made her UFC debut back in 2019. She was really successful in KSW as champion. It has not been smooth sailing so far.

Standing across from her is Luana Carolina. Carolina won her debut last year after she appeared on Dana White’s Contender Series Brazil back in 2018.

The odds on this fight are close because the skill sets of both ladies is very similar. Lipski has fought much tougher competition at this stage in her career. I’m not 100% sure what to expect from Carolina.

I don’t think either woman is going to come out and completely dominate the other. You’ll see some back-and-forth on the feet where each fighter has their moments. I think if Lipski is able to get this fight down, she’ll have a pretty decent advantage on the ground.

In the end, I believe that Lipski is going to find a little more success than Carolina as the fight goes on. It’s not going to be a runaway decision, but I think Lipski does enough to get it done.

With the flyweight title being contested in the main event, you might be looking at the title eliminator in this opening fight.

There might not be a hotter spot in the world for MMA right now than Russia. The UFC has two Russian champions, and two top contenders that are one win away from a title shot in their divisions. Askarov is one of those contenders.

Askarov has really elite ground skills. There are no questions as to what he wants to do in this fight. He’s coming off of a good win against Tim Elliott back in January after fighting to a draw with Brandon Moreno in his UFC debut.

Askarov will try to use his striking to setup his takedowns. Again, it’s not hard to figure out what the game plan is for the Russian.

Pantoja is one of the best in the world at flyweight. He’s so good wherever the fight goes and he’s coming into this fight 4-1 in his last five fights.

His only loss is to the man who’s challenging for the title in the main event, Deiveson Figueiredo. Outside of that, he’s coming off back to back knockout wins.

If you’re Pantoja, you like this matchup because he has multiple ways to win. He has the power to knockout Askarov on the feet and he’s got good enough ground skills to hold his own if the fight goes there.

I really like Askarov as a prospect for this division, but I’m just not sold that he’s going to beat Panoja who’s proven he’s one of the best in the UFC. I’m going to go with Pantoja in this one.

The UFC‘s third card on Fight Island is a good one. There are some solid fights up and down there card, and we might crown a new champion (depending on weight). It should be a good night of fights for UFC fans everywhere.