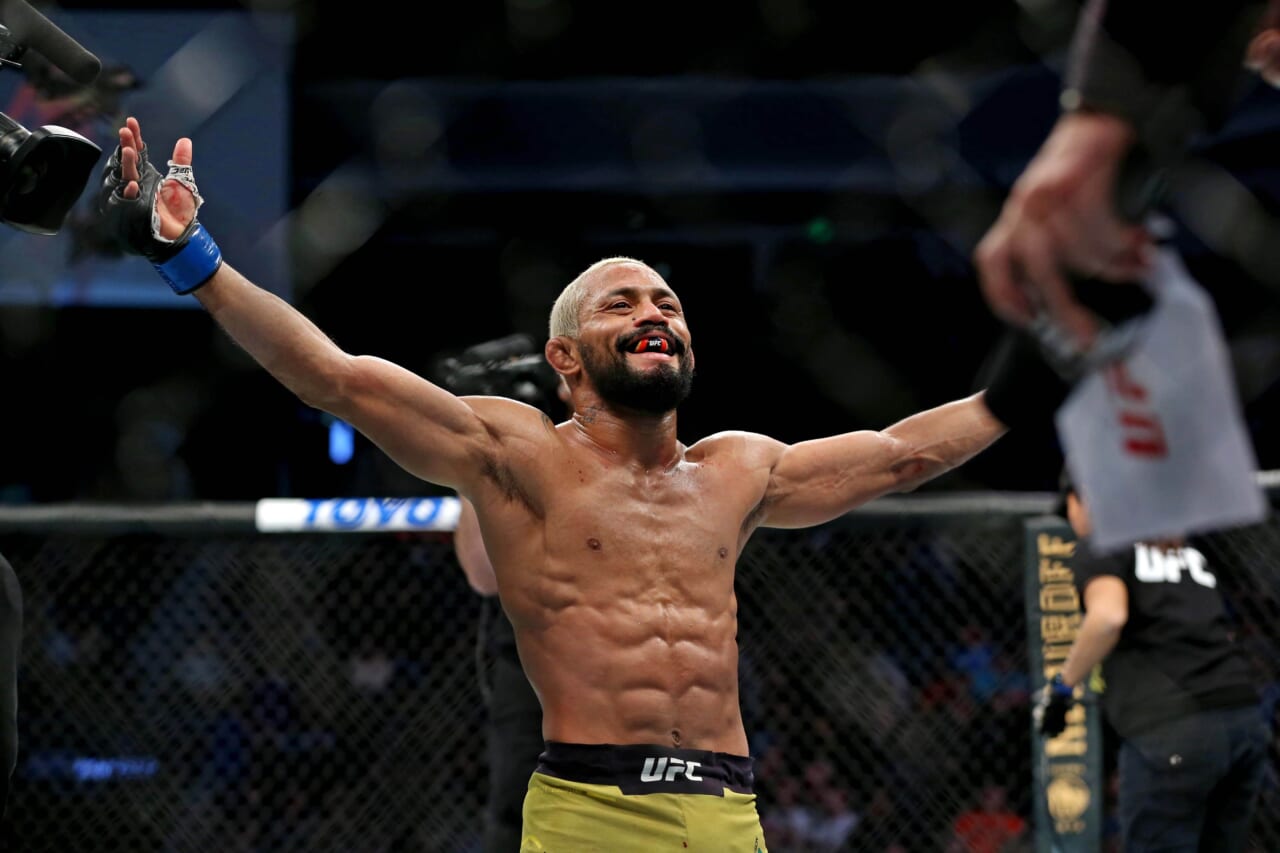 Tonight in the main event of UFC 255, the men’s flyweight title was on the line. Deiveson Figueiredo (19-1) was looking to defend his title for the first time against contender series veteran, Alex Perez (24-5).

Originally, Figueiredo was supposed to face former UFC bantamweight champion, Cody Garbrandt, in tonight’s main event. However, an injury to Garbrandt gave Perez the opportunity of a lifetime at championship gold.

Since fighting in the contender series a few years ago, Perez has only lost once in seven appearances in the UFC. He came into tonight on a three fight winning streak including an impressive TKO over Jussier Formiga in his last fight.

However, he had a tall order tonight in the flyweight champion. Figueiredo is an absolute monster and he’s really shown that in his last couple of wins. Figueiredo finished Joseph Benavidez twice in a row to capture UFC gold. He has all the makings of someone who can reign for a long time.

As the main event of UFC 255 got underway, Perez immediately opened with a big kick that missed. Figueiredo then landed a big power body kick to start the striking. Perez pushed forward with a combination but wasn’t able to land anything.

Figueiredo then landed a couple of additional big kicks. Perez shot in for a takedown and was working really hard to land it. Perez had Figueiredo’s legs high up in the air but then Figueiredo rolled for a leg lock.

Figueiredo couldn’t lock it in, and Perez ended up on top. However, he went right into a guillotine choke. It’s tight, but Perez comes close to getting out. Figueiredo locks it up even tighter and Perez is forced to tap.

Tomorrow night at UFC 255, the promotion is showcasing both the men’s and the women’s flyweight divisions. Both champions will defend their titles and in the main event of the evening Deiveson Figueiredo (19-1) takes on Alex Perez (24-5).

The fight will mark the first official title defense for the UFC champion, Figueiredo. Back in February, Figueiredo knocked out Joseph Benavidez in a fight that was supposed to be for the UFC title.

However, Figueiredo missed weight and the title wasn’t on the line. Figueiredo then fought Benavidez again in July for the title and ran through him after making weight. Deiveson Figueiredo looks like an absolute force at flyweight.

Figueiredo is very big for the weight class and he has great skills everywhere. He’s got good striking with tremendous power and he’s incredibly slick on the ground. Figueiredo can lull you to sleep with his deliberate pace but his long arms and power catches opponents off guard.

Standing across from the champion will be contender series veteran, Alex Perez. Perez earned his shot in the UFC back in 2017 and has only lost to Joseph Benavidez since in seven fights with the promotion.

Perez also has a very well rounded skillset and he has tremendous leg kicks. Back at UFC 250, Perez finished Jussier Formiga with a heavy dose of calf kicks. Perez definitely has the skills to put up a fight against the champion.

The UFC 255 main event should be a fun one for however long it lasts. Both Figueiredo and Perez are very well rounded fighters so I think it should be relatively even during some of the exchanges.

However, I think there’s a clear favorite in this one and that would be the champion. I’m expecting Perez to come out and try to start fast, but I expect Figueiredo to just be waiting and picking his shots.

There is no one at flyweight that possesses the power of Figueiredo. He also has this killer instinct and he seems to be taking his career seriously. I’m expecting Perez to have some moments early, but those will only come as Figueiredo is figuring out the fight.

Prediction: Deiveson Figueiredo by TKO – Round 2

UFC 255 was dealt a bit of a blow today. First reported by Combate and now confirmed by ESPN, Cody Garbrandt (12-3) is out of his title fight against flyweight champion Deiveson Figueiredo (19-1). Figueiredo will now defend against a new opponent.

The UFC‘s flyweight champion will now be taking on Alex Perez (24-5) per ESPN’s Brett Okamoto. Perez was already scheduled to be on the card taking on Brandon Moreno (17-5-1). However, Perez will now jump into the main event of the evening.

This is a tough blow for the former UFC bantamweight champion, Cody Garbrandt. Garbrandt had gone through a rough time over the past couple of years, but made a big return at UFC 250 where he knocked out Raphael Assuncao.

After that knockout victory, Garbrandt announced he wanted to move down to flyweight to try to capture a second UFC title. Garbrandt wasn’t the biggest guy at bantamweight, and he felt he could easily make 125. His title opportunity is going to have to wait now.

Have confirmed via sources, Cody Garbrandt is out of his 125 pound title fight against Deiveson Figueiredo on 11/21. Alex Perez will take his spot. First reported by Combate.

What a golden opportunity this has turned into for Alex Perez. Perez is currently ranked fourth in the UFC‘s flyweight rankings. He will come into this title fight at 11-1 in his last 12 fights. The only loss coming to Joseph Benavidez back in 2018.

Perez has earned this title shot however, he’s going to have his hands full with the UFC‘s flyweight champion. Figueiredo will be making his first title defense after dominating Joseph Benavidez for the second time back in July.

Figueiredo was able to capture the undisputed UFC flyweight crown by choking Benavidez out cold in the first round. It was the second time this year that Figueiredo had stopped Benavidez cementing himself as the best flyweight in the UFC.

While it’s not the main event everyone wanted, it will still be a very solid flyweight title fight for the promotion. A huge opportunity for Perez and another tough blow for Cody Garbrandt.