Yankees: Why game 2 is boom or bust for the Bombers 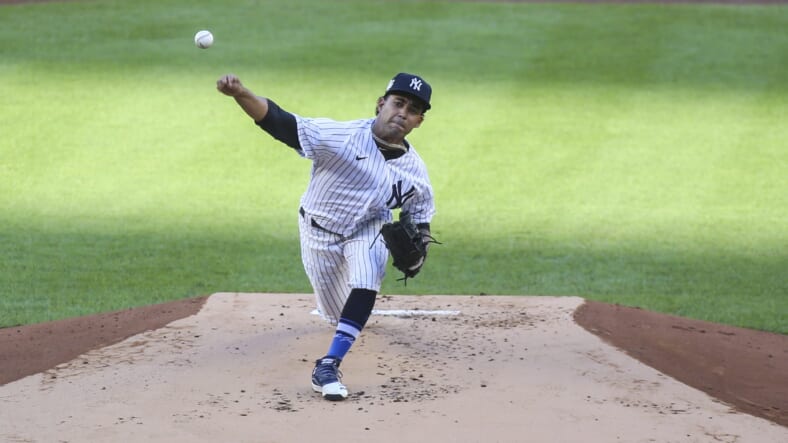 The New York Yankees made an emphatic statement with their 9-3 win in game one of the ALDS against the Tampa Bay Rays. Starting pitcher Gerrit Cole had another motivating outing, lasting 6.0 innings and giving up just three runs. He was hitting the 99 mph mark with nearly 100 pitches on the evening, attesting to his stamina and power.

However, the Yankeesâ€™ pitching wasnâ€™t their only strength, the offense showed up as well. While they only had four runs heading into the ninth-inning, slugger Giancarlo Stanton launched a grand slam to pull the Yankees ahead significantly. Five Yankees cleared the outfield wall, making it the first time in MLB history that a team has started the first three games of the postseason with 3+ homers.

Heading into game two, the matchup differential favors Tampa. With Tyler Glasnow on the mound, the Yankees have a tough challenge ahead of them. While he can be erratic with his pitches, he is a hard-ball style thrower and is dominant when on his game. The Yankees are set to utilize an inexperienced Deivi Garcia for game two, shifting Masahiro Tanaka over to game three.

The decision to push to Tanaka one game actually seems to be more analytical then degrading. Giving him an extra days rest at a pivotal point in the series is essential.

What should we expect from Deivi Garcia and the New York Yankees on Tuesday evening?

Garcia has made six appearances in the MLB this year, hosting a 4.98 ERA. Over 34.1 innings, he has allowed 19 earned runs, 35 hits, and struck out 33 batters. He has been solid for his first year in the majors, and manager Aaron Boone starting him in the postseason is a major sign of confidence.

Considering his inconsistencies during the regular season, this is a boom or bust decision for the Yankees, which either could be fruitful or result in a disappointing defeat. The offense has to be active and offer run support, but we know Garcia is capable of shutting down opposing teams.

Taking a look at Garciaâ€™s most frequent pitches, we should expect to see plenty of fastballs and a blend of sliders, curveballs, and change-ups. He uses his fastball 59.6% of the time, hovering in the 92 mph range. However, his most lethal pitchers are his curveball and change-up, so I anticipate Garcia sprinkling those in a bit more frequently than before.