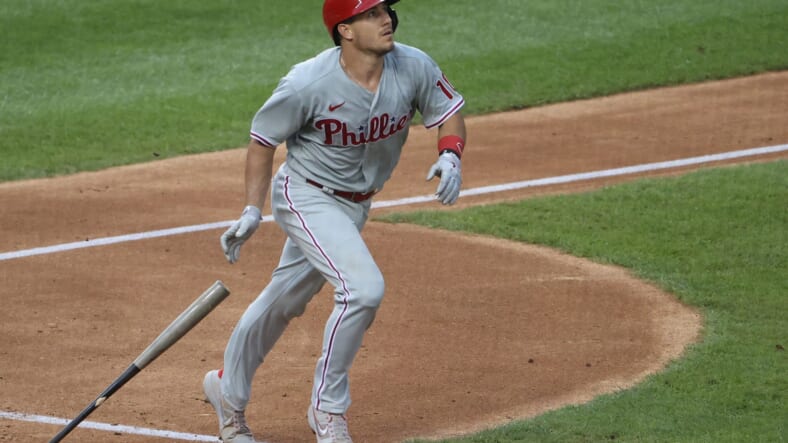 The New York Yankees finished the postseason with Kyle Higashioka, a career 55 wRC+ hitter, as their starting catcher. The experiment started after it was clear that ace Gerrit Cole felt more comfortable throwing to him than to Gary Sanchez, the former regular at the position. And given that the Kraken could never really get going at the plate (.147/.253/.365, a .271 wOBA and a 69 wRC+) Higgy ended up eating nearly all of his playing time.

Now, there is officially a catching controversy in the New York Yankees. Should they start Higashioka and his superior defense and blocking skills? Or should they ride Sanchez’s slump and try to get him going, knowing that he’s got by far the most offensive potential of the two?

How about a third option: should the Yankees pursue a free agent? Philadelphia Phillies’ J.T. Realmuto is without a team and remains excellent at the plate and behind it (an average of 5.0 fWAR between 2017 and 2019 and a 1.7 mark in the short 2020 season) but he may not be too interested in coming to New York.

Jim Salisbury of NBC Sports Philadelphia wrote on Tuesday that Realmuto is expected to draw interest from both New York teams, the Mets and the Yankees. The Mets, in particular, could make a play thanks to their direct need in the position (they declined to pick up Wilson Ramos’ option) and Steve Cohen’s deep pockets.

Could the Yankees make a play for him?

However, the Yankees might be interested as well given the unclear situation with Higashioka and Sanchez, especially if they choose to trade the latter (highly unlikely.)

Says Salisbury: “According to a person close to Realmuto, the catcher, an Oklahoma native, would like to remain in Philadelphia and is not particularly keen on playing in New York. However, if that’s where the record-setting money is, Realmuto will eat heroes instead of hoagies.”

From his words, we can process that Realmuto, while he may consider the highest bidder, will prefer to re-sign with the Phillies instead of coming to the Big Apple.

It’s still highly unlikely that the Yankees are in a position to offer Realmuto the max contract he is looking for. The Mets would make more sense. However, if they are not the highest bidders, he may not be willing to come to New York.