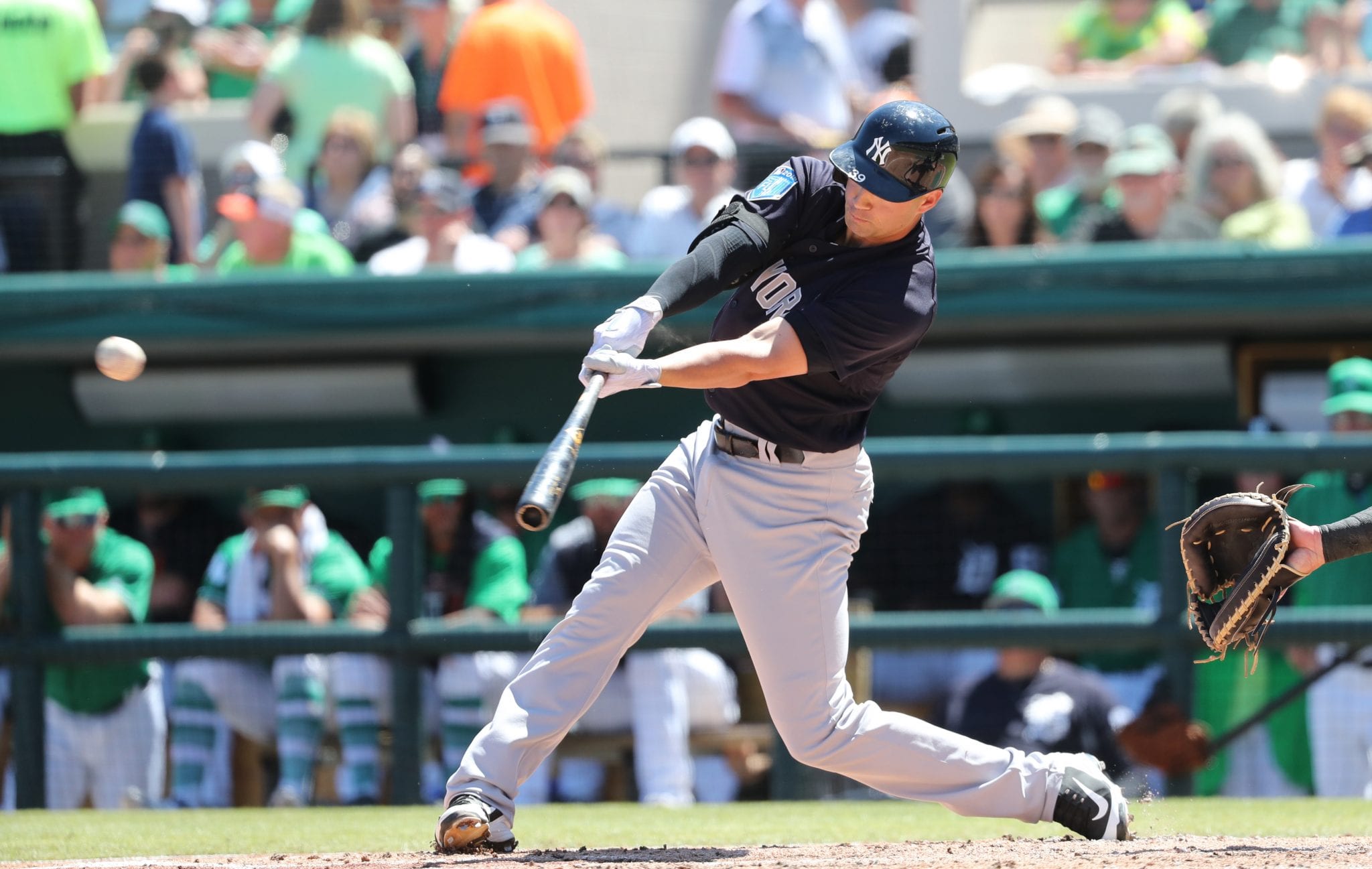 Yankees’ Tyler Wade and Clint Frazier go out of the park with back to back home runs in the Yankee  7-1 win over the Rays!

Yankee fans today at George M. Steinbrenner Field in Tampa, Florida, felt a chill in the air, and it wasn’t from the Tampa Bay Rays.  The game-time temperature was just 58 degrees, but it was mostly sunny for the Yankees as they started the game with J.A.Happ pitching.  Happ, in his first appearance last weekend, pitched two clean innings while striking out three.  Happ was challenged by Ray’s pitcher right-hander Aaron Slegers.  Looking around the stands, most fans donned jackets two protect against the chill and heavy breezes.

Happ started by getting two line-drive outs with just seven pitches but then allowed Daniel Robertson a liner to bounce into the bullpen for a ground-rule double.  Choi followed with a bloop single driving in Robertson for the Rays 1-0 lead.  Happ limited the damage by striking out Nate Lowe.  Brett Gardner led off for the Yankees in the bottom of the first. Brett faced Slegers who is one of the tallest pitchers in baseball towering over Aaron Judge by three inches at 6’10”.  Gardner Struck out.  Next up returning from a core muscle injury that sidelined him from the second half last season, Luke Voit walked.  Tyler Wade deposited a two-run towering shot out of the park for the 2-1 Yankee reversal.  Clint Frazier at the plate hammered one to left field and out of the park.  Higashioka flew out. Chris Iannetta finished getting the third out in a three-run inning for the Yankees.

Happ back out for the second got three quick outs.  Slegers also returned for the second and got Rosell Herrera to pop out.  Zack Granite stuck out, followed Thairo Estrada grounding out for a fast inning for both pitchers.  Happ was again out for the third. Walls and Margot both grounded out, and Lowe struck out with Happ putting down the last seven Rays hitters.  Josh Fleming replaced Slegers in the bottom of the frame.  Gardner worked a ten pitch walk.  Voit reached on a fielder’s choice, and then Wade bunted for the fielder’s choice. The speedy Wade stole second; he then stole third as Frazier walked.  Higashioka killed the Yankee threat by grounding out to the left.

In the fourth, prospect Michael King replaced Happ getting Robertson to lineout to Voit.  Choi flew out, and Lowe hit a line drive mishandled by Frazier as he threw off-center, allowing him to be safe at second. LaMarre lined back to King for the third out.  The Rays put Fleming back out for the bottom of the fourth.  Chris Iannetta singled.  Herrera ground out, moving Iannetta to second. Granite then doubled, showing terrific speed and driving Iannetta home as the Yankees took the 4-1 lead.  Estrada ground out moving Granite to third, and Gardner singled for an RBI, driving in Granite and giving the Yankees four-run lead.

King in the fifth allowed two singles and two outs before Lowe flew out to Brett Gardner, leaving two men on the corners for the Rays.  Wade against Sanders grounded out, Frazier grounded out followed by Thole pinch-hitting for Higashioka also grounded out for a quick inning for Sanders.  At the end of the fifth, it was Yankees 5 and the Rays 1.  Clarke Schmit, the Yankees No.1 prospect, took over for King, who pitched two scoreless innings.  Schmidt immediately gave a single to Robertson, Choi, grounded to Schmidt advancing Roberston.  Estrada made an excellent play tossing to Voit for the out.  Robertson to third. LaMarre then struck out, leaving Robertson on base.  In the bottom, Zombro faced Iannetta, who struck out.  Herrera singled. Mike Ford pinch hit for Granite singled moving Herrera to second.  Estrada was retired by a long fly out to the left. Thomas Milone, the former Ray, trying to make a name for himself as a Yankee, worked the count full before grounding out keeping the score at 5-1 Yankees.

Top seven, it was Schmidt on the mound for his second inning, which he pitched scoreless.   At the bottom, Zombro quickly put down two Yankees, before he walked Thole.  Zack Zahner went down looking to end the seventh.   Jonathan Loaisiga handled the Rays with a ten pitch eighth.  Deck McGuire pitched the bottom for the Rays.  Alverez got a ground-rule double down past first. Mike Ford, still in the game, hit a long homer into the centerfield stands.  Cabrera flew out. Milone ground out, and Kratz made the final out, but the Yankees picked up two runs off Mike Ford’s homer.

The final inning found Loaisiga on the mound to close out the game, and he did it swiftly, putting down the side for the Yankees 7-1 win over the Rays.  J.A. Happ was the winning pitchers, and Aaron Sleger taking the loss for the Rays.  The game was played economically in two hours and twenty-two minutes.

The big take-a-way from today’s game is, of course, back to back out of the park home runs by Tyler Wade and Clint Frazier.  But watching the game, it must have pleased Yankee pitching coach Matt Blake to see all of his pitchers, pitch quickly and confidently.  The good news for the Yankees is that J.A. Happ, in his first two outings, pitched without hesitation, allowing only one run over five innings.