Yankees: The pressure is on for Gerrit Cole after coming up short in 2021 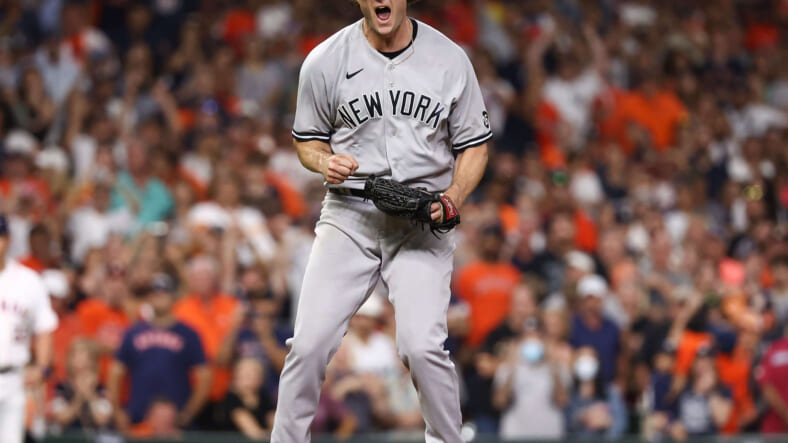 There is no question that Gerrit Cole was the New York Yankees‘ best pitcher last season. In fact, he has been one of MLB’s best pitchers over the previous four years. But has he been everything that Yankees fans want him to be? No, he hasn’t.

Gerrit Cole had a ton of success in his two years with the Yankees with a 23-11 record and a 3.11 ERA. He finished second in the AL Cy Young Award voting in 2021 and was an All-Star. The problem for the Yankees is that Cole wasn’t hired to be the best pitcher on the staff, he wasn’t hired to get the Yankees to the postseason, he was hired to win a World Championship for the Yankees, in that charge, he failed miserably during his first two seasons.

So far, Cole has not demonstrated that he can be the pitcher for the Yankees that he was in his two years with the Houston Astros.

It would not matter what team he was playing for; Cole would be one of their best pitchers. But being an ace for the Yankees comes, like it or not, with a directive, win us a championship.

Last season the Yankees struggled mightily, losing the division but finally getting a Wild Card berth. So, of course, Cole would be expected to be that starting pitcher in a winner takes all situation.

This should have given the Yankees a considerable advantage against Nathan Eovaldi.

So what did Cole do against the Boston Red Sox?

Cole, rather than being the biggest difference-maker for a victory, he basically lost the game for the Yankees. He only lasted two innings, allowing two home runs for a total of a three-run advantage for the Red Sox before being yanked off the mound and replaced by Clay Holmes, who went two innings, not allowing a run.

To say that Cole’s performance was disappointing is a complete understatement. Cole was paid to be a difference-maker. Any junk pitcher could have done what Cole did. Instead, it was simply unacceptable, proving that he still has something to prove to Yankee fans.

However, in his defense, he didn’t lose the game for the Yankees solely. The Yankees didn’t hit as they should and didn’t play the kind of baseball that wins championships. The usually dependable Jonathan Loaisiga gave up another two runs, with Luis Severino giving the Red Sox their sixth run. The Yankees didn’t play any small ball, so when Anthony Rizzo and Giancarlo Stanton hit their home runs, no one was on base. It was too little too late. By the way, it also didn’t help when third-base coach Phil Nevin sent Aaron Judge home only to be called out by a mile.

Gerrit Cole has proven that he can be a dominant pitcher at times, but he has to be consistent, and he has to be at his best in crucial situations like the postseason. If you’re outstanding in the regular season but fail in the postseason, your performance as a Yankee is irrelevant. If Gerrit Cole wants to be showered with Yankee love, he has to be better. He has never won a Cy Young Award or a World Series, but he can do that with the New York Yankees. But, until he does that, he still has much to prove to Yankee fans.

EmpireSportsMedia.com’s Columnist William Parlee is a Society for American Baseball Research member. You can follow him on Twitter @parleewilliam.