Yankees: The implications of using Gio Urshela as a backup shortstop 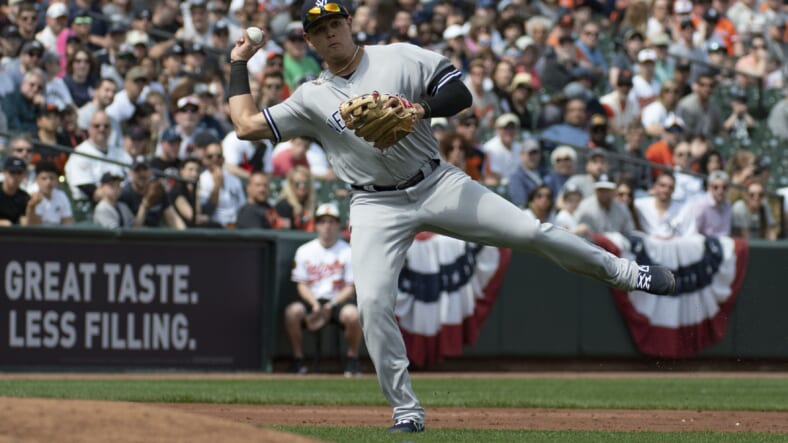 The New York Yankees recently deployed starting third baseman Gio Urshela at shortstop, as manager Aaron Boone wanted to see if he is capable of handling the position, which is the hardest and most demanding of the infield, in a pinch.

By all accounts, the talented infielder looked just fine out there, which prompts the question: what will the Yankees do with their roster construction if he can, indeed, serve as a backup infielder?

“It felt really good; better than I thought,” Urshela said recently to MLB.com. “I had two ground balls and I feel really comfortable. I’ve been playing a lot in the shift, so I feel really good for my first day.”

Boone seemed pretty happy with the results, too. “It’s something he’s pretty comfortable doing; same side of the field with shifts and all,” Boone said. “It’s something that I felt like I wanted to do this spring, just in case we ever get in a pinch or we’re in a situation where we need to move him over there for a day.”

Urshela certainly feels capable of playing all four infield positions if thatâ€™s what the Yankees need. “Whenever Boonie needs to use me, I’ll be there playing shortstop,” Urshela said. “I’ve played second base in the past before. I’ve played first a couple of times, so I’ll be ready to play any position when they need me.”

What will the Yankees do?

If Urshela can handle shortstop, then Tyler Wadeâ€™s roster spot would be in jeopardy. The Yankees have long liked Wadeâ€™s speed and defensive versatility, but he hasnâ€™t offered much with the bat yet in his big league tenure (.190/.274/.301 in 346 plate appearances.)

The Yankees are projected to have four bench spots in their Opening Day roster. Two of them are likely reserved for Brett Gardner and Kyle Higashioka.

Wadeâ€™s running prowess and defensive versatility gives him an edge, but if the Yankees want offense, they may use Urshela as a backup shortstop and keep Dietrich instead.

There are still a couple of weeks of spring training left, so the competition is on.