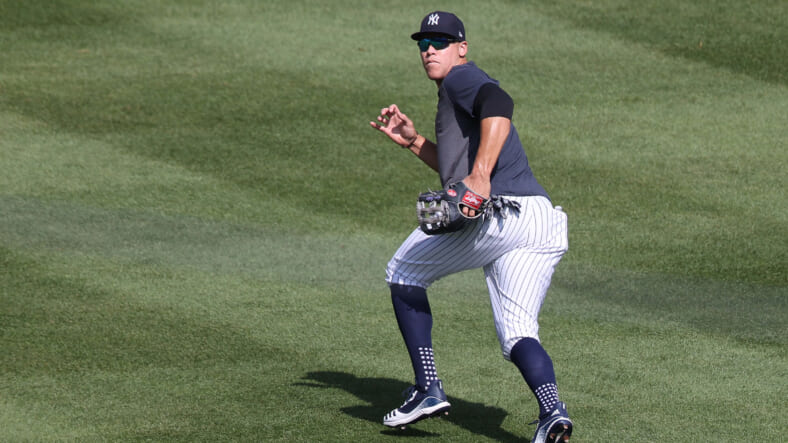 The New York Yankees have had to endure long stretches of play without their top two offensive stars in the last couple of seasons. Giancarlo Stanton and Aaron Judge have suffered injury after injury and havenâ€™t been able to play a full slate of games.

But Judge vows to prioritize smart play over going all in, with the intention of making sure he is out there helping the Yankees more often than not.

Judge reported to the Yankeesâ€™ spring training site this week with high hopes over a new season, one in which the Bombers will seek their 28th World Series ring.

â€œGetting kicked out in the [American League] Division Series is not what our goal is,â€ Judge said on Tuesday, per MLB.com. â€œItâ€™s not what we intended. â€¦ It starts in the regular season, keeping guys on the field, playing hard and winning our division. I think if we can do that and take care of business there, it sets us up for the postseason where anything can happen.â€

After dealing with lung and rib issues prior to the start of last season, the Yankeesâ€™ slugger lost some time due to a right calf strain that he later aggravated.

Judge has played in 242 of a possible 384 regular-season games since the beginning of the 2018 season. He has missed time with multiple issues, including oblique strains, the mentioned punctuated lung/cracked rib, and the calf strains, among others.

â€œOver the years, you learn to work a little smarter, not harder,â€ Judge said. â€œIf I get a better first read, a better first step, that might help me not to have to crash into a wall. With my big body, 275 [pounds] diving over 162 games, it does a lot of wear and tear. It comes back to just playing a little bit smarter.â€

The Yankees got Judge to reduce heavy lifting and doing yoga and other exercises.

â€œLast year I thought I was coming in healthy, but I played a whole [2019] postseason and worked out all offseason with a broken rib and a punctured lung,â€ Judge said. â€œIâ€™m excited to come in feeling great. Being 6â€™7â€ and 275 [pounds] is a little different than 5-foot-6 Brett Gardner and 150 pounds. Weâ€™ve got to do things a little bit different.â€