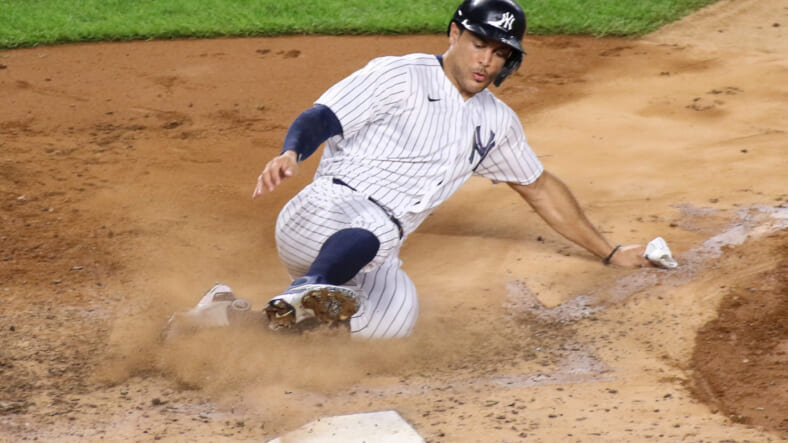 New York Yankeesâ€™ slugger Giancarlo Stanton is a different type of hitter when he is confident, and it shows. He will always be vulnerable to breaking stuff low and away, but even if thatâ€™s the case, he can punish baseballs at a torrid pace if he has mojo working. He has to believe he can be a special hitter, and right now, he is doing just that.

Stanton fueled yet another Yankeesâ€™ victory on Wednesday night, against the Houston Astros no less, by going 3-for-4 with a home run, a double, a run, and four RBI. It means he drove in more than half of the Yankeesâ€™ runs last night, as they won 6-3.

â€œI’m doing a great job on mistakes,â€ Stanton said. â€œIf a pitcher makes a mistake in the middle of the plate, Iâ€™m doing some damage on it. That’s our job, that’s my job. Some stretches you do better than others, but I’m in a pretty good one right now.â€

Stanton is carrying the Yankees

The mighty Stanton is batting .500 with five round-trippers and 10 runs in his current 11-game hitting streak. Before the hot run, he was hitting .158 and receiving boos from his home crowd. Now, he is at .314 and hearing â€˜MVPâ€™ chants from Yankees’ fans.

â€œHeâ€™s a special person and a talent,â€ manager Aaron Boone told MLB.com. â€œIâ€™ve been saying it for a couple of years: This has been coming. Itâ€™s just been about getting him on the field. We saw it in the playoffs last year and after a week or two slow start, the at-bats have just been so good night in and night out.â€

Yesterday, Stanton hit a two-run shot against Astros starter Luis Garcia in the third inning, and add RBI double and single later in the game. He is just in an impressive groove right now.

He made a mechanical adjustment recently. According to Bryan Hoch of MLB.com, he â€˜has stopped releasing his swing early and is remaining more compact. By waiting an extra beat, he said, he is no longer waving through those fat chances.â€™

â€œLuckily, it turned pretty quick,â€ he said. â€œIt’s tough when you’re climbing back from something for a month or two; you just feel like you’ll never get out of it. Itâ€™s still a long season ahead, so I didn’t climb out of anything. I’ve still got work to do.â€

If health cooperates, the Yankees have a serious MVP candidate on their roster.