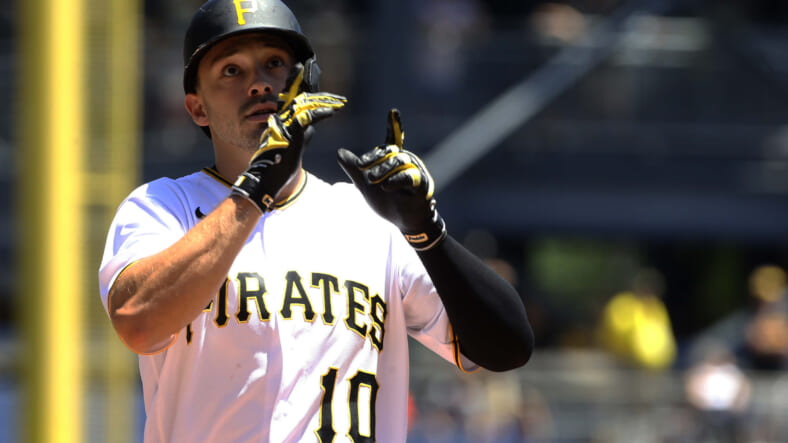 The New York Yankees have a big decision to make ahead of the trade deadline in the outfield: whether or not they should replace Joey Gallo.

Gallo has been awful this season as an offensive weapon, hitting a putrid .173 with nine homers and 18 RBIs over 207 plate appearances. Getting on base at a career-low 28.5% and slugging a measly .346, the Yankees shouldn’t have a problem deciding on Joey’s future with the team.

The question is, is there a team out there willing to trade for Gallo? He is under contract for the remainder of the 2022 season before becoming a free agent in 2023. Maybe the San Diego Padres are looking for a lefty slugger. They were interested before the season began after all.

The Yankees can go in a variety of different ways to replace Gallo, but one option that has bubbled to the surface is Pittsburgh Pirates star Bryan Reynolds.

Mark Feinsand of MLB.com believes Bryan Reynolds could be a perfect fit for the Yankees:

Reynolds’ name will continue to appear on lists of trade candidates for some time, as he remains under club control through 2025. But given the state of the Pirates’ rebuild and Reynolds’ recent play, GM Ben Cherington might find himself fielding very attractive offers. Reynolds got off to a dreadful start in 2022, but he’s been superb for the past month, slashing .304/.350/.563 in 29 games since May 25.

Reynolds hosts a .254 average with a 32.6% on-base rate, 12 homers, and 25 RBIs. His 23.7% strikeout rate has quickly been decreasing with great play in June. Offensively, he’s capable of providing fantastic production, recording a 38.3% hard-hit rate and 88.1 mph of exit velocity.

Defensively, Reynolds has spent time in center field and left field this season, earning a perfect fielding percentage in both. Theoretically, the Yankees could re-envisioned their outfield by acquiring Reynolds. They could transition Aaron Judge back to right field, inserting Reynolds in center, or do the exact opposite.

Aaron Hicks has voiced his displeasure over playing in left field to manager Aaron Boone, so he could move to right while Reynolds takes over in left, where he’s played 139 innings this season over 17 games.

The question is, how much would Reynolds cost the Yankees in prospects? The Pittsburgh Pirates have three years left of team control before Reynolds becomes a free agent in 2026. Acquiring him would cost an arm and a leg, specifically one of the team’s top young prospects and a package of notable players with upside.

It seems as if general manager Brian Cashman will take a more conservative approach at the deadline but expect rumors to be swirling as the Yankees look to make a World Series push after a phenomenal start to the 2022 season.